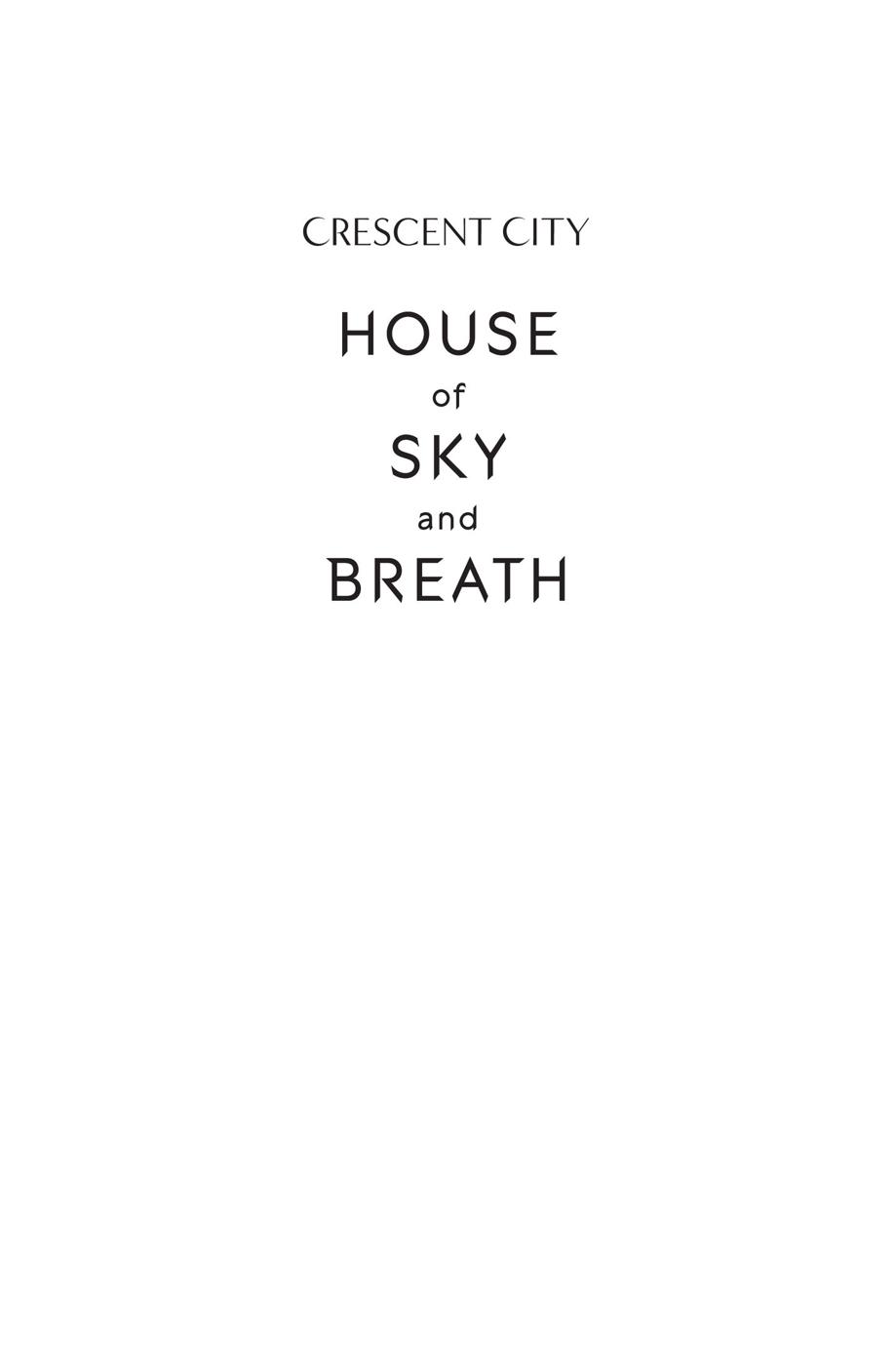 The Throne of Glass series

The Throne of Glass Colouring Book

The Court of Thorns and Roses series

A Court of Thorns and Roses

A Court of Mist and Fury

A Court of Wings and Ruin

A Court of Frost and Starlight

A Court of Silver Flames

A Court of Thorns and Roses Colouring Book

House of Earth and Blood

House of Sky and Breath 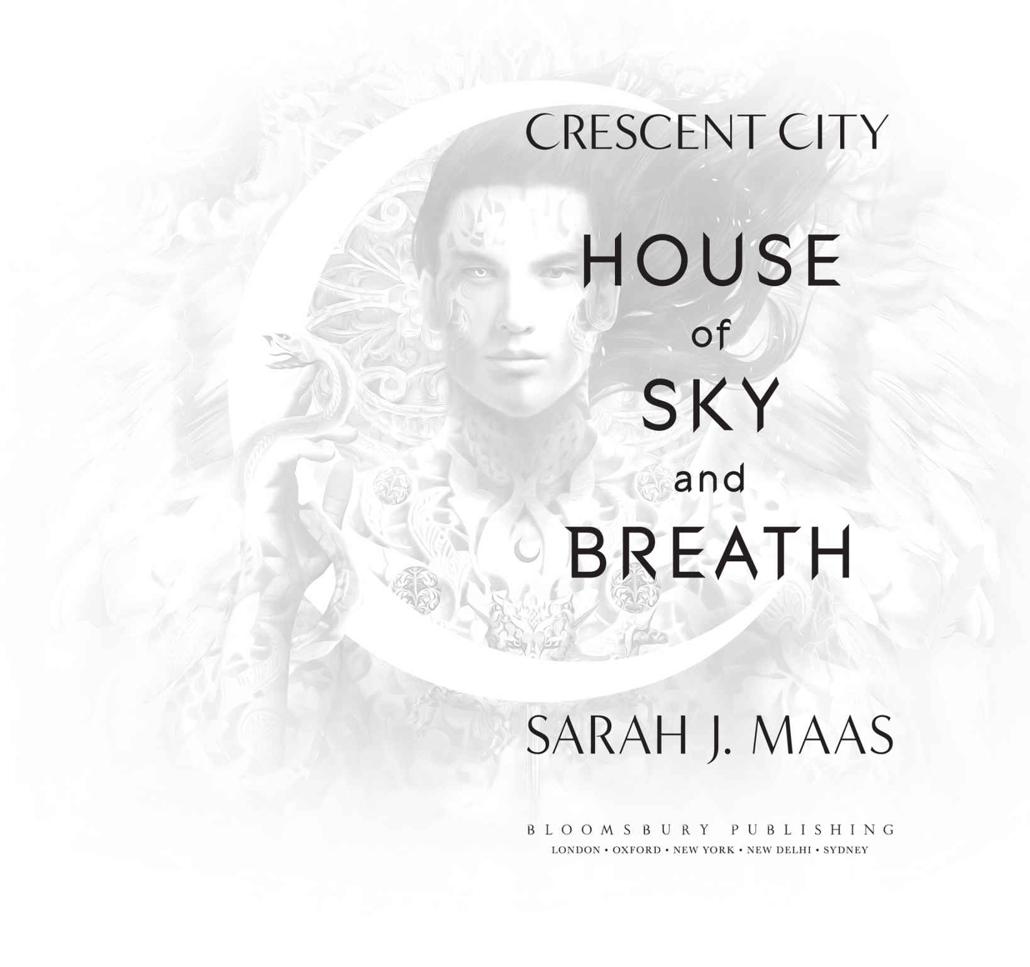 Part I. The Chasm 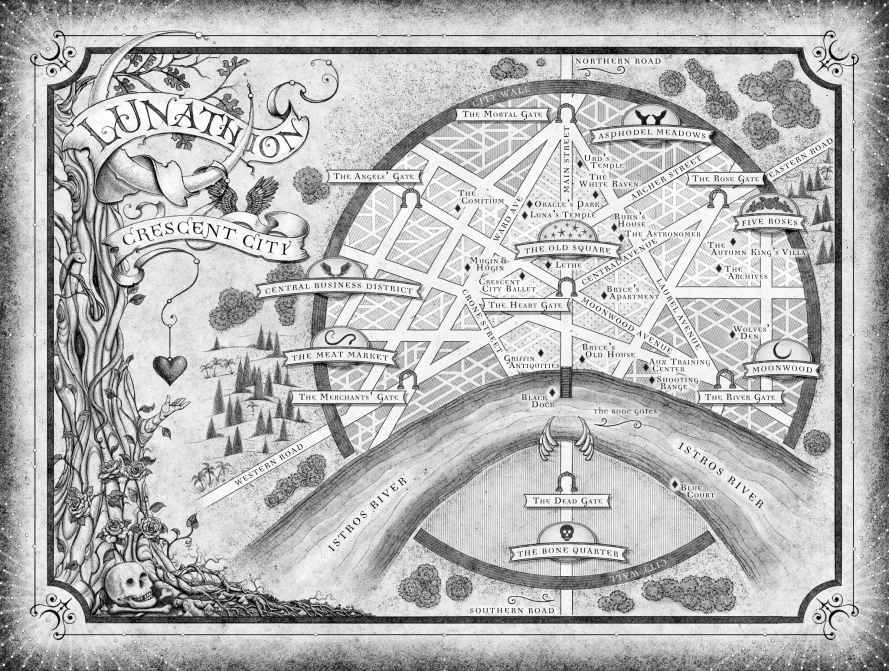 THE FOUR HOUSES OF
MIDGARD

As decreed in 33 V.E. by the Imperial Senate
in the Eternal City

HOUSE OF EARTH AND BLOOD

Shifters, humans, witches, ordinary animals, and many others to whom Cthona calls, as well as some chosen by Luna

HOUSE OF SKY AND BREATH

Malakim (angels), Fae, elementals, sprites,
*
and those who are blessed by Solas, along with some favored by Luna

HOUSE OF MANY WATERS

HOUSE OF FLAME AND SHADOW

Daemonaki, Reapers, wraiths, vampyrs, draki, dragons, necromancers, and many wicked and unnamed things that even Urd herself cannot see

*
Sprites were kicked out of their House as a result of their participation in the Fall, and are now considered Lowers, though many of them refuse to accept this.

Sofie had survived in the Kavalla death camp for two weeks.

Two weeks, and still the guards—dreadwolves, all of them—had not sniffed her out. Everything had gone according to plan. The reek of the days crammed into the cattle car had covered the telltale scent in her blood. It had also veiled her when they’d marched her and the others between the brick buildings of the camp, this new Hel that was only a small model of what the Asteri planned to do if the war continued.

Two weeks here, and that reek had become etched into her very skin, blinding even the wolves’ keen noses. She’d stood mere feet from a guard in the breakfast line this morning and he hadn’t so much as sniffed in her direction.

A small victory. One she’d gladly take these days.

Half of the Ophion rebel bases had fallen. More would soon. But only two places existed for her now: here, and the port of Servast, her destination tonight. Alone, even on foot, she could have easily made it. A rare benefit of being able to switch between human and Vanir identities—and of being a rare human who’d made the Drop.

It technically made her Vanir. Granted her a long life span and all the benefits that came from it that her human family did not and would never have. She might not have bothered to make the Drop had her parents not encouraged it—with the healing abilities
she would gain, it provided extra armor in a world designed to kill her kind. So she’d done it under the radar, in a back-alley, highly illegal Drop center, where a leering satyr had been her Anchor, and handing over her firstlight had been the cost of the ritual. She’d spent the years since then learning to wear her humanity like a cloak, inside and out. She might have all the traits of the Vanir, but she’d never
be
Vanir. Not in her heart, her soul.

Yet tonight … tonight, Sofie did not mind letting a little of the monster loose.

It would not be an easy journey, thanks to the dozen small forms crouched behind her in the mud before the barbed-wire fence.

Five boys and six girls gathered by her thirteen-year-old brother, who now stood watch over them like a shepherd with his flock. Emile had gotten all of them out of the bunks, aided by a gentle human sun-priest, who was currently serving as lookout at the shed ten yards away.

The children were gray-skinned, gaunt. Eyes too big, too hopeless.

Sofie didn’t need to know their stories. They were likely the same as hers: rebel human parents who’d either been caught or sold out. Hers had been the latter.

Pure dumb luck had kept Sofie out of the dreadwolves’ clutches, too—at least until now. Three years ago, she’d been studying late at the university library with her friends. Arriving home after midnight, she’d spied the broken windows and shattered front door, the spray paint on the siding of their ordinary suburban house—
REBEL SHITS—
and begun running. She could only credit Urd for the fact that the dreadwolf guard posted at the front door hadn’t seen her.

Later, she’d managed to confirm that her parents were dead. Tortured until the brutal end by the Hind or her elite squadron of dreadwolf interrogators. The report Sofie spent months working her way up through Ophion to attain had also revealed that her grandparents had been herded off upon reaching the Bracchus camp in the north, and shot in a lineup of other elders, their bodies left to crumple into a mass grave.