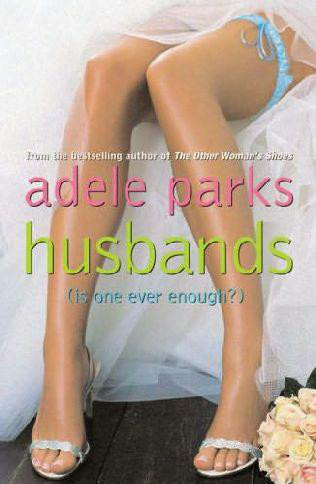 ‘Set against an intoxicatingly romantic background, this is another beautifully constructed multi-layered story with fine characterization’
Daily Record

‘A touching look at infidelity, love, and all the crap that goes with it’
New Woman

‘A modern fairy tale in the classic sense of the word: a story of wanting what you can’t have, filled with perils and beasts, with a moralizing punch to the inevitably doe-eyed ending’
Daily Mail

Adele Parks was born in Teesside, North-East England. She read English Language and Literature at Leicester University. Since graduating she has lived in Italy and Africa but has spent most of her adult life in London. She lives in Chiswick, with her husband and son. Her earlier novels,
Playing Away
,
Game Over
,
Larger than Life
,
The Other Woman’s Shoes
and
Still Thinking of You
, were all bestsellers and are published in over twenty different countries.

Except in the United States of America, this book is sold subject
to the condition that it shall not, by way of trade or otherwise, be lent,
re-sold, hired out, or otherwise circulated without the publisher’s
prior consent in any form of binding or cover other than that in
which it is published and without a similar condition including this
condition being imposed on the subsequent purchaser

For my husband and my sister

1. Tomorrow is a Long Time

2. One Broken Heart for Sale

3. I Need Somebody to Lean On

5. How’s the World Treating You?

9. I Really Don’t Want to Know

18. Tonight is So Right for Love

26. I Forgot to Remember to Forget

43. That’s When Your Heartaches Begin

47. Stranger in My Hometown

1. Tomorrow is a Long Time

‘Yes,’ says Amelie with a sigh. Her tone isn’t reassuring.

I press the red button on the handset and disconnect my lovely friend. I’m left with an overwhelming sense of inadequacy and grief. Grief is so lonely. It stains everything it touches and builds huge divisive walls. I should know, my mother died of cancer when I was nine. I will never stop feeling cheated. I’d wanted to say something meaningful, calming, consoling and true to Amelie but I couldn’t. I’ve tried to find those words for nearly ten months now but they don’t exist. Sighing with frustration I push my fists into the sockets of my eyes and rub hard. When Amelie called, I’d just finished my night-time round of pelvic-floor exercises and I’d gritted my teeth through eight reps of stomach crunches. I was mid my cleanse, tone and moisturize routine but now I can’t find the emotional energy to continue. All that vanity stuff seems so pointless in the face of Amelie’s pain.

Loving is such a risk.

I look at my husband, Philip, who has fallen asleep
while I was on the phone. He’s clasping a copy of
The Economist
. I turn on the bedside lamp and turn off the bright overhead light, ease the magazine out of his hand and kiss his forehead. I always love him even more after talking to my widowed friend; grief makes us selfish. I wish that every time I spoke to Amelie I didn’t think, ‘There but for the grace of God,’ but I do. Which probably means I’m not as nice a person as I’d like to be.

I nip around to my side of the bed, climb in next to Phil and hold tight to his strong, bulky body. My breathing slows down and I can’t feel my heart thud quite as furiously inside my chest. During my conversation with Amelie it raced so violently that I was convinced it was attempting an escape bid.

I often think my heart would like to escape.

Philip makes me feel safe. He’s nine years older than me, which is undoubtedly part of it. He is kind, respectful and thoughtful, even after sex. The men that I dated before Philip had not often been these things, even before sex. We met not quite two and a half years ago – I was working as a waitress in a cocktail bar, which makes me a tribute to a Human League song that I can barely remember but Philip enthuses about. An interesting dinner-party anecdote maybe, but working as a waitress in a cocktail bar is in fact a fairly grim existence. Philip is a highly successful City trader and while I’m not sure exactly what City traders do, I know that they get paid an awful lot of money to do it. So Philip charged into my life armed with the traditional gifts of dinners in fancy restaurants, flirty lingerie (wrapped in tissue paper and hidden in thick cardboard bags) and even the occasional
meaningful CD and book. He also brought with him a new array of courtship tools. He was a grown-up. Philip talked about ISAs, pension plans and stocks and shares with the same passion as other men talk about football league tables, PlayStation and bottled beer. He remembered stuff I found difficult to retain, like when the hunk of junk I called a car needed to be squeezed through its MOT, or if my household insurance needed renewing, and his DIY knowledge actively turned me on.

When I met Philip I was, I suppose, a bit of a mess. The most substantial thing about me was my overdraft and my most meaningful relationship was with my bank manager. In fact, thinking about it, I hadn’t actually met my bank manager, so my most meaningful relationship was with the girl at the call centre (probably in Delhi) who I rang regularly to explain my latest embarrassment.

It wasn’t as though I squandered money on designer labels and expensive lotions and potions. I didn’t own much; not a flash car or a property. Not even a shoe collection; hard to believe, when you consider that most women who have been brought up on a diet of
Sex and the City
and
Friends
think that a to-die-for shoe collection and wardrobe is, well… to die for.

It wasn’t as though I’d been idle. I’d worked pretty much every day of my life since I graduated with my middle-of-the-road degree. The problem was I hadn’t been consistent in my career progression. I had been on the bottom rung of several career ladders but had never clambered to the top of any of them. The thing is, I don’t know what I want to do or be. I try to view it positively that, after several years, I can confirm that I don’t want
to be an accountant (too many exams), a banker (I don’t like wearing suits), a calligrapher (anyway there isn’t much calling), a dental hygienist (other people’s mouths – yuk), something in PR or anything in the music industry. I still think being a chocolate buyer for Selfridges might be good but the opportunity has never arisen.

In fact fewer opportunities arise as the years pass. On leaving university starting and failing to complete one graduate trainee programme is acceptable but after several years of failing to finish any trainee programmes, potential employers became wary of what they (rightly) identify as my inability to commit.

I’d been seeing Phil for nineteen months when he popped the question. I like to round up and say two years; it sounds more… appropriate. Actually, he sort of blurted it rather than popped, in a very un-Philip moment. If I was a betting woman I’d have put money on Phil being the type of man to propose in a controlled environment, like a restaurant or in front of some significant building or beautiful sunset. I’d have guessed that he’d buy a ring in advance, go down on one knee and recite a rehearsed speech asking me to do him the honour etc etc. In fact he yelled over gushing water (he was wearing Marigold rubber gloves at the time). I think his exact words were, ‘We’d better get married before you cause any more trouble.’ How could a girl resist?

At the time I was flat-sitting for a flamboyant and wealthy fashion designer friend of Amelie’s, while she flittered around the globe to be inspired by spices in Morocco and sunsets in Cape Town, or similar. She had exactly the sort of job I could see myself being good at,
even though I wasn’t sure what she did, it didn’t even sound like work to me (undoubtedly part of the attraction). Real work, as far as I am concerned, is a series of dull temp jobs and late-night shifts serving cocktails to wanker bankers.

Blood of the Earth by David A. Wells
The Winner Stands Alone by Paulo Coelho
Pleasure Me by Burns, Monica
Tales of Natural and Unnatural Catastrophes by Highsmith, Patricia
Out of the Blues by Mercy Celeste
Of Gaea by Victoria Escobar
Mercy's Danger: Montgomery's Vampires Trilogy (Book #2) (Montgomery's Vampires Series) by Sloan Archer
The Cinderella Murder by Mary Higgins Clark, Alafair Burke
Distraction by Tess Oliver
On a Killer's Trail by Susan Page Davis
Our partner