Read I Am Not Junco Omnibus: Books Four - Six Online

I Am Not Junco Omnibus: Books Four - Six 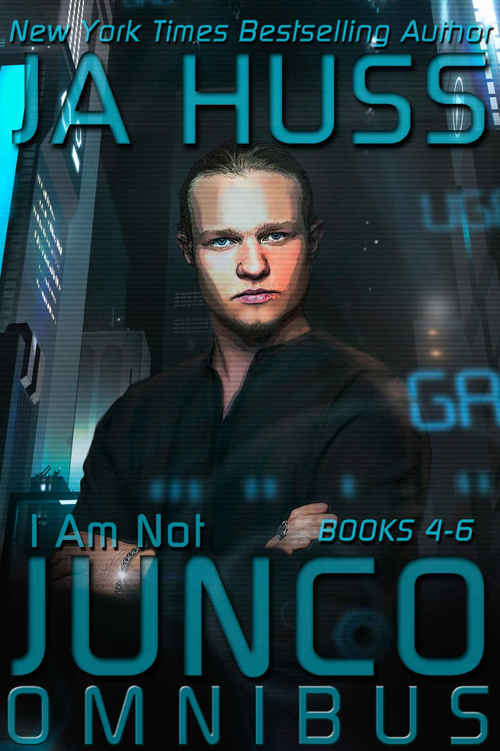 I Am Not Junco

I Am Not Junco, Book Four

Two years have passed since Inanna stole Junco away from Lucan.

Lucan rescued her, but now Junco has to learn to live with the consequences. Her Siblings are bitter and angry, half her team is dead, Tier is on a rampage building a weapon to fight the High Order, Gideon is planning his own private war of the worlds and Lucan is holding his secrets close again. Even as her Destiny is rushing up to meet her, Junco is slipping into insanity.

Junco Coot is back, but the world is about to wish she wasn't.

Peak City basks in the glow of dawn, all the natural color washed out of the high-rise buildings that wind their way up the side of the mountain, replaced with a hazy orange that reminds me of sherbet. The Goat lurches a few times as I pick up speed to enter the tunnel that will shuttle me through the mountain and into the valley where I have an appointment with death.

I've never been sanctioned to work outside my father's explicit instructions but life has changed considerably in the past few months. Mrs. Strauss showing up at the house to take me back to school a week early, my father not being home all summer, no birthday week, Gideon went missing, and HOUSE's cryptic message that led to this opportunity. All weird shit that's been screaming at me to prepare.

And that's exactly what I'm gonna do.

Prepare. For the fucking shit to hit the fucking fan because I can feel it. It's definitely coming.

The road twists after I leave the tunnel and I guide my aging vehicle onto an almost hidden dirt track. I'll leave tire marks but it's pretty windy today. I'm confident that the dust will swirl and scatter long before anyone enters this forest with forensic equipment, so I don't give a shit.

Let them figure out who killed the Peaks mayor. Like I care. I could kill him from point-blank range at high noon during the Patriots' Day parade and probably get away with it.

All I want is the biometrics so I can get the connection as payment because I need what they have.

I turn off the main track at the 13.28 mile mark and I lurch up and down as the pine needles reach out and slap the side of the Goat.

My smile brightens as I pull out into the clearing and spy the swirling eddy, then swing around and mow down several saplings to partially conceal my vehicle. They'll see that too, the way I flattened the aspens. But fuck it.

I brought just enough supplies to get me through this job and a possible firefight on the way out and that's it. Ten rounds for the rifle, a TZi with four pre-loaded ten-shot mags, and a bottle of water. I check my timeclip and hoof it downstream another quarter of a mile, then find the tree I scoped out last weekend and climb.

The pine resin sticks to my hands as I make my way to the proper bough, another possible giveaway that I am the shooter if I am caught, but again—who fucking cares?

My timeclip buzzes against my skin and I check upriver.

He's busy navigating the rapids and the kayak is being jostled this way and that, just like every other time I've seen him out here. He's not really great at this kayaking stuff. I mean, he's been practicing this stretch of river for two months if I believe what they told me.

And I do believe them. They have a look about them that says ‘we know shit’.

So, yeah. He's not that great at kayaking because even I could navigate this baby-ass, wannabe whitewater and I've only been kayaking a few times.

I take out my rifle, don't bother with the bipod, just brace Big Boy against the tree limb, and scope my ticket to freedom as he weaves his way towards death.