Read I Drink for a Reason Online

I Drink for a Reason 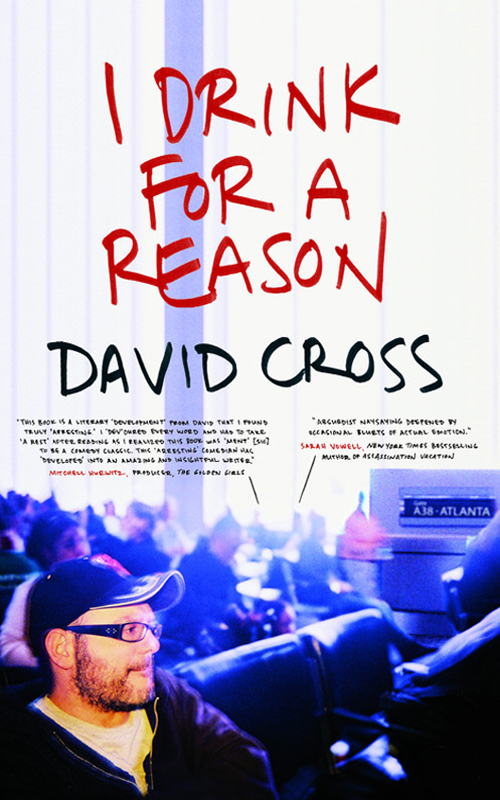 “We Have Got to Stop Calling People ‘Heroes,’ ” “Oh, I Forgot You Could Do That,” and “For the Love of God!” were previously
published in
Vice
magazine and are reprinted with permission.

“Letter from the Future” originally appeared in
Playboy
magazine under the title “Dear Friends, Get Me the Fuck Out of Here” and is reprinted with permission.

“Top Ten CDs to Listen to While Listening to Other CDs” is reprinted courtesy of Pitchfork Media.

I couldn’t have done it without you.

But It’s Good for You!

I Think Rich People Are Boring

I Ain’t No This or That

A Non-Sponsored Look at Holidays in America

The Mystifying Allure of Gratuitous Luxury

I Would Be the Shittiest Survivor in History

A Little Bit about Me, ’Cause It’s My Book

A Free List of Quirks for Aspiring Independent Filmmakers

Sitting on a Pole Trying to Win Some Money

The Five People You Meet in Limbo

Ideas for T-shirts to Be Sold at Urban Outfitters

In Anticipation of Reading This Right Now

A Short Request to Lame Friends

Things to Do When You Are Bored

The Golden Age of Cowardice

How to Play “Mafia,” the Funnest yet Most Unnerving Game Ever Invented

I Don’t Have Children

Top Ten CDs to Listen to while Listening to Other CDs

An Open Letter to Larry the Cable Guy

We Have Got to Stop Calling So Many People “Heroes”

Oh, I Forgot You Could Do That

For the Love of God!

Letter from the Future

H
ELLO
. T
HIS PREFACE WAS ORIGINALLY ONE HUNDRED AND NINE
pages long and one hundred percent unnecessary. But a contract is a contract. Especially if it’s legally binding and written
in lamb’s blood on parchment from olden times. I love to write. And, at the very same time, I hate to write. It’s kind of
a pain in the ass and really impedes my video-game playing and completion. I’ve written in several forms—e-mails, award-winning
sketches, movies, Post-it note reminders to let the baby out, award-winning gravy-soaked possum biscuit recipes, instructions
on how to use the cable remote for guests, French lessons, “The Who’s #1” in drying cement—but never a book… until now. I
like very much the idea that I’m writing a book and by extension am now a “writer,” because let’s be honest, no one considers
sketch or stand-up “writing,” even though of course it is. But writing a book, well, that puts me in the same rarified air
as Voltaire or Sue Grafton or Tim LaHaye. The bitch of it all is that writing is at complete loggerheads with my desire to
not be writing right now. There’s a good reason I’m known for having the “softest hands in showbiz,” and I am loathe to jeopardize
that title. It’s amazing what I will let myself be distracted by or pretend is suddenly important and urgently needs attending
to, merely so that I can put off, for however brief a time, the writing that needs to be done. For example, here’s a partial
list of things I’ve thought and ways in which I have dillydallied while trying to get this goddamn fucking pain in the ass
thing written:

I need to get ready for Thanksgiving.

My dog wants to play probably, I think.

Wait… do you hear horses?

I should really see if that wine’s still good. That shit’s not gonna drink itself.

Really? St. Louis is playing Pittsburgh? Huh, I should check that out. (I don’t care about either team in whatever sport you
first thought of.)

I swear to God I hear horses.

I should really think about doing twenty push-ups and then eventually not doing them.

Is that painting crooked?

This place is fucking dusty!

They’ll be calling any second now, and rather than get started just to have to stop, I’ll start writing after the call.

That call took a lot out of me. I’m wiped. Naptime!

That’s not to say I don’t want the riches and rewards that come with being a fancy-panted writer (“author,” on the East Coast),
although how this book will get written is still a mystery at this point. Perhaps an as-of-yet invented computer program called
“AutoWriter” or something like that will come about. Then I can just punch in a few lines and run it through the “Pithy” program
and that will be that.

I imagine that I will be asked to attend marvelous parties where witty bon mots and cutting retorts meet each other in midair
where they joust in a gentlemen’s game to the death. In fact I am quite sure that I will be feted at the rather large Upper
West Side co-op of someone I’ve never met but who will host my literary “coming out” party. Her name will be something like
Deidra Harwick, granddaughter of Knute Harwick and heir to the Harwick fortune. (Knute Harwick invented the non-disposable
condom, look it up.) She is very generous with her time and money. Just some of the numerous charities that she works for
include Operation Hang Upside-Down for Africa, Friends United to Eradicate Blind Indians, Society for the Improvement of
Performance Enhanced Athletes, and Diamondcology, to name a few. I can only imagine (’cause it hasn’t happened yet, silly!)
what one of these soirées would be like. First there’s the invitation. I suppose it’s creative and artsy. Perhaps a gilded
canary’s head with the script written in rubies and AOL stock certificates. It is most likely hand delivered by an old Punjabi
man with a sophisticated British accent. It comes at the bottom of a refreshing glass of Bombay gin over ice. “I
thought
that was a canary’s head!” I will say with delight as I drain the glass and break it just inches away from the Punjabi man’s
head. “Of course I accept this fine, fine honor. I will see you in one fortnight. Here’s a ha’penny for your troubles, good
sir.”

Then the big day arrives. Because I am so cool, I will ride my bike up to the imposing building, feigning ignorance that there
is a town car that they’ve sent waiting forlornly outside my East Village apartment. “Oh, shoot. Sorry about that, I had no
idea. I just rode my bike up here. No worries. It’s a beautiful night out, and I rode through the park. I liked it.” They
will now look on me as a “real” person with no pretense or shame.

Tight, elderly women will grab me by the arm and direct me toward various groups of well-behaved and turtle-necked adults.
“Look, there’s Joan Von Whistler, author of
And the Devil Went to the Bathroom.
She very much wants to meet you. And in the kitchen is Donovan Yeast. He wrote that wonderful
On a Winter’s Wind We’ll Ride: A Susan Gerber Mystery.
I will meet them all and look down at my shoes humbly, although I will be in quiet ecstasy. I will laugh softly and secretly
play with my erection through the hole in my pocket. Ha ha! That hole is from my nine-year-old pair of pants that I’ve kept
as a reminder of when I was poor and irresponsible. Now look where they are! In a rich lady’s kitchen! If my penis only knew!
I will entertain… no,
delight
strangers with true stories of my semi-tragic youth. My broken family. What it was like to be a poor Jew in suburban Atlanta.
Will there be any amongst them that can relate? Will someone step up and, through the use of a clever but not particularly
apt analogy, be able to capture what it was like for me in one pithy comment? If not, I will provide the analogy myself and
move on, in a feigned attempt at not wanting to make my hosts uncomfortable. “Yes, yes… who wants another Pimm’s Cup?”

I will of course be invited to accompany my new friends on their “little vacations” to all kinds of glamorous and colorful
locales. “No, I’ve never eaten a Plush Fruit before. I’ve never even heard of it,” I’ll say, resulting in overdramatic and
urgent inhalations followed by pleadings that I must promise that I will go with them on their boat to Guigjna Island, where
they have the best, THE BEST (!) Plush Fruit in the world. You can pick it right out of the basket that the local children
put all their just-picked Plush Fruits in after scampering down the tree trunks. I will be sort of a mascot for these Richie
Rich’s—the personification of their charity and largess.

Perhaps I will find myself in the middle of a bidding war between Grand Central Publishing and the Royal Family of Great Britain,
who, after reading this book, will offer me an honorary title ship and an all-expenses paid, ten-day muckabout in England
in exchange for writing a humorous calendar for them in which for each day there will appear something amusing to think about.
Example: “If your sister wears the same tampon to her wedding
and
your mama’s funeral… you might be a Redneck!” There would be an illustration to accompany the text in case of any potential
cultural misunderstanding. Well, enough wasteful daydreaming. Let’s write a fucking book, shall we (I)?

T
HE OTHER DAY
, I
WAS DRIVING ALONG BY MYSELF IN
L
OS
A
NGELES
. I was listening to NPR. An elderly woman from Macon, Georgia, was reading a story she had written for
Pecan Nights
magazine about a switch (Southern for “tree branch”) she had been made to bring to a teacher to enable the teacher to punish
her by beating her with it when suddenly the switch was turned to licorice by a forgiving and practical-joke-loving God. But
because she was old, she was taking FOREVER to read it! Her gravelly, halting voice was barely above a whisper, and she clearly
needed a drink of water. She sounded like when my mom eats bananas in silent anger. Why does NPR insist on letting its authors
read their own stories? Most of them are terrible. It’s painful and makes me anxious to listen to them. I slowed down as I
came to a light and pulled up alongside an L.A. cop driving his L.A. cop car. Like everyone else when faced with being next
to a potential bully with a Kafkaesque ability to get away with whatever they want (unless of course there’s an amateur videographer
nearby), I got a little self-conscious. I did what most people in cars do when they imagine cops are watching them. I fiddled
with my radio like only the innocent would ever do. People guilty of crimes, no matter how severe or petty, absolutely
never
adjust the settings on their radios. This is a proven fact
*
and one that has guided me through many of these episodes.