Read I Must Betray You Online

I Must Betray You 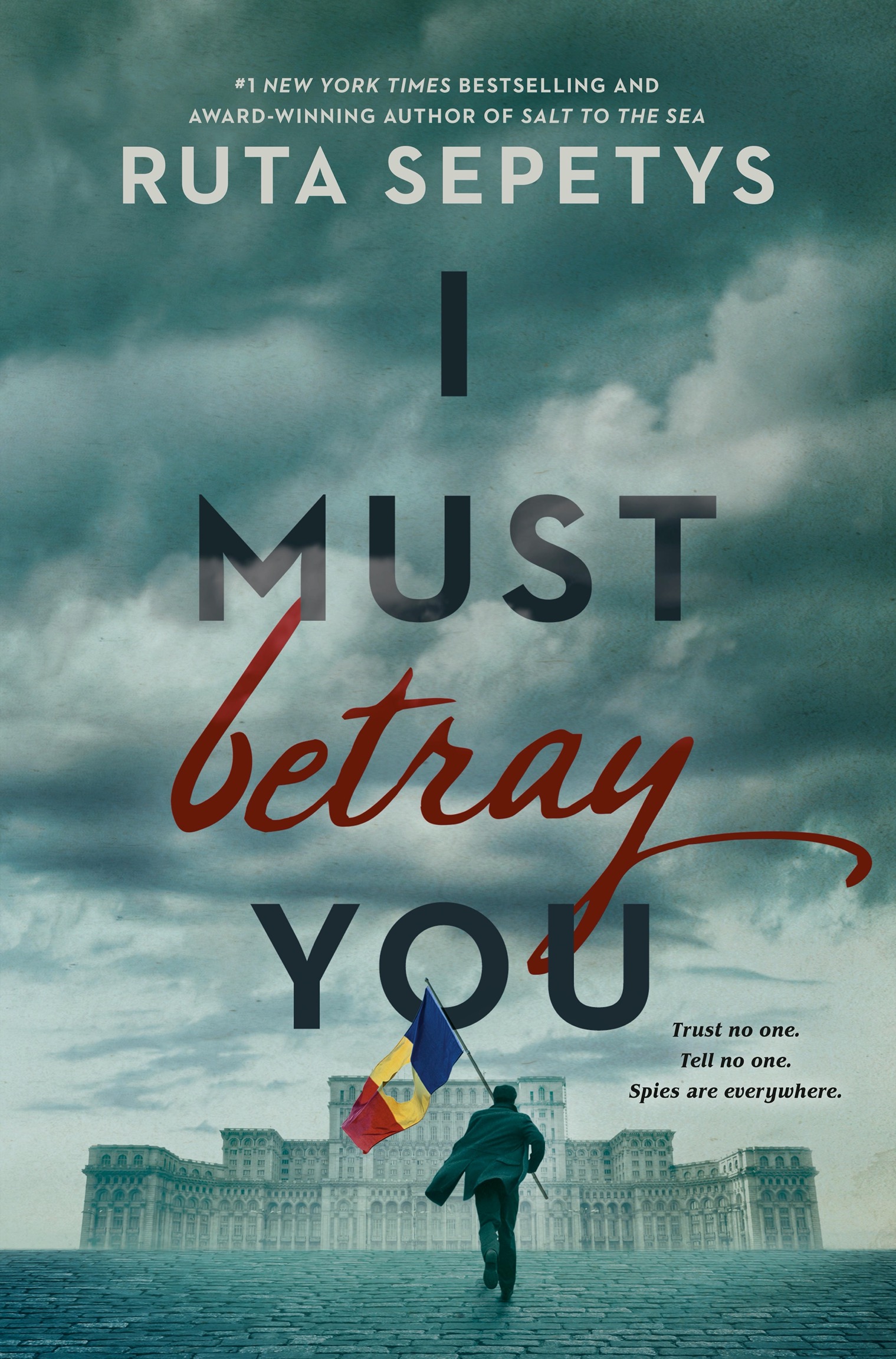 Between Shades of Gray

Out of the Easy

Salt to the Sea

The Fountains of Silence 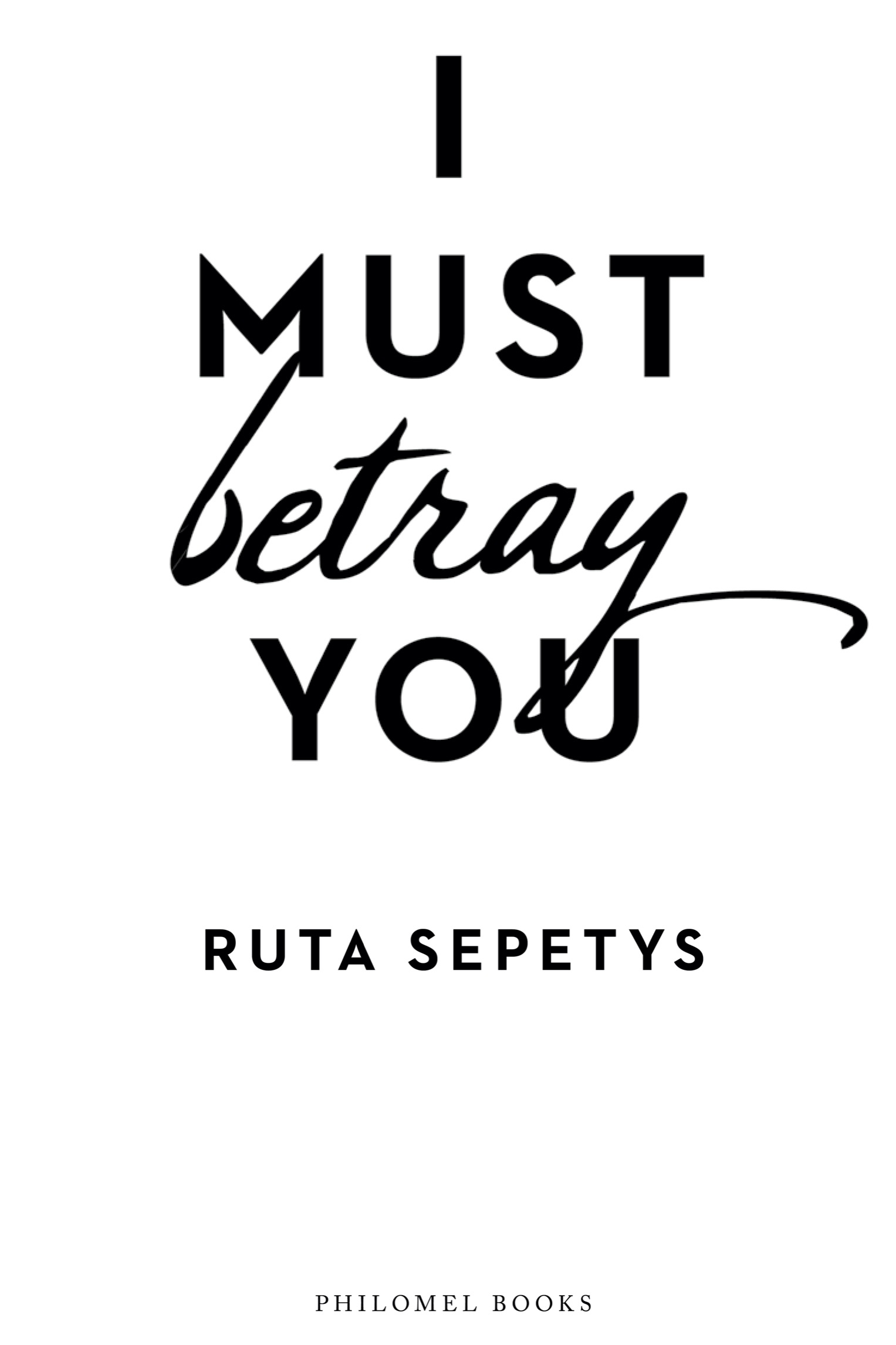 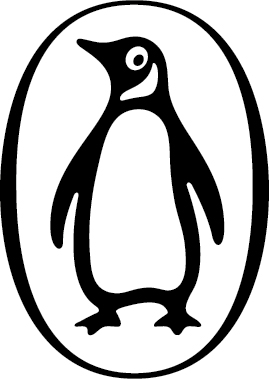 First published in the United States of America by Philomel Books,
an imprint of Penguin Random House LLC, 2022

Visit us online at
penguinrandomhouse.com
.

This is a work of historical fiction. Apart from the well-known actual people, events, and locales that figure in the narrative, all names, characters, places, and incidents are the products of the author’s imagination or are used fictitiously. Any resemblance to current events or locales, or to living persons, is entirely coincidental.

In memory of the brave Romanian students. 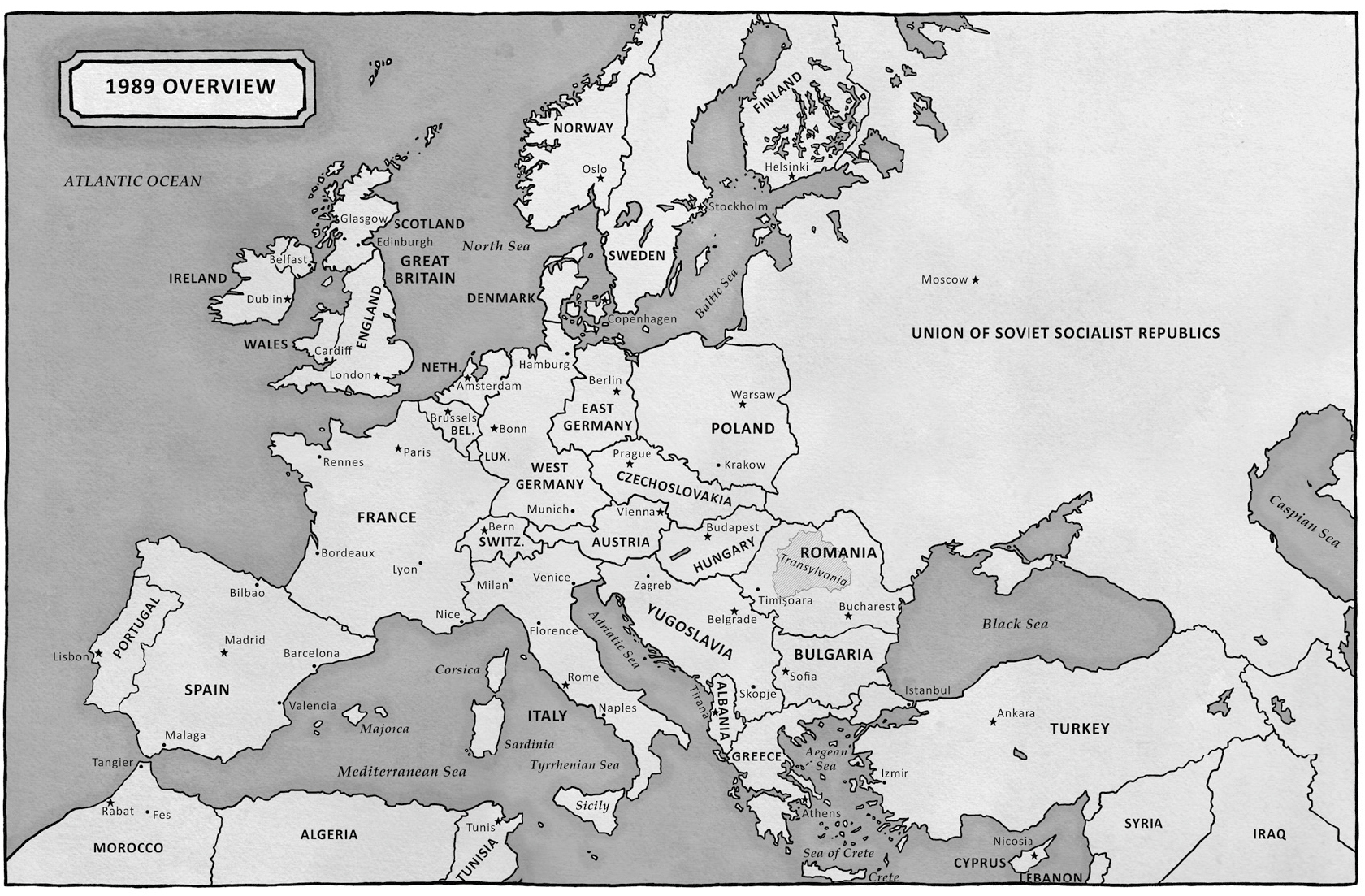 They lived in darkness.

They avoided the eyes of others. To look into the face of fear brought risk of getting trapped in its undertow. But somehowâinvisible eyesâthey were forever upon them. Even in the darkest darkness.

That's how it's been described: the burden of a secret storm.

This is not recited from memory.

There was a student, a young man in the capital city of Bucharest. He wrote it all down.

Then feared it was a mistake.

We speak of mistakesâsome believe that Dracula is the most frightening character associated with Romania. When they learn the truth, will it haunt them?

Dracula is fiction, with no real connection to Romanian history. But there was once a real bloodthirsty monster living in a castle in
Romania. He remained in his tower for twenty-four years. While Dracula chose specific victims, this other monster chose to be evil and cruelÂ .Â .Â .

He denied them food, electricity, truth, and freedom.

The citizens of Romania were stoic and resilient, but they suffered a terror of tyranny.

How many, you ask?

A metal box. Found next to a grave. Inside was a manuscript.

This is how one boy told the story. 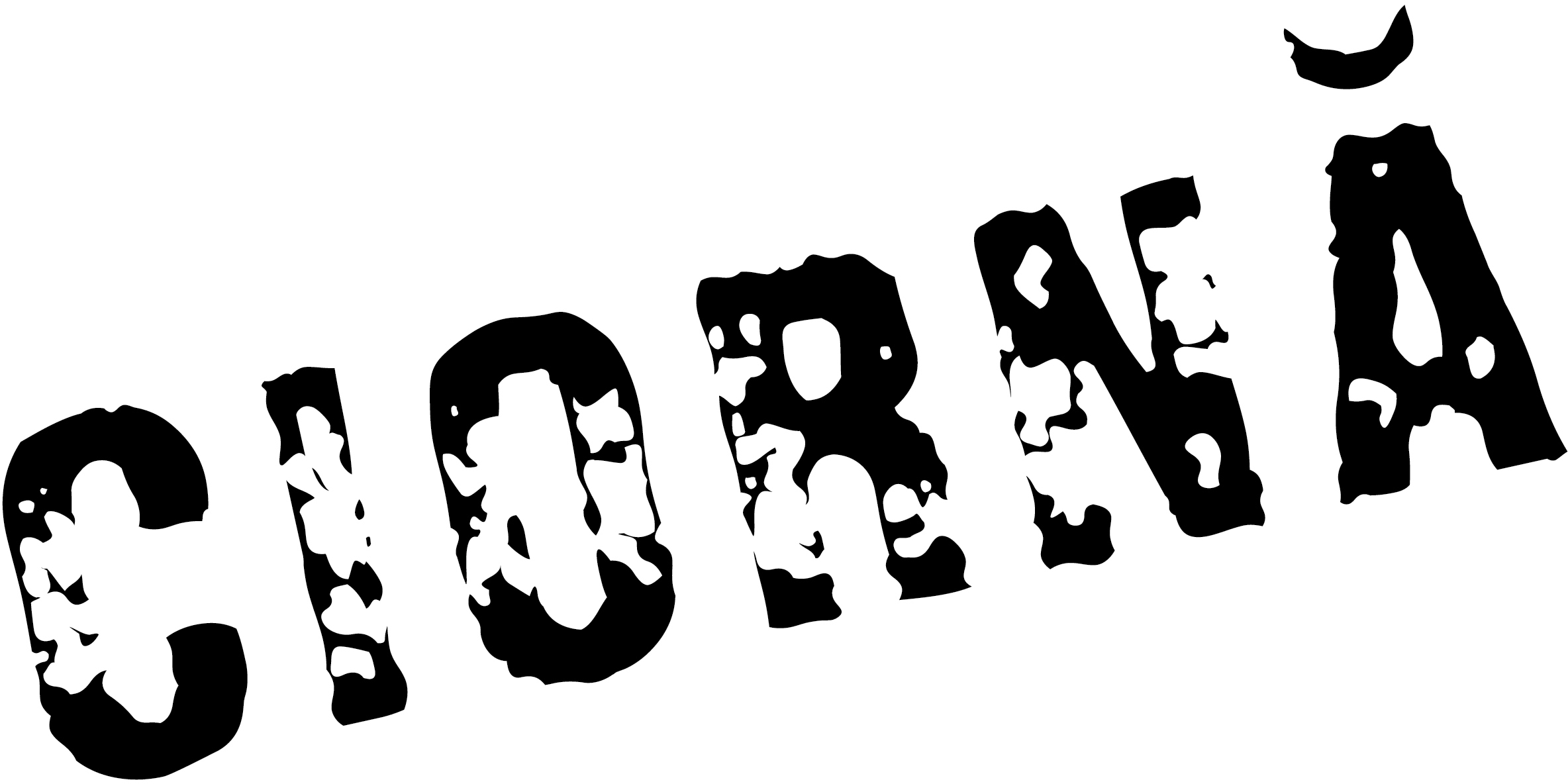 It was October. A gray Friday.

If I had known? I would have run. Tried to hide.

But I didn’t know.

Through the dim half-light of the school corridor I spotted my best friend, Luca. He walked toward me, passing the tedious sign shouting from the concrete wall.

At the time, my mind churned on something far from communism. Something more immediate.

School dismissed at 7:00 p.m. If I left at the right moment, I’d fall into step with her—the quiet girl with the hair hiding her eyes. It would feel coincidental, not forced.

Luca’s tall, thin frame edged in beside me. “It’s official. My stomach’s eating itself.”

“Here.” I handed him my small pouch of sunflower seeds.

“Thanks. Did you hear? The librarian says you’re a bad influence.”

I laughed. Maybe it was true. Teachers referred to Luca as “sweet”
but said I was sarcastic. If I was the type to throw a punch, Luca was the type to break up a fight. He had an eagerness about him, while I preferred to evaluate and watch from afar.

We paused so Luca could talk to a group of loud girls. I waited, impatient.

“
Hei
, Cristian,” smiled one of the girls. “Nice hair, do you cut it with a kitchen knife?”

“Yeah,” I said softly. “Blindfolded.” I gave Luca a nod and continued down the hall alone.

The voice belonged to the school director. He lingered in the hallway, speaking with a colleague. Comrade Director shifted his weight, trying to appear casual.

Nothing was ever casual.

In class, we sat erect. Comrade Instructor lectured, bellowing at our group of forty students. We listened, stock still and squinting beneath the sickly light. We were marked “present” in attendance but were often absent from ourselves.

Luca and me, we wore navy suits and ties to
liceu
. All boys did. Girls, navy pinafores and white hair bands. Embroidered badges sewn onto our uniforms identified which school we attended. But in the fall and winter, our school uniforms weren’t visible. They were covered by coats, knitted mufflers, and gloves to combat the bitter cold of the unheated cement building.

Cold and dark. Knuckles aching. It’s hard to take notes when you can’t feel your fingers. It’s difficult to concentrate when the electricity snaps off.

The director cleared his throat. “Pupil Florescu,” he repeated. “Proceed to the office. Your father has left a message for you.”

My father? My father never came to school. I rarely saw him. He worked twelve-hour shifts, six days a week at a furniture factory.

A slithering knot coiled inside my stomach. “Yes, Comrade Director.”

I proceeded to the office as I was told.

Could outsiders understand? In Romania, we did as we were told.

We were told a lot of things.

I pretended to follow rules. I kept things to myself, like my interest in poetry and philosophy. I pretended other things too. I pretended to lose my comb, but really just preferred my hair spiky. I pretended not to notice when girls were looking at me. And this one—I pretended that studying English was a commitment to my country.

“Words are weapons. I’ll be able to fight our American and British enemies with words, not only guns.”

That’s what I said.

Our weapons course was called Preparing Youth for Defending the Country. We began training with guns at age fourteen in school. Is that old or young compared to other countries? I remember jotting that question in my secret notebook.

In reality, my desire to speak English had nothing to do with fighting our enemies. How many enemies did we have, anyway? I honestly didn’t know. The truth was, English class was full of smart, quiet girls. Girls I pretended not to notice. And if I spoke English, I could better understand song lyrics that I heard illegally on Voice of America broadcasts.

Illegal, yes. Many things were illegal in Romania—including my thoughts and my notebook. But I was convinced I could keep everything hidden. After all, blankets of gloom are thick and heavy. Good for covering things, right?

I proceeded down the dark hallway to the office.

I was an idiot.

I just didn’t know it yet.