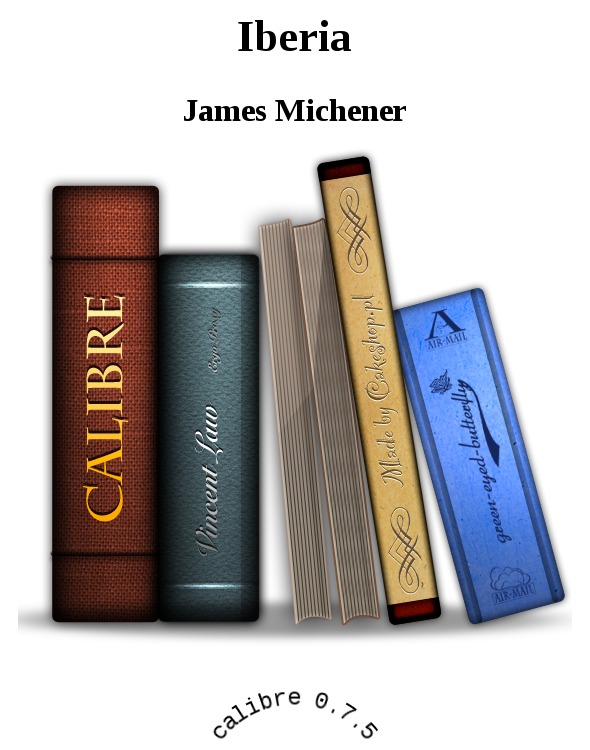 All rights reserved. No part of this book may be used or
reproduced in any manner whatsoever without written permission
except in the case of brief quotations embodied in critical articles
and reviews.

About this Title
Iberia
v

James Michener published fifty books over a fifty-year career as
one of America’s best-loved novelists and essayists. His works,
both fiction and non-fiction, were known for their prodigious
research and educated as they entertained.

From his first work, Tales of the South Pacific, which was adapted
to Broadway and film as South Pacific, James Michener became
a fixture on the American writing scene. His books often were
the number one selling titles for the industry in their initial year
of release. A humble man, James Michener was also philanthropic.

Iberia, in the fresh, vivid prose that is James Michener’s
trademark, is the real Spain as James Michener experiences it. He
reveals the celebrated Spain of bullfights and warrior kings,
painters and processions, cathedrals and olive orchards. James
Michener also shares the intimate, often hidden Spain he has
come to know, where the congeniality of living souls and the dark
weight of history conspire to create a wild, contradictory,
passionately beautiful land, the mystery called Iberia.

While written with the style of a novel, Iberia is the best of travel
non-fiction - you, the reader, are truly there.

RosettaBooks is the leading publisher dedicated exclusively to
electronic editions of great works of fiction and non-fiction that
reflect our world. RosettaBooks is a committed e-publisher,
maximizing the resources of the Web in opening a fresh
dimension in the reading experience. In this electronic reading
environment, each RosettaBook will enhance the experience
through The RosettaBooks Connection. This gateway instantly
delivers to the reader the opportunity to learn more about the
title, the author, the content and the context of each work, using
the full resources of the Web.

To experience The RosettaBooks Connection for Iberia:
www.RosettaBooks.com/Iberia
Iberia
vii

The balanced view which this book endeavors to maintain
regarding the Muslim occupation of Spain was checked against
the anti-Muslim point of view expressed in Louis Bertrand and
Charles Petrie,

In my general attitude toward Fernando, Isabel, Carlos V, and
Felipe II, I was much influenced by R. Trevor Davies,

All statements made about the Inquisition were weighed against
Henry Kamen,

Data relating to the siege of the Alcázar in Toledo during the
Spanish Civil War were checked against Cecil D. Eby,

All material relating to the Carlist pretenders was checked
against Theo Aronson,

An Explanation of Spain
(New York, A. A. Knopf, 1965),
a powerful assault on many aspects of contemporary Spain.

The passage illustrating the interlocking relationships between
Spain and England is quoted from H. V. Morton,

A Stranger in
Spain
(New York, Dodd, Mead & Co., 1955) and that regarding
Carlos the Bewitched from John Langdon-Davies,
Carlos, The
King Who Would Not Die
(New York, Prentice-Hall, 1963).
Iberia
viii

For the enumeration of the attendants waiting upon Juana la
Loca at Tordesillas I am indebted to Amarie Dennis,

Seek the
Darkness
(Madrid, privately published, 1961). Mrs. Dennis also
consented to talk with me about various aspects of the
Isabel-Juana story, for which I am grateful.

To Mary Elizabeth Brooks I am indebted not only for her
excellent study of King Sebastião of Portugal,

A King for Portugal
(Madison, University of Wisconsin, 1964) but also for the
instructive dialogue we held in Madrid in which she explained
sidelights of this bizarre episode. Where my account differs from
hers I have so indicated in the text.

After my manuscript was completed, I had the privilege of
meeting in person that queen of American bullfight aficionados,
Alice Hall of Georgia. Her preferences were so violent and so
persuasive that I modified certain opinions I had previously
expressed in the taurine material.

In the text I have expressed my appreciation of the help
provided by Don Luis Morenés y Areces, Marqués de Bassecourt,
who helped me on three different occasions: in Las Marismas, in
Madrid, and on the pilgrimage to Santiago de Compostela. I have
never known a better traveling companion nor a man more
imbued with his subject, in this case a love of Spain.

During the two months that I concentrated on the question of
bullfighting I had the pleasure of Matador John Fulton’s company,
and while I must not saddle him with any of the heterodox
opinions I express about his profession I do wish to thank him
for his expert guidance.

For permission to explore the Coto Doñana I am, like
naturalists around the world, indebted to José Antonio Valverde,
who serves as custodian for this rare corner of Europe. Many of
the incidents I report as to the passing of the year in the Coto I
owe to Dr. Valverde.

To Patter Winslow Ashcraft I am indebted for some of the
finest picnics I have ever had. To wander across Spain without
halting for varied picnics would be to miss the best the country
has to offer and from this fate I was saved by Mrs. Ashcraft.

To my two old diplomatic friends from Afghanistan days,
Steven Baldanza and Osbert Day, I am indebted for their help in
guiding me around their new duty posts, Baldanza in Lisboa, Day
in Madrid.

I cannot adequately express my dependence upon and
appreciation of Professor Kenneth Vanderford, Ripon College,
Ripon, Wisconsin. At my request he read the manuscript and
checked it against his encyclopedic knowledge. Barely a page
escaped his savage eye. On esoteric points he was a prince of
debaters. He also assumed responsibility for all translations from
Spanish into English, except where historical ones had to be
followed.

My deepest gratitude must go to that extraordinary tertulia of
the Café León. That a group of distinguished members of the Real
Academia de Española should have welcomed me, a stranger, and
should have given their time to my questions was a testimony to
the warmth of hospitality which Spain extends to the visitor. I
am especially indebted to José María de Cossío, whose robust
humor and wide spread of interests impressed me, and to that
delightful and irreverent scholar from the University of Texas,
Ramón Martínez López.

To the scores of other advisors, like Juan Quintana and Virginia
Smith on bullfighting, William Frauenfelder on Cataluña, Ignacio
Herguete G. de Guadiana on Trujillo, Luis Ybarra González on
Las Marismas, Luis Morondo on the music of Victoria, Father
Jesús Precedo Lafuente on Santiago de Compostela, Alcalde José
Filgueira on Pontevedra, Fernando Zóbel on contemporary
Spanish painting, José María Lassaletta on wildlife, Tess LaTouche
on daily gossip, Brewster Cross on flamenco, Dr. José María
Muguruza on the Prado, David Peace on tourism, and Madelyn
Mack on one woman’s view of the romance of Spain, I owe a debt
which can never be repaid.