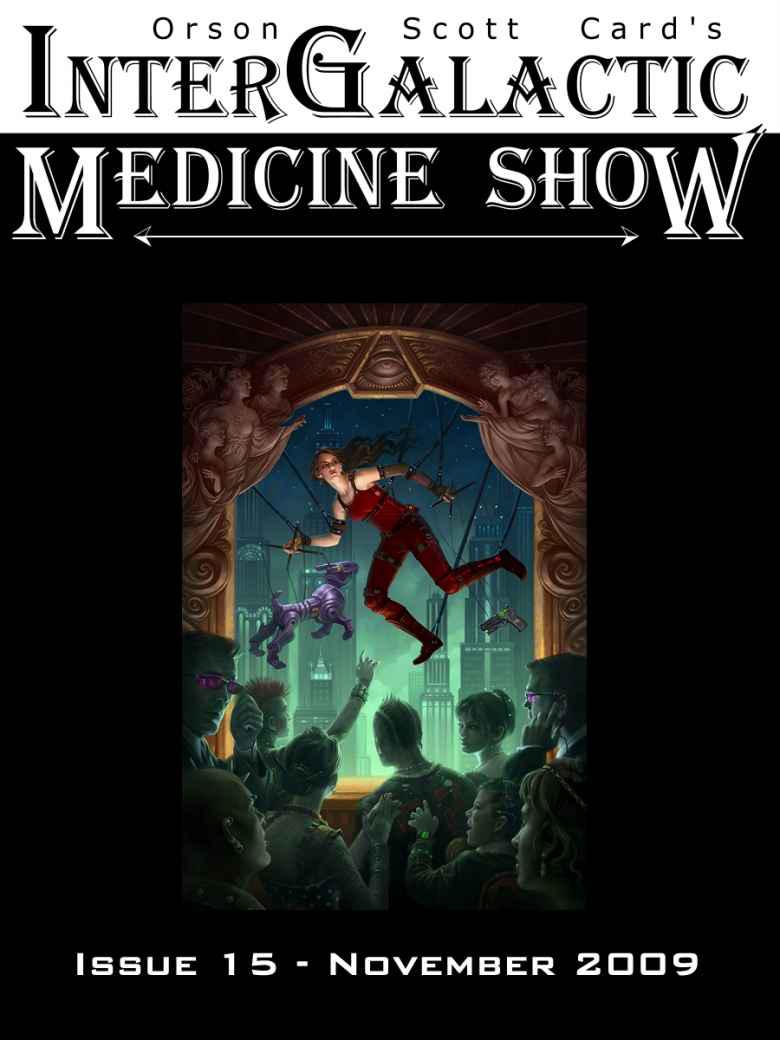 The Report of a Doubtful Creature

Aim for the Stars

Get out of Gym for Free 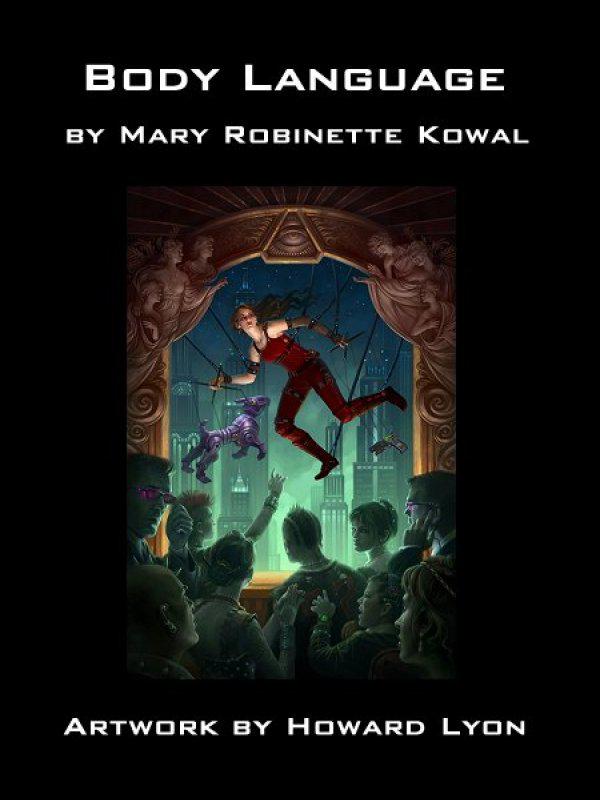 Saskia leaned into the darkness above the stage, only vaguely aware of the wood rail against her hips as she retied the left headstring on her marionette. On the stage below, the Snow Queen's head eased into balance. The marionette telegraphed its stance back up the strings to the control in Saskia's hands. She ran the Snow Queen across the set to check the repair, barely conscious of her own body on the bridge above the stage. It was almost like being immersed in a VR suit.

One of the techies called up. "Hey, Saskia? There's a detective here for you."

She stopped abruptly and the marionette continued its motion in a long pendulum swing. Detective? At the foot of the ladder, the techie stood next to a stocky man, maybe Indian, maybe South American. She'd never been good at guessing.

Saskia shivered; A.I. always made her edgy. They were like puppets in reverse -- a soul without a body. She took her time hanging up her puppet before she descended the ladder.

"Ms. Dorlan? I'm Agent Jared Patel with the FBI." Patel's eyes flashed over Saskia's shoulder. She glanced back before realizing that he was looking at the A.I. in his interface glasses. It gave her the creeps. "I need to talk to you about eDawg."

"My fans are usually a little younger . . ." She tried to use humor to lighten the tension, but Patel's lips barely curved in response. Saskia had done the motion-capture for eDawg in the series eCity, but she could not, for the life of her, figure out why the FBI would be investigating the puppet. They hadn't filmed a new episode in over a year.

Unless, holy crap, unless this was about one of the toys the series had spun off. Maybe one of their tiny terrier brains had gone rogue and killed some rich kid. It had to be a rich kid; they never investigated the deaths of poor ones.

"I realize this will seem like a strange request. Your producers agreed to loan us the eDawg puppet, but only if you oversee its care. They said the controls are customized to you and they didn't want to risk it with someone else."

"I'm stunned that they would let the puppet out of the studio at all. You must have a heck of an insurance waiver."

"We're the government." He let that sit between them for a moment, then smiled. It was not comforting. "We'll compensate you for your time, of course."

The word compensate changed everything. He wasn't investigating eDawg; he was offering her a gig. "So you want me to work the puppet?" She itched to get back into the suit again. She loved traditional puppetry, but nothing compared to motion-capture work.

"Our A.I. will handle that, don't worry; you're just there as a formality."

"Look." She caught herself before she could start a rant about A.I. driving puppeteers out of film and video work. "Even if I were willing, it's not going to look right."

"When you recognize someone from a distance, it's not just their height and weight, it's how they move. Give the same puppet to different puppeteers and it'll look like different characters. That's why they had me do the motion-capture work when they made the toy versions of eDawg." She stopped suddenly, wondering why they needed the puppet at all. "Can't you use one of the toys? They look just like eDawg and there are like, thousands of them"

"We need to have more control of eDawg than a toy would provide."

"You can have control, but you won't have eDawg. Not unless it moves like me."

Patel shifted his gaze to the spot over her shoulder. His jaw worked in silent conversation with his A.I. partner. Crazy machines had no idea how people thought or moved, yet they thought it could do the job.

Patel looked back at her. "Our agent feels confident that she'll be able to match your movements."

"Is this something you can force me to do?"

"Then I can't see any reason to help someone else do
my
job." She grabbed the ladder to climb back up.

"Personally? No. Seen him in the news, yeah."

"His son, Wade, has been kidnapped. The kid's toy eDawg was the only witness. We've got the thing torn apart trying to access its memory without wiping it, but the kidnappers just told us that they want the ransom delivered via eDawg. You say 'no' to this, we don't get to use the puppet. You say 'no' and that kid's life is thrown up in the air."

Crap. A kid. Saskia stopped where she was on the ladder and rested her head against the rung. "Okay. Let me tell the stage manager where I'm going."

At the FBI field office, the motion-capture rig dominated the space like a bizarre piece of gym equipment.

In the early days of motion-capture, the performer roamed the studio trailing wires, but the new technology used a universal treadmill floor to allow performers to simulate covering ground while remaining in a single location. In the center of the rig, almost obscured by cables and rods, was the carapace Saskia wore when she performed. It looked like a wire-frame rendering of eDawg. In addition to controls for eDawg's ears and tail, the carapace had sensors built into it so that when Saskia moved, the system translated her movements via a wireless interface to the puppet's limbs. Patel's A.I. partner would hack into the signal and bypass the rig.

A holo of a woman's head and shoulders materialized over a desktop interface. She smiled with almost Victorian purity. "I'm Metta. Sorry I couldn't introduce myself earlier."

"That's fine." Saskia had been in no hurry to meet the A.I. then, and would be more than happy to skip it now.

For the next fifteen minutes, she watched the smooth purple titanium dog spin through a series of movements, all of which looked indistinguishable from her performance. Even the bark sounded like her. It was uncanny, like the first time she had seen one of the toys activated. Except then she had been watching a three-dimensional recording of her performance. This was different; the A.I. could replace her. Heck, the A.I. could
be
her.

When Metta finished, she turned to Saskia and said, "Am I convincing as eDawg?"

She was convincing as a bitch, yes. But Saskia nodded. "That all looks really good."

"Thank you." The A.I. looked unsurprised at Saskia's praise. "Would you watch us role-play the scenario for dropping the ransom money?"

Patel held the door open. "We'll have eDawg start as if it were on the street outside the drop location."

eDawg sniffed the air as it leaned forward, with its ears held upright and tail wagging. The movements looked familiar. They also looked wrong. Saskia said, "That's from the episode with the eTreats, isn't it?"

"eDawg was searching for treats then. She shouldn't be excited here. Think 'scared.'"

The sniffing changed instantly. eDawg crouched and shivered. She lifted her nose and sniffed twice. Saskia's jaw dropped. It looked
exactly
like eDawg emerging from her doghouse in the thunderstorm episode. "Are you doing this by rote?"

Beyond Summer by Lisa Wingate
Sons of Mayhem 2: Blood and Whisky by Nikki Pink
Spice & Wolf I by Hasekura Isuna
Jigsaw (Black Raven Book 2) by Stella Barcelona
Round the Bend by Nevil Shute
Sabrina's Clan by Tracy Cooper-Posey
Birth of a Dark Nation by Rashid Darden
Apple Blossom Time by Kathryn Haig
Watkin Tench's 1788 by Flannery, Tim; Tench, Watkin;
Inside Out by Barry Eisler
Our partner