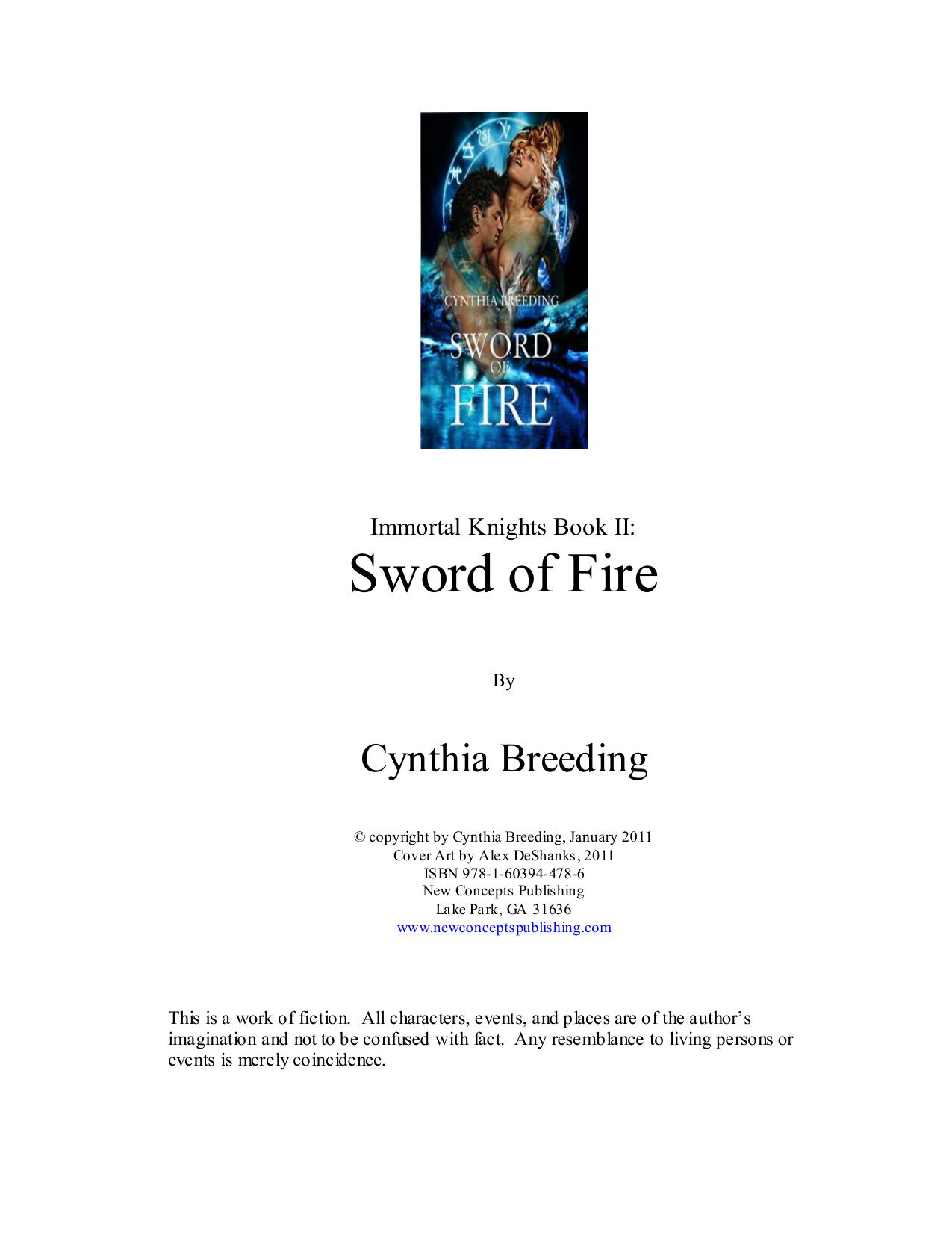 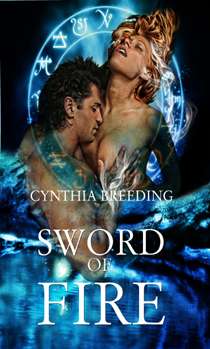 This is a work of fiction. All characters, events, and places are of the author‟s

imagination and not to be confused with fact. Any resemblance to living persons or

Brighid, goddess of Avalon, approached the dragon‟s lair with trepidation. For

centuries, she had let him sleep. Would awakening him now put the mortal world in even

more danger that it was already in? She sighed.

Beside her, her consort spoke. “My love. It must be done. The Sword of Fire

was forged by the dragon. It is his domain.”

“I know, Bres,” she said softly, “but, like fire, the dragon is unpredictable, his

“I doubt that we‟ll be incinerated,” Bres said wryly.

Brighid rolled her eyes. “Not us. Remember what happened when Nero

“Well, Nero executed his own mother,” Bres replied. “Rome‟s fire was merely an

“And what about Pompeii?” Brighid countered. “That was a bit much, even for

“That could have been an accident on the dragon‟s part,” Bres answered.

“We could be releasing even more danger into the world,” Brighid said

doubtfully. “Mortals are a superstitious lot and that fiend, Balor, has incited too many nations to violence. How will humans react to see a firedrake fly across the sky? If they attempt to kill him, he may not retreat in his anger.”

“He has a tough hide,” Bres replied, “but remember, he has a sense of justice as

well. He held the Romans in check in Britain. Even Balor could not help Caesar past the Wall.”

Brighid slanted a glance at him. “The Romans thought they were holding the

Picts back, if I recall, by building the Wall.”

Bres chuckled. “Rome always did have a high opinion of itself. But back to the

point. Summon the dragon, my dear. We will need him if we are to keep the Sword of

Fire out of Balor‟s hands.”

She nodded slowly and turned, raising her hands high, as she uttered an ancient

incantation. Around them, the mists swirled and parted, revealing jagged cliffs ahead.

Small rocks began to fall, followed by larger boulders as the stony wall began to shake.

Fire flashed from a crevice, followed by an immense bellow that rolled like thunder down the hillside.

“I knew he was not going to be happy,” Brighid said.

Before she finished speaking, the crevice cracked wider and a huge dragon

lumbered out, smoke spewing from his nostrils, sharp claws scraping against the granite of his den. Gold-tipped, ruby scales reflected the sun as he blinked large, cobalt eyes at them.

“Why have you disturbed my rest?” he asked in a deep, gravelly voice that had

not been used in years.

The dragon snarled, flames shooting from his mouth. “I have no love for weak

humans. Do not bother me with their insignificant problems.” He shook his head,

causing the rock to tremble and began to retreat.

“Wait!” Brighid called. “It is the Sword of Fire that is in danger!”

The dragon halted and swung his massive head around. “Excalibur? I thought

that was safely back into the Lady‟s hands.”

Brighid shook her head. “You have been slumbering for fifteen hundred years.

The dragon snorted more fire. “It did not work, did it?”

Again, Brighid shook her head. “Unfortunately, over time, the leaders who were

to be entrusted with using the power, became corrupt themselves, no doubt thanks to

Balor‟s influence. The knights no longer knew whom to trust, so the relics were

separated and hidden in a foreign land. Safe until recently.”

The dragon sighed, great puffs of smoke spewing forth. “Where is your brother,

Lugh? Did the Lady not prophesize that he would hunt Balor down and destroy him?”

“He has collected his Spear,” Brighid replied, “but in returning it to the Isle, he

got snared into Merlin‟s protective wards. The portal to Earth will not return him until next Beltane, nearly a year hence. We cannot afford to wait until then. If Balor gets his hands on even one of the holy relics—“

anger. “I cannot kill Balor, much as I would like to. The prophecy forbids it.”

“I know. Nimue has been sent to find one of the immortal knights, Michael the

Avenger, a warlock who has the ability to obtain the sword.”

“A sorcerer? Why would he need the help of a dragon?”

“It is not he who will need your help exactly,” Brighid said and glanced at Bres

before looking back at the dragon. “As in all things, his life-energy must be balanced

with a female‟s for the answer to the sword‟s location. It is the woman who will need

Flame shot from the dragon. “Why would I protect a human female?”

“She‟s not entirely human, although she does not know it,” Brighid answered and

sketched a rune in the air, creating something that looked like a crystal ball. “And

besides, you know her. Look.”

The dragon extended his long neck and peered into the glassy sphere. He

rumbled low in his throat, his eyes looking suspiciously bright.

“Come on, baby. You know you always liked it when I spread your legs and

licked your juices. I could make you come in ten seconds.” The male voice on the other end of the phone sounded smug. “Or maybe less.”

her ex-husband. She would not give him the satisfaction of riling her. Lord, the divorce had been final for over a year.

“Remember how I used to pinch your nipples the way you liked? Just hard

“That‟s enough, Robert. I don‟t care to have phone sex with you.”

“I could come over. It would be more fun that way.”

He actually sounded hurt and confused. Sophie made a sound of disgust. Robert

was a good actor, a trait he used in the courtroom to his advantage. He‟d totally had her believing he was faithful—looking her straight in the eyes and telling her he loved her—

only his version of love included dalliances with whomever else caught his fancy.

“Did you and Amber have another spat?” she asked. That‟s when he usually

There was silence on the other end. Then he said, “We broke it off.”

“Seems to me that happens about once a month.”

“Ah, baby. Don‟t be so hard on me. This time‟s for real. I came home last night

and another guy was in our bed. You were right, baby, about everything. Amber was

just using me. Liked the fact that I‟m a big-shot attorney.” He sighed audibly and his tone softened. “I could have you hot for me in five minutes. Sex was always great for

“I suspect sex is great for you no matter who is in your bed,” Sophie replied.

“Ah, baby, you‟re just angry with me. I can‟t blame you. Just let me come over

there and I‟ll prove I can make you feel…”

Sophie clicked the “off‟ button silently in the middle of his spiel. What he had

done to her was far worse than physically being unfaithful. She had lost her ability to trust any man. They all thought with their smaller head than the one that was attached to their shoulders. Who needed them anyway?

Besides which, she had her work. Sophie picked up her truck keys and headed

out the door for the animal clinic. At least there, she had unconditional love. Four-

Nimue wasn‟t exactly the most reliable faerie in the realm.

hotel room again, his warlock senses on high alert. Little tendrils of magic still laced the air: thin silvery threads that were his friend, Sara‟s, and stronger golden ones that were no doubt Lucas Ramsey‟s. Michael sniffed the air. A slight trace of sulfur also lingered.

No doubt, Adam Baylor had been here too, but Michael felt no life essence.

The immortal bastard had escaped.

If Nimue were to be believed, Lucas and Sara had successfully recovered the

Spear of Light, one of four sacred relics that the Lady had given the human world

centuries ago to protect it from infinite evil, and they were in hiding somewhere. Nimue had hardly made sense last night when she arrived, chattering about that damn fool,

Merlin, who couldn‟t unbind his own spells. She had thrust a piece of paper into

Michael‟s hands, told him he had to go to Lewiston, Maine, immediately and then she

had vanished before he could question her further.

He who sees the firedrake

The sword will take

Come, come to the lake

Michael refolded the paper and sighed. Now he wished he had listened a little

more carefully to what Sara had said about the manuscript her boss, the anonymous and

filthy-rich John. Smith, had sent her to Sotheby‟s to purchase. It had been found in an archeological dig in Scotland, written in medieval Gaelic, and originally believed to hold the secret to finding the Holy Grail. Sara‟s very eccentric boss was obsessed with

But what came to light, after it was translated by a scholarly friend of Sara‟s who

had been murdered for the copy, was even more startling.

identities after the French persecution. References were made to treasures hidden at

Rosslyn Chapel and then, later, of the need to separate and hide the sacred relics far away from the corruption that the Inquisition brought to Scotland. Another odd poem had been encrypted within the lines.

Apparently what Nimue had given him was the second verse. Just before she

vanished, she had winked flirtatiously and told him he—and some mystery woman—had

been chosen to find the sword.

Faeries. Fickle lot, all of them.

Cathedral of Saints Peter and Paul. He stood for a moment across the street from the

church, admiring the beautiful rose window that was a replica of the medieval one in

Chartres, France. He remembered when the original French cathedral had been built—

he‟d had to leave England quite suddenly to escape false accusations—well, sort of

false—made by a jealous husband. The wife had tried to sed uce
him
, not the other way SWORD OF FIRE Cynthia Breeding 6

Summer Storm by Joan Wolf
Greenwitch by Susan Cooper
The Antique Love by Fairfax, Helena
Quit Your Witchin' by Dakota Cassidy
SOULLESS (Black Thorns, #2) by Franca Storm
The Spanish Civil War by Hugh Thomas
Hard Irish by Jennifer Saints
Because You Are Mine Part I by Beth Kery
The Pot Thief Who Studied Ptolemy [02] by J Michael Orenduff
Lake of Fire by Linda Jacobs
Our partner