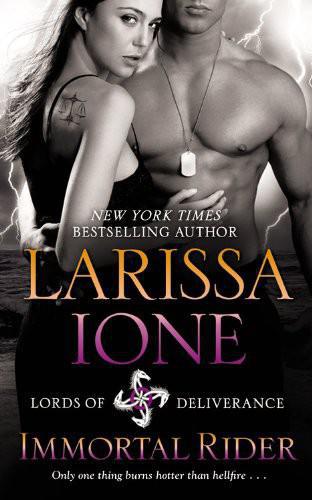 A Preview of
Lethal Rider

For everyone in the romance community—readers, writers, and publishing professionals—who recently came together to help one of their own, and who continue to put together events that benefit individuals, communities, and even entire countries. You’re an amazing group of people, and this Horseman is for you!

Huge thanks, as always, to the entire Grand Central Publishing team who worked so hard to get this book onto the shelves, with special thanks to Amy Pierpont and Lauren Plude for all their work and help.

Also, thanks to Cid Tyer for letting me have Rhys to torture a bit. I had a lot of fun!

And finally, a big thank you to Shawna Malone… now we just have to move you to Wisconsin!

Arik Wagner had to hand it to the Four Horsemen of the Apocalypse; they threw one hell of a party.

Well, three of them did, anyway. The fourth, whose name had been Reseph before his Seal broke and he became known as Pestilence, had been lying low since his defeat at the hands of his siblings, Ares, Limos, and Thanatos, a month earlier. The asshole and his demon army was no doubt regrouping, but for now, everyone was breathing a sigh of relief.

Hence, the celebration, which was part celebration for the victory, and part engagement party for Ares and his fiancée, Cara. Everyone who’d survived the battle had been invited to Ares’s Greek mansion. Ares had also extended an invitation to the Underworld General staff who had helped Cara when she’d been dying, so the place was crawling with demons.

There were even a couple of angels roaming around.
Reaver, who Arik had already decided was one big tool, was over by the chocolate fountain talking to a sparkly female angel named Gethel, who used to be the Horsemen’s good Watcher before Reaver took the job. The Horsemen also had an evil Watcher named Harvester, but she hadn’t been invited. Something about her being a world-class bitch who might eat the guests.

Thanatos, the fourth Horseman, bumped into Arik as he dove for a football someone had tossed from across the huge great room.

“What’s the matter, human?” Thanatos punched him in the shoulder with the ball hard enough to make Arik stumble backward. “Ping-Pong more your speed?”

Arik shot Kynan Morgan, an old Army buddy who was now one of the bigwigs in charge of The Aegis, an ancient demon-slaying organization, a
you-ready-to-go-or-what
look, and Ky, who was deep in conversation with Ares, held up his finger. He and Arik had intended to stay no more than ten minutes, since Ky wanted to get home to his wife, Gem, and their new baby. That was more than fine with Arik.

If Arik spent another minute inside with these supernatural, superior asshats, he was going to slit his own throat. Also, if Limos, the drop-dead-gorgeous female Horseman, caught him leering at her one more time, she’d likely slit his throat for him.

She might appear to be the definition of a sorority party girl, but under the skirts, nail polish, and flowers in her hair, she was every bit as dangerous as her brothers.

No one seemed to be paying any attention to him, so he strolled out of the house and into the cool November
night air. He’d always liked Greece, had visited a couple of times on military assignments. The food was good, the weather perfect, and the people weren’t assholes to Americans. Sure, the Greeks had a high concentration of demons living among them, but some of the oldest countries did. Demons, being extremely long-lived, if not immortal, had a tendency to stay in the places they knew well.

They really weren’t all that adventurous. Pussies.

He parked himself on a stone bench overlooking the sea. He could feel the piggy eyes of Ares’s Ramreel demon guards on him, but he ignored them and looked up into the heavens. The stars were bright tonight, their lights glittering in the pitch-black sky. He’d spoken to Cara for a few minutes out here when she’d had to usher a hellhound party crasher out of the house, and he’d been impressed with how easily she, as a human, had integrated into the supernatural world. Oh, she’d had trouble at first, describing some truly fucked-up events—Ares had screwed with her memories? Arik would kill someone for that—but she was happy now, all hellhound queen and engaged to a damned legend.

And speaking of legends, he smelled Limos before he heard her; the aroma of coconut drifted toward him on a breeze and made his blood pump a little faster. Coconuts had never turned him on before, but then, the scent had never been attached to a red-hot female with hair the color of the midnight sky, either.

“What are you doing?” Her velvety, feminine voice was so at odds with the warrior he knew she was, and he wondered how she sounded in bed. Did she hold on to her female side, or did she play rough, dominant, letting the fighter in her take over?

Because you were making me crazy.
“Just did.”

She came around in front of him. Her knees touched his, and her floral Hawaiian dress, an intense violet that matched her eyes, swirled around her shapely ankles, flapping at his boots. “I sense agitation in you. Want to let some out? A little hand-to-hand?”

Jesus. Okay, yeah, she might sense some tension in him, but it wasn’t because he wanted to draw blood. He wanted to get naked, and the weird thing was, he imagined getting that way with her. She fascinated him with her contradictions, riled him up with her body, and earlier in the night, when he’d seen her helping Ares’s servants clean a spill in the kitchen, he’d admired her. She’d gotten down on her hands and knees and scrubbed the floor, and she’d done it with a damned smile.

Of course, he’d smiled too, because the sight of her on her hands and knees? Instant hard-on.

Now, as Limos stood in front of him, things were hardening again at the idea that all he’d have to do would be to fist that dress, hike it up over her hips, and he’d be at eye level with her most private place. Would she let him go down on her? What would she taste like? Did that coconut scent permeate everything? Because he fucking loved coconut.

Somehow, he scrounged up enough self-control to put his hands on her waist and set her aside so he could stand. “I don’t want to let anything out.”
Except my dick
. She’d probably kill him if she knew what he was thinking.

He started for the house, because he was going to
drag Kynan out of there if he had to, but naturally, Limos would have none of that. These Horsemen seemed to have a huge sense of entitlement.

“Stop!” She grabbed his elbow and swung him around. “I’ll let you throw the first punch,” she cajoled, with a waggle of raven brows.

He leaned down and stared her in the eyes. “I don’t hit girls.”

It was the wrong thing to say. Half a second later, he found himself flat on his back, with her flip-flopped foot on his neck.

“See,” she said brightly, “that is why I was offering to give you the first throw. At least this time I didn’t break your ribs.”

“Wow,” he rasped. “Do you emasculate all the men, or am I special?”

Her sensual lips curved into an amused smile. “Oh, you’re special, but I wouldn’t take that as a compliment.”

“I can see up your dress.” It wasn’t true, but he got a kick out of the way her eyes went wide and she started to sputter. He brought his hands up to grasp her ankle, his intention to lift it to give him some room to breathe, but her skin was so soft he ended up just lingering like that.

“What are you doing?” she gasped.

“Nothing.” He smoothed his thumb up and down the side of her leg, in the sensitive place where the ankle met the calf. Her muscles were firm, her skin silky, and man, he wanted to slide his hands up higher. But he had her where he wanted her—off guard. Now to take it one step further…

With a yank, he tugged her leg out from under her, and at the same time, he twisted so she came down on top of him, breaking her fall. She looked so startled, so utterly disbelieving that he’d bested her, that she lay motionless on his chest, mouth open, staring at him.

God, she was gorgeous. And that mouth… made to make a man beg for mercy. So he kissed her. Didn’t even realize he’d done it until his lips were on hers. He hadn’t thought she could be any more shocked, but her eyebrows shot up so far it would have been comical if he hadn’t been rocking his head up to put them into a more serious kiss. That was the thing about him—no half-measures. He might not have realized he was kissing her, but once he did? He was taking it as far as she’d let him go.

For a brief, sweet moment, she kissed him back. Her lips softened and her tongue met his, hesitantly, as though she wasn’t sure what she was doing.

And then his world turned upside down.

Limos reared back, and with what he was pretty sure was all her strength, she slammed her fist into his cheek. Pain spiderwebbed across his face, along every bone, through every tooth. He’d been tasting her, and now he was tasting his own blood.

“What the hell?” he shouted… or at least, he tried to shout. His words were mushy, thanks to his mashed lips, cut tongue and, likely, badly fractured jaw and cheekbone. He heard something more like, “
Nut da bell
.”

“You kissed me!” Eyes wild, she backed away so fast she lost her flip-flops. “Do you know what you’ve done, you idiot? You’re going to pay for kissing me.”