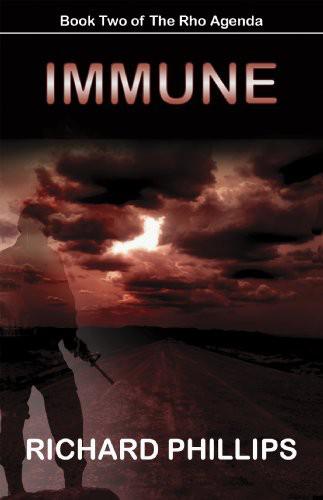 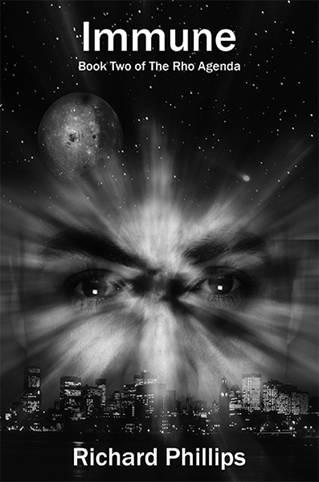 Book Two of The Rho Agenda

I would like to thank my lovely wife, Carol, for her support, encouragement, and feedback throughout the telling of this tale. Many thanks to Alan Werner for the long hours he spent going over the story line and providing me his fresh perspective. Finally I want to thank the wonderful staff at Synergy Books, for all their fine work in shaping the final product into a smoother and more enjoyable read.

The naked teenage boy lay flat, suspended in the air as if he rested upon an invisible examination table.

If he could have blinked his eyes, he would have. But that was not possible. The stasis field that held him suspended four feet above the floor permitted no such movement. Instead, his eyes stared upward, unable to close, unable to blink, his movements now subject to a will other than his own.

Gray light from the conduits that snaked overhead illuminated the jumble of machinery crowding the room. The teen’s ears thrummed with the low, throbbing pulse of the machinery that surrounded him. He wasn’t sure how long he had lain there. Except for the thrumming, his only full-time companion was pain. He dared not think about his other visitor.

A subtle current in the air wafted around his body, a passing coolness that gently brushed the hairs on his arms and alerted him to the visitor’s arrival before the other man passed into his peripheral vision. The arrival confirmed only one thing: God had abandoned him. A lifetime of belief had been stripped away; the awful truth lay bare. No loving God would allow his child to endure this. Not this.

The face of Dr. Donald Stephenson, deputy director of Los Alamos National Laboratory, swam into the boy’s view. The scientist's eyes swept him as clinically as a medical examiner studying a corpse. An apparatus the size of a small screwdriver dangled from Stephenson’s fingertips. From one end, a bundle of hair-thin wires extended for an inch and a half; the other end terminated in an odd-shaped lens that swiveled about on a pivot. Leaning in close, Dr. Stephenson held the device to the teen’s face, reaching out with his left hand to touch the skin that covered the orbital socket of the boy’s right eye. Satisfied, the deputy director set the device to one side and pulled on a pair of latex gloves.

"Good morning, Raul. Shall we begin?"

Clamped within the grasp of the invisible lines of force that draped his body, Raul's mouth could not even twitch to release a scream as the scalpel removed his right eyelid, then scooped deeply into the socket. A single spurt of blood splattered Raul's face before his nanite-infested bloodstream could stem the flow. Moving faster than Raul's healing process, Dr. Stephenson thrust the end of the lens device into the empty socket, sending the hair-like wires squirming into Raul's head, burrowing deep into the exposed optic nerve.

Having abandoned his prayers for death, Raul hurled his mental curses at the God who had abandoned his son to an altogether more horrifying crucifixion.

School had been out less than a week. Heather should have started feeling that wonderful sense of relaxation that comes from getting used to the idea that there isn’t any homework due. Instead, a growing sense of foreboding plagued her.

She had been dreaming again. Those strange dreams, which she couldn't quite remember when she awoke at odd hours of the night, left her skin damp with sweat. Neither Mark nor Jennifer had mentioned nightmares, leaving Heather the only one of the three who wasn’t sleeping peacefully and looking rested.

That she couldn’t remember the dreams was strange in itself. After all, she remembered everything. All three of them could play back anything they saw, the images as clear on the theater screens of their minds as if they were seeing it anew. But not these dreams. She actually dreaded going to sleep for fear of what the dreams contained, although that made even less sense. What sleep she had been getting came toward morning, marring her pattern of being an early morning riser.

This morning, a bright sliver of sunlight made its way through the branches of the tree outside her window and into her room. As the branches swayed in the gentle morning breeze, the annoying sunbeam repeatedly stabbed at her eyes, like the glint from a cavalry trooper's signaling mirror in an old western movie.

In addition to not feeling rested, this morning her head hurt. Griping at sunbeams wouldn’t help, but somehow it made her feel just a little bit better to vent her annoyance to the universe.

Heather debated just throwing on her robe and going downstairs for a cup of hot tea. But a hot shower called to her. She breathed in the steam as she stood beneath the pulsing jet from the massage nozzle, the temperature set just cool enough to avoid raising blisters on her skin. She gave thanks for old houses built before flow restrictors reduced the available water pressure to an impotent trickle. It was one of the many things about her house that she loved.

By the time she dressed and made her way downstairs to the kitchen, Heather felt almost human. The television news blared from the living room indicating the location of her parents, but she bypassed it, blocking out the breathless voices of reporters in Breaking Story mode as she homed in on the bin with the tea bags.

"Good morning, Mom, Dad," she called out over her shoulder as she slid the cup into the microwave to heat the water.

The lack of response to her greeting struck her as curious. Perhaps her parents had gone outside without bothering to turn off the TV. She'd switch it off and join them as soon as her tea was ready.

Thinking of the TV focused her attention in that direction, finally allowing the words of the news report to filter into her consciousness.

"…at his home just outside of Ft. Meade, Maryland, this morning. In what police are calling a tragic case of murder-suicide, the FBI discovered the bodies of NSA director Jonathan Riles and Senior NSA computer scientist Dr. David Kurtz at the Riles residence this morning.

"Although the investigation is ongoing, high-level sources inside the administration tell CNN that FBI agents were in the process of executing a search of the Riles home, pursuant to a search warrant, when they discovered the two bodies in Admiral Riles' private office.

"We have also received word that Admiral Riles may have been despondent over an FBI investigation into illegal activities being conducted by the NSA, activities that Riles had authorized without the knowledge or approval of the president.

"…Hold on. We are just getting word that the vice president, a longtime friend and college roommate of Admiral Riles at the Naval Academy, is about to issue a short statement. We go now to the vice president…"

Heather didn't remember leaving the kitchen and making her way into the living room, but she now found herself standing behind the couch where her mom and dad sat riveted to the television screen. Vice President Gordon stared somberly into the television camera from behind his desk at the White House.

"My fellow Americans. It is with the deepest sadness that I address you this morning. I have taken this unusual step because I cannot bear the thought of how my good friend may be portrayed in coming days. With that in mind, I think it is important to let you, the American people, know a little of what I know about the man and the situation that led to this tragic outcome.

"I have known Jonathan Riles since we were roommates together at Annapolis. I played alongside him on the Navy football team. I studied at a desk across the room from him as he qualified for selection as a Rhodes Scholar. And I served with and under him as he rose to the rank of vice admiral in the United States Navy.

"Never have I met a braver man or one who cared more about his country than Jonny Riles. He was a man's man, a man from a different age. He cut his teeth in the historic struggle of the cold war. That struggle against the Soviet Empire molded his belief set and, in the end, I believe that it was that belief set that destroyed him.

"All of you are aware of the tremendous implications of the president's public announcement of the existence of the Rho Ship, along with his plan for a phased release into the public domain of the beneficial technologies your government has been able to unravel to this point.

"You are also, no doubt, aware that there has been a tremendous ongoing debate, both inside and outside the administration, about the wisdom of making that information public. Our president took the courageous and, I believe, correct step in putting the good of our planet ahead of selfish national interest by releasing that information.

"Unfortunately, despite all of his years of exceptional service to our country, my oldest friend could not bring himself to accept that decision. In recent days, it has come to our attention that Admiral Riles was misusing his position at the National Security Agency in an attempt to discredit the ongoing work being done by the fine scientists on the Rho Project. In doing so, he hoped to prevent the release of technologies that Admiral Riles felt were best kept secret and used solely in the interest of the United States.

"Once he became aware that his unauthorized criminal activities had been discovered, Admiral Riles killed Dr. David Kurtz, the man whom he believed to be a government informant, and then turned his gun upon himself."

The vice president paused momentarily, his eyes shining with moisture.

"People often speak of the fog of war. Well there is another type of fog that can obscure the vision of those who have risen to a position of power through a lifetime of service to their country. It is the fog of personal beliefs. Sometimes that fog can become so thick that it obscures the one thing that serves as a constant beacon, leading our ships safely into port. That one thing is the Constitution of the United States of America.

"I close now, hoping that I have given you some sense of the man I knew. A good man, a brave and honorable American, an old Navy hand who lost his way in the fog and allowed himself to lose sight of the beacon that could have guided him safely through.

As the image of the vice president disappeared, replaced with one of the myriad of TV analysts, Heather found tears rolling down her cheeks. She had never even heard of Jonathan Riles but, almost, she felt that she knew the man. The sense of foreboding that had been growing in her mind these last few days now had substance. Apparently, their attempts to stop the Rho Project had failed.

From the kitchen, the periodic “food ready” beep of the microwave continued, unnoticed.

They were a part of the Ripper's legend: the way the light refracted in his oddly shaped pupils whenever he was angry, so that they seemed to burn with an inner flame. Those who had seen that red glint and lived to tell about it thought that it was like peering into the depths of hellfire itself. The flames behind those pupils leaped and danced, as if to a tune that only Beelzebub and Jack Gregory could play.