Read In a Cowboy’s Arms Online

In a Cowboy’s Arms 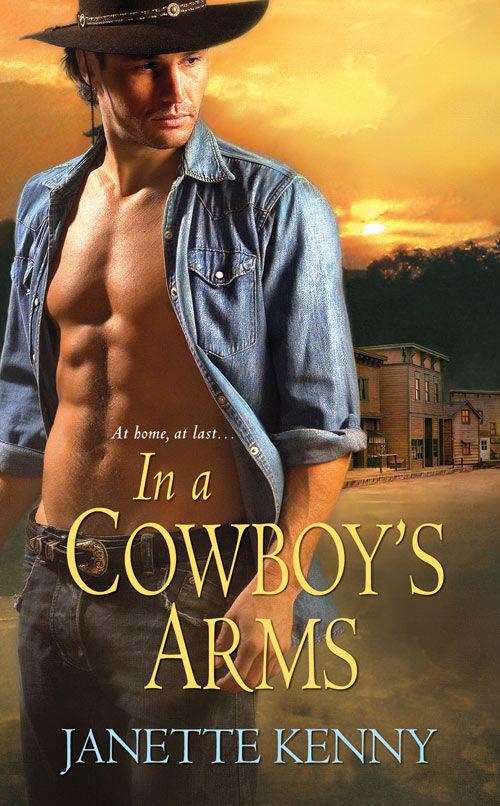 “You should have waited for me to help you down,” he said, though there was no heat in his words as he untangled her skirt from her heel.

“I didn’t want to be a burden.” But she’d become one anyway, and my, didn’t it feel wonderful to be in his arms.

Before she could extract herself from a position that was far too cozy and too comfortable, he turned her to face him. She looked up at him, expecting a lecture on being impetuous to follow.

He cupped the side of her face in one palm, and the glide of his thumb over her hot cheek sent a delicious shiver coursing through her.

“Beautiful, independent Maggie,” he said. “What am I going to do with you?”

“What do you want to do?” she asked, a bit shocked by her own boldness.

A low sound rumbled from his chest, but she scarcely heard it over the hammering of her heart. And then he did just what she’d dreamed he’d do.

He lowered his head and captured her lips with his. This wasn’t the tentative peck that she’d expected.

She felt safe, desired. She felt his need in his touch and the change in his body, and an answering want zinged along her nerves. She was startled by her own electrifying response.

In a
Cowboy’s
Arms

All Kensington titles, imprints, and distributed lines are available at special quantity discounts for bulk purchases for sales promotion, premiums, fund-raising, educational, or institutional use.

It wasn’t yet ten in the morning, and Dade Logan was already bored clean out of his mind. Other than locking the town drunk up every Friday night when he got a snootful, there wasn’t much in the way of law to enforce in Placid, Colorado.

Not that he was anxious for trouble to come to this sleepy town that rested in the valley east of the Sangre de Cristo Mountains. Nope, he’d been waiting all winter for one person to return, and if she didn’t show up soon he didn’t know what the hell he would do.

The hiss of the locomotive and clang of the rail cars pulling out echoed up the main street of Placid. Two folks had boarded the Denver & Rio Grande, heading east to Pueblo. He hadn’t seen anyone get off.

Maybe she’d arrive on the afternoon train. As the racket from steel wheels on rails grew faint, he heard his name being called out.

Dade smiled. Raymond Tenfeather was pounding down the boardwalk somewhere between the stable and the jail, hollering out his name like he did every day about this time.

When the liveryman’s younger son wasn’t trailing his elder brother Duane around town, he had taken to following Dade on the pretext of helping him look for lawbreakers. Dade had gently explained that wasn’t necessary, but the boy took it on himself to be the town spy. God only knew what Raymond had seen this time.

Dade rocked back in his chair and stacked his crossed boots on the edge of his desk, awaiting the boy’s imminent arrival. As always, his gaze narrowed on the wanted posters tacked on the wall.

Dammit all if the three outlaws staring back at him weren’t smirking. His pa and uncles would find it amusing that Dade had taken an oath to uphold the laws that Clete, Brice, and Seth Logan had been hell-bent on breaking all their lives.

It’d been twenty years since he’d seen any of them, though their wanted posters had haunted him most of his life. There sure as hell wasn’t any love lost between him and his kin.

Yet one question nagged at him right after they pinned a tin star on his chest. If his pa and uncles came to town, could he draw on them?

Part of him said yes. His pa had had no qualms about deserting him and his little sister. Yet when all was said and done, he wasn’t sure he could turn on his blood. Hell, unlike Reid Barclay, he couldn’t have turned on either of his foster brothers either.

“Sheriff Logan!” Raymond burst into the jail, his dark skin glistening with sweat and his scrawny chest heaving from his run. “I saw her.”

“The lady you been waiting for,” Raymond said.

The boy nodded. “She got off the train, just like you was hoping she’d do.”

Now how the hell had he missed seeing her?

Dade’s heart took off galloping at the thought that sticking around here had paid off. His missing sister had finally come back like everyone in town said she would.

For the first time in months he visited that dream of buying a nice little farm for them to call home. He could run a few head of cattle. Do a bit of farming. Hell, he could find his brother Trey and bring him into the deal.

It was a damn sight better thing to dwell on than the idea of going back to the Crown Seven and having it out with Reid, the foster brother who’d sold them out when they needed him the most.

First things first. He’d waited twenty years to find his sister. He wasn’t about to waste a second forestalling their reunion.

“Where is she?” he asked, heading for the door as he spoke.

The place where Daisy and her crippled traveling companion had stayed before. Mrs. Gant had told him about their visit to Placid. How Daisy had caught the young sheriff’s eye. How she’d promised to come back last fall and marry Lester.

But the sheriff was dead, spring was in full bloom, and nobody in town had any idea where Daisy Logan and her lady friend hailed from.

Dade figured she’d heard about Lester’s murder and wasn’t coming back to Placid. He feared he’d lost her again.

“Thanks, Raymond.” Dade flipped the boy a silver dollar and headed out the door.

Long determined strides carried him across the dustystreet. He wondered how much Daisy had changed. Would she recognize him? Would she be as glad to be reunited with her family as he was?

He’d find out damn soon, he thought, as he cut down the street between Hein’s Grocery and Doc Franklin’s house.

Mrs. Gant’s boardinghouse sat the next street over, but the elevation made the walk seem farther. He bounded up the steps then paused at the door to steady his breath.

The climb was nothing, but the excitement pounding inside him made it hard to draw a decent breath. He blew out the air trapped in his chest, inhaled deeply, and stepped inside.

Mrs. Gant was in the parlor, serving tea to a lady seated on the stiff Victorian sofa. Neither seemed to have heard him come in.

That was fine by him, for it gave him time to study his sister. Her golden hair had darkened to a rich honey. Her features were still delicate and refined, but she didn’t resemble their mother or father.

She wasn’t a cute little pixie anymore. Nope, she’d grown into a beautiful woman with all the curves in all the right places. But it was the odd combination of grief and fear in her eyes that gave him pause.

“I am so sorry to be the one to tell you that Lester has passed over,” Mrs. Gant said, verifying what Dade suspected had caused his sister’s distress. “I didn’t know where you’d gone, but when you didn’t come back last fall like you said you would, I thought maybe you’d heard.”

“It was just awful,” Mrs. Gant said. “This ruffian came to town, intent on robbing the bank. Lester was there, and before he could turn and confront this no-account, the ruffian shot him dead.”

Daisy pressed a hand to her mouth, clearly horrified bythe news. Mrs. Gant’s version was close enough to the truth that Dade didn’t see the need to comment.

“I tell you truly,” Mrs. Gant said, “I shudder to think what would’ve happened if Dade Logan hadn’t stepped in like he did and ended the robber’s reign of terror on our town. No telling who else would’ve been gunned down if not for your brother’s courage.”

Dade winced. The townsfolk had taken to embellishing the events of that day to the point Dade cringed every time he heard it. Now was surely no exception, for Daisy’s face had leached of color at the mention of his name.

“W-what?” Daisy said in a voice that was way too high.

“Yes, indeed, your brother is a hero.” Mrs. Gant launched into telling Daisy the details.

This surely wasn’t the reunion he’d had in mind. A sound of disgust must’ve slipped from him for Mrs. Gant glanced his way and smiled.

Daisy, on the other hand, looked ready to bolt as her head snapped up and her gaze clashed with his. Instead of recognition lighting her eyes, they narrowed with suspicion and something bordering on dread.

Mrs. Gant patted Daisy’s hand. “It’ll be all right now, dear. You have family to help you through this difficult time.”

Dade scrubbed a hand across his nape, frustrated and more than a mite worried about his sister’s increased distress. He wasn’t surprised that Daisy hadn’t recognized him after twenty years, but forgetting that he existed signaled something else entirely.