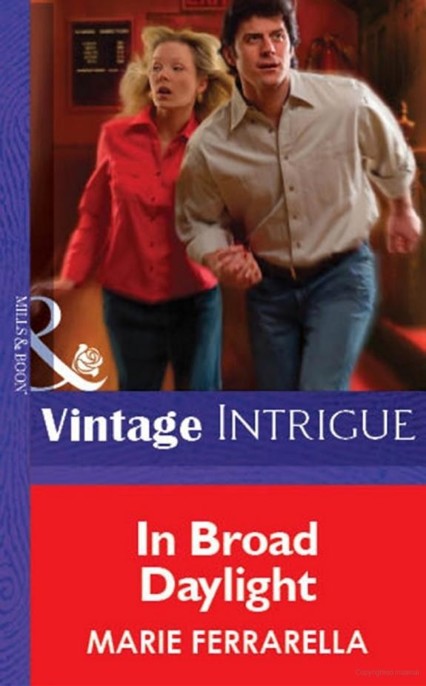 There was nothing he hated worse than a kidnapping case.

Maybe it was because he was acquainted firsthand with the situation. His Uncle Andrew

and the family had gone through all sorts of personal hell when his Aunt Rose had vanished.

It was fifteen years before they'd any answers.

The torture was in not knowing.

The torture was in the various awful, haunting scenarios that your mind could drag up

despite your best efforts to block them.

In his personal opinion, Dax thought as he took a street that led him to a prestigious

address, every kidnapper should be left for ten minutes with the families of the victims.

That's all, just ten minutes. And then justice would be served. But he was sworn to uphold

A tangle of two fire engines and one ambulance, each belching personnel onto the front

lawn of the very privateHarwoodAcademyless than twenty minutes ago, made finding a

ten minutes of the beginning of the annual Rose Bowl Parade.

"Looks like this is the place," his partner, Nathan Brown, commented.

"Yeah, and it looks like everyone else has found it ahead of us."

Muttering a frustrated expletive, Dax brought the vehicle to a forty-three degree angle

against a late model Mercedes in the small parking lot, unfolded his large frame and got

out, slamming the door behind him.

Gregarious and outgoing, the eldest son of Brian Cavanaugh, chief of detectives of

theAurora,California, police department, Dax was known for his easygoing humor. But not

today. Nothing sobered him faster than a kidnapping. Especially the kidnapping of a child,

as this was reported to be.

He glanced toward his right, to assure himself that Nathan had gotten out and was

keeping up as he cut across the lot. Nathan was as short as he was tall and on unseasonably

hot days like today, he liked to complain about his "freaky, stork-like legs." To which Dax would respond by saying something about his partner's stubby limbs.

But no such banter took place today. Because a six-year-old girl might be missing.

Dax held a good thought. It was in his nature, a special "Cavanaugh gene" that resided in about two-thirds of the family and shone like a beacon during the darkest of times.

Dax scanned the area, taking in the outer chaos quickly.

The lawn and lot were filled not with only cars and firefighters, but well-groomed,

uniformed children. The last batch, coming in various shapes and heights, were being

shepherded incredibly well by their teachers. There was noise and confusion everywhere.

The firefighters appeared to be retreating. The emergency medical personnel, who had

arrived on the tail of the second fire truck, were packing up. The opened rear doors

showed Dax that they had no one to take back with them.

Dax sniffed the air. The smell of smoke was conspicuously absent.

"Looks like they're all dressed up with nowhere to go," he commented, looking at a team of firefighters who were retracting the hose that had ultimately not been necessary. It had

been usurped, he later discovered, by a fire extinguisher.

Nathan squinted, looking toward the unharmed four-story building that housed the

academy. "Kind of elaborate for a fire drill," he quipped.

"This was no drill," Dax commented.

The children, he'd noted, seemed more excited than frightened. He remembered the

monotony of his own school days. An honest-to-gosh fire would have been more than

welcomed to break up the tedium that marked his less than auspicious elementary career.

He hadn't figured out that he liked learning until somewhere midway through high school.

He wouldn't have fit in here, Dax judged as he and Nathan picked their way through the

pint-sized throng. These were the children of the wealthy.

Wealth came in all sorts of forms. In his family wealth was the amount of love available at

any given moment of the day or night. Dollars, at times, had to be stretched, but love

Even for him. And he had been a wild one, turning his late mother's dark hair gray way

before its time, he thought fondly.

One pint-sized student stood directly in his path, looking up at him as if he were a giant

oak tree. Curiosity was imprinted on the boy's face. Dax gave him an obligatory smile and

stepped to one side.

"What do you think it costs to send your kid here?" Nathan asked, raising his voice to be heard above the commotion.

Nathan had three kids, all of whom were under the age of twelve. Remembering his own

household with its rabble of four, Dax figured Nathan's wife had sainthood pretty much

He laughed dryly at his partner's innocent question. "More than you and I make in a year,

Nathan blew out a breath and nodded. The academy, established some fifty years ago by

the grandfather of the present headmaster, had been the first place of learning for some

of the present captains of industry, both within the world of business and in the

entertainment world. If rumors he'd picked up were true, a couple of senators had

emerged from these halls as well.

"Hey, the public school system's not all that bad," Dax pointed out. "You and I went through it and we turned out pretty good."

Nathan spared him a long look. "Well, at least one of us did." Suddenly, the shorter man was alert, spotting the person he figured they were both looking for. "Nine o'clock,"

"Yeah, that and the fact that I'm short a hundred-thousand dollars for the tab." Nathan sighed. He tried to match Dax's stride as the latter lengthened his. "Damn it," he barked, lowering his voice again because of the children who appeared to be everywhere, "slow

Dax grinned at the jive. He bore about as much resemblance to the Washington Irving

character as a sunset bore to a light bulb. Tall, broad-shouldered, with a small waist that

came from more than a passing acquaintance with the department's gym, Dax had his

Women, much to his partner's wistful envy, threw themselves at Dax. He was good at

catching them, then setting them down. Life was too unsettled for the kind of long-term

commitment a relationship would have asked of him. Besides, he was enjoying himself and

in no hurry to have that part of his life over. If he felt the need for family, hell, there

were his siblings and his cousins to turn to. At last count, the younger Cavanaughs

numbered eleven. There was always family to spare as far as he was concerned.

Nathan checked his pocket for his pad. "Think this was all a mistake, like the fire?"

The expressions he observed on the teachers' faces looked too worried, too concerned. It

herded back into the building and their classrooms.

Just before he reached the headmaster, a stately looking man whose iron-gray hair made

him appear older than his chronological years, a young woman got into his line of vision.

The instant she did, his eyes were locked on her.

For a second Dax almost forgot to breathe; she was that startlingly beautiful. The kind of

populated the checkout area of his local supermarket. The kind of beautiful he wouldn't

have believed was real, or could be achieved without a great deal of powder and paint; both

of which would have been visible in person.

Except it wasn't. The young woman before him with the spun-gold hair appeared to be all

As air returned to his lungs, he felt his pulse quickening the way it did whenever he was

confronted with a life or death situation. But this was neither. Gorgeous or not, she was

just another person who was there, he reminded himself.

And he had a job to do. There was a little girl who was presently unaccounted for.

"Mr. Harwood?" Dax's deep voice cut through the din as easily as a sword cut through

Matthew Harwood looked away from the young woman he was talking to, proper concern

etched with stately precision on his square face. He looked weary as well as wary.

"I'm Detective Cavanaugh, this is Detective Brown,"Dax nodded behind him, doing his best to ignore the woman on Harwood's left. "You reported a missing little girl."

"I reported it," the woman who had altered his breathing pattern responded before

Harwood could say anything. "Her name is Annie Tyler and she's in my class."

Which placed her in the first round of questioning. He'd hit a jackpot at a time when he

couldn't afford to be distracted, Dax thought. And if ever there was a woman who was

distracting, this was one.

Nodding at the information, he looked around. "Is there somewhere where we can go and

As if second-guessing him, Harwood was already waving over an aid. "Mrs. Miller, could you

Droplets of disappointment, materializing out of nowhere, rained over him. But maybe it

was better this way. He was good at perpetually keeping several balls in the air at the

same time, but the law of averages was against him. Someday, one of those balls was going

to drop and he couldn't allow for it to be one associated with his work. He loved being a

cop, loved making a difference. Loved the rush when a crime was finally solved, or a

perpetrator was brought to justice.

Or a child was recovered,he underscored. That meant focusing exclusively on the job.

Focused or not, glancing at the woman's hand seemed only natural.

There was no ring on the appropriate finger.

Not his concern,the same harsh voice that had long ago been assigned the role of his

personal devil's advocate whispered within him.

Mrs. Miller was a pleasant-faced, full-figured woman who radiated enthusiasm and

sunshine as she approached. She also radiated concern as her eyes shifted to the blonde.

We. As if they'd somehow misplaced the child. Was the little girl given to pranks? To

disappearing from sight, only to watch from a secret hiding place as pandemonium ensued?

Was this a bid for attention? So many of these kids hardly cohabited with their parents

at all and were desperate for attention.

"I'm sorry, you are…?" Nathan was asking the blonde before he could.

"Brenda York." Brenda put out her hand. When Dax took it, he thought it felt icy. As if she was worried. Or afraid. "I teach first grade."

His own first grade teacher had been a Mrs. Flack, a short, squat woman with bottle-

peppermint because she always seemed to be sucking on the candy, something her

students, unfairly he thought, weren't allowed to do. Had Mrs. Flack looked remotely like

Brenda York, he might have discovered the pleasure of learning a lot earlier than in high

"This way," Harwood directed, pointing toward the front entrance.

Behind them, the last of the firefighters were getting onto a truck. The first truck had

already pulled away. The din that had been humming since before their arrival was

gradually fading into the warm May air. It amazed Dax how quickly order was restored.

vacated for such a brief amount of time. The excitement of the fire, real or imagined, was

over. The teachers had obviously done their level best to keep the news of the possible

abduction from spreading and reaching any young ears.

Dax glanced over his shoulder, watching the students as they resumed a tight formation

I Have Landed by Stephen Jay Gould
Horse Trouble by Bonnie Bryant
Blood and Faith: The Purging of Muslim Spain by Matthew Carr
See Jane Score by Rachel Gibson
Leningrad 1943: Inside a City Under Siege by Alexander Werth
Knotted by Viola Grace
Infinity Reborn (The Infinity Trilogy Book 3) by S. Harrison
Pure Heart: Anything for You Series - Book 1 by Wynn, Ann
Flight of the Earls by Michael K. Reynolds
Venetian Masquerade by Suzanne Stokes
Our partner