Read In Need of a Good Wife Online

In Need of a Good Wife 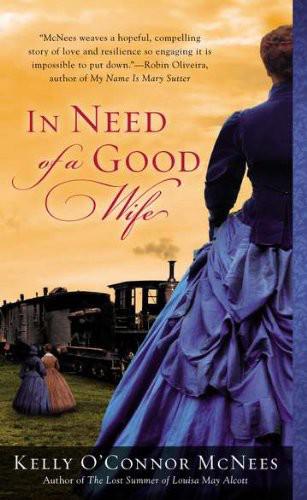 In Need of a Good Wife

“
In Need of a Good Wife
is as wonderfully candid as it is epic. Kelly O’Connor McNees creates unforgettable heroines (and anti-heroines), and infuses dreams of the American West with fresh spirit, humor, and yearning. I love this novel so much!”

“You will fall in love with the brave, resourceful women in this utterly captivating novel—some beautiful, some worn but not defeated, all amazingly resilient—as they travel across nineteenth-century America to a small, dingy town in Nebraska to marry strangers and make better lives for themselves. Kelly O’Connor McNees writes with warmth, drama, humor, and tenderness, of love, loss, and hope, and how happiness can be found in the most unlikely situations if you open your heart.”

“The three central, compelling women of
In Need of a Good Wife

are each, in turn, terribly lost and deeply brave. I adored them and rooted for them in their struggles, worrying about them when life forced me to set the book down to eat, work, and sleep. I found it deliciously satisfying that the redemption I wished for each of them arrived in completely unexpected ways, taking both me and the characters by surprise.”

—Katrina Kittle, author of
The
Blessings of the Animals

“Life kicked ‘Bixby’s Belles’ in the teeth, but they got back up for another round. Their determination inspires as their story captivates. With graceful prose and historical settings that shine with vitality,
In Need of a Good Wife
is unforgettable.”

“Rare is the book these days that captures my undivided attention, but this story enchanted me, reminding me of a time in my life when reading was a comforting adventure, and my hope was to fall in love with a book and its characters. Painting vivid images of the poverty of post–Civil War Manhattan City and the harrows of Destination, Nebraska, McNees weaves a hopeful, compelling story of love and resilience so engaging it is impossible to put down.”

—Robin Oliveira, author of
My Name Is Mary Sutter

“Reading
In Need of a Good Wife
is like going on a great adventure into the past. As you turn the pages, you’ll find love, imagination, and a kind of charm I didn’t know existed anymore. It’s a wonderful book—sturdy and delicate all at once.”

“
In Need of a Good Wife
is a beautifully wrought story, every page bursting with poetry and adventure. McNees sweeps us west with such hope and excitement that we ache and rejoice, celebrate and cry as Clara Bixby’s band of mail-order brides leaves behind the bustling streets of New York City to search for new beginnings on the flat Nebraska landscape. A simply gorgeous book that will stay with you long after you read the last word!”

—Susan Gregg Gilmore, author of
Looking for Salvation at the Dairy Queen
and
The
Improper Life of Bezellia Grove

“Anyone who grew up on
Little House on the Prairie
will instantly fall in love with this book. Kelly O’Connor McNees brilliantly captures the hope and hardships of the American West, and has created a story destined to be a classic.”

“Vivid, generous, funny, and often quite moving,
In Need of
a Good Wife
casts light on a little-known corner of American history—and the women (and men) who struggled to make their way in an unforgiving world.”

“
In Need of a Good Wife
is a thoroughly charming novel, written with a gentle wry humor and an eye for detail I found delicious. Clara, the gutsy heroine, is delightful, as are a number of the other characters, the good and the bad alike. Beautifully imagined, beautifully crafted: I absolutely loved it.”

—Sandra Gulland, author of
Mistress of the Sun

“Kelly O’Connor McNees has written a warm, generous story of women who leave everything behind to take a chance on a better life halfway across the country. She combines vivid historical detail with such emotional accuracy that I was convinced I, too, needed to escape grimy post–Civil War Manhattan and make the long train journey to Destination, Nebraska, where “even the name of the place suggested plenty:
Nebraska
sounded like
basket
.”
In Need of a Good Wife
is a richly drawn portrait of a uniquely American experience; this novel is an absolute treasure.”

THE LOST SUMMER OF LOUISA MAY ALCOTT

IN NEED OF A GOOD WIFE

This is a work of
fiction. Names, characters, places, and incidents either are the product of the author’s imagination or are used
fictitiously, and any resemblance to actual persons, living or dead, business establishments, events, or locales is entirely coincidental. The publisher does not have any control over and does not assume any responsibility for author or third-party websites or their content.

BERKLEY® is a registered trademark of Penguin Group (USA) Inc.

To RAM and WJM.

“They had three in the family, and that’s a magic number.”

“There is a saddle horse especially for me and a little

shotgun with
which I am to kill sage chickens.”

—Elinore Pruitt Stewart, writing to a friend about her new life on the prairie in
Letters of a Woman Homesteader

The oak planks in the floor of Rathbone’s basement tavern, Clara knew, were lined with invisible cracks. The men who drank at the tavern brought the filth of Manhattan City in on their boots, manure from the street and muck from the floor of the omnibus, and the men’s careless steps ground the dirt into the floor. If Clara didn’t whisk it out quickly enough with her broom it would lodge in the cracks, and the planks would split down the middle. Mr. Rathbone would have to replace them—an expense that might make him think twice about how badly he needed a barmaid on his payroll.

The thought straightened Clara’s back and she stretched it, the long fingers of her right hand clenched around the handle of her broom, before resuming her chore. It worried Clara, the possibility of losing the job, and, in losing that, losing everything—the money she made only just paid for her room and board upstairs at Mrs. Ferguson’s with scarcely enough left over to keep body and soul together. Of course, if her father were still alive, things would be different. But he wasn’t—he had died in debt back when the tavern was known by his name, as Wilson’s, and Mr. Rathbone had bought it for a song.

Clara supposed she should be glad for it. It wasn’t easy making a go of it in these times. Rathbone had already lost what meager business they could muster to the new place across the street, the Eagle Tavern, which sold ale at half price for the first hour of the evening rush each night. The roughs lined up around the block, the very same roughs who had previously done their drinking at Rathbone’s long walnut bar. Clara had no love for any of them—in fact, she detested drinking in a man, thought it made him weak and womanish—but what did fate hold for Rathbone’s without them? Here it was, the middle of the noon meal and there wasn’t a soul in the place. Each morning, as Clara polished that bar, its burled grain like marks left in the sand by the waves on Long Island Sound, she prayed that come evening, Rathbone’s would be full of men either too happy or too full of dread to go home. She didn’t care which it was, as long as the men kept sliding coins toward the till. Of course, Clara indulged in using a little too much wax from time to time, buoyed by the thought that she could make the surface slick enough to yank the men’s hands out from under their sorry jawbones, send their chins crashing down onto the hard wood.

Clara’s survival depended on the loyalty of fool drunks, and she did not take kindly to this fact. But the drunks didn’t scare her either. She had stood up to plenty of them in her time, once separating a pair of scuffling men by clobbering the bigger one in the back of the head with her rolling pin.

At half past one, two men dressed in black came in and took a small table by the window. One was lanky and tightlipped and the other was fat, with a wide face like a camel’s. His smile seemed to stretch all the way from one ear to the other. He rubbed his hands together as if to warm them, but it was, Clara had noticed when she descended the stairs from her room at Mrs. Ferguson’s that morning, a perfectly pleasant October day.

“Miss?” said the heavy man, waving Clara over with his hand. She took her time leaning the broom up against the wall and making her way across the room to them. As she walked, she recognized something in her own slow amble and realized it was a memory of her mother, who had walked this way, seven balky children underfoot and a husband with a temper like a festering sore. Mrs. Wilson lived long enough to see three of her children make it to adulthood, Clara and two sisters. Maura had run off with a prospector six years back and hadn’t been heard from since. Frances was hit by a streetcar the following year. Once there had been nine Wilsons, but now there was just Clara.

“If there is any justice in this world our Creator made, Reverend Potter, they will be serving a chicken pie,” the fat man said. “I’ve heard it’s the best in the city.”
Well, there you have it
, Clara thought.
I pray for customers and the Lord sends me a couple of holy rollers. I’ll be lucky if they order coffee.
Truth be told, Clara
was
a bit flattered to hear them talking up her pie. She had been the one to suggest to Mr. Rathbone that the tavern should serve a proper meal at midday. Their competitors served only hard-boiled eggs and pickled herring on crackers—a pauper’s meal.

Reverend Potter, his fine hair precisely combed and oiled, glanced skeptically at the small, grease-clouded window that looked up to William Street. Pigeons shuddered by, and the broad hems of pedestrians’ skirts passed like great gray ships on the sea. “I’m not convinced anything good can come,” he said, “from a kitchen with a rat’s-eye view of the world.”

The Spoon of Doom by Sam Hay
Day of the Assassins by Johnny O'Brien
What's Yours is Mine by Quinn, Talia
The Secret Rose by Laura Landon
Rogue Wave by Susan Dunlap
Double the Trouble (Texas Trouble 3) by Becky McGraw
The Nutcracker Ballet Mystery by Carolyn Keene
Raptor by Jennings, Gary
10 Date with Destiny - My Sister the Vampire by Sienna Mercer
The Golden Eagle Mystery by Ellery Queen Jr.
Our partner