Read In Search of Memory: The Emergence of a New Science of Mind Online

In Search of Memory: The Emergence of a New Science of Mind 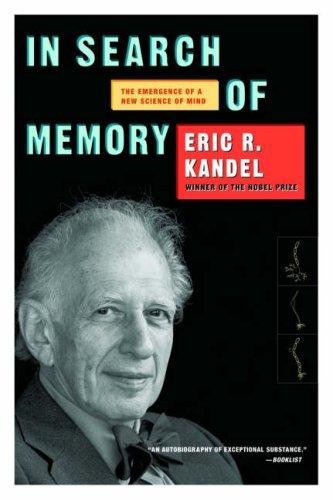 Additional Praise for
In Search of Memory

“If there is another book that does a better job of demonstrating how biological research is done, or of telling the story of a brilliant scientist’s career, I don’t know it. Nor do I know one that better conveys the unique excitement that drives the success of research and permeates the thinking of its most able practitioners, or that gives a better descriptive narrative of the historical evolution of our understanding of mind.”

“An autobiography of exceptional substance.”

“This intellectual autobiography presents a fascinating portrait of a scientist’s formation…. An important account of a creative and highly fruitful career.”

“Kandel’s memoir excels…. I recommend this book to anyone interested in the life and work of a major scientist—or, indeed, the course of science in our time…. Kandel’s finely executed work might well seduce talented students to further the work that he has so impressively launched.”

“In Search of Memory
is a scintillating mix of memoir, history of science, and fundamental biology without peer. It shows compellingly what first-rate science is and how it is created.”

—E. O. Wilson, author of
The Creation, Consilience,
The Diversity of Life
, and
The Future of Life

“Eric Kandel has written a stunning book which moves, almost with a single breath, from first to last, and gives an extraordinary picture of this last incredible half-century of neuroscience. Kandel seamlessly weaves together the personal and the scientific, and brings out the great web of influences and interactions which make science the most communal enterprise in the world.”

—Oliver Sacks, author of
The Man Who Mistook His Wife for a Hat

“An enchanting book that has a broad historical and conceptual sweep…. A lucid and comprehensive overview of developments in neuroscience during the 20th century…. In short,
In Search of Memory
is a must-read account of science and a life, with all the associated joys and sorrows. It provides an insightful perspective on how first-rate research is carried out. One encounters a fascinating and persistent person who pursued the quest for his own Holy Grail and found it.”

“Written with talent and grace, this extraordinary book by one of the greatest scientists of the mind alive will be read with delight by general readers as well as by students and scholars.”

—Elie Wiesel, author of
Night
and
The Time of the Uprooted

“Few can interlace their autobiography with the evolution of a scientific paradigm. Even fewer can weave such a story seamlessly. Eric Kandel is one of these…. Kandel’s book is enthusiastically recommended as a captivating account of the career of a prominent leader in contemporary neuroscience. The author is not only an authoritative scholar, but also a marvelous popularizer and narrator…. [Kandel] brings to the story an attractive mix of facts, personal touches and wisdom, seasoned with reflective humor.”

“Beyond autobiography, the book is also an accessible introduction to contemporary neuroscience, the study of how the brain produces thought and action. Included are brilliant vignettes on the history of neuroscience.”

“Eric Kandel’s book could not have been written by anyone else. It deals with science through the lens of an entire life, at once eventful and blessed. We are led by Kandel’s life-affirming enthusiasm and by his steely determination. This is recommended reading for anyone looking for a personal view on what we know about brain and memory, and also for anyone contemplating a career in science.”

and
Looking for Spinoza

“A wonderful self-help book for those who seek a Nobel Prize…. At once a personal history and a scientific tour de force…. This compelling book would make a great motion picture. Aplysia may not be Hollywood handsome, but what a character!”

“Kandel deftly weaves together his own personal and intellectual biography alongside a masterfully narrated history of the evolution of the science of the mind…. Kandel’s explanations of even the most elaborate of biological concepts are lucid, and most are accompanied by clear and helpful illustrations…. Intertwining the scientific, historical and biographical narrative strands gives the work an appeal uncommon in books about serious science…. Kandel’s enthusiasm for his own work or that of his colleagues is so catching that the science, quietly conducted in labs, appears as thrilling and adventurous as a treasure hunt.”

“[
In Search of Memory
] is an intimate tour of modern neuroscience. Here is a book about the discovery of the biological basis of memory that has been written, essentially, out of one’s man prodigious recollections.”

“
In Search of Memory
engagingly recounts Eric Kandel’s bold life at the frontier of brain science, where his molecular biological approach has revolutionized human understanding of how information received by our senses becomes hard-wired.”

“The weaving of science and memoir, in a clear and unadorned style, is especially effective.”

“What comes through vividly…is the passion and enthusiasm of a leading researcher working in intellectually revolutionary times. Recommended as a first book to read for anybody with a more than merely curious interest in the subject.”

“Kandel has masterfully woven diverse themes into a beautiful tapestry….
In Search of Memory
is crisp, clear, and compelling…. [Kandel’s] writing is equal to that of the best historians…. Kandel’s book promises to do for neuroscience what
The Double Helix
has done for DNA.”

“The life story Kandel tells is fascinating, the science he describes is ‘comprehensive’ yet ultimately accessible, and, with any luck, this ‘finely executed work’ will seduce a new generation of talented students to carry his impressive legacy forward.”

“Eric Kandel has written a gripping memoir of the European twentieth century that any author might envy. He has also written an American account of discoveries in the neurosciences that any scientist might envy. Both genres are skillfully intertwined in his civilized, generous, and stylish book…. Kandel’s prose is limpid, his story-line clear and compelling; indeed, most of the book is as accessible to the layman as to the scientist. It’s hard to put down.”

Psychiatry, Psychoanalysis, and the New Biology of Mind

Memory: From Mind to Molecules
(with Larry Squire)

IN SEARCH OF MEMORY

The Emergence of a New Science of Mind

1. Personal Memory and the Biology of Memory Storage

2. A Childhood in Vienna

9. Searching for an Ideal System to Study Memory

12. A Center for Neurobiology and Behavior

13. Even a Simple Behavior Can Be Modified by Learning

15. The Biological Basis of Individuality

19. A Dialogue Between Genes and Synapses

20. A Return to Complex Memory

22. The Brain’s Picture of the External World

23. Attention Must Be Paid!

27. Biology and the Renaissance of Psychoanalytic Thought