Read In the Drink Online 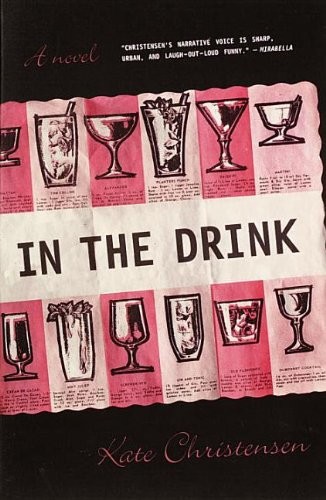 Praise for
kate christensen’s
in the drink

“Like Bridget [Jones], Christensen’s Claudia Steiner is a mess … but Claudia is endearing because she remains appreciative of her own grittiness.”

“Like its protagonist, Christensen’s book is funny and intelligent, filled with dead-on New York character types and locales.”

“At a time when authors are penning bestselling memoirs about their alcoholic torment, and 12-step programs are as popular as SUVs, Christensen’s take is refreshing.”

“Hilarious, decadent, painfully honest, and sparkling with wit and originality,
In the Drink
is the perfect ’90s love story, a tale for anyone who’s ever had a few too many shots of bad whiskey, bad jobs, mornings after, and pinings for that person they can’t stop thinking about. With this exuberant first novel, Kate Christensen bursts onto the literary scene.”

“If
In the Drink
were a beverage, it would be spilling over with character development.”

“Kate Christensen’s language bristles with poetry; her wit crackles with insight. This rite of passage to the literary and sexual landscape of New York in the 1990s is easily one of the best first novels I’ve ever read.”

“Read
In the Drink
because it’s about a girl who knows exactly how it feels to be us. For a change.”

Kate Christensen is a graduate of Reed College and the Iowa Writers’ Workshop. She lives with her husband in Brooklyn, New York, where she is writing another novel.
In the Drink
is her first book.

Anyone who has never floundered or failed
can be expected to have little patience
for those who do.

“Dear Mrs. Skye,” I found myself writing one afternoon, “Thank you so much for your fascinating letter. Of course I’m thrilled that you liked my new book as much as the first one, and I’m delighted to hear that you share my aims concerning the establishment of a strict death penalty in every state.”

I stopped writing and yawned, then leaned back in my chair and stared up at the ceiling as if casting my eyes heavenward, praying for rain or succor. I noticed small heaps of dead moths piled up inside the chandelier’s glass tulips, each as small and dry as a flaked-off chip of gray paint. I looked up through the glass at them for a while, wondering idly why, over all the thousands of years since the discovery of fire, moths as a species hadn’t stopped getting sucked into lamps and fireplaces and candle flames and lanterns and streetlights—wasn’t that exactly the sort of thing evolution was designed to correct? They
deserved to sizzle to death on lightbulbs if they were too stupid to figure it out. It served them right.

I yawned again, flicked my eyes over the paragraph I’d just written and found absolutely nothing there worth reading. It was one-thirty. I got off work at five. Images from last night arose and faded: the International Bar, dark wainscoting beneath mottled-eggshell walls strung with Christmas-tree lights, my friend Frieda’s face across the table, alight with laughter. “You’re
kidding
, Claudia, you’re making that
up.”
Often after I’d got four or five drinks down my gullet, I would find myself telling stories about Jackie. My audience’s laughter always made me feel much better about my job. Afterwards I rolled merrily home, fell into a deep sleep and awoke feeling like a brand-new daisy in a sunlit meadow, filled with fresh hope that maybe today was the day my real life would start.

That it wasn’t, and wouldn’t be any time soon, generally hit me every afternoon around this time. It was just hitting me now.

“Certainly,” I wrote on, “taxpayers’ money is wasted on keeping murderers alive, and would be put to better use deporting illegal aliens and making the streets safe for law-abiding citizens such as you and I. It is for intelligent, thoughtful readers like you that I write my books. I thank you again for your kind letter. Warmest best wishes, Genevieve del Castellano.”

I printed out the letter and added it to the stack of claptrap awaiting Jackie’s signature. When I rapped on her closed bathroom door, she called impatiently, “Well, come in, Claudia.” I entered to find her sitting naked on the toilet. She held her hairpiece in both hands and clenched the phone between her shoulder and ear, talking through a mouthful of bobby pins. Her skin drooped in tissue-fine wrinkles from her bones. Her real hair was pinned into a topknot, giving her the look of a
plucked exotic bird. Anyone else in this position might have been at a disadvantage.

“Hold on, Jimmy,” she said. She put the phone on the edge of the tub, flushed the toilet and put on a dressing gown, in the interests of warmth, I was sure, rather than any modesty on my behalf. She took her sweet time pinning on her hair, chatting to Mr. Blevins, while I thought about the list of things I had to do today. “Just a moment, Jimmy darling,” she said finally, and set the phone on top of the laundry hamper. I handed her a pair of reading glasses. She placed them on the tip of her nose, took the letters from me and scanned them. The hairpiece clung to her head like some small scared animal.

“I’ve told you a thousand times,” she said to me, “you’ve got to give these people their full titles.
Ambassador
Bob Stevens.” A fleck of spittle landed on my nose from the hiss of “Ambassador.”

I had chosen not to address this particular ambassador as such because he was one of Jackie’s oldest friends and I’d thought it would be an unnecessary formality, something I’d known her to deplore on other occasions, in a different mood. I couldn’t explain this to her; she didn’t have the patience for examples of her own inconsistencies, and in any case I should have anticipated today’s standards. “Sorry,” I said, gritting my teeth. “I’ll change it.”

“You American girls are so ignorant! What would he think of me? It’s not your fault, but you just don’t have the sophistication European girls have! Give me that.” She snatched my pen and rooted through the stack, scrawling wildly. I watched her in silence. Finally she thrust it all back at me.

“Your hairpiece is askew, Jackie,” I said sweetly.

She flicked the merest pointed glance at my own hair and said, “What are you waiting for? You have a great many things to do,” and plucked up the receiver. “Jimmy dear, I have to go. I have this girl here and she needs me to show her—oh, never mind, I’ll see you tonight.”

Poor Jimmy Blevins had heard our whole exchange and must have known that I needed her like a machete in the head, but there was no possibility that he wouldn’t choose to believe her. He was a plain little gray man in a suit, but according to Jackie he was the best dancer in New York, with a tendency, she had once confessed to me, to get erections when he held her closely. Her power to inspire them plainly titillated her. She complained about him: “They never give that Mr. Blevins fresh flowers, the ones he brought yesterday are already shedding all over the rug” (the fact that he owned a funeral home never seemed to occur to her as an explanation for this), and, “I can’t bring Jimmy to that dinner, he’s not good-looking enough, what will people think?” but whenever he didn’t call for a few days Jackie would fall prey to one of her mysterious fugue states; she would ask me to leave a message with his secretary that she was “back in town.”

I went back to my dining room office and slumped over the computer. Why couldn’t she just sign the damn letters? I thought about what to drink when I got home. I had a bottle of vodka in the cupboard, and a few days ago I’d stashed half a bottle of gin somewhere safe—my underwear drawer? under the sink? Anyway, wherever I’d put it, it was still there. I rolled the decision on my tongue: vodka was clear and clean and lucidly numbing, but gin had that oily juniper-berry underbelly, a hallucinatory edge that sometimes took me out of myself. But gin was tricky, it could backfire if you weren’t careful, and who wanted to be careful?

The phone rang. “Genevieve del Castellano’s office,” I said in my throatiest voice.

La caza del carnero salvaje by Haruki Murakami
A Summer With Snow (Frosted Seasons #1) by Hallie Swanson
The Lesson of Her Death by Jeffery Deaver
The Not-so-Jolly Roger by Jon Scieszka
Halfway Home by Paul Monette
The Daffodil Affair by Michael Innes
The Ways of the World by Robert Goddard
Southern Shifters: Finding Luke (Kindle Worlds Novella) by V. Vaughn
Stuck on Me by Hilary Freeman
The Dark Net by Jamie Bartlett
Our partner