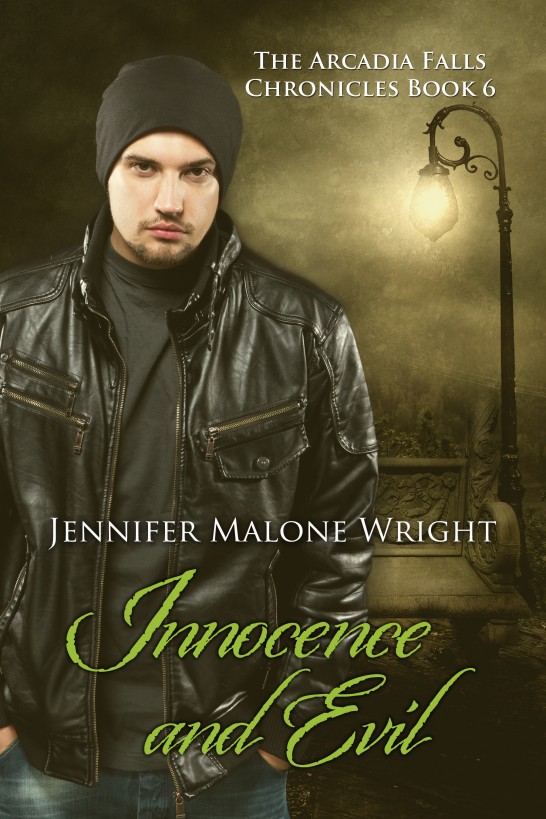 This eBook is licensed for your personal enjoyment
only. This eBook may not be re-sold or given away to other people.
If you would like to share this book with another person, please
purchase an additional copy for each recipient. If you’re reading
this book and did not purchase it, or it was not purchased for your
use only, then please return and purchase your own copy. Thank you
for respecting the hard work of this author.

This story is dedicated to every one of us
who struggle with the innocence and evil that lies within us.

As always I thank my husband, my sister and
my best friend Rose.

Finally, I would like to thank my cover
designer Paragraphic Designs and my editor Ink Slasher Editing.

OTHER BOOKS BY JENNIFER MALONE WRIGHT

Keeper of the Peace (Graveyard Guardians
#2)

Once Upon a Zombie Apocalypse – Jade (Always
free)

Once Upon a Zombie Apocalypse: Episode 2

Other
Books by Jennifer Malone Wright

Sleep would not come.

Although the mattress was comfortable
enough, I still lay there, restlessly switching between staring at
the ceiling and admiring Christina’s bare shoulders. I actually
didn’t sleep much at all anymore. I didn’t feel like I needed to
either.

So, instead of sleeping I found crap to do
around the house, patrolled our grounds for vampires, worked out
and read a lot. Yeah … I read, it isn’t a widely known fact, but I
do like to enjoy a nice fiction novel here and there. Unlike my
half-sister, Chloe, she will read anything she can get her hands
on. For some reason I can’t understand, she loves non-fiction just
as much as anything else.

Whatever. To each their own.

Having insomnia sucked big time. I always
thought it would be great having all those extra hours to get stuff
done, but in reality you want to sleep … you
need
to sleep,
and the precious calm of slumber simply never comes.

Shadows played on the walls, lit by the dim
glow of the moon shining through my window. I breathed in the brisk
fall air and shifted onto my side. Christina’s eyes didn’t even
flutter as my weight dipped the mattress when I moved.

Ever since New Orleans, I’d been changing.
There were physical differences which surprised me, as well as
everyone else. But, along with my growing strength and defining
muscles, mental changes were also taking place.

At first the process was gradual, but then
it came on full force. I had known that I was different after the
Warrior Angel saved me. I’d had a careless outlook on life, saving
people from vampires for the simple fact that I wanted to … and it
was fun. It was also dangerous, but I welcomed danger because I
didn’t care much about what happened to me.

After my mother passed away, I had no
purpose except to find Trevor, my father. I’d grown up knowing I
was different and wanted to understand why. I had basically been an
outcast in school, never knowing why I was so different from
everyone else and having to hide who I really was. Even though I
didn’t even truly know.

When I found the Hunters … well, when they
found me. It had been a blessing in disguise. Suddenly, there were
others who were different, other misfits who weren’t misfits at
all.

The Hunters, and Alice, and Oscar … they all
had their gifts and used them to protect the innocent. They were
different and they embraced it. Best of all, although they were
different, they were together, and they let me become one of
them.

Now, I had become the outcast once again.
The Warrior Angel came and declared that I had the soul of a
warrior, that it was my calling to eradicate the evil which dwelled
upon the earth. Well, at first I had assumed he meant vampires and
other such demons … but, I was beginning to realize that it was
much more than that.

The gradual process I was speaking of began
as just a small feeling that someone wasn’t a good person. Somehow,
I just knew that they were bad. But now it was getting worse. I
could feel the evil emanating from random people passing on the
street and the strongest urge to take them from this world
threatened to take over.

I was isolating myself. I didn’t want to be
around people. I could feel their crimes and their wrong doings.
These people were everywhere, far more than you would have ever
imagined and it drove me insane to be around them.

I don’t see exactly what they are thinking,
no, I don’t read thoughts. It’s more like a strong feeling. If a
man has killed someone, I can sense the evil, not the crime. That
is what worries me. I don’t know if I’m feeling the same thing for
a person who has stolen a candy bar as I do for one who has
committed murder.

Both are crimes, after all.

What if someone is only thinking about
killing someone, but they never intend to go through with it. These
are evil thoughts, yet the crime has not been executed. Am I
feeling the same for everyone, for even the smallest sin?

I couldn’t chance it. Therefore, I couldn’t
be around the general population, which in turn, took me back to my
misfit childhood and isolation.

The Warrior Angel had healed me, ultimately
saving me from death. So, I supposed I should be grateful for that.
But, at the same time, he had given me this gift and then abandoned
me. How was I supposed to get used to all this without help …
without someone to answer my questions.

“Zander,” Christina asked in a soft whisper.
“Are you all right?”

I turned to her and scooted closer, pressing
my body up against hers underneath the blankets. “I’m fine.” I
kissed her shoulder. “Just can’t sleep.”

I nodded in the darkness. “Yeah.”

She turned over so that she was facing me. I
could feel her dark eyes on me, trying to see if I was truly all
right. “Anything I can do?”

“No,” I answered softly. “There isn’t
anything anyone can do. I’ll have to sleep eventually.”

She sighed. “I’m worried about you.”

“I’m worried about me too,” I told her. It
was the truth, I
was
worried. Even though there were lots of
things that I liked about myself, I was turning into something
unpredictable and that was something I didn’t like.

I slid my arm around Christina, her body was
warm and inviting. She moved in a little closer and rested her head
on my arm. “I don’t know what to do to help you.”

“I don’t know if there is anything that
can
help,” I responded. “I think I just need to get used to
what I’m becoming … you know, adapt to it.”

She nodded in agreement. “Maybe, but you may
have to fight
against
what you are becoming, as well.”

This time I nodded. She was right. But, at
the same time, I had to wonder what she thought of who I was
turning into. I certainly wasn’t the man she knew when we first
met. Then, we had clicked instantly. She was this wild girl with
her long dark hair and knives hidden all over her body. While I was
a guy who drank too much and killed vampires because I felt like
it.

I still drink too much.

Whenever I fought vamps before, I’d never
been worried about hurting anyone. I did what I was doing to save
them from being hurt. This whole Warrior Angel in my own right
thing was not all it was cracked up to be.

After a long night of tossing and turning,
the darkness finally began to recede. Quietly, I pushed the covers
aside and crept out of bed. It was still early and I didn’t want to
wake Christina.

I slid on a pair of jeans with a tee shirt
and then headed out into the hall way. The house was still quiet
but I knew that Chloe and Drew would probably be up soon, if they
weren’t already. They were early risers. Christina usually was too,
but she had been sleeping in more and more lately.

Sure enough, on entering the kitchen I found
my sister and her boyfriend sitting quietly at the table speaking
in whispers. Drew had a glass of orange juice in front of him while
Chloe nursed a steaming cup of coffee.

“Hey,” I greeted them, heading for the
coffee pot.

Neither looked surprised to see me up. They
might have at one time, but now they were used to me being up at
any hour of the day or night.

“Morning,” Chloe mumbled, taking a sip from
her mug.

“What are you guys doing today?” I asked,
opening the cabinet and getting a mug for myself.

“We’re going into the city to work with the
instructors at the training center.”

I nodded. Normally, I’d have volunteered to
go with them. But now, I was stuck here. They both knew it, even
though nobody ever brought it up. Damn, how had my life become so
depressing? “You up for that already?” I directed my question to
Chloe.

Drew stared at her with his brooding glare
and wisely didn’t say anything. He knew better than any of us not
to try and tell her any different. She was stubborn as hell and
would always end up getting her way. If anyone disagreed with her,
she would just do whatever it was she wanted to do anyway. So, in
the end it was better just to go with it.

I understood that Drew was protective over
her. They had a strange relationship, like Christina and I, only
tighter I think. These were two Vampire Hunters who put their lives
at risk every day, but at the same time, they cared more about the
other than they did themselves, which could, and had, put them both
in dangerous situations when wanting to protect the other.

Drew didn’t like me all that much. It took
some time, but now we at least had a mutual understanding. Our
goals were the same, so that counted for something. Chloe was
important to both of us, and that counted for more.

I poured my coffee. “Just take it easy.
You’ve been though a lot.”

I shrugged. “Whatever. Don’t say I didn’t
warn you.”

She tossed back one of her braids and
smirked. “I won’t.”

Leaning on the counter I took a testing sip
from my mug and rolled my eyes in response.

“What about you, what’s your plan for the
day?” Drew asked.

I shrugged. “Probably going to check the
fences and cut back some of the weeds along them. That crap grows
so fast I can barely keep up with it.”

Yeah, I’d been downsized to doing the yard
work. The amazing part-vampire, part-warrior angel was now a
groundskeeper.

Chloe frowned. She knew me all too well and
probably knew I’d hate doing yard work. But I wasn’t going to sit
around and do nothing. “Why don’t you train with Christina … or
Alice and Oscar?”

Courtiers: The Secret History of the Georgian Court by Worsley, Lucy
Black Diamonds by Kim Kelly
Talent For Trouble by Bianca D'Arc
Dark Canyon (1963) by L'amour, Louis
Virus by Sarah Langan
Sweet Immortal (The Golden Collection) by Carr, Kam
WORTHY, Part 2 by Lexie Ray
Good As Dead (Dying To Meet You Book 1) by C.P. Mandara
Stardust A Novel by Carla Stewart
Sons of Fortune by Malcolm Macdonald
Our partner