Into the Wild Nerd Yonder 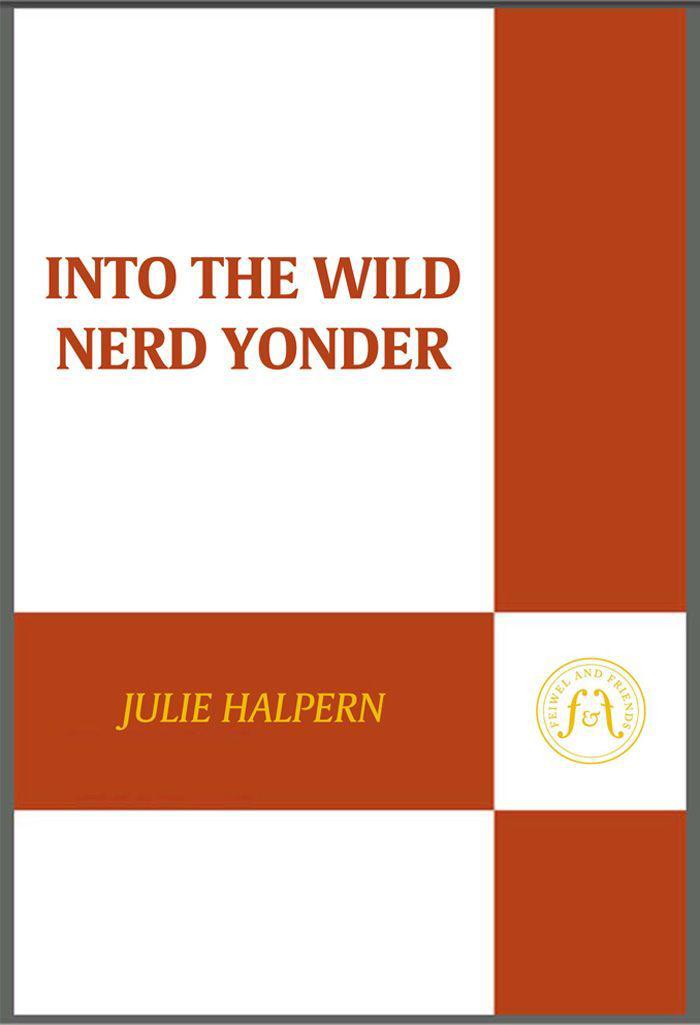 INTO
THE
WILD
NERD
YONDER

A FEIWEL AND FRIENDS BOOK

INTO THE WILD NERD YONDER
. Copyright © 2009 by Julie Halpern.

To my Dungeons and Dragons kids,

past, present, future, and every plane in between

I wanna see movies of my dreams.

I SO USED TO LOVE THE FIRST DAY of school. Ever since my mom let me pick out my first pair of first-day-of-school navy Mary Janes with the flower pattern puckered into the top, I knew I’d like the newness, yet revel in the sameness that the first day of school always brings. New pens I’ll lose after first period, new schedules with the promise of a cool new teacher or intriguing new exchange student, and new classes to ace. Not in a braggy, nerdy way, just in an I’m-smart-and-I-kind-of-like-to-study way. It’s not as though school defines me. Although, I guess I don’t really know
what
defines me. Yet. Not like my best friends, Bizza and Char. Would it be lame to say that they define me?

Elizabeth Ann Brickman, or Bizza as she’s been called since birth. (So I ask you: Why not just name her Bizza? I guess for the same reason my parents named me Jessica but call me Jessie. It’s not really the same thing, though. Jessie’s a pretty common name for an equally common girl. Unlike Bizza, uncommon in every way. Maybe that’s why her mom decided to dub her only child Bizza, like how famous people
name their kids after fruits and various other random unnamelike nouns—guaranteed un-anonymity.) Is it a name that lets someone know they’re going to be different? Is it her name that makes her cocky and clever, weird but cool, funny but scary at the same time? Can a name do all of that? Or is it that everyone at Greenville High School knows Bizza because Bizza makes herself be known? If I truly wanted to, could I become infamous, too?

Not that I want to, but could I?

And then there’s my other best friend, Char, who doesn’t seem to have to try at all. Full name: Charlotte Antonia Phillips, every bit as gorgeous as her name implies, thin, but not skinny, tall, but not imposing, and hair so thick you could use it for climbing when in distress. If she were popular in the traditional high school use of the word she would be head cheerleader or prom queen or, I don’t know, whatever else it is those “popular” people aspire to become. (Why are they referred to as “popular” anyway? That would suggest that everyone likes them, which is virtually impossible since popular people are notorious for treating the commoners like crap.) But popularity among the masses has never been anything that Bizza, Char, or I have aspired to. Which is why we’ve always been such great friends.

It started in first grade when the three of us convinced our teacher that the other students’ lives would be empty without our fabulous lip-synching rendition of the movie
Grease
, so we gathered up any first graders willing to dance in front of
people (amazing how it was so easy back then to find boys who weren’t ashamed to dance) and any girl who was fine being relegated to one of the random, nameless Pink Ladies in the background. Bizza mouthed Rizzo’s parts, Char mouthed Sandy’s, and I was usually the Twinkie-loving Pink Lady Jan. At least my Pink Lady had a name, right?

Bizza, Char, and I have always had this fantastic creative energy, and a lot of funky things were born out of our friendship. In seventh grade we filmed one episode of a soap opera we created called
Mucho Love
(based on the
telenovellas
our Spanish teacher, Señora Goldberg, showed us in class). The soap was so funny, we actually got it aired on cable access (although I think cable access channels are legally required to air anything anyone sends them). Of course,
Mucho Love
wouldn’t have been nearly as good if Bizza and Char hadn’t convinced all of the hotties on the block to play the studly male leads. But that’s why we work(ed) so well together: I bring the brains, they bring the brawn.

In eighth grade we started a band, The Chakras (Char thought it sounded “mystical”), and we all took up instruments. Bizza was, of course, the lead singer (without a care in the world that her voice sounded like the cries of a llama taking a particularly painful dump) and guitarist (her guitar playing wasn’t much better than her singing). Char was the statuesque (and statuelike, since the only things she moved were her fingers) bass player. (“Chicks are always bass players,” was her reasoning. My response: “Um, aren’t we all chicks?”) And I
was the drummer, pounding away in the background. I didn’t actually mind, since I was playing on Van Davis’s drum kit. (Sigh.) And I’m pretty good. I think it goes along with my crazy math abilities. Sadly, The Chakas broke up after Bizza and Char decided that it was more interesting telling people we were in a band than actually practicing. They
still
tell people we’re in a band. “But we’re on hiatus.” Bizza’s words.

Now that we’re in high school, being friends with Bizza and Char means I get invited to parties by the likes of Gina Betancourt and can experience firsthand what it’s like to watch drunk people puke. It also means that at any of said parties, I practically don’t even have to get dressed or fix my hair (not that it would matter anyway, since there is nothing I can do to perkify its straight brown blahness) because no one notices me anyway in Bizza’s or Char’s presence. Which I consider a good thing, most of the time.

But things are starting to change.

Last year, freshman year, I had the genius plan to start a sewing business. My mom has always made funny clothes for me, mainly for Halloween, but sometimes for other festive occasions (I look back fondly on my Arbor Day beret), and she taught me to sew last summer. My idea was to create simple, A-line skirts using a basic sewing pattern, but making them out of all of the hilarious fabrics they sell at fabric stores. It’s insane what the bizarro fabric creators come up with (whose job is that anyway?): Jelly bean fabric. Prairie dog fabric. Coffee lover’s fabric. They even have fabric for hunters: deer
awaiting tragic death as they hang out in the woods. What kind of hunter would wear that pattern? Maybe hunters’ wives like to make their hunter husbands little hunter pajamas. How quaint.

I thought the skirt thing was an obvious great idea, and Bizza and Char humored me for all of two days. Then they decided it was just “too home ec,” and they’d rather hang out at the local Denny’s. Denny’s is where my brother, Barrett (two years older, completely adorable, the only boy at school with an orange mohawk), and his freakster friends hang out, drink coffee, and smoke (not Barrett, though, who believes, and I quote, “I’d rather my mouth tasted like the zebra-y goodness of Fruit Stripe gum than of someone’s ass”). Barrett took me to Denny’s a few times last year, trying to be all big brotherly, but it wasn’t really my scene. His friends, for the most part, are pretty nice to me. Instead of looking through me (like the people at Gina Betancourt’s party), they usually try to include me in their conversations. But their conversations are about music ninety-nine percent of the time, and I don’t care enough about the Scrapheaps or the Turdmunchers or the Firepoos (I may have some of the names incorrect, due to my entire lack of interest) to converse about them. Ironically, I have filled in for the drummer (the aforementioned and insanely gorgeous Van) of Barrett’s band, the Crudhoppers, during several practices, but I don’t really listen to the music we’re playing. That may sound impossible, but I’m so busy counting and trying to keep up the punk-fast pace that I don’t
really have the option of listening. It’s funny how some of Barrett’s friends think I’m his punky kid sister, when really I’m just some mathlete who’d rather be sewing Thanksgiving skirts in her bedroom while listening to an audiobook.

I glaze over the Crudhoppers’ Denny’s conversations and try to hold in my coughs as Van and Pete Mosely puff smoke rings and stank up my clothes. Bizza and Char, however, think the Denny’s smoking section is the absolute of cool and berate me every time I fail to invite them when Barrett drags me along. (I also fail to mention to them that after Barrett invites me, he says, “Jessie, why don’t you leave the two poseurettes at home tonight.” Part of me feels guilty because I know they want to be there, but part of me thinks I deserve to be the attention girl, even if it is covered in a cloud of smoke.)

The worlds of the poseurettes and the freaksters collided this summer when Bizza decided that a nightly hang at Denny’s was a must. Gaggingly, she even picked up the classy habit of smoking because “it’s the only way we’ll look cool sitting in the smoking section.” Char bought a pack of clove cigarettes, claiming they tasted good, to which I ask why doesn’t she just go suck on a clove so I don’t have to inhale her perfumed secondhand smoke? Not to mention the damage it can do to my skirts. Even though Bizza and Char would rather make holes in their lungs (and mine) than make skirts, I am still way into the sewing. My goal is to sew enough skirts this summer to have a different skirt for every day of the school year. So far I have over seventy skirts (including skirts I started
last summer, but not including the fifteen or so I made and sold at our school’s summer craft fair). Bizza and Char have been too busy trying to infiltrate Barrett’s crew to notice.

Selby Supersnoop by Duncan Ball
The Assassin by Stephen Coonts
The Amber Keeper by Freda Lightfoot
Treecat Wars by David Weber
One Way Forward by Lessig, Lawrence
Silver is for Secrets by Laurie Faria Stolarz
Soul Inheritance by Honey A. Hutson
Plunder and Deceit by Mark R. Levin
Double Crossed by Carter, Ally
Shame the Devil by George P. Pelecanos
Our partner