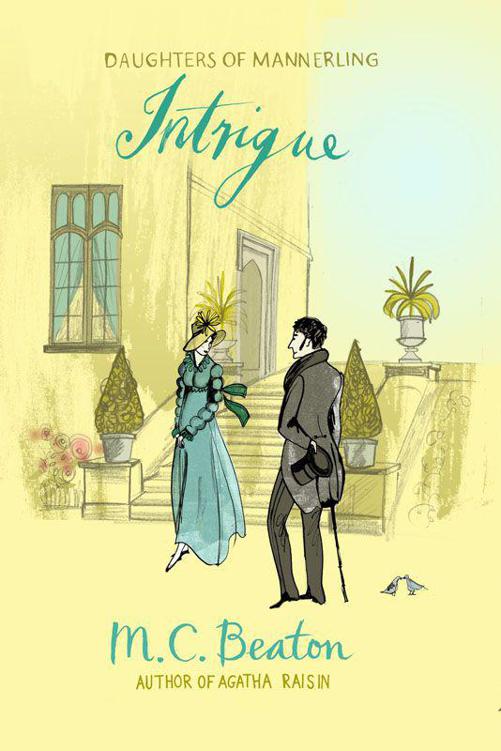 The Daughters of Mannerling Series (in order)

This edition first published in the UK by Canvas,
an imprint of Constable & Robinson Ltd, 2014

The right of M. C. Beaton to be identified as the author of this work has been asserted by her in accordance with the Copyright, Designs and Patents Act 1988.

All rights reserved. This book is sold subject to the condition that it shall not be reproduced in whole or in part, in any form or by any means, electronic or mechanical, including photocopying, recording, or by any information storage and retrieval system now known or hereafter invented, without written permission from the publisher and without a similar condition, including this condition, being imposed on the subsequent purchaser.

This series is dedicated to Rosemary Barradell, with love

Nothing is to me more distasteful than that entire complacency and satisfaction which beam in the countenances of a new-married couple.

Jessica Beverley felt that the mantle of saviour had fallen on her slim shoulders. After the collapse of her family’s fortunes, resulting in the loss of their beloved home, Mannerling, she and her sisters had pinned their hopes on the beauty of the family, the eldest, Isabella. Isabella would marry the new owner of Mannerling, Mr Judd, the Beverleys would move back to their old home, and all of them would live happily ever after.

But Isabella had fallen in love with their neighbour, Lord Fitzpatrick, and had moved to his other estate in Ireland. Mr Judd had fallen prey to gambling debts, but unlike their father, Sir William, he had committed suicide rather than retrench.

Hope had come to Mannerling in the shape of Mr and Mrs Devers, who had a marriageable son. And Jessica Beverley was determined to marry that son.

Now in her nineteenth year, she rivalled Isabella in beauty. She had thick wavy auburn hair and wide-spaced hazel eyes. But her ambitions received a severe setback. No invitation to Mannerling was forthcoming from the new owners. The Beverleys, when
they
had been rich and wealthy and had Mannerling as their home, had been very haughty and proud, and to a great extent still were, despite their reduced circumstances and their modest residence of Brookfield House. It transpired that the Deverses were also haughty and proud. They had heard the local scandal of how Sir William Beverley had tried to get his new son-in-law, Lord Fitzpatrick, to buy back Mannerling for him and how the viscount had refused. So they considered a fellow like Sir William not worthy of their distinguished attention. In the convoluted and Byzantine world of the British aristocracy, it was not necessarily a title that conferred greatness. The Deverses belonged to the untitled aristocracy and could trace their line back to the Normans, something that they frequently did, particularly if the weather was bad and they were confined indoors. Jessica was eager to ingratiate herself with Mr and Mrs Devers before the arrival home of their son Harry from the wars, but although she persuaded her mother, Lady Beverley, to send many invitations and presents of fruit and sweetmeats over to Mannerling, curt and condescending notes of thanks were so far the only results.

‘It really is too bad,’ said Jessica to her sisters. They were gathered in the little parlour of their home, Brookfield House. Sitting beside Jessica on the sofa were the twins, Rachel and Abigail. They were very alike, with fair hair and blue eyes. Lying back in an armchair, watching them, was Belinda, quiet and black-haired. Perched on a footstool in front of the fire was the youngest, Lizzie, with red hair and green eyes, not accounted such a beauty as her elder sisters.

‘Perhaps you will need to wait until Harry Devers is returned from the wars,’ said Belinda, ‘and then perhaps go out riding and accidentally come across him.’

‘I think it is all very silly and humiliating,’ protested Lizzie. ‘Why do we not just forget about the whole sorry business? Mannerling is lost to us.’ The others looked at her uneasily. Lizzie had always been the one who affirmed that their obsession with Mannerling was a waste of time, and yet it was Lizzie who had tried to throw herself in the river when all hope seemed to have gone.

‘It was too bad of Isabella,’ mourned Belinda. ‘But she and Lord Fitzpatrick looked so very happy.’

Jessica sniffed contemptuously. ‘Quite sickening, I thought it, mooning around each other in that common way.’

‘There must be something we can do,’ said Rachel.

But the days passed, one rainy dark day following the other, and no invitation came from Mannerling.

And then, before Christmas, Sir William fell ill with the typhoid. His illness was short and brutal. He died on Christmas Day.

The Beverley sisters, in the past, had ignored the very existence of servants. In fact, Sir William himself had expected all servants to turn their faces to the wall and pretend to be invisible when he appeared on the scene. The Beverleys had very few servants now and no carriage or horses, but the girls instinctively turned to Barry Wort, the odd man. Barry was a stocky ex-soldier, a staunch presence, a comfort in the dark days. Sir William’s former secretary, Mr Ducket, took leave from his present employ to help the widowed Lady Beverley sort out her husband’s affairs.

It transpired that Sir William had actually made a few wise investments before his death on Mr Ducket’s advice, and so Lady Beverley found herself possessed of a reasonable annuity. It would not be enough to let them live in anything approaching luxury, but it meant they could afford a modest carriage and one horse. Perhaps if Lady Beverley had really loved her husband, she might have mourned longer, but for some time she had almost hated him for the loss of Mannerling, hated their reduced circumstances and the very fact that she and the girls had been obliged to have some of their old gowns dyed black instead of buying ‘proper’ mourning. Like her daughters, she was obsessed with Mannerling. She dreamt that, once her daughter had married the heir, she would run the mansion and thus be restored to her former position as mistress of Mannerling.

One day in late spring, she looked out of the window. Barry Wort was digging in the garden, and clustered around him, laughing and joking, were her beautiful daughters. Her face hardened. This was the outside of enough! Her elegant daughters were becoming common and countrified. A governess must be hired as soon as possible to bring them to heel. No wonder they had not been invited to Mannerling, thought Lady Beverley, who always had to have someone else to blame. She sat down at the writing desk and began to pen an advertisement.

After the advertisement appeared, Lady Beverley was kept busy interviewing governesses. But some were too young, some too ‘common,’ some showed the signs of heavy drinking, and so it began to seem to her daughters that she would never be satisfied. Jessica pointed out that they did not need a governess, but her mother replied that they all needed to be re-schooled in graceful manners. Talking to a servant, indeed!

She had almost given up hope when Miss Trumble arrived. Miss Trumble was thin and spare with fine brown eyes, curly brown hair, and a wrinkled face. Her movements were quick and youthful and her voice was light and pleasant. It was hard to realize that she was nearly sixty.

She listened carefully as Lady Beverley droned on about the aristocracy of the family and the loss of Mannerling, but all the while, her intelligent brown eyes roamed about the room, noting the absence of good pictures or ornaments and the shabbiness of the furniture. Then Lady Beverley mentioned the salary in the airy way of a gentlewoman who knows she is offering far too little, and to her amazement and relief Miss Trumble said quietly that she would take the job and start immediately. Trying to mask her relief, for Miss Trumble appeared to be all that was suitable, Lady Beverley asked for references, and Miss Trumble said calmly that she would have to have them sent on. All staff, high and low, carried their references about with them. But the thought of interviewing any more candidates made Lady Beverley decide to take a chance, and so Miss Trumble moved in.

As the Beverley sisters were used to talking freely in front of the servants, no matter what rank, Miss Trumble quickly learned all about Mannerling and about Jessica’s ambition to marry Harry Devers. Privately Miss Trumble was appalled at the haughtiness and pride which the girls gathered about them like protective shawls against the chill of modest circumstances. She found them singularly uneducated and said so, and surprised Lady Beverley by stating she would like to educate them all. So, having exacted a promise that they would learn ‘ladylike skills’ as well, Lady Beverley gave her permission, and the mutinous Beverley sisters found themselves back in the schoolroom, a dingy room at the top of the house that they considered suitable quarters only for servants. They had to learn all those ‘masculine’ sciences such as mathematics, physics, and chemistry. Hitherto their education had been confined to a little French and Italian, sewing, and playing the pianoforte. In vain did Jessica protest to her mother that gentlemen did not like educated ladies. Lady Beverley was too impressed by the breeding and grace of this new governess. Besides, her days were taken up sitting at the window of her drawing room and looking across the fields in the direction of Mannerling, as if waiting for some angel to waft her to her ‘rightful’ home.

Jessica and the others finally settled down under Miss Trumble’s rule, for in their period of mourning there was little else to do, and after a time, much as they grumbled, they began to take their lessons seriously.

Miss Trumble was just beginning to hope, as the warm days of summer arrived, that her charges had begun to forget their ambitions.

‘Sit down!’ Miss Trumble snapped. But a flurry of disappearing muslin skirts as the sisters scampered inelegantly down the stairs was her only answer. She shut the book she had been reading. She gave a little sigh. She had hoped that by strengthening and improving their minds through education she could combat the obsession with Mannerling.