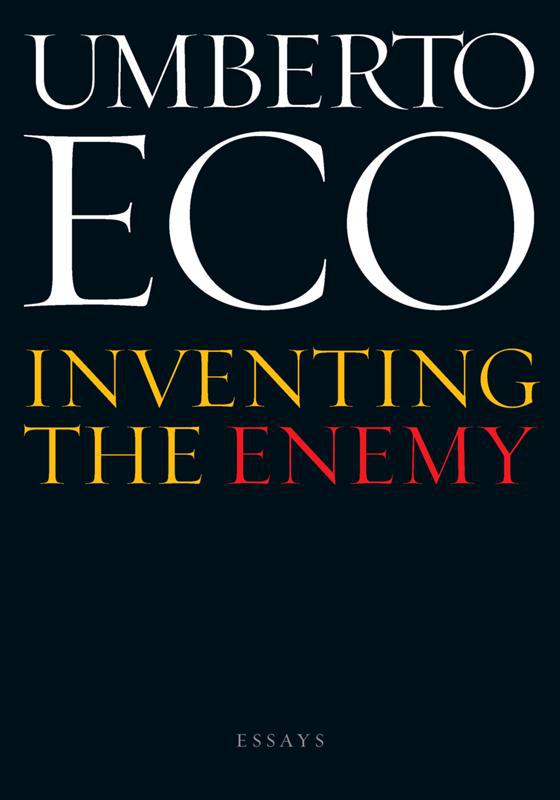 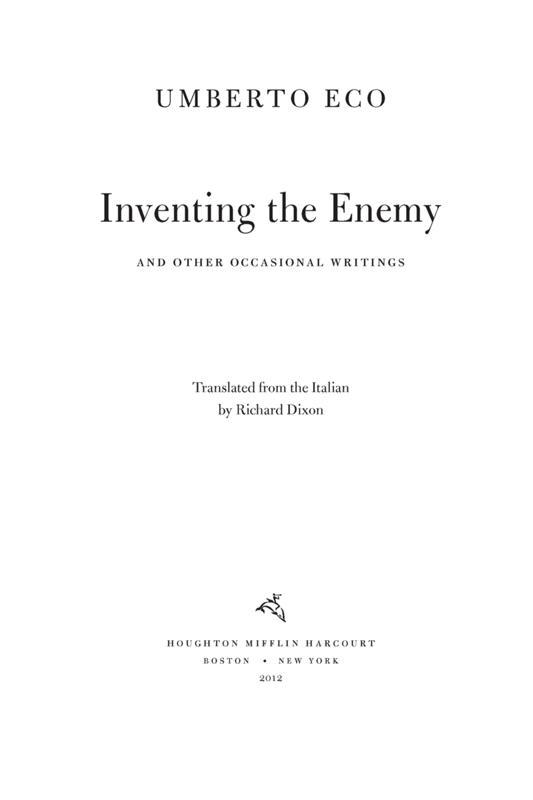 The Beauty of the Flame

No Embryos in Paradise

Hugo, Hélas!: The Poetics of Excess

I Am Edmond Dantès!

Why the Island is Never Found

Excerpts from
Nineteen Eighty-Four
by George Orwell (copyright © George Orwell, 1949) are reprinted by permission of Bill Hamilton as the Literary Executor of the Estate of the Late Sonia Brownell Orwell, and Secker & Warburg Ltd.

T
HE TITLE OF
this collection ought to have been the subtitle,
Occasional Writings
. It was only my publisher’s proper concern—that such a pompously modest title might not attract the reader’s attention, whereas the title of the first essay may arouse curiosity —that determined the final choice.

What are occasional writings and what are their virtues? They are generally on topics about which the author had no specific interest. He was, instead, encouraged to write each one after being invited to contribute to a series of discussions or essays on a particular theme. It captured the author’s interest and encouraged him to reflect on something he might otherwise have ignored—and often a subject imposed from outside turns out to be more fruitful than one arising from some inner whim.

Another virtue of occasional writing is that it does not demand originality at all costs, but aims to entertain the speaker as well as the listener. In short, occasional writing is an exercise in baroque rhetoric, as when Roxane sets challenges for Christian (and through him, for Cyrano), such as “speak to me of love.”

At the end of each essay (all written over the past decade) I note the date and occasion. To emphasize their occasional nature I should mention that “Absolute and Relative” and “The Beauty of the Flame” were presented during the Milanesiana festival of literature, an event centered on a specific theme. It provided an interesting opportunity to talk about the Absolute at a time when the controversy over relativism was blowing up, though the second essay was quite a challenge, as I had never before felt, shall we say, fired by such a topic.

“No Embryos in Paradise” is based on a lecture I gave in 2008 in Bologna at a conference on the ethics of research, which was then included in a book titled
Etica della ricerca medica e identità culturale europea,
edited by Francesco Galofaro (Bologna: CLUEB, 2009).

Thoughts on the poetics of excess in Victor Hugo bring together three different essays and lectures. I brazenly presented my entertainment called “Imaginary Astronomies” in two different versions at two different conferences, one on astronomy and the other on geography.

“Treasure Hunting” gathers various contributions on cathedral treasuries; “Fermented Delights” was presented during a conference on Piero Camporesi. “Censorship and Silence” was delivered almost off the cuff at the conference of the Italian Semiotics Association in 2009.

Three essays appeared in three different issues of the
Almanacco del bibliofilo,
in three different years, and are pieces of real entertainment, inspired by three set themes: “In search of new utopian islands” was the theme for “Living by Proverbs,” “Sentimental digressions on readings from earlier times” for “I Am Edmond Dantès!,” and “Late reviews” for “
Ulysses:
That’s All We Needed . . .”

The penultimate essay, “Why the Island Is Never Found,” appeared in the 2011 issue of the
Almanacco del bibliofilo
and is the text of a lecture given on islands at a conference in Sardinia in 2010.

“Thoughts on WikiLeaks” is the reworking of two articles, one that appeared in
Libération
(December 2, 2010) and the other in
L’Espresso
(December 31, 2010). Finally, returning to the first essay, “Inventing the Enemy” was delivered as one of a series of lectures on the classics organized at the University of Bologna by Ivano Dionigi. These few pages seem rather scant, now that Gian Antonio Stella has so splendidly developed the whole question over more than three hundred pages in his book
Negri, froci, giudei & co.: L’eterna guerra contro l’altro
(Milan: Rizzoli, 2009), but never mind—it would have been a shame to let it sink into oblivion, seeing that making enemies is a continual and relentless occupation.

S
OME YEARS AGO
in New York I found myself in conversation with a taxi driver whose name I had difficulty in placing. He was, he explained, Pakistani and asked where I came from. Italy, I replied. He asked how many of us there were and was surprised we were so few and that our language wasn’t English.

Then he asked me who our enemies were. In response to my “Sorry?” he explained patiently that he wanted to know who were the people against whom we have fought through the centuries over land claims, ethnic rivalry, border incursions, and so forth. I told him we are not at war with anyone. He explained that he wanted to know who were our historical enemies, those who kill us and whom we kill. I repeated that we don’t have any, that we fought our last war more than half a century ago—starting, moreover, with one enemy and ending with another.

He wasn’t satisfied. How can a country have no enemies? Getting out of the taxi, I left a two-dollar tip to compensate him for our indolent Italian pacifism. And only then did it occur to me how I should have answered. It is not true that we Italians have no enemies. We have no outside enemies, or rather we are unable to agree on who they are, because we are continually at war with
each other
—Pisa against Lucca, Guelphs against Ghibellines, north against south, Fascists against Partisans, mafia against state, Berlusconi’s government against the judiciary. It was a pity that during that time the two governments headed by Romano Prodi had not yet fallen; otherwise I could have explained to the taxi driver what it means to lose a war through friendly fire.

Thinking further about the conversation, I have come to the conclusion that one of Italy’s misfortunes over the past sixty years has been the absence of real enemies. The unification of Italy took place thanks to the presence of Austria, or, in the words of Giovanni Berchet, of the
irto, increscioso alemanno—
the bristling, irksome Teuton. And Mussolini was able to enjoy popular support by calling on Italy to avenge herself for a victory in tatters, for humiliating defeats in Abyssinia at Dogali and Adua, and for the Jewish plutodemocracy, which, he claimed, was penalizing us iniquitously. See what happened in the United States when the Evil Empire vanished and the great Soviet enemy faded away. The United States was in danger of losing its identity until bin Laden, in gratitude for the benefits received when he was fighting against the Soviet Union, proffered his merciful hand and gave Bush the opportunity to create new enemies, strengthening feelings of national identity as well as his own power.

Having an enemy is important not only to define our identity but also to provide us with an obstacle against which to measure our system of values and, in seeking to overcome it, to demonstrate our own worth. So when there is no enemy, we have to invent one. Look at the generous flexibility with which the skinheads of Verona would, just to identify themselves as a group, choose anyone not belonging to their group as their enemy. And so we are concerned here not so much with the almost natural phenomenon of identifying an enemy who is threatening us, but with the process of creating and demonizing the enemy.

In the
Orations Against Catiline,
Cicero had no need to convince the Roman senators that they had an enemy since he had proof of Lucius Catiline’s plot. But nonetheless he builds up a picture of the enemy in the second oration, where he describes Catiline’s friends, reflecting on the main accusation: that they were tainted with moral perversity.

Individuals who spend their time feasting, in the arms of loose women, torpid with wine, sated with food, crowned with wreathes, oiled with unguents, weakened by copulation, belch out in words that all good citizens must be killed and the city must be set on fire . . . You have them under your very eyes: not a hair out of place, smooth-faced or with a well-trimmed beard, dressed in tunics down to their ankles and with long sleeves, wrapped in veils and not togas . . . These “youths,” so witty and refined, have learned not only to love and be loved, not only to dance and sing, but also to brandish daggers and administer poisons. (oration 2, sections 1–10)

Cicero’s moralism was much the same as Saint Augustine’s, who condemned pagans because, unlike Christians, they attended circuses, theaters, and amphitheaters, and celebrated orgiastic feasts. Enemies are
different
from us and observe customs that are not our own.

The epitome of difference is the foreigner. In Roman bas-reliefs the barbarians appear as bearded and snub-nosed, and as is well known, the word itself alludes to a defect in language and therefore in thought (
bar-bar,
“they are stuttering”).

From the very beginning, however, the people who become our enemies often are not those who directly threaten us (as would have been the case with the barbarians), but those whom someone has an interest in portraying as a true threat even when they aren’t. Rather than a real threat highlighting the ways in which these enemies are different from us, the difference itself becomes a symbol of what we find threatening.

See what Tacitus has to say about the Jews: “All things that are sacred for us are profane for them, and what is impure for us is lawful for them” (which brings to mind how the English dismiss the French as frog eaters or how the Germans condemn the Italians for excessive use of garlic). The Jews are “strange” because they abstain from eating pork, do not put yeast in bread, rest on the seventh day, marry only among themselves, are circumcised—not (of course) for hygienic or religious reasons but “to show they are different from others”— bury their dead, and do not venerate our caesars. Having demonstrated how certain real customs are different (circumcision, Sabbath rest), the writer can further emphasize his point by adding legendary customs to the picture (they make sacred images of a donkey and despise their parents, children, brothers, their country, and the gods).

9781631054631ChoiceAffairsSalisbury by Jamie Salisbury
Forsaken Dreams by Marylu Tyndall
Remember Me by Serenity Woods
Playing Hard To Get by Grace Octavia
Shorelines by Chris Marais
The Darkness Within by Knight, Charisma
Undetectable (Great Minds Thriller) by Soutter, M. C.
In Too Deep by Samantha Hayes
Shadow Dragon by Horton, Lance
The Whereabouts of Eneas McNulty by Sebastian Barry
Our partner