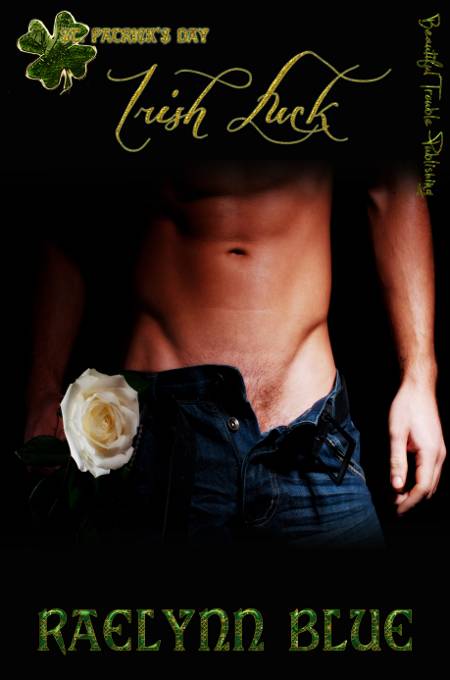 All Rights Reserved.  No part of this book may be reproduced or shared in any form, including but not limited to: printing, photocopying, faxing, recording, electronic transmission, or by any information storage or retrieval system without prior written permission from the authors or holders of the copyright.

This book is a work of fiction.  References may be made to locations and historical events; however, names, characters, places and incidents are the products of the author’s imagination and/or used fictitiously.  Any resemblance to actual persons (living or dead), businesses, events or locales is either used fictitiously or coincidental. All trademarks, service marks, registered trademarks, and registered service marks are the property of their respective owners and are used herein for identification purposes only.

For those who need a little luck.

N
OTE
ABOUT
E
B
OOKS

eBooks are NOT transferable.  Re-selling, sharing or giving away eBooks is a copyright infringement.  No part of this book may be reproduced or transmitted in any form or by any means without written permission of the author or Beautiful Trouble Publishing.

This work of erotica contains adult language and sexually explicit scenes, which are smoking hot.  This book is intended only for adults, as it is defined by the laws of the country in which the purchase is made.  Keep this book out of the hands of under-aged readers.

Shrieks, laughter, and booze-induced bellowing mixed with the occasional belching of the attendants at CAKE’s annual St. Patrick’s Day bash. All the sounds clamored along the rafters of Stephen Silver’s entertainment room. The large living space couldn’t be called anything else, but a ballroom. Kenyatta Kramer understood why her boss, the owner of CAKE, would refer to the room as an entertaining one. Large, flat screen televisions, anchored to the walls, flashed various sports programming intermixed with scenes from Ireland. Seating was arranged in close proximity to the televisions. It also worked for intimate group conversations. Dark green streamers and Irish music piped in through the mansion’s interior sound system. Some people performed Irish jigs and step-danced on the dance floor. The party unfurled in a tide of green dyed beer, leprechaun stick-up posters, and metallic-green shamrock confetti glittering across the entire flooring.

Kenyatta spied Doran Richards from across the room, felt his dark blue eyes on her like a wet blanket—heavy and all encompassing. Something about the way he looked at her made her clit tighten and her nipples pebble. When their eyes connected, her entire body reacted as if he had touched her.
No
, as if he had
caressed
her. That action verb definitely made a closer stab at describing how Doran made her feel. Not that she had a lot of words that could do that. Her skin hummed like electricity had zipped along her person.

Glancing across the mass of people once more, Kenyatta saw him sip his beer as a flock of women approached him. He attracted women like moths to a flame. As proud as peacocks, they flitted around him, batting lashes and flashing artificial cleavage. Kenyatta let out a slow breath and looked away. Not that she could blame them. Doran had dark Irish good looks, dark chocolate hair cut beautifully around his strong face, full lips, strong nose, and brooding dark blue eyes. Tall and lithe, his muscular body spoke to athleticism, not vanity.

She knew he wanted her, too, but she had no idea of his motives. Mr. Silver’s unusual mode of proposing to his employee had somehow green-lighted CAKE’s single employees to follow suit—sort of. The workplace had become a hot bed of hook-ups. Kenyatta had zero interest in being someone’s office fling. Her self worth meant more to her than an hour of self-indulgence. After all, she had to face the man she slept with every day at work. If it went sour or —heaven forbid—sucked, then the situation at work would dissolve into a real problem.

She couldn’t risk it.

Still she couldn’t deny their chemistry ignited a blaze of lust inside her. Just like now.

“You know, he’s been watching you move all night,” Cree said into her ear, making her jump.

“Sweet Jesus!” Kenyatta shouted. Her drink sloshed. “You scared the salvation outta me.”

Cree laughed, and nodded in Doran’s direction. “Oh, sorry about that. Can you please put that fine man out of his misery?”

“He isn’t in any pain to me.” Kenyatta sipped her appletini and feigned indifference.

“That man looks like he’s been longing for someone.” Cree shook her head.

“Yes. Yes he is,” chimed in Chloe Reese. “Damn, he’s sexy—all dark and brooding. His muscles are testing that shirt he’s wearing. Oh and damn those thighs…”

“Not you too,” groaned Kenyatta. Chloe didn’t work at CAKE, but for Carte Seay’s law office. The attorney wore a short green miniskirt and knee-high black stiletto boots. Her blouse matched her boots—inky black silk.

“Hey, when Mr. Seay says go to the party, mingle, and scoop up clients—that’s what I do. And that Irishman right there can get some kisses right—”

Chloe looked at Cree and then Kenyatta. “Oh, well, my bad.”

Chloe frowned and inclined her head toward Doran. “GQ model with an Irish accent. Hell fire. Jump on that, girl.”

Kenyatta’s cheeks burned. “Listen, I work in the same department. It would be—improper.”

“It would be improper not to,” Chloe replied.

Cree looked at Chloe and the two fist-bumped before dissolving into a pool of laughter.

Kenyatta sipped more of her appletini and tried to not feel offended. They didn’t get it. Chloe worked with a bunch of stuffy lawyers and old men. What did she know about Irish temptation? None. Zippo.

“No,” they said in unison, but tried to stifle their laughter.

“I don’t see the humor in this. Just because you’re not tempted every day by someone as handsome as Doran doesn’t mean this is easy. Or that I should be.”

Kenyatta hitched her chin up and crossed her arms. “Not like I am.”

Cree shrugged. “I’m not getting into this one. I have the most beautiful man in all of Greensboro, so…”

“Did someone mention me?” Stephen Silver’s voice ripped through Cree’s rampant giggling. No doubt about it, Stephen Silver was a force. He walked, and people parted.  Power did that. When he reached Cree, he swept her into his arms and hugged her tightly.

“Having a good time, Kenyatta?” he asked.

“Don’t be so formal,” Stephen said, laughing. “We’re going to be family in a few months, so no need for the formality.”

“Okay.” Kenyatta watched him shake his head and laugh.

Cree said, “It will take her a while to get comfortable, Stephen.”

He smiled, but it was all for his fiancée. “Come, there are some businessmen from Ireland I want you to meet.”

Cree nodded, but turned back to Kenyatta and mouthed, “Go. Get. Him.”

Kenyatta shook her head. “No. I’d have to face him in the morning.”

Chloe turned to her with big eyes framed by false lashes and elegant make-up.

“Look, I know work place hook-ups aren’t the best way to find a serious commitment. This is a party—St. Patrick’s Day. So, just go hang out with him tonight. See if they’re any luck of the Irish on tap for you tonight. That man right there, Kenyatta, is a golden opportunity.”

“No buts. Go scoop him up before the other twenty or so unattached women at this party devour him.”

With that said the saucy lawyer, tossed her hair back over her shoulder, and headed for the elegant mahogany bar where a bunch of thirsty partiers already vied for the bartenders’ attention. St. Patrick’s Day had somehow given everyone permission to overindulge.

Kenyatta didn’t want to drink too much. Alcohol never had a real appeal to her.

And he wouldn’t cause a headache in the morning.

Doran sipped his beer, winced at its bitterness, and tried to look relaxed. With the raucous partying going on around him, he could barely hear himself think. Not that he needed to actually hear himself think. His eyes worked fine despite the din. Across the room stood his entire world—Kenyatta Kramer. Seductively dressed in a hunter-green outfit that hugged every curve as tightly as he longed to. Kenyatta’s body trembled with laughter. The familiar sound rang out clear and musical, even though he couldn’t hear it from his current position. Standing beside the punch bowl with Cree Caruthers and another woman he did not know, Kenyatta listened intently, her head tilted to the side. The tips of her bobbed, ebony hair were dyed green for St. Patrick’s Day.

He doubted that she saw him through the throng of CAKE employees and Silver’s business associates. But in case she did, he had put on his best outfit—dark blue jeans, crisp white button-down shirt, and black, Italian leather shoes. Around his neck hung his golden four-leaf clover charm. His mother had given it to him, and he wore it all the time. He smiled at the memory of her handing it to him on his 18
th
birthday. This would give him luck—Irish luck, she’d said. That had been nearly twelve years ago before he’d buried her and his father. The charm had brought him luck—and tonight he planned to use it once more.

“There you are! Been looking all over for you,” shouted Kevin O’Bryan.

It spooked Doran out of his memory. At once the noisy sounds of the party crashed in, fully immersing Doran back into the current time and place. He huffed and looked at his cousin.

Kevin’s shot of red hair seemed bright tonight, because of the bright green KISS ME! I’M IRISH T-shirt, and beads he wore.  He looked the part of an Irishman—green eyes, freckles, and that shock of red hair. His last name was O’Bryan to boot—the same as Doran’s mother’s maiden name. Doran drew from his father’s Irish lineage—dark hair, blue eyes, and darker skin. He and Kevin just didn’t differ in terms of genetics, either. Kevin loved women, but he didn’t really
love
committing to them, so he often didn’t. Doran, on the other hand, searched for a life partner, not just some casual roll in the meadow.

Jealous Lover by Brandi Michaels
Across a War-Tossed Sea by L.M. Elliott
The Mandates by Dave Singleton
Management Skills by January Rowe
That Night by Alice McDermott
Exposed by Francine Pascal
Sara Bennett by Lessons in Seduction
Siren Spirit by Elizabeth M. Hurst
Misunderstood: In Love with the Nerd (The Miss Series Book 2) by Peggy Ann Craig
When She Was Bad... by Louise Bagshawe
Our partner