Read Isabella and the Beast Online

Tags: #A Fairytale Erotica of Beasts and Breeding 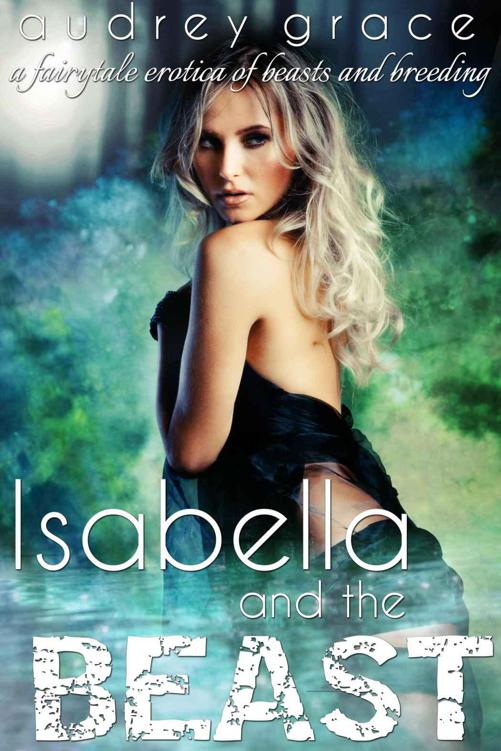 Isabella and the Beast
A Fairytale Erotica of Beasts and Breeding

T
he sun was a large, deep orange ball that hung by the edge of the horizon. It cast its waning rays out across a landscape blanketed by forest and shrubbery.

Isabella stared out at the fading light from the edge of the Dark Forest, that grouping of trees through which not even sunlight could properly penetrate.

She had considered spending the night in town — that would have been infinitely wiser, she knew. But Isabella had always been impulsive, had always followed her heart rather than her head.

And her heart told her that she would make the journey tonight, and end her father’s suffering sooner.

Her horse grunted beside her, his breath steaming out from his nostrils as he nervously pawed the dark, damp soil beneath their feet.

“It’s alright, Franco,” she cooed softly to her beast. She’d been riding him since she was just a wee girl, and the two shared a close bond. “We’ll be there soon. It’s only a forest!”

But Franco did not move, and she slumped on him, hugging his thick neck. She whispered to him, telling him it would be alright. His ears pricked up and listened to her, and she saw in his eyes and through the flaring of his nostrils that he understood her.

The great horse took a few hesitant steps, past the imaginary line that marked the beginning of the Dark Forest, a place that few people dared to ride into. It wasn’t the first time Isabella had strayed past that line. Only a few years ago, when she was still a young girl turning into a young lady, she had ventured in. Franco had been with her, and he had moved slowly, weaving through the trees. She had constantly looked at the thick canopy overhead, and had not heard the screeches of birds and chittering of insects.

Everything was silent in dark forest, as though the myriad animals that dwelt within were themselves too afraid to make a sound.

Isabella had lost her nerve first, and guided Franco, who was all too happy to comply, out of the foreboding forest. Her heart had been racing, her cheeks flushed, and beads of sweat lined her upper lip and forehead. It was the most excitement she’d ever experienced before.

But she was older now and braver still. And instead of fear, her heart now pumped stubbornness through her veins.

“Franco,” she whispered. “We have to go back through here. We cannot go around, that would take too long, and we would be stuck on the road in the middle of the night! That would be even more dangerous than going through Dark Forest at dusk.”

The horse grunted his acknowledgment, and shook his head from left to right.

“I know, Franco, I know. But the town was the only place we could get this medicine. You know that!” The horse whinnied, and Isabella patted his neck. “Shh, shh, that’s enough complaining out of you. Here, I’ll light the lantern.”

The path in front of them was soon bathed in an orange glow that flickered occasionally with the lantern’s small flame. She placed her hand on her small pouch, inside of which was the herbal remedy that would surely rescue her father from the fever that engulfed him.

She wondered, still, if she should have stayed the night in town. She could have set off bright and early the next day. The fever would not have claimed him in the night. The next night, though…

“No,” she whispered to herself, trying to fortify her spirit with familial love and conviction. “I don’t regret my decision!”

But still the fingers of regret were caressing her consciousness. She, like many others, had heard stories of Dark Forest. They were, of course, only stories!

They had to be!

They spoke of a creature with eyes that glowed bright yellow, and a body so fearsome and large it could frighten a horse to death. They said horses had been found dead and rigid, eyes opened wide in horror and nostrils flared. They said the cause of death for those horses was that their hearts had simply stopped. Just like that.

Isabella shook her head lightly, trying not to think on the stories she had heard, but she could not. It was said that the beast that dwelt in Dark Forest, the creature so large and terrifying it stopped hearts dead, fed on the bodies of virgins; women, but never men. They said he was covered with a thick coating of fur, that he was only half a man, and that his other half was pure monster, spat out by hell itself because even the demons and devils of the underworld wanted nothing to do with it.

“Stop it,” she hissed at herself. “It’s not real. They’re only stories.”

But as the shadows grew longer, and as Franco made his way deeper into the Dark Forest, it was easy to think of those tall tales, of those scary stories.

“Why are you afraid, Franco?” she asked as her horse snorted air, exhaled mightily through its nostrils. “You don’t have legends of monsters swirling around inside your mind? What is frightening you?”

Isabella felt tremors of fear pulse through her as it dawned on her that horses were animals that merely reacted. If Franco was afraid, it was not because he was thinking of a monster under the bed. No, it was because he could smell or hear or feel, with that animal instinct long since lost to men and women, something troubling nearby.

“Quicker, Franco!” she whispered, digging her heels slightly into the beast’s sides, and Franco sped up to a canter. The bouncing light from the lantern cast inconsistent cones of orange illumination on the path before them, and every now and then, darkness would completely engulf winding, narrow trail.

Minutes passed, perhaps a dozen, perhaps more. “We should be a quarter of the way through by now, Franco,” Isabella whispered, but she had said it more for her own benefit than his.

Though her horse might read the tones of her voice, he, of course, did not know the words, and Isabella wondered for a moment if Franco was not fooled by her words; if he could indeed sense the trembling fear lurking in the pitch of her voice, in the way in which she delivered her words.

As the lantern bobbed in her hand, Isabella began to look left and right, fearing that if such a monster, such a beast as the legends spoke of, would attack, it would not do so from in front. That would be too obvious, and men with bows and arrows could easily fire true nearly two hundred paces.

No, if the beast were going to attack a man or woman, it would do so from the sides, or from…

Isabella whipped her head around, and as she turned her lantern with her, twisting her torso so that it nearly hurt, she saw two yellow specks fade into the night.

“No!” she shrieked. Goose bumps erupted on her body. A chill ran down her spine. Sweat beaded on her upper lip and forehead, and her heart pumped fear.

But the eyes had disappeared into the darkness, and looking frantically around Isabella was terrified that she could not see them anymore.

Franco responded, and galloped as quickly as he could through the dense trees, before he came to a roaring, whinnying stop, rising up onto his hind legs. Steam poured out of his nose as he exhaled in fear.

Isabella saw, as she fell from her horse’s back, the orange glow of her lantern cast against the canopy of the forest.

And then everything turned to darkness.

It was still dark when Isabella finally opened her eyes. She blinked, straining to glimpse at her surroundings, wondering where she was. It was cold and damp, and the ground beneath her felt similarly wet, if not a little slippery.

As her vision began to fully return to her, she noticed that she was in a room. The walls were too straight, and the ceiling was too high for it to be a cave, or anything like that. And when she looked around, she saw a set of iron bars.

“A prison?” she murmured to herself.

The rattling sound of keys brought her to full alert, and she saw an old woman appear on the other side of the bars, and in her hand was a ring of what must have been two dozen keys. In her other hand was a plate of steaming food. Carrots, potatoes, and meat.

“Where am I?” Isabella asked, her voice trembling.

“I-I’m not hungry,” Isabella stammered, determined not to accept food from a stranger.

“Please, dear, don’t worry. It is not tainted or poisoned.”

“You eat some of it first,” Isabella demanded, raising her voice over the growl of her stomach.

“If you insist,” the old woman responded, shaking her head and tutting. She ate some of the food, and Isabella waited a few moments. When she was satisfied, she nodded.

“Thanks,” she whispered before hurriedly starting to eat.

“There’s a good girl,” the old woman whispered. “Does it feel better to eat?”

“Yes,” Isabella said around a full mouth of food. “I’m so hungry. How long as it been? And where am I?”

“I’m afraid you are in a dungeon, darling.”

“I tried to tell him,” the old woman said morosely, shaking her head and tutting. “But he wouldn’t listen.”

Isabella gasped, and put her hand to her mouth. “You mean that thing, that monster with yellow eyes that attacked me and my horse?”

“Franco!” Isabella gasped. “What’s happened to my horse? Where is it?”

“It is in the stables, and is being looked after, dear. There is no need to worry. It is a fine animal.”

“I assure you the horse is fine, child,” the old woman repeated, shaking her head. “But there is one thing I should mention to you.”

“The Master. He doesn’t like to be called a monster.”

“Uh—” Isabella shook her head and was at a loss for words.

“Ah, a beautiful name befitting of a beautiful young girl like you. Do people call you Bella?”

“They try to, or sometimes Belle, but I tell them I don’t like it.”

“Ah, well the Master is very much the same way. He prefers you don’t call him something he doesn’t like. Monster, for example. Or beast.”

“Says who?” the old woman asked, raising an eyebrow and obviously amused.

“I don’t know. Stories. Everybody knows it!”

“Listen to me, young girl, for I am an old woman with many moons of experience. The Master, he is not a monster. He is not a beast or an animal. The way he looks… he wasn’t always like that. He used to be a man. He was turned into a beast. It was terrifying. I was there. I watched it. I was the boy’s nursemaid, you see. I had to take care of him, seeing the pain and anguish he was in. So I stayed by his side.”

“He attacked me!” Isabella cried.

“Please, you don’t know all the details. Time is running out, you see. He’s getting nervous, getting desperate.”

“Please!” Isabella begged. “You have to tell me why he has captured me!”

“I-I can’t. It’s not my place. I’m sorry, child, but I must leave. I’ve said too much! I’m just an old woman with a big mouth. You finish your food, and simply leave the plate on the floor outside the bars. I’ll be along later to tidy up.”