Read It Had to Be You Online

It Had to Be You 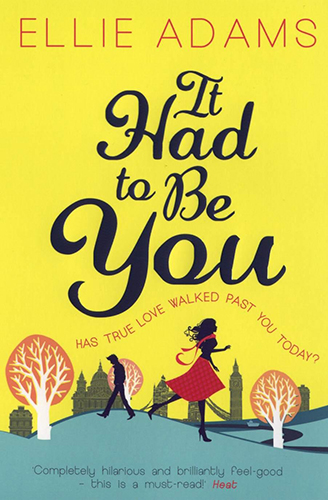 The worst break-up ever . . . Could be the best thing that has ever happened to her

Lizzy Spellman has been dumped. At a party. While wearing a Henry VIII costume. By the man she thought was The One. Someone even filmed it, so now she’s a massive YouTube sensation too.

Just when she thinks things can't get any worse, she meets the rudest, most cynical man in the world, and gets a new mission in life. To prove him wrong.

To Dad,
for sponsoring the arts

On the night of the 30
th
Birthday Party of Doom, Lizzy Spellman learnt three things.

Number one: Camera phones are the worst invention in the history of womankind.

Number two: She was never going to get another boyfriend again. After drinking herself to death on Kumala white wine, her body would lie undiscovered for weeks until the semi-hot postman with the Three Lions tattoo on his calf noticed the bad smell, or someone realized that she hadn’t been on Facebook for a while.

In retrospect the outfit hadn’t been the best idea for a warm June evening, but then Lizzy hadn’t had much choice. The party was being held by an old university friend of Lizzy’s, and the fancy-dress theme was ‘Dead Icons’. She and Justin had been meant to be going as Bonnie and Clyde, but at the last minute her boyfriend had changed his mind and decided he was going as Che Guevara, the Argentine revolutionary.

‘I just think it’s a bit naff when couples dress up as couples,’ he’d told her. ‘You can still go as Bonnie, though, if you like.’

The outfit was a nightmare to take off. Especially when they were on a pleasure boat on the Thames and the toilet was a tiny cubicle with barely room to swing a doublet. By the time Lizzy returned from the loo her friends had disappeared. She took one look across the crowded deck and decided to stay put by the railings. They were bound to turn up soon.

As far as fancy-dress parties went, it was all a bit pretentious. Lizzy had no idea who half the guests were, let alone which dead famous person they were meant to be. She’d already tried to join in a conversation with one group dressed in togas, only to discover they were conversing in fluent Latin.

‘I like your costume,’ she said to a man with a long curly wig, who was having an illicit fag over the side of the boat. ‘I didn’t know Michael Bolton had died, though, that’s really sad.’

He shot her a contemptuous look. ‘Try Galileo, sweedie.’ Flicking the butt overboard, he swanned off.

He’d probably had a horrible time at boarding school, Lizzy told herself. She turned back to take in the view, which always made her heart soar. The riverbank was lit up like a line of Christmas lights, the Houses of Parliament looming impressively in the distance. Another party boat was chugging along towards them from the opposite direction. A Union Jack flag fluttered at its bow and it made Lizzy think of Justin. A flock of butterflies rose up in her stomach again.

Tomorrow was their six-month anniversary, and Justin was taking Lizzy out for a special lunch. ‘It’s a surprise,’ he’d told her, eyes twinkling. ‘I’ve got something to ask you.’

His comment had set the proverbial cat amongst the pigeons. Her best friend Poppet thought Justin was going to ask Lizzy to move in with him. Her other best friend Nic was sure he was going to ask Lizzy to do something weird in bed, or at the very least see where she stood on dogging. Lizzy had also made the mistake of telling her mother, and Mrs Spellman was now convinced Justin was going to propose. ‘You’re both the Right Age, darling,’ she’d said when she’d rung Lizzy for the umpteenth time at work that week to ask what Lizzy was going to wear for the occasion.

‘We’ve only been going out six months, Mum! And I’m only twenty-eight!’

‘Exactly. You don’t want to hang about.’ Her mother’s tone had turned ominous. ‘Justin’s a good catch. If you don’t snap him up someone else will.’

‘What do you suggest I do, take him engagement ring shopping?’

‘I hate it when you get this defeatist attitude. I’m hanging up now.’

Lizzy was a romantic, but there was a difference between this and being a full-blown fantasist. Justin was a sweet and caring man, but he was also logical and organized and always thought everything through. That was why he was managing director of the second-most-successful flagpole company in the south west of England. This was someone who used a spreadsheet to do his weekly food shop; he was hardly going to ask Lizzy to marry him when they weren’t even living together yet. Besides, Lizzy’s dad was terrible at keeping secrets and Mr Spellman hadn’t let slip anything about Justin asking for Lizzy’s hand in marriage. To be honest, Lizzy wasn’t sure about marriage herself just yet. Despite what her mother said, they weren’t living in the fifties and women didn’t spontaneously combust if they weren’t married off by a certain age.

No, it had to be that Justin was going to ask her to move in with him. The signs were definitely there. When they’d first started going out, his fridge had been a fat-free zone, but recently he’d started buying semi-skimmed milk for Lizzy and Lurpak spreadable butter because he knew she liked it on her toast in the mornings. Even more significantly, he’d cleared out his sports-socks drawer for her to ‘leave a few things for when you stay over’. It might not sound like much, but for someone who took his triathlon training as seriously as Justin, this was a pretty big statement.

Lizzy stared across the dark river and couldn’t suppress an indefinable shiver. But what if – just if – he
was
going to propose?

A statuesque Amy Winehouse was tottering across the deck, propping up a swaying Mother Teresa. Arriving in front of Lizzy, Nic adjusted her beehive and swore loudly. ‘This Wonderbra is cutting off my blood supply. I’m going to have to take it off.’

‘You try going to the loo in a codpiece,’ Lizzy sighed. ‘I think I’ve dropped a gold sovereign down the toilet.’

Lizzy gave her a look. ‘You know exactly what I mean! You always call him “Just-in”.’

‘I really don’t know what you’re talking about. I can’t help the way I pronounce his name, can I?’

‘You’re such an old trout,’ Lizzy said, unable to keep the smile off her face. ‘I’ll have you know there’s nothing wrong with my boyfriend’s manhood.’

Poppet produced a bottle of Veuve Clicquot from under her habit. ‘Who wants bubbles?’

‘Where did you get that?’ Lizzy asked.

‘Stole it from the bar.’ She smiled angelically. ‘No one suspects Mother Teresa.’

‘It’s the only way we’re going to get pissed when the house white is thirty quid a bottle.’ Nic caught a nearby William Shakespeare checking out her legs. ‘What are you looking at?’

The champagne was surreptitiously passed round. ‘HMQ?’ Lizzy asked between swigs. ‘HMQ’ was their code for ‘Hot Man Quota’.

‘Three out of ten and that’s being generous,’ Nic said. ‘What is it with posh people and no chins?’

‘I think I saw a hot pope who looks a bit like Matt Damon,’ Poppet said.

‘You think everyone looks like Matt Damon.’ Nic got her phone out. ‘Come on, let’s get a picture.’

‘Don’t tag me in it, I look horrible,’ Poppet fretted. ‘I knew I should have come as Mata Hari!’

‘Poppet,’ Nic said patiently. ‘Have you
seen
Lizzy? Are you and Justin planning to have sex later in that thing?’ she asked Lizzy. ‘Only it’s going to take him all night just to get through the layers.’

‘Someone talking about me?’ Justin materialized from the crowd in front of them with a beer in each hand.

‘We were discussing the logistics of you having sex with old Henry VIII here,’ Nic told him. ‘Have you ever gone to bed with someone in a codpiece?’

‘Ha ha,’ Justin said weakly. He always kept a distance from Nic, as if she was a wild animal that was liable to attack at any moment.

‘We’ll leave you lovebirds to it.’ Nic flashed an evil grin. ‘Come on, Pops, let’s go and find Matt Damon.’ She strutted off, pulling Poppet behind her.

‘No, silly, someone who looks like him.’ Lizzy smiled at her boyfriend. He could be so literal.

They sipped their drinks and made eyes at each other. Lizzy felt a glow of happiness. Justin did look handsome in his Che Guevara beret, especially with the tan he’d got from his golfing weekend in Marbella.

Failing to get his arm round Lizzy, he settled for kissing the tip of her nose instead. ‘I can hardly see you in there under that beard,’ he said fondly. ‘You are funny.’

‘Well, you
are
a bit eccentric, Lizzy. You could have come as someone sexy, but instead you turn up as an obese tyrant. You don’t care what people think.’

‘Oh,’ she said, feeling a bit deflated. ‘Well, I only came as Henry because, you know, you changed your mind at the last moment.’

‘It’s all right,’ he said. ‘I
like
being the one with the crazy girlfriend.’

Justin twanged her beard affectionately. ‘Just not
too
crazy. Try to stay off the white wine tonight.’

He nuzzled her neck. ‘Are you looking forward to lunch tomorrow?’

They might be at a party with everyone who’d ever appeared on the panel for
University Challenge
, but one thing always united people. ‘Karaoke’s about to start,’ Justin said. ‘Do you know what you want to sing?’

Toro! Toro! by Michael Morpurgo
Another Kind of Cowboy by Susan Juby
Seaweed Under Water by Stanley Evans
After You by Jojo Moyes
One Grave Too Many by Beverly Connor
Behind the Shadows by Potter, Patricia;
Reckless Desire by Madeline Baker
The Knife's Edge by Matthew Wolf
The World's Worst Fairy Godmother by Bruce Coville
Tangle Box by Terry Brooks
Our partner