The Thrones of Eden 3 (Eden) 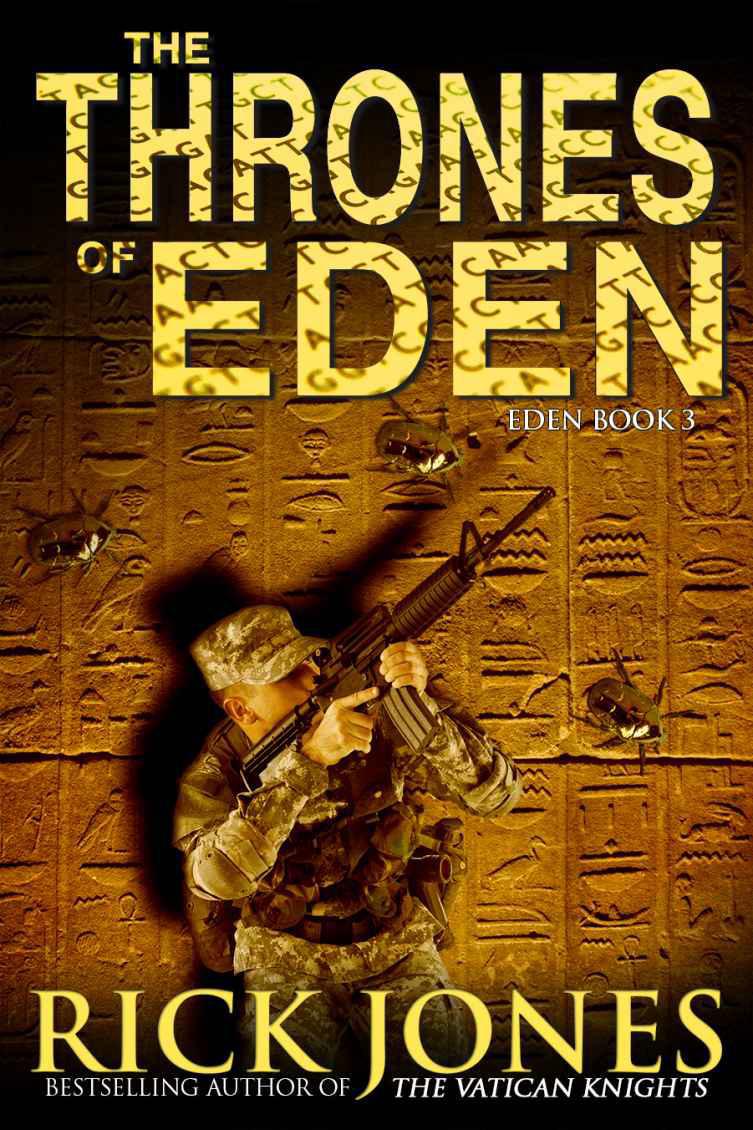 THE THRONES OF EDEN

Book 3 of the Eden Saga

This is a work of fiction. Names, characters, places and incidents are products of the author's imagination or are used fictitiously and should not be construed as real. Any resemblance to actual events, locales, organizations or persons, living or dead, is entirely coincidental.

No part of this book may be used or reproduced in any manner whatsoever without written permission, except in the case of brief quotations embodied in critical articles and reviews. For more information e-mail all inquiries to: [email protected]

Visit Rick Jones on the World Wide Web at:

Visit the Hive Collective on the World Wide Web at:

The Crypts of Eden

The old man squinted beneath the desert sun, his crow’s-feet more pronounced on a face that held the uniform color of tanned leather. Liver scales marked his balding pate like the points of a map, the landmarks created by the constant shower of sunlight. And his eyes, when narrowed against the sun, always showed slivers of blue that were as clear as Caribbean waters.

The midday sun was high, its color white. And the old man found himself constantly wiping his brow with a bandana stained with sweat. In the distance he could see a battery of heat rising from the desert floor, the background shimmering from the heat waves.

Today was going to be another scorcher, he thought. But the old man was acclimated to such environments, having lived most of his life in wastelands.

He stood at the edge of a crater looking down at the levels of the dig site. The earth had been manicured in such a way that the levels resembled steps with ladders allowing access from one tier to the next. Dust motes cloyed the air with a thickness the color of desert sand as laborers hacked away at the landscape with shovels and pickaxes.

He stood sentinel, watching, the man a master of his trade, that of an archeologist, beneath a white-hot sun that had little effect on him. His shirt was wet and clung to him like a second skin, the V-shaped sweat stains on his back and underarms clearly mimicking Rorschach designs.

John Hillary was a Senior Archeologist and Chief Geneticist working mostly with funding mainly from grants proffered by the United States government and scholarly institutes. So much, in fact, that he always seemed to have a never-ending well to tap from, the funds taking him to every corner of the planet on digs that often rewrote—or at least brought valid points of questioning—recorded history.

With studious examination he watched his workers like an eagle perched upon an aerie, trying to decipher if this particular site was worth the effort since it has yet to yield a single piece of trace evidence after two months of digging.

Being a man of conviction he at least wanted to find something, even if it was a simple nugget that would possibly lead to the truth.

On the bottom tier of the dig a shirtless boy, slender and lean with strings of sinewy muscle, stood erect with something in his hand, a stone. And with the heel of his palm he wiped the dust from its face until its natural polish glinted against the sunlight.

The boy placed the stone in a satchel he was wearing around his waist like a fanny pack and began to scale the ladders, going from one level to the next with remarkable agility.

When he was topside he reached into the satchel and pulled out the stone.

But it wasn’t a stone at all.

It was a relic.

The professor accepted the piece and examined it with scientific fascination, flipping the artifact over in his hands searching for a single flaw.

Without looking at the boy, he raised a hand and pointed to the pit
. “İyi bir çocuk. Şimdi geri dönün ve keşif nokta işareti.”
Good boy. Now go back and mark the point of discovery.

The boy did as he was told, descending the ladders to the lower levels as quickly as he scaled them.

Hillary’s mouth lowered in awe. Holding the relic was intoxicating.

It was obviously a fragment of a much larger piece. Its shape was triangular with markings of ancient script, its color and sheen that of black onyx. On the two unbroken sides of the triangle the edging was beveled, a perfect cut of manufacturing. The edge along the broken side was scalpel sharp so when he handled it he did so with caution.

On the scripted side he attempted to analyze the symbols, recognizing little whereas others were alien and familiar to him at the same time. He reached for the small composite book in his shirt pocket, and with his free hand began to flip the pages. He came to a section of designs he gleaned from an article in the newspaper regarding Alyssa Moore’s alleged discovery of Eden, and the unique script and cuneiform writings discovered upon the temple’s walls.

He noted the delicate cursive and the similarities of shapes on his pages mimicked that on the surface of the relic. 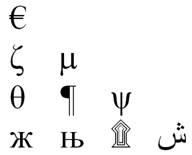 The patterns were unique by design and found nowhere else on Earth other than what Alyssa Moore had claimed. These symbols, these simple markings, along with the given coordinates, clearly corroborated with Moore’s story.

He went to the edge of the crater’s rim and looked into the pit that was filled with clouds and eddies of dust, and the glistening of the laborers sweat upon their backs as they dug relentlessly for something that might not be there.

“But it
is
there,” he whispered to no one in particular. He then turned the relic in his hand.
She was telling the truth
, he considered.
All this time . . .

A LONG DAY’S JOURNEY INTO NIGHT

The Archeological Institute of Ancient Antiquities (The AIAA)

Alyssa Moore was packing boxes with files, records and texts regarding archeological discoveries across the globe. Books written by her father, a once renowned archeologist and founder of the AIAA, the Archeological Institute of Ancient Antiquities, now floundering due to a lack of financial resources, was a legacy that was being boxed and stored away.

The antique desk would be sold or auctioned off, as will everything else in the brownstone office that was blocks away from NYU, once a major source of her father’s funding for archeological digs.

After her alleged discovery of Eden and the inability to prove her claims outside of a few posted articles which ultimately became the fodder for tabloid news, her credibility went from being a legacy to fraud in a matter of months. Government and scholarly institutes treated her like a pariah, refusing to finance future expeditions and digs, the AIAA well drying up to the point where bills could not be paid.

So everything appeared as gray as her mood, even with the floor-to-ceiling drapes parted with the only light coming in was from an overcast sky, causing the shadows in the room to appear deeper and more oppressive.

The bookshelves were empty. And whatever ancient baubles and trinkets she had in display were now packed. And though she had neatly bundled a lifetime of work and discoveries into cardboard boxes, she was hardly set to move.

The life she shared with her father took place behind these walls. The smiles, the laughter, the adrenaline rush always shared when a grant came through to fund another archeological adventure, to make new discoveries and rewrite history. But in the end it always came down to returning to this brownstone that served as a sanctuary where ideas and reminiscing became the bulk of good conversation that was always celebrated with the finest cognac.

She turned to the liquor cabinet, a glass-door facsimile of a French armoire, which was now empty with the exception of the dust that laden its shelves.

A tear slipped from the corner of her almond-shaped eye.
I’m so sorry I failed you
,
Daddy
. With a sweep of her hand she, with a slow drag across her face, she wiped her cheek dry.

“Are you all right?” John Savage entered the room carrying a box, and then placed it on top of another. “Honey?”

She waved a hand of dismissal at him.
Leave me alone.

“Alyssa, are you all right?” He took her gently into his embrace from behind and enfolded his arms around her.

That’s when she broke into a sob. “I failed him,” she said. “I failed my father. I failed the Institute. And I failed us.”

“You failed at nothing,” he told her, resting his chin on her shoulder. “We both know the truth, don’t we? We know Eden existed. We know what we saw in the Yucatán Peninsula to be real. We had no control over the subsequent cover ups. You know that.”

She allowed her arms to fall by her side as she walked to the window. The clouds threatened to open, her eyes watching them as they shifted and morphed into peculiar shapes. Then when she spoke, she did so in a manner that was just above the level of a whisper. “I could have proved the existence of Eden, John. But I chose to bury the evidence in Turkey, instead. Some things are just not meant to be found. And Eden is one of them.”

“You had your reasons, Alyssa. I was there too, remember? You did what you thought was right.”

“And look what ‘right’ got me.” She raised her hand to indicate the boxes piled in the room. “Look around, John. This is what my best has brought us and to the legacy of my father. An eviction notice and a bunch of memories packed away.”