Read It's All Relative Online 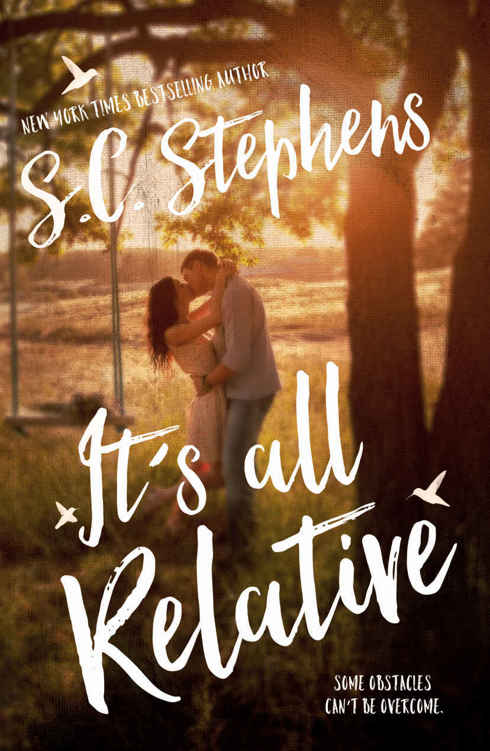 This one is for the Fictionpress fans.

Thank you for your endless support!

T
here was a nip in the air. Of course, for October in Colorado, it wasn’t unusual to feel a nip in the air. Dampness clung to the cold, and the few brave and bundled bodies rushing along the sidewalk stepped into bars and restaurants in some vain attempt to delay their inevitable exposure to the frigid environment. It didn’t rain a lot in Denver, but the weather had been making up for that fact over the past three days. Thick, dark clouds swallowed up what little of the stars would have been seen against the glare of the city. Whenever the moon peeked through the swath of rain-filled blackness across the sky, it was a pale, thin sliver, offering no comfort and little light. The pallid glow of streetlamps and the harsh buzzing of neon business signs—some open, most closed—only made the night feel emptier. Cool wind whipped through the streets, whistling up lonely alleys, and swirling clusters of bright red and orange leaves along the edges of the road.

All in all, it was not a good night to be out and about. And as Jessie soon discovered, when she stepped into a deep, bone-chilling puddle, it was an exceptionally bad night for her to be out. Letting out a surprised squeal, she immediately hopped on one leg and shook out her sodden shoe. Water dripped from the open toe of her high heel, and she let out a long,
Why does the world hate me?
sigh. Her soaked, freezing foot was only the latest example of her string of bad luck.

Jessica Marie, as her family insisted on calling her, was suffering from a severe case of heartbreak. Her boyfriend of the last eighteen months had ended things with her a few weeks ago…after Jessie had launched a heavy glass vase at his head. Jessie wasn’t normally a violent person, but after getting off work early and catching him in a compromising position with his neighbor, she’d had no choice but to use his skull as target practice. She’d wanted to surprise him at his duplex, but the surprise had been all on her. The asshole had even gone so far as to claim he’d only been consoling the woman over the loss of her cat, but friendly, innocent comfort did
not
include naked bodies, a rumpled bed, and the words, “Yes, fuck me harder!”

He’d shattered her heart just as completely as she’d shattered her favorite vase, but as the painful ache of loss had started to fade, red-hot rage had swept into its place. Now she couldn’t stand the thought of that two-timing prick. Jessie missed the obliterated vase more than she missed him. But a hurt was still a hurt, and the betrayal and rejection still stung. Much like her foot.

Trying to resume the blood flow to her chilly extremity, Jessie hopped up and down. “This is a bad idea. Let’s just go home and watch a chick flick.” The two friends beside her could barely contain their laughter at her misfortune, and Jessie gave them each a steely glare.
Keep it up and I’ll make sure I’m not the only one leaving wet footprints on the pavement.

Her friend, Harmony, flashed a bright smile; her blue eyes sparkled with playfulness and humor. “No way, Jess. You need a little fun.” Jessie and Harmony had been friends for as long as Jessie could remember. As a little girl, Jessie had always been envious of her flaming red hair, adorable freckles, and super-long legs. At the time, she’d felt her own curly brown hair was too plain, her short, stubby legs too ordinary. She’d wanted to be unique, like Harm. But then puberty had hit, and Jessie had shot up and filled out, and she’d finally come to accept and love her body; although, she did still wish for Harmony’s fiery hair.

With an annoyed grunt, Jessie grabbed Harmony’s arm and pulled her forward. Hopefully moving her foot would halt the tingling sensation slowly creeping up her leg. As if to mock her, Jessie’s shoe squeaked when she started walking. “I have plenty of fun, Harm. This is cold and wet and…not fun.”

Jessie’s other friend, April, laughed at her comment. April came from a conservative Japanese family, the heritage evident in her beautiful ebony hair and deep olive skin. She didn’t share her family’s penchant for modesty, though, which was clear from her revealing club outfit. April’s mother never would have let her leave the house wearing a backless top and tight leather pants; from the back, she looked topless.

The Asian beauty ran a hand through her perfectly straight hair. “This will be a lot more fun once we get a few shots in you. Promise.” She gave Jessie a charming smile and batted her eyelashes; small raindrops collected on the long, black tips.

Jessie let out a dramatic groan as April grabbed her arm, and, with Harmony’s help, pulled her toward the club up the street—right in the heart of downtown Denver. Jessie couldn’t help but feel for the handful of beggars and homeless people they passed as she was hustled through the cold. She tried to imagine the horrible turn that had taken them down such a dark path, and wondered if any of them would recover from it. Their tragic stories made her wet heel seem like good luck, and, as she approached the door to the club, she hoped the poor souls found some way to stay warm in this mess.

Ignoring the roped line of people waiting to enter the club, April led them straight to the heavy, closed door vibrating from the force of the thunderous music behind it. She curled her fingers in a seductive wave at the muscled man barring the entrance. He smiled as he swept her into a bear hug. April came to this particular club a lot, and had secured herself a permanent spot on the VIP list. The man opened the door to the club, and the force of the sudden, uncontained music made Jessie back up a step.

Adjusting her short, black dress, she followed April and Harmony to the girl collecting money and stamping hands. With an excited squeal, April hugged the blonde. After exchanging a few pleasantries, the woman quickly stamped everyone’s hands, then waved them through to the interior of the club. Jessie was grateful for the heat the instant she stepped inside the club. Seconds after removing their coats, and checking them, some men April knew spotter her, and she was promptly whisked away to the dance floor.

Harmony glanced at April shaking her ass with a group of attractive guys, then turned to Jessie and nodded toward the far end of the packed room, where the bar was situated. The music thumped through Jessie’s chest as she navigated the crowd, making her ears buzz. Bodies jostled against her, warm and sweaty. Jessie didn’t particularly enjoy the sticky contact, but she knew she’d be warm and sweaty soon too.

Harmony led her to a fifteen-foot bar that traveled the length of the back of the room, the dark wood chipped and damaged from years of drunken abuse. Putting her elbows on top of the sticky surface, Harmony expertly emphasized her cleavage in her tight red top. The male bartender instantly noticed, his eyes drifting to her chest and staying there, as he cocked his head to hear her shout her drink order.

Nodding, he got to work pouring them shots of a dark liquid, covered with a light creamy liquor. Jessie smiled as Harmony turned to her. “Bottoms up!” she yelled, handing Jessie one. The two girls clinked their glasses and tilted them back. The sweet yet potent drink burned all the way down Jessie’s throat. Shaking her head and laughing, she stopped feeling bad about her wet foot, her asshole ex-boyfriend, and the state of the downtrodden strangers outside. Resting against the bar with Harmony, Jessie showed off her no-less-impressive amplitude. The bartender grinned at seeing two racks on display for him and poured another round of drinks.