BOOK: Jack Templar and the Lord of the Werewolves (Book #4 of the Templar Chronicles)
>>DOWNLOAD HERE >>READ ONLINE NOW
ads 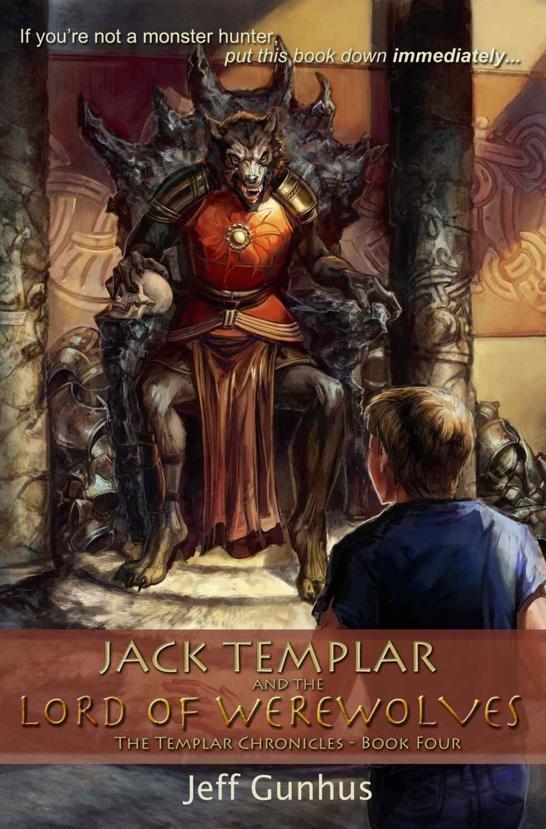 LORD OF THE WEREWOLVES

This book is a work of fiction. Names, characters, businesses, organizations, places, events, and incidents either are the product of the author’s imagination or are used fictitiously. And resemblance to actual persona, living or dead, events, or locales is entirely coincidental.

All rights reserved. Published in the United States by Seven Guns Press. No part of this book may be used or reproduced in any manner whatsoever without written permission except in the case of brief quotations embodied in critical articles and reviews.

Edited by Sher A Hart

Jack Templar and the Lord of the Werewolves: a novel / Jeff Gunhus

Jack Templar and the Lord of the Vampires

Jack Templar and the Lord of the Werewolves

The Little Book Of Secrets

Selected as a 2012 Finalist for the Book of the Year Award. –
Foreword Reviews

“Gunhus brings young readers a monster-filled romp to read at their own risk. The pacing is quick but not rushed, and events seamlessly progress, complete with action, cliffhangers and surprise reveals. ” -
Kirkus Reviews

“The action starts right from the first chapter and doesn’t let up until the book ends. This is the first book in a series, and I look forward to reading the rest of them.”
-The DMS

“Jeff Gunhus has made a terrific fast paced fantasy. I even wanted to bolt my doors and lock my windows! Five stars for the best book of the year.”
-Elizabeth A. Bolt

“Move over Harry Potter and Percy Jackson, there’s a new kid in town - Jack Templar, and he will take you on a wonderful adventure of good vs evil, with friends and enemies at every turn.”
-Penny Brien
“

Praise for Jack Templar and the Monster Hunter Academy

This book is spellbinding…Please hurry and finish the rest of the series. –
Charlotte Edwards

I would highly recommend these books to anyone who loves adventure and fantasy. Riordan fans will definitely love this series! It’s exactly what a middle grade fantasy should be. –
N. Hewitt

Holy cow, this book was amazing, just amazing! I don’t even know what else to say other than to fangirl all over the place…You have to read this book. Just ... read it. –
K. Sozaeva

The characters leap off the page and grab the reader and draw him or her into the always dangerous, sometimes deadly adventures. This is a series that demands to be read. –
Michelle S. Willms

I think anyone who loves an action packed children’s book should read this one. You won’t be disappointed.– Christina Condy

Praise for Jack Templar and the Lord of the Vampires

Mr. Gunhus has once again created a story that his young readers will have trouble putting down until the last word is read and wanting to follow Jack’s next adventure in Book Four. –
Christina Weigand

This is the third book of the series, and I fear I must now declare myself addicted. I rapidly read this book and was depressed when I realized I now have to wait for the next book. -
J. Rivera

The adventures that Jack Templar goes through are awesome. This series is a great read for middle-grade children and young adults. –
Dalene’s Book Review

Continuing with an exciting story. Loved the twists and turns in this book. –
Cheryl Carpinello

Hands down the THE BEST book out there! My boys were begging to stay up later to find out what the next chapter would reveal. –
Heidi Silvestri

For my own little monsters:

And for Nicole: who always smiles when she tells me to go write.

My name is Jack Templar.

Just before my fourteenth birthday, I discovered that I came from a long line of monster hunters. You know, vampires, werewolves, zombies, all kinds of evil creatures called
Creach
.

Not only that, but if monsters around the world could choose one human to kill, it would be me. Why? I used to say I didn’t have a clue, but that’s not true. Not anymore.

As the last Templar Knight, I’m on a quest to reunite the five mystical Jerusalem Stones so that I can defeat Ren Lucre, the Lord of the Creach who holds my father hostage and threatens to launch a war against the human world. I managed to get the first Jerusalem Stone from the Lord of the Vampires after a battle under the streets of Paris. One down, four to go.

Only a few months ago, I was just a kid worrying about school. Now I’m a monster hunter with the fate of the world on my shoulders.

It’s been quite a ride.

If you’re reading this, there’s a good chance you’ve read my first three books. In that case, you’ve already ignored my previous warnings and decided to join the fight against the Creach. Thank you.

But on the off chance you stumbled across this book at your friend’s house or it was given to you by someone who didn’t understand the implications of possessing this book, there are a few things you need to know.

First, monsters are real. Vampires, werewolves, zombies, demons, you name it. In fact, they are more common than you could ever imagine. Second, this book is not make-believe. This is a truthful account of my life as a monster hunter and the dangerous mysteries that often surround me. Third, reading this book makes you fair game for monsters.

That last one is very important. If you read this book, you become both a hunter and the hunted. You’ll need to be ready to face the monsters in your area because they will come looking for you. Take some time before turning the page to make sure you’re up to the challenge. There’s no turning back.

Whether you have been with me from the beginning or are new to the fight, be warned that my adventures are getting more serious. The forces of darkness are gathering and this book doesn’t pull any punches. But I owe it to you to tell you the truth. Even if it’s scary. Even if it’s sad.

So turn the page if you dare. The adventure starts now.

P.S. Go to
www.JackTemplar.com
for hunting advice and to see photos of some of the places I visit in this adventure. Use the password MONSTER to enter the secret Hunters Only area for extra treats. See you there.

The stench hung heavy in the air. There was no other smell in the world quite like it. First came the stink of grease fires from the wall torches, the heavy black smoke that roiled through the air like a foul fog. Then a moldering, musty base layer came to the senses. It reeked of decay and seeping moisture that grew black mold on every surface. The mold clung on the rough-cut rocks lining the dungeon tunnels. It covered the thick iron bars holding the prisoners in place. It even grew on the tattered rags covering the miserable creatures in the cells and likely on their skin as well. That final smell overlay the symphony of stink.

Werewolves, harpies, blind mad-worms, blinderwursts, fangpiercers, even some demons held with the special pure iron chains required to keep them in place. Many of these creatures were pungent under the best circumstances, but locked in the deepest dungeon underground, sometimes for decades, they took on an odor so ripe, so awful, that visitors to the dungeon often had to hold their breath to enter. Even then, the smell would make their eyes sting and well with tears.

Immediately after leaving the dungeon, visitors were allowed a bath or a shower in the castle. As they washed the stench from their bodies, they would feel an overwhelming sense of thanks that they were not a prisoner wallowing in the horrifying conditions they’d just witnessed.

No one, human or Creach, wanted to be a prisoner in the dungeons of Ren Lucre.

Far away, at the end of one of the long, twisting corridors, came the creak of a massive door opening. The prisoners stirred at the sound. Their reactions mirrored how long they had been in their cells.

The newer arrivals looked up with expectation, still hopeful their punishment was going to be short and that someone was coming to tell them their nightmare was over.

Those who had been there longer knew that hope was useless in this dark place. They simply cowered farther into whatever dark corner they could find in their cell, desperate not to be noticed by the Master.

Then there were those who had been there the longest. They simply looked up with mild interest, knowing that nothing they did made any difference. Their spirits were broken. Worse, they knew this to be the dark truth, and they simply didn’t care.

One single prisoner reacted in none of these ways. He simply stood, and the rags that had once been his clothes hung on his bony frame. Unbroken by years of starvation and torture, he still squared his shoulders in the direction of the sound and raised his chin, his eyes glistening in the torchlight with defiance. What he saw would have brought a normal man to his knees, but this man was no more normal than the monster approaching.

Ren Lucre, the five hundred year old vampire, filled the hallway as he strode through it, his cloak billowing behind him as he rushed past the stinking cells. His pale, narrow face looked pinched and concerned. His blood-red lip pursed in a straight line, and his eyes glowered like embers in a fire that might at any time combust into new flame.

He came to the thick set of bars that held the proud man, stopped, and stared him down.

“Well, if it isn’t the Lord of the Creach,” the man said. Even though his voice was course and weak, he still managed an edge of bitter sarcasm. “You look like you’re having a bad day.” The man spat on the floor. “Good.”

Ren Lucre shook his head and looked away, making a decision. “Do you know why I don’t kill you?” he finally asked.

“I figured it was because you enjoyed my company,” the man replied.

An ogre in the cell next to the man howled in amusement. Ren Lucre glared at him, a hand going to the sword at his waist. The ogre licked his lips expectantly as if seeing death as a welcome relief from the dungeon. But Ren Lucre turned away, not giving the creature any release from this world.

The man pointed to the ogre with a thumb. “Ognard here gets me.”

Ren Lucre smiled, but the hatred in the expression was clear. “Good, maybe you and Ognard should share a cell.”