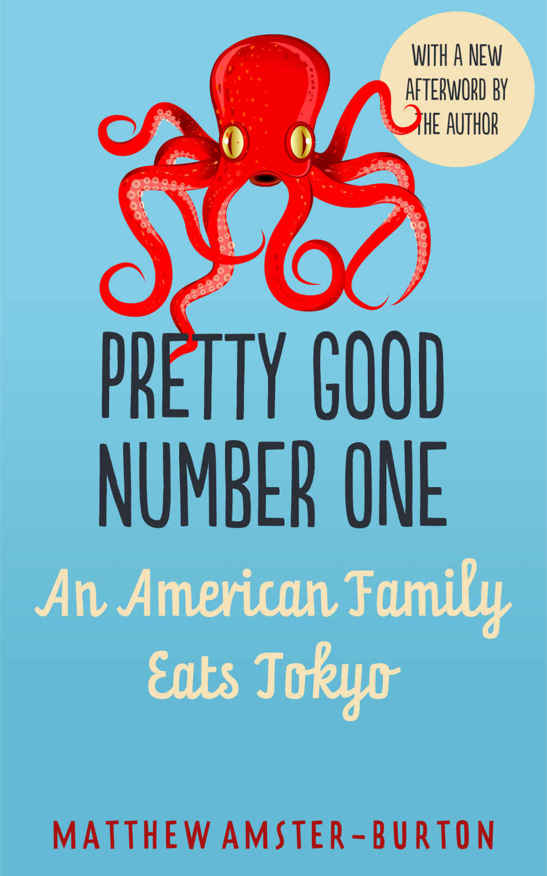 Just an American Girl in the Tokyo Streets

Japanese pronunciation is not terribly difficult for English speakers, but there are a couple of rules to keep in mind. An e at the end of a word is never silent, and is pronounced approximately like “eh” as in “bed.” The restaurant Tamahide is pronounced “ta-ma-hee-deh.” And g’s are always hard as in “goat,” not soft as in “gentle.”

That first fleeting taste of Japan felt like the answer to some unspoken question.

Go out the north exit of Nakano Station and into the Sun Mall shopping arcade. After a few steps, you’ll see Gindaco, the
takoyaki
(octopus balls) chain. Turn right into Pretty Good #1 Alley. Walk past the deli that specializes in
okowa
(steamed sticky rice with tasty bits), a couple of ramen shops, and a fugu restaurant. Go past the pachinko parlor, the grilled eel stand, the camera shops, and the stairs leading to Ginza Renoir coffee shop. If you see the bicycle parking lot in front of Life Supermarket, you’re going the right way.

During this two-block walk through a typical neighborhood, you’ve passed more good food than in most midsized Western cities, even if you don’t love octopus balls as much as I do.

Tokyo is unreal. It’s the amped-up, neon-spewing cybercity of literature and film. It’s an alley teeming with fragrant grilled chicken shops. It’s children playing safely in the street and riding the train across town with no parents in sight. It’s a doughnut chain with higher standards of customer service than most high-end restaurants in America. A colossal megacity devoid of crime, grime, and bad food? Sounds more like a utopian novel than an earthly metropolis.

But Tokyo is real, and it is so unlikely, even up close, that it is
magic.
I hate it when people toss around words like “magic,” but I spent a month in Tokyo in July 2012 in a tiny apartment with my wife, Laurie, and our eight-year-old daughter, Iris, and calling the experience anything other than magical would be dishonest.

Tokyo is not a beautiful place, but it metes out its charms with almost scientific regularity. Every time one of us went for a walk, we came back with exciting news: a peculiar old building, a funny sign, a family of cats, a new kind of yogurt-flavored candy. Yes, Iris went out often for unaccompanied walks; to my knowledge, she was never forced to join the
yakuza
, although she occasionally came back with a suspicious tattoo.

Good food is so easy to find in Tokyo that the city itself seems like a restaurant. In over a month, we had
one meal
that I found disappointing, and it wasn’t actually bad, just bland. We also had meals, many of them at quirky, inexpensive neighborhood restaurants, that were so great that thinking about them buries the needle on my nostalgia meter. Tokyo provokes a sentimental homesickness in me that I’ve never felt about any other place. It’s embarrassing, and I like it.

The Tokyo train map looks like a bowl of DayGlo ramen, but we felt like experts within days. Our apartment was one stop away from Shinjuku Station, the world’s busiest train station. Sounds like hell, doesn’t it? Well, Shinjuku is nice. Sure, it’s teeming with the purposeful strides of people trying to get somewhere else, but finding your train is easy, and getting carried along in the flood of commuters is the urban equivalent of inner tubing on a lazy river.

In short, Tokyo is the opposite of the DMV: it’s the least annoying place I’ve ever been.

Despite these charms, there is a strange lack of swooning travel memoirs about Tokyo. If Westerners think of Tokyo at all, it’s as the capital of a nation struggling to right itself after years of economic stagnation capped by a devastating earthquake and nuclear disaster. Even before the Tōhoku quake, however, Tokyo was a slightly off-the-map tourist destination. How many Tokyo tourist attractions can you name offhand? I’m going to guess zero. If you said Ginza or the Imperial Palace, put down your
Lonely Planet
and quit cheating.

But think about Paris for a moment: its warrens of narrow streets, perfect for strolling and getting happily lost; its modern transportation system; its museums and monuments; its world-class shopping; and above all its food and drink, irresistible from breakfast to dinner, from Michelin-starred palaces to hole-in-the-wall crepe shops.

Tokyo has all of the above, including more Michelin stars than Paris. And there’s no shortage of Tokyo guidebooks and blogs, plus books by Westerners who go to Kyoto (never Tokyo) to find themselves. But the city is missing the English-language books that catapult Paris into the imagination of every romantic. This book is my small attempt to fill that gap.

My friend Becky likes to talk about Vacation Head, a common traveler’s malady that causes a person to fall madly in love with a destination and overlook all its faults. My relationship with Tokyo developed under a scorching case of Vacation Head. There is no dark underbelly to be found here (just lots of pork belly), but I think mine is a perfectly valid perspective. For one thing, nothing is stopping you from having your own torrid and shallow affair with Tokyo. For another, I’ve suffered many attacks of Vacation Head, but this one made every prior case feel like a bad one-night stand. Something is
different
about Tokyo.

Iris was born in 2003, and by the time she was two, it was clear that we had two things in common: a fondness for naps and an appreciation for sushi and other Japanese food, which Laurie did not share. I was a stay-at-home dad with a kid who demanded endless made-up stories, so one day, instead of continuing her favorite epic tale of talking dogs, I told her about a place called Tokyo. I’d never been there and knew little about it other than that it was probably a good place to find some of our favorite foods. Maybe some day we could go there together, just the two of us. In other words, we formed a conspiracy.

We talked about it nearly every day on the way to preschool in the morning. Preschool was ten blocks away, and Iris was so small at first that I pushed her there in the stroller, and we would talk about going to an amusement park and eating conveyor belt sushi and Beard Papa cream puffs. My dad liked to ask Iris, “What are you going to do in Japan?” and then laugh when she said, “Go to an amusement park and eat cream puffs.”

In my book
Hungry Monkey,
which I wrote when Iris was four, I revealed that we were planning the trip:

Iris and I will eat at a skeezy yakitori joint and enjoy char-grilled chicken parts on a stick. We’ll go to an eel restaurant and eat several courses of eel, my favorite fish. Iris’s favorite is mackerel, so we’ll also eat plenty of salt-broiled mackerel,
saba no shioyaki,
tearing off fatty bits with our chopsticks. We will eat our weight in rice...we’ll have breakfast at Tsukiji, the world’s largest fish market. And we’ll eat plenty of sushi from a conveyor belt.

We set aside a hundred bucks each month into a savings account, and eventually the trip started to change from something to talk about on the way to school into something that could actually happen. Then, when Iris was six, we did it, just the two of us: we spent six days in Japan.

We never went to the cream puff place. We didn’t eat any conveyor belt sushi or salt-broiled mackerel. We didn’t go to an eel restaurant or eat breakfast at the fish market. We did go to a skeezy yakitori place, however, which is where Iris discovered
bonjiri,
chicken tail, the fattiest, juiciest bit of the chicken, and the best to grill on a stick and brush with sweetened soy sauce.

In short, we barely did any of the things we originally planned to do, and it was the best vacation ever. Japan is absurdly welcoming and easy to navigate. Having a six-year-old along turned out to be an asset; Iris made a good ambassador, and the trip was delightfully free of the miscommunications that tend to crop up between otherwise amiable adults under the stress of travel.

Something about Tokyo’s exuberant modernism made Iris and me feel like the city existed just to make us happy:
Cheer up!
the waving
maneki-neko
cats seemed to whisper.
You’re in Tokyo!

Iris and I came back with a list of Tokyo attractions we never made it to on our first trip, a list about a month long. And we started to drive Laurie insane by breaking into misty-eyed reminiscences about our cherry blossom days in Japan.

“Fine,” said Laurie. “If Tokyo is so great, let’s all get an apartment there and stay for a month.” Probably she was thinking:

One other guy accompanied us that summer. I apologize, because I kind of wish I could get rid of him, but he’s proved hard to shake, like a case of mono.

His name is Shiro Yamaoka, and he is my literary alter ego. Shiro is a rat of an imaginary friend. He’s a self-centered, lazy, know-it-all with unkempt hair.

Yamaoka is the hero of Oishinbo
,
a long-running
manga
comic series focused on Japanese cuisine. He’s a daily newspaper reporter who’d rather sleep at his desk and daydream about fried gyoza than write articles. When the paper puts him in charge of the Ultimate Menu project, collecting essential dishes from the four corners of Japan, Shiro finds his calling, not to mention some office romance with fellow reporter Yuko Kurita. Kurita is Yamaoka’s intellectual equal, his superior in social skills, and super foxy. I know someone like that.

Now, having said all this, Oishinbo is easy to criticize. The characters are thinner than
washi
paper, and the plots are absurd. Yamaoka is constantly dragging his entire office off to East Bumfuck, Japan, to learn about taro roots or whatever. He works out his daddy issues by challenging his estranged father, Kaibara Yūzan, to a series of Iron Chef–style culinary battles.

But you know what?
I’m also a one-dimensional character.
Probably this is a guy thing, but I’ve never had a complicated inner life. Shiro Yamaoka cares about good food and is intolerant of bad food, but he’s also distrustful of anything with a gourmet pedigree. He is probably a good writer but takes the rest of the week off if he writes two whole articles. One reason he’s drawn to the world of food is because he finds flavor and texture a lot easier to understand than human behavior. If Yamaoka wrote a book, he wouldn’t think twice about spending pages haranguing people to read his favorite comic.

And to drink? Japan makes great beer, coffee, sake, and liquor, but let’s begin the way I start every day, in Tokyo or elsewhere, with a cup of green tea.