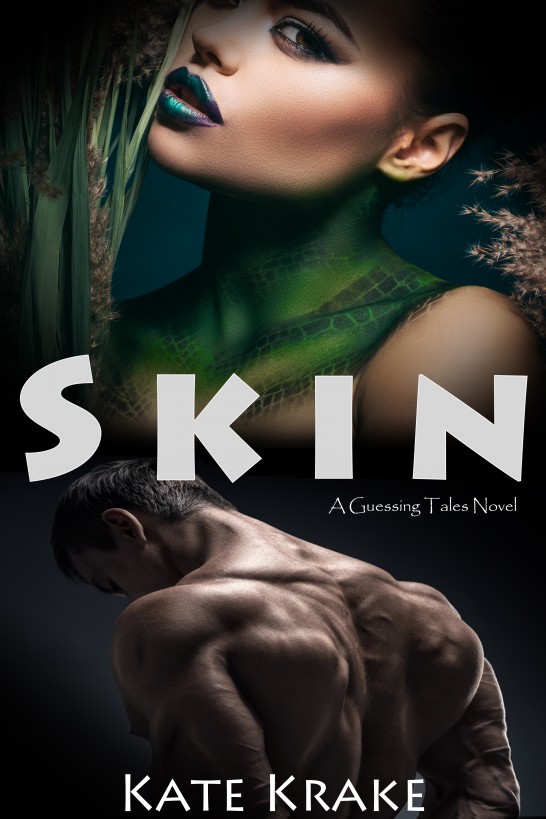 This is a free
ebook.

Please do not
copy or re-distribute this book.

If you wish to
acquire another copy, please support the author by downloading all
copies from the authorised distributor.

Those asshole
Mechs were back again.

It was nearly
midnight. There were six of them, each looked around sixty, maybe
seventy, the bits of them that were still human that is. The steel
parts gleamed. These were new Mechanicals; junked up on attitude,
full of themselves at how strong they were, at what their new
so-called bodies could do. That’s the only reason Mechs needed a
gym—to prove their false strength. Saturn’s was my gym. Why
couldn’t they just piss off and find someplace else to haunt?

Breathless, I
set the bar back in the squat rack, almost falling to my knees. My
legs trembled, firing acid. Clear dots like swirling soap bubbles
swam before me as sweat trickled from my hairline, stinging my
eyes. My face pulsed red and raw.

It was a
carefully measured numbers of specific repetitions and systematic
sets, tinkered with and tailored over years of pounding myself
under the weights, making my real body hard, strong. Every move I
repped out made me different to who I was before, made me better. I
worked out every night at Saturn’s after my shift. It was
excruciating and it almost killed me daily, but I was Rev and this
made me. I wouldn't ever quit it for anything.

I lay back on
the bench, readying for the next exercise. Chest. I focused on the
bar; the spotted rust, the places where decades of grip had worn to
a dull sheen. Ready. Breathe. Lift. It was something to just feel
the weight, the pressure of the steel in my hands, the tightness in
my muscles fighting against gravity. I moved the bar slowly to my
body, controlling the move, controlling the muscle, controlling my
breath. And then up again, trying to block out the Mechs.

They laughed
like boys in a high school locker room, sitting around the squat
rack opposite to where I worked on the bench. One of them looked
and pointed at me. Was that a snigger? Were they laughing at my
breathlessness? My humanness? Screw them.

A dark shape
flickered at the edge of my vision. It happened sometimes when I
worked too hard. I didn't know why, something to do with blood or
oxygen and I hoped nothing to do with my brain misfiring or
anything sinister. The shape moved again and I was relieved to see
it was actually there. A cockroach the size of my thumb, scuttled
across the mould mottled ceiling. It reminded me that I hadn't
filled my omega window that afternoon. I'd have to make sure to
strike as soon as I got home from my session, match it with the
post-workout protein window. The dried grasshoppers I'd picked up
two days ago would probably be enough, though I was usually extra
hungry after a long session like this one was turning out to
be.

The gym roaches
were always plentiful, but that was a line I couldn't cross no
matter how good a source of nutrition they were meant to be.
Grasshoppers and crickets were one thing—you get used to them and
after a while it's no different to eating shellfish. I would rather
starve than eat a roach, or even eat the cheap synthesised shit
they pass off as meat these days. On the wage I got from Saturn’s,
it was either bugs or starve if I wanted to stay clean and fed.

The roach sat
frozen as if it could feel me looking, thinking about food. I could
imagine what that lot would say to a guy like me, chomping on bugs
for the protein and fats needed to build real muscle when all they
needed was an oil can like the brainless Tin Man in that old
movie.

I lifted the
bar from its cradle and pressed another rep. My breath squirted in
a hiss from pursed lips under the strain. Real muscle. Not an atom
of steel anywhere in my body. Nothing artificial. Not even a dental
filling. Real flesh. Real human. Real strength. It made me better
than them.

The one that
had sniggered first cricked his neck and the gym filled with old
time swing music. It was a strange choice to work out to, but it
was better than those nonsense beats the young ones got off on. I
only needed the rhythms of my own heart to push through and pump me
up, but I didn't really mind the antique music. It was one of the
more interesting Mech mods I'd seen. Mechanical implant for pure
entertainment—I could maybe understand that, but obviously not in
my body.

It was the
third night in a row I’d seen this group. In a wave of paranoia I
suspected they were patterning me, ready to strike for whatever
reason they got it into their foil heads they needed to punish me.
It wouldn't be me personally. It was just the same old war.
Naturals versus Mechs. Who had better bodies? Who could bench the
most weight? The most reps? Who would live the longest?

I focused on
the lift, my own breath and the music, Glenn Miller keeping time
with his band, so I didn't notice what happened until I heard the
shouting. One of the Mechs was yelling at the other who had just
finished a set and was still sitting by the rack. Their chests
puffed like silverback gorillas competing for a mate or territory,
which were essentially the same thing.

"You don't know
what you're talking about," the one on the rack said. He shook his
head and stepped back. It only enraged the younger one more.

The first punch
flew. It was quick and sharp, a stab with the fist, right into his
jaw. I couldn't see if either fist or jaw were flesh and knuckle or
steel. That first blow was the starting gun; three against three in
a division I couldn't understand from a group who had, just minutes
before, moved in perfect solidarity. Now they grappled and tore and
kicked and punched. One of them even bit, tearing at the flesh of
another, revealing a bloody gash that said this one at least still
had a human cheek. They grunted and swore, blood flicked and that
grey bio-oil that came out of Mechs when they sweated or bled
seeped from gory wounds. Glenn Miller kept on swinging through the
whole thing.

I was done for
the night just in time. Their fight was contained to their group
but it would only take a single wrong glance for the whole lot to
come down on me. I wasn’t interested in fighting.

I picked up my
glasses, my only concession to the weakness of flesh, from the
floor where I'd set them safely away so as not to accidentally step
on them. As I moved, my shoulder pinged and hot pain crept under my
skin. Damn it. How was it I could rep out a clean set at one twenty
and then blow a joint picking up a few grams of wire and glass?

I tried not to
wince, not wanting to let the Mechs see a hurt Natural, even if
they would notice through their fight, beating themselves senseless
because they could. They'd stop soon and go back to loving one
another. It was how the Mechs worked, their brains fried on
electronics.

My vision
cleared into my glasses and I saw the woman by the door. She looked
Natural, no metal I could see. She was stunning, like a preened
bird. She wore a black jumpsuit kind of thing with long flared legs
and a sleeveless top showing her milky arms, just that bit of
shoulder, not low enough to reveal any sort of cleavage but tight
enough to show it was still there underneath. Her dark hair was
pulled back into a tight bun, not a strand out of place. In years
working Saturn’s, I was pretty sure this was the only time I’d seen
a woman even step through the doors and I knew I’d never seen her
before. I would’ve remembered seeing her anywhere.

She stayed
still, leaning on the wall. The Mechs had stopped fighting but
weren't quite back to the hugging stage. She acknowledged their
presence with a single, perfectly shaped raised eyebrow, then put
her gaze straight on me as I wiped my face on my shirt and
pretended not to see her.

I kept my face
to the floor as I moved close to the door, staring at my trainers
with the toes almost worn through. As if I had no control of my own
movement, I looked up as I moved out of the gym door and our gazes
locked and I stared, straight into her serpent eyes.

Chapter Two
The Prime of Life

My pinged
shoulder was hurting even more the next morning. There was a level
of satisfaction in real pain in real flesh. It was another proof I
was more alive than any Mech. You see it a lot—a bulked out Natural
getting labelled a Mech because of the size of his guns. I was cut,
sculpted, strong, but still on the small side which meant I was
usually safe from anyone accusing me of being anything but human. I
had good body, or at least it used to be.

I stretched
around to look at where my arm ached. There was nothing on the
outside to betray any damage, no redness or swelling so it couldn’t
be that bad and probably wasn’t anything I couldn’t ignore in my
next session. But it still hurt as I pulled on a clean t-shirt.

Dimie, the old
guy that owned Saturn’s and had given me the job when I first set
up in Guessing five years before, said he didn’t care what I wore
to work, but I liked to keep it neat and clean. A plain white
t-shirt, straight black shorts. My clothes were all old, it wasn’t
like I could afford to go out and buy anything new at the first
sign of wear and tear. I made up for the worn out gear with a
perfectly even buzz cut and a clean shave. Dimie wouldn’t have
given a rats if I came in filthy but a man needs a code. It keeps
us on the right path. My mother taught me that from the get go.

I laid out
breakfast—fermented cabbage and eight dried locusts, big ones that
still had a good bit of chew in their middles, just the way I liked
them, and washed them down with a mug of hot water.

Saturn’s was an
easy three block walk through Downtown from my place. I saw the
truck out the front from a block away.

Dimie leaned
against the open door, his arms folded across his chest, watching a
small team of guys move the guts out of my gym.

“
What’s
this?” I asked without saying hello.

“
Out with
the old, Rev,” he said. He kept his eyes on the movers struggling
with a brand-new boxed up treadmill and didn’t look at
me.

Then I saw it.
Once the guys with the last treadmill had moved out of the truck,
two other guys came out carrying the new sign. They set it by the
front of the building.

“
We’ll
put up the new front once all the old stuff is out,” one of the
movers told Dimie.

I stared at the
new sign. Dimie could not have said anything to me, no one could
have, that would have been a deeper insult than that black and
green thing, all stripes and fierce geometry that probably lit up
in the same gaudy brashness that anything that company put out.
Prime Life. Dimie had sold Saturn’s to the devil.