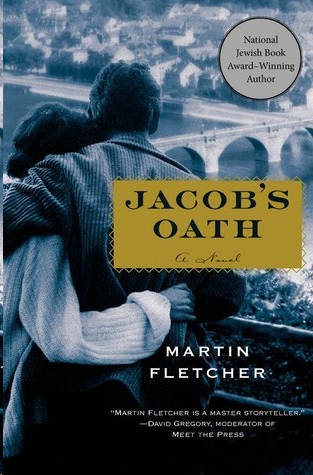 The author and publisher have provided this e-book to you for your personal use only.
You may not make this e-book publicly available in any way.
Copyright infringement is against the law. If you believe the copy of this e-book
you are reading infringes on the author’s copyright, please notify the publisher at:
us.macmillanusa.com/piracy
.

For Hagar of course, forever

Thanks, Cheryl Gould. Chatting over a bottle of wine, you said, “I wonder why some
German Holocaust survivors chose to live in Germany?” And I said, “What a great question.
That’s my next book.” And here it is.

I was cheered along, as always, by my great friend and insightful first reader, Robbie
Anna Hare, whose early comments, along with those of my editor, Marcia Markland; my
agents, Carol Mann and Eliza Dreier; and my wife, Hagar, helped shape the telling
of this story.

I had the great fortune to spend a week browsing through the library of the University
of Heidelberg, and was also greatly helped in my research by the Jüdische Kultusgemeinde
there.

And I’d like to thank Monika Jäger and her father, Hans, for their generous help in
Heidelberg with local logistics, and for sharing their memories.

Also the ever-helpful Gail Shirazi at the Library of Congress in Washington, the German
historian Dr. Thomas Rahe, and Dr. Robert Rozett, head of the library at Yad Vashem
in Jerusalem.

For the history of the secretive Jewish assassins I drew heavily on published accounts,
especially excellent books by Morris Beckman, Rich Cohen, Michael Elkins, Joseph Harmatz,
and, in particular, Howard Blum’s
The Brigade
. Blum quotes one of the Avengers, Israel Carmi, as always killing with these words
on his lips: “In the name of the Jewish people, I sentence you to death.”

Jonathan Freedland of London’s
The Guardian,
who writes thrillers under the name of Sam Bourne, also wrote fascinating reports
on the deeds of the Jewish death squads.

And if you want to know more about the horrors faced by women in Berlin at war’s end,
read
A Woman in Berlin,
a diary by Anonymous.

All this was for the geographical, historical, political, and military context of
my story.

For the tale itself, there were no specific sources. European Jews absorb their heritage
with their mother’s milk, and when it came time to write, the story poured out.

“Everyone goes home. One day. Where else would you go when the war ends? When the
camps shut down. You’ll come home. And I’ll find you.”

In the Human Laundry at Camp 2 they barely knew they were naked, man or woman. Laid
out like corpses on shiny metal tables, washed, shaved, and disinfected by German
nurses, their hips and shoulders jutted out like knives.

Murky water sloshed to the floor and drained away in the central gutter that ran between
the stalls of the stable.

Nurses in white coats and white kerchiefs, shrouded in steam, ethereal, scrubbed in
silence, one hand resting on an arm or a leg or a head. Helpless inmates squirmed
as soap burned their sores and scabs.

Jacob’s sunken eyes were screwed tight. He didn’t want to open them. He didn’t want
to see these Nazis with their pursed lips, their frowns and busy hands. Who are you
to help, now that you lost? It’s a bit late, you bastards.

Gently, the nurse gestured that he turn over. She smiled and cupped his shoulder and
pushed lightly with her hand. He was less bony than her others that morning. He opened
his eyes and winced, scalded in the sudden heat. Through a haze of burning tears he
saw her big chest, big hips, blond hair pulled back into a bun, sweat pouring from
her puckered brow. Flushed cheeks. Her name must be Brunhilde, he thought, and remembered:
Warrior Woman, from the old Norse. How perfect. How ironic. The cow.

His penis flopped as he turned. He lay on it. He hadn’t thought about it in months
and now he did. It pressed against him in the warm dampness. Whoa, he thought. It’s
still there.

And then he stiffened.

He raised his head, his neck muscles flexed. He looked at the back of the naked man
a few tables away who had rolled onto his side, placed one leg on the floor, and stood
up. Jacob had glimpsed the side of his face. He was standing now, the nurse was handing
him a towel. He took it, wiped his face, pulled it across his shoulders, quickly rubbed
his body, and turned again to walk away.

The nurse put her hand on Jacob’s head, saying, “Relax, relax.” She pushed him down
so that she could scrub his neck but he pushed back. “Sorry, did I hurt you?” the
nurse asked. Now his whole back arched and he stretched to see better.

The man looked different. He didn’t fit in. Not as skinny. Not skinny at all. Lean,
yes. Broad. Tall. As he turned and Jacob readied to see his face, a British doctor
stopped to talk to a nurse, blocking Jacob’s view. The man raised his arm to rub his
hair with the towel; his bare arm seemed to emerge from the doctor’s white sleeve.

Jacob strained his eyes, not shut this time, but to peer through the damp mist of
the Laundry. The man’s left armpit was black with wisps and curls, but there it was.
Even at three meters, in this bad light, Jacob saw it.

A blue stain. He couldn’t see what it said but he could see that it was there. A tattoo?
His SS blood group?

Yes. It was him. It must be. Those ears, those stiff round ears sticking out like
a rat. A shiver shook Jacob, his neck hairs stood. He opened his mouth to shout but
nothing came out. His body stiffened and he tried again, but he only shuddered.

Alarmed, the nurse pushed him down, harder this time. “Relax,” she said, “please relax,
there is nothing to worry about, I just need to spray the DDT, you will come out of
here nice and clean. No more itching.”

Now Jacob bellowed, at least he wanted to, but all that came out were high-pitched
gasps, one after another, as if he were panting, choking.

The man was walking toward the door, rubbing his hair. Most inmates had to be carried
on stretchers, others hobbled in pain or took it step by breathless step. He was striding.
It flashed through Jacob’s mind: He could be whistling. The marching song, the Horst
Wessel song: “Die Fahne hoch, die Reihen fest geschlossen…”

“You stop it now,” the nurse said, and she called for help. Two nurses rushed to her
side, the doctor too, they pushed Jacob to the table while the nurse pressed the plunger
and a spray of DDT powder made him cough and his eyes water.

“It’s all right, I don’t mind, after all they’ve been through,” the nurse said in
German, stroking Jacob’s head, trying to calm him. “You’ll feel better very soon.
No typhus.”

“Stop,” Jacob yelled, straining against them. “Hans, you rat!”

At the door the lean man turned. He took in the struggle on the table, the naked stringy
Jew yelling, his little head straining forward like a tortoise, the nurses and doctor
pushing him down. He saw into Jacob’s crazed eyes. Smirked, spat, and left.

Black smoke billowed upward in a cloud that blocked the sun. Flashes of light filtered
through, to be blocked again as another one-second burst of fire whooshed into the
wooden hut. Flames swept through the open door while columns of smoke escaped through
the windows. They curled upward like black puffs from a dragon. The late-spring breeze
stank of burning fuel. The only sound was of crackling wood, until someone shouted
in English, “Good riddance!”

Another burst of flame, the hut exploded into a fireball, and the converted machine
gun on the British tank swung slowly toward Square 9, Block 2.

An unfamiliar curling of the lips began to stretch Jacob’s mouth, he felt his cheek
muscles respond, his eyes seemed to narrow as he waited for his prison to go up in
flames. His face crinkled, just a bit. Jacob thought, So I still know how to smile.
It was hard to grasp: It’s really over.

“So what do you think?” Benno Lazansky said at Jacob’s shoulder, behind the barbed
wire fence that ringed Camp 1 of Bergen-Belsen.

“How long were you there?” Benno asked.

“Yes. Three damn years.” The tight smile vanished. Jacob’s jaw muscles twitched. He’d
made it. Who else had survived? Anyone?

The Churchill Crocodile spat out another four gallons of fuel, propelled by a burst
of liquid nitrogen, and for one second a jet of flame shot from the tank-mounted flamethrower
into the next hut.

“It stank in there,” Jacob said. “You could throw up just from the smell.”

A fifth burst from the flamethrower was sucked into the structure. There was a moment
of calm, as if the hut had swallowed the flame, as if it resisted, followed by a loud
crack, and the hut exploded in a ball of fire and heat that made them flinch from
fifty meters.

“So are you really off, then?” Benno said, blinking away the embers in the air.

“Oh, yes,” Jacob said, turning away. “I just needed to see this. Be sure it’s really
over. Those lice are frying now.”

“What about getting some kind of permit to get through the lines? You don’t have anything.
What will you do, walk? If you wait a few days I can get you something. A piece of
paper. Anything. It’ll help.” Jacob was striding now, Benno at his side.

“How? Anyway, I already told you, I won’t be the only one. Everyone’s walking, there
isn’t any other way, and nobody’s got papers. And I must get home to Heidelberg quickly,
or it’ll be too late.”

“Home?” Benno pulled his elbow, forced him to a halt. “Don’t be stupid. What home?
There’s no one left, you know that. You got lucky in the Star Camp, that’s all.” He
pointed into Jacob’s face, grazed his nose. “We need you. Come with me. In a week
or two we’ll be organized, the boys from the Jewish Brigade are working it out.” Benno
paused as two British soldiers strolled by, heading toward the camp gate. He looked
after them as they passed, and turned back to Jacob.

“I’m in contact with their special units. Secret ones. We’ll get to Palestine, they
want us there. Here, it’s over. Home! You must be joking. You think anyone wants you
in Germany? There’s nothing for us here.”

Jacob pulled his arm away. He looked over his shoulder. The flamethrower had moved
on to the next hut as the others erupted in a ball of fire. When one wall collapsed
inward, sparks jumped. An officer was hosing down the trees nearby to prevent the
fire from spreading. A crowd of British soldiers and nurses were cheering and laughing,
celebrating. And why not? Their war was over. While Allied forces fought through Germany,
mopping up the last Nazi resistance, their only battle now was against typhus and
typhoid.

Through Her Eyes by Amber Morgan
Lesser Beasts: A Snout-to-Tail History of the Humble Pig by Mark Essig
The Night Before by Lisa Jackson
SNAP: New Talent by Drier, Michele
Falling Awake by T.A Richards Neville
Nasty Little F___ers-Kindle by McAfee, David
The Native Star by M. K. Hobson
TRAPPED by Beverly Long - The Men from Crow Hollow 03 - TRAPPED
While You Were Gone: A Thought I Knew You Novella by Moretti, Kate
The Same River Twice by Chris Offutt
Our partner