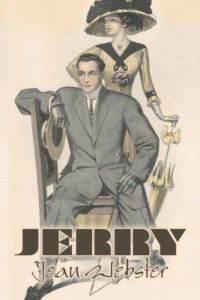 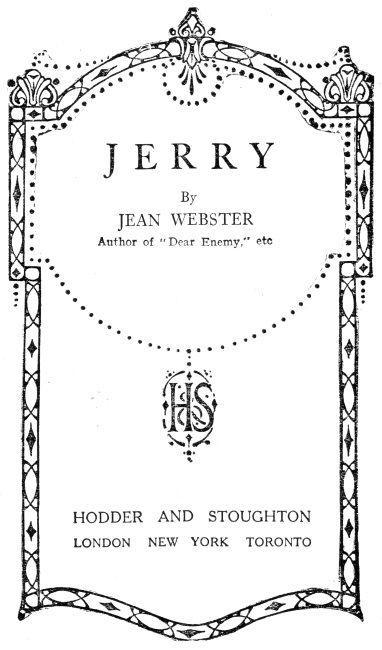 The Project Gutenberg EBook of Jerry, by Jean Webster This eBook is for the use of anyone anywhere at no cost and with almost no restrictions whatsoever. You may copy it, give it away or re-use it under the terms of the Project Gutenberg License included with this eBook or online at www.gutenberg.net

BY THE SAME AUTHOR.
UNIFORM WITH THIS VOLUME Daddy-Long-Legs. Just Patty. Patty and Priscilla. The Four Pools Mystery. The Wheat Princess. Dear Enemy. Much Ado about Peter. LONDON: HODDER & STOUGHTON.

The courtyard of the Hotel du Lac, furnished with half a dozen tables and chairs, a red and green parrot chained to a perch, and a shady little arbour covered with vines, is a pleasant enough place for morning coffee, but decidedly too sunny for afternoon tea. It was close upon four of a July day, when Gustavo, his inseparable napkin floating from his arm, emerged from the cool dark doorway of the house and scanned the burning vista of tables and chairs. He would never, under ordinary circumstances, have interrupted his siesta for the mere delivery of a letter; but this particular letter was addressed to the young American man, and young American men, as every head waiter knows, are an unreasonably impatient lot. The courtyard was empty, as he might have foreseen, and he was turning with a patient sigh towards the long arbour that led to the lake, when the sound of a rustling paper in the summer-house deflected his course. He approached the doorway and looked inside.

The young American man, in white flannels with a red guide-book protruding from his pocket, was comfortably stretched in a lounging chair engaged with a cigarette and a copy of the Paris
Herald
. He glanced up with a yawn--excusable under the circumstances--but as his eye fell upon the letter he sprang to his feet.

'
Ecco
! She is at last arrive, ze lettair for which you haf so moch weesh.' He bowed a second time and presented it. 'Meestair Jayreen Ailyar!'

'I don't wish to hurt your feelings, Gustavo, but I'm not sure I should answer if my eyes were shut.'

He picked up the letter, glanced at the address to make sure--the name was Jerymn Hilliard, Jr.--and ripped it open with an exaggerated sigh of relief. Then he glanced up and caught Gustavo's expression. Gustavo came of a romantic race; there was a gleam of sympathetic interest in his eye.

'Oh, you needn't look so knowing! I suppose you think this is a love-letter? Well it's not. It is, since you appear to be interested, a letter from my sister informing me that they will arrive to-night, and that we will pull out for Riva by the first boat to-morrow morning. Not that I want to leave you, Gustavo, but--Oh thunder!'

He finished the reading in a frowning silence while the waiter stood at polite attention, a shade of anxiety in his eye--there was usually anxiety in his eye when it rested on Jerymn Hilliard, Jr. One could never foresee what the young man would call for next. Yesterday he had rung the bell and demanded a partner to play lawn tennis, as if the hotel kept partners laid away in drawers like so many sheets.

He crumpled up the letter and stuffed it in his pocket.

'I say, Gustavo, what do you think of this? They're going to stay in Lucerne till the tenth--that's next week--and they hope I won't mind waiting; it will be nice for me to have a rest. A
rest
, man, and I've already spent three days in Valedolmo!'

'
Si
, signore, you will desire ze same room?' was as much as Gustavo thought.

He sank back into his chair and plunged his hands into his pockets with an air of sombre resignation. The waiter hovered over him, divided between a desire to return to his siesta, and a sympathetic interest in the young man's troubles. Never before in the history of his connexion with the Hotel du Lac had Gustavo experienced such a munificent, companionable, expansive, entertaining, thoroughly unique and inexplicable guest. Even the fact that he was American scarcely accounted for everything.

The young man raised his head and eyed his companion gloomily.

'Gustavo, have you a sister?'

'A sister?' Gustavo's manner was uncomprehending but patient. '
Si
, signore, I have eight sister.'

'Eight! Merciful saints. How do you manage to be so cheerful?'

'Tree is married, signore, one uvver is betrofed, one is in a convent, one is dead, and two is babies.'

'I see--they're pretty well disposed of; but the babies will grow up, Gustavo, and as for that betrothed one, I should still be a little nervous if I were you; you can never be sure they are going to stay betrothed. I hope she doesn't spend her time chasing over the map of Europe making appointments with you to meet her in unheard of little mountain villages where the only approach to Christian reading matter is a Paris
Herald
four days old, and then doesn't turn up to keep her appointments?'

Gustavo blinked. His supple back achieved another bow.

'Sank you,' he murmured.

'And you don't happen to have an aunt?'

'An aunt, signore?' There was vagueness in his tone.

'Yes, Gustavo, an aunt. A female relative who reads you like an open book, who sees your faults and skips your virtues, who remembers how dear and good and obliging your father was at your age, who hoped great things of you when you were a baby, who had intended to make you her heir but has about decided to endow an orphan asylum--have you, Gustavo, by chance an aunt?'

'I do not think you grasp my question. An
aunt
--the sister of your father, or perhaps your mother.'

A gleam of illumination swept over Gustavo's troubled features.

'Eleven aunts! Before such a tragedy I am speechless; you need say no more, Gustavo, from this moment we are friends.'

He held out his hand. Gustavo regarded it dazedly; then, since it seemed to be expected, he gingerly presented his own. The result was a shining newly-minted two-lire piece. He pocketed it with a fresh succession of bows.

'Have I need of anysing?' There was reproach, indignation, disgust in the young man's tone. 'How can you ask such a question, Gustavo? Here am I, three days in Valedolmo, with seven more stretching before me. I have plenty of towels and soap and soft-boiled eggs, if that is what you mean; but a man's spirit cannot be nourished on soap and soft-boiled eggs. What I need is food for the mind--diversion, distraction, amusement--no, Gustavo, you needn't offer me the Paris
Herald
again. I already know by heart the list of guests in every hotel in Switzerland.'

'Ah, it is diversion zat you wish? Have you seen zat ver' beautiful Luini in ze chapel of San Bartolomeo? It is four hundred years old.'

'Yes, Gustavo, I have seen the Luini in the chapel of San Bartolomeo. I derived all the pleasure to be got out of it the first afternoon I came.'

'Yes, Gustavo, the signore has seen the cedar of Lebanon in the garden of the prince, also the ilex tree two hundred years old and the india-rubber plant from South America. They are extremely beautiful, but they don't last a week.'

'Have you swimmed in ze lake?'

'It is lukewarm, Gustavo.'

The waiter's eyes roved anxiously. They lighted on the lunette of shimmering water and purple mountains visible at the farther end of the arbour.

Mr. Jerymn Hilliard, Jr., stopped him with a gesture.

'That will do; I read Baedeker myself, and I saw them all the first night I came. You must know at your age, Gustavo, that a man can't enjoy a view by himself; it takes two for that sort of thing.--Yes, the truth is that I am lonely. You can see yourself to what straits I am pushed for conversation. If I had your command of language, now, I would talk to the German Alpine climbers.'

An idea flashed over Gustavo's features.

'Ah, zat is it! Why does not ze signore climb mountains? Ver' helful; ver' diverting. I find guide.'

'You needn't bother. Your guide would be Italian, and it's too much of a strain to talk to a man all day in dumb show.' He folded his arms with a weary sigh. 'A week of Valedolmo! An eternity!'

Gustavo echoed the sigh. Though he did not entirely comprehend the trouble, still he was of a generously sympathetic nature.

'It is a pity,' he observed casually, 'zat you are not acquaint wif ze Signor Americano who lives in Villa Rosa. He also finds Valedolmo undiverting. He comes--but often--to talk wif me. He has fear of forgetting how to spik Angleesh, he says.'

The young man opened his eyes.

'What are you talking about--a Signor Americano here in Valedolmo?'

Jerymn Hilliard, Jr., unfolded his arms and sat up alertly.

'You mean to tell me that you had an American family up your sleeve all this time and never said a word about it?' His tone was stern.

'
Scusi
, signore, I have not known zat you have ze plaisir of zer acquaintance.'

'The pleasure of their acquaintance! Good heavens, Gustavo, when one shipwrecked man meets another shipwrecked man on a desert island must they be introduced before they can speak?'

'And why, may I ask, should an intelligent American family be living in Valedolmo?'

'I do not know, signore. I have heard ze Signor Papa's healf was no good, and ze doctors in Americk' zay say to heem, "You need change, to breave ze beautiful climate of Italia." And he say, "All right, I go to Valedolmo." It is small, signore, but ver'
famosa
. Oh, yes,
molto famosa
. In ze autumn and ze spring foreigners come from all ze world--Angleesh, French, German--
tutti
! Ze Hotel du Lac is full. Every day we turn peoples away.'

'So! I seem to have struck the wrong season.--But about this American family, what's their name?'

'Veeldair.' He shook his head. 'That's not American, Gustavo, at least when you say it. But never mind, if they come from New York it's all right. How many are there--just two?'

'But no! Ze papa and ze signorina and ze--ze--' he rolled his eyes in search of the word--'ze aunt!'

'Another aunt! The sky appears to be raining aunts to-day. What does she do for amusement--the signorina who is beautiful as the angels?'

A Brief Moment in TIme by Watier, Jeane
Hooking Up : Sex, Dating, and Relationships on Campus by Kathleen A. Bogle
Labyrinth by Tarah Scott
Bronwyn Scott by A Lady Risks All
The King's Daughters by Nathalie Mallet
Murder in the Forum by Rosemary Rowe
On The Black Hill (Vintage Classics) by Chatwin, Bruce
Long Voyage Back by Luke Rhinehart
Deep Purple by Parris Afton Bonds
Twisted Asphalt (Asphalt Outlaw Series Book 1) by Blue Remy
Our partner