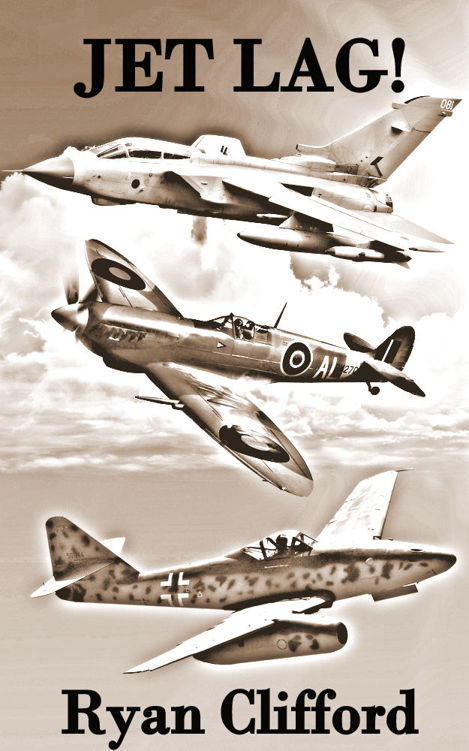 KEVIN C EATON has asserted his moral right and his right under sections 77 and 78 of the Copyright, Designs and Patents Act, 1988, to be identified as the author of this work.

All of the locations and characters in this book are fictitious, and any resemblance to persons, living or dead, is purely coincidental.

a new novel to stretch the imagination……

Many of the historical episodes in this story did transpire and some of the characters did exist…..but some didn’t……

‘Never in the field of human conflict,

has so much been owed

Elizabeth Reynolds, the Honorary Secretary of the Taunton branch of the Spitfire Preservation Society, sat quietly in her well-used caravan in the tiny village of Litcham, near Dereham in Norfolk. She was making notes describing the progress that her small team had made during their annual summer dig.

Her father had been a Spitfire pilot on number Treble One (111) Squadron during the Second World War, and had been shot down twice in action over the English Channel. As a consequence, Elizabeth and her husband were enthusiastic amateur archaeologists, and spent every spare minute searching for and researching potential Spitfire and Hurricane crash sites. This one in Norfolk was recorded in documents held at RAF Marham and in the Imperial War Museum archives. It had been reported as the crash site of an aircraft in the late summer of 1940, and Elizabeth had set up a team of eight fellow devotees to visit for six weeks during the school holidays. She and her husband were both experienced teachers at their local primary school.

The main issue with this site was that it lay in the middle of a boggy marsh making excavation painfully slow and very, very wet. However, some progress had been made and their brand new metal detector was picking up something not too far from the surface; so she suspected that they were close. They needed to be, as they were due to return to Somerset the following Saturday, in time for the new term.

It was lunchtime and the dig was due to recommence shortly, so she finished her diary entry and exited the caravan to join her team-mates at the picnic table they used for sharing meals.

‘Do you think we’ll find anything before we have to leave, Jake?’ she asked her husband, who had been supervising the dig.

‘I'm not certain, Liz, but I reckon that we are pretty damned close. The detector went beserk this morning, so there is definitely something just below where we are digging. It's most probably an aircraft engine.’

‘Brilliant,’ replied Elizabeth, ‘let's get going – there's no point in just sitting here talking about it.’

The eight friends all sprang up and strolled back to the swampy area across the field from where the four caravans were parked up. The local landowner had been very helpful, and allowed them to stay at no cost whilst they investigated the site. He had actually flown Blenheim bombers during the war – so was extremely interested and excited by the prospect of finding a WWII fighter in his field.

The digging continued for about another hour. They had shored up a sort of protected inner area, so that slime and mud didn’t keep filling up the foul smelling mire that they had already cleared away.

And at about 3pm they struck gold!

‘Liz, everybody – I've found something! It's metal for sure. Come and help,’ pled Jake – looking for support.

Three of the team climbed down into the pit using the ladders propped up along three sides of the hole. They carefully cleared as much mud as they could by filling buckets and passing them up to their colleagues standing on the rim. After about fifteen minutes a shape was beginning to form and rise from the quagmire. It certainly wasn’t an engine and certainly not wooden – as a Spit or Hurricane might have been.

As more of the metal sheet came into view, Jake began to detect writing  - in large red lettering. He requested a wet sponge to clear the mud away and eventually revealed a puzzling and faded decal:

He was baffled. The tenth anniversary of what? He needed to see more, so he kept digging, after taking several photos, and continued his running commentary for the others in the team.

After twenty further minutes of scraping and cleaning he revealed characters which totally mystified and shocked him.

‘Liz, come down and look at this. I can't make head nor tail of it.’

Elizabeth shinned down the ladder whilst the other three vacated the hole to give them more space.

‘What have you got then?’ she asked.

‘’Well, just have a look for yourself. I’ve never seen anything like this in my life. If this is an aircraft – which no doubt it is if you believe the writing – then it's like no aircraft that has ever been built or exists today!’

Elizabeth stepped forward so that she could read the words which Jake had exposed:

She could not believe her eyes.

She was utterly bemused and not a little bit spooked.

What the hell had they found?

‘Gentlemen, I have called you here today, prior to full cabinet, to discover your views on the specific and
immediate
threat that the Nazi Luftwaffe might pose to the security of this country.’

The Prime Minister pronounced Nazi –‘Narsee’ as he was habitually inclined to do.

The four other men present sat silently for a few seconds before the new Prime Minister of five days, Winston Spencer Churchill, continued in his deep-throated, stuttering style.

‘I am convinced that the immediate threat of invasion by sea, at the present time, is negligible and that the Nazis will now try to bombard us into submission. I am certain that air superiority over Britain is their primary aim and I believe that we should prepare, as best we are able, for this particular and most potent danger.’

‘Prime Minister, I could not agree more, but I am extremely concerned about the number of fighter aircraft being sent to France.  I cannot afford to lose any more Hurricanes on what I consider to be a lost cause. I need every fighter I can get, and sending them to France will cause a severe shortfall in our ability to defend ourselves in the face of a determined Luftwaffe attack. My promised fifty-two squadrons have already been reduced to thirty-six, and at the present loss-rate in France, within two weeks I will have no Force to command.  And of course, for every fighter we lose in France we often lose something even more valuable and almost irreplaceable - the pilot.’

‘Air Chief Marshal, I have given my word to Reynaud, the French Premier. I have promised him all the fighters he needs to defend himself against the Nazis. Do you now expect me to go back on my word? Beaverbrook here is building new aircraft at a prodigious rate and two hundred pilots a month are coming out of training. What
more
do you want?’

Dowding could see that he was fighting a losing battle. His fighter force was well below the minimum he needed to successfully repel an attack from the Luftwaffe stationed in France. However, Churchill was clearly determined to yield to pathetic and utterly selfish French government demands for yet more aircraft.

The Air Officer Commanding Fighter Command glanced at the Chief of the Air Staff, who nodded his assent almost imperceptibly. Dowding looked back at Churchill and played his last card.

‘Prime Minister, I have only approximately five hundred fighters with which to defend the South of England against air attacks from France. We are heavily outnumbered by the Luftwaffe, who are far better trained and equipped. If they attack within the next three months we cannot possibly hope to win if any more of our aircraft are sent to France on lost causes. I implore you, Prime Minister, do not deplete our precious stock of fighters.’

Churchill sat back, brought a cigar to his lips and drew on it deeply. He wasn’t sure whether he liked this man Dowding, and he was damned sure that he was not going to be dictated to in this fashion. He looked around the room at the faces of the men who would now be expecting him to stamp his authority.

‘Gentlemen, tomorrow I will cross the Channel for further discussions with the French leadership. If I deem it necessary, then more fighters will be sent to France, as and when required. Am I fully understood, Air Chief Marshal?’ - now peering directly at Dowding.

‘Oh yes sir, I understand.  I understand that this country expects to be attacked by a massive force of German aircraft sometime in the very near future and
you
are proposing to take away the only line of defence we have. I tell you now Prime Minister, if you persist with your plan to waste our assets on France, this country’s skies will be dominated by the German Luftwaffe by the Autumn.  And that is not a threat, Prime Minister, it is a fact!’

Churchill appeared unmoved, but seethed with anger, and it was possible to detect that rage in his immediate response to this persistent attack from C-in-C Fighter Command.

‘Well, Air Chief Marshal, you will just have to do the best you can - or pray for a miracle.’

The next day Churchill indeed travelled to France and within forty-eight hours had given away another ten Fighter Squadrons.

Dowding would now need that miracle if Britain was to survive.

‘Then when can we expect some progress, Herr Professor. The Fuhrer is demanding an answer. A tremendous amount depends on the success of the project.’

‘I fully realise that, Herr Feldmarschall.’

‘You must realise, Herr Professor , that we cannot wait forever. Plans have to be made and the Fuhrer is becoming even more impatient.’

‘Then when can we expect some results, Herr Professor?’

Hermann Goering’s well-publicised charm was now showing signs of strain down the telephone line.  Adolf Hitler had just spent the last forty-five minutes emphasising the importance of the Kretinga Project. Ample money and time had been poured into the development of this vital aspect of his plans for Europe, and Hitler was now becoming uneasy and beginning to question Goering’s word. He had promised that the prototypes and pre-production models would be ready by the end of 1939, and this now seemed very uncertain indeed. This delay was bringing pressure to bear on the Luftwaffe supremo, and he was damned sure that the scientists in Lithuania would suffer equal pressure in return.

‘I’ve told you before, Herr Feldmarschall, we will be finished as soon as possible. We cannot afford to be over-ambitious at this stage. The project is reaching a critical stage. One mistake - one act of impetuosity - and it will put us back two or three years. The British are close behind us - and it is only their own government’s lack of vision that has prevented their success so far.’