Jungle Of Steel And Stone 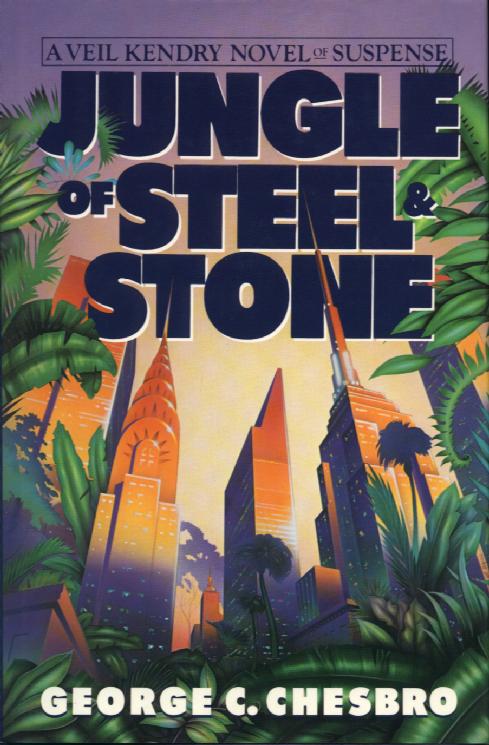 for Mark and Michaele

Vivid dreaming is his gift and affliction, the lash of memory and a guide to justice, a mystery and sometimes the key to mystery, prod to violence and maker of peace, an invitation to madness and the fountainhead of his power as an artist.

Now vivid dreaming is also his passport to the land where his love is lost.

"Come to me," Sharon whispers. "Love me, Veil. Tango with me on the edge of time."

"Yes," he replies, and begins his dream journey through no time and across no space to the place beyond the Lazarus Gate, a perilous state of consciousness a sigh from death that only Veil can reach and return from safely. Sharon had gone beyond the Lazarus Gate to be with him at his time of greatest danger, and now she is trapped there.

As he approaches death he becomes pure blue flight, an electric pulse with no differentiation between body and mind. There are no fixed reference points, no sound, only the conviction that he is traveling at great speed. Then light arcs through him, flashing like lightning down his spine. He explodes and is reassembled, floating weightless, before the shimmering white radiance of the Lazarus Gate. As he unhesitatingly passes through there is another flash of blinding light and a great, booming chime sound that he feels in his head, heart, stomach, and groin.

Sharon Solow, naked like Veil, waits for him in an infinitely long corridor bounded on both sides by walls of swirling gray where ominous, toothed shapes lurk, melting away and re-forming, sighing, beckoning. Although there is no wind here, Sharon's waist-length, wheat-colored hair billows behind her as she comes toward him, and her glacial-blue, silver-streaked eyes gleam with love and desire. Her laughter, like their voices, is a chime scale that bounces off the deadly surface of the surrounding walls and falls around them in a cascade of fluorescent sparks.

"How am I doing down there?" Sharon chimes as she touches his mind and blends her dream-body with his.

Veil laughs. "Down where?"

"Down, around, over, under, between—whatever. What's happening to the rest of me?"

"You're as beautiful as ever," Veil says, reacting to the anxiety in her voice, gently caressing her mind.

"Yes, Sharon. Obviously you're being fed intravenously, but you're breathing on your own. You're bathed every day, massaged and moved into a different position every six hours."

"Am I still at the Institute for Human Studies?"

"You're being cared for in a CIA clinic in Langley, Virginia—it's the best."

"You've never mentioned that before."

Sharon frowns. "But the CIA is your enemy." "Not the CIA—just a man by the name of Orville Madison."

"He's the 'fat fortune-teller' you once mentioned to me, the man who wants you dead, isn't he?"

"Yes. He was my controller twenty years ago, but he's moved up in the world since then; now he's the CIA's Director of Operations."

"I don't understand. If this man hates you so much, why would he allow me to be cared for in a CIA clinic?"

Veil does not reply. He tries to draw Sharon even closer to him, but she resists, moving back slightly in the endless corridor. In the wall to Veil's left, something moans.

"He's the man I made the arrangements with. Madison supervises your care."

"But he wants to kill you!"

"Yes, but in his own time and in a place of his choosing. For now it gives him pleasure to have power over me."

"And he has that power over you because of me, doesn't he?"

"What have you given him, Veil?"

My soul,
Veil thinks. He says, "I've agreed to carry out certain special assignments for him when he asks—and if I approve of the assignments."

"You've delivered yourself to a man who hates you in order to save me."

Veil shrugs. "I consider it a small price to pay for the woman I love. Besides, if not for what happened at the Institute, he might have put a bullet in my brain by now."

"But he intends to do that anyway!"

He would never be free, Veil thinks as he glances to his right at the gray, chiming wall beyond which he had seen Sharon's flesh begin to glow and melt from her bones. His soul would belong to Orville Madison for as long as the CIA Operations Director allowed him to live.

"Madison is keeping his part of the bargain," Veil replies easily. "You're being kept in good health, and a team of specialists is constantly trying to work out ways to bring you back to consciousness."

"One day, maybe, I'll just be able to follow you back through the Lazarus Gate."

"Does this Orville Madison know that you can contact me?

"Does he know anything about this thing you can do?"

"He knows about my brain damage and vivid dreaming, but not the rest of it."

Sharon laughs. "Wouldn't he be surprised!"

"But what does he think happened to me?"

"He just thinks you're in a coma."

"But he must have seen my EEG. Nobody in a simple coma spikes like that."

"He knows about the Lazarus Gate, but he thinks it's nothing more than a fleeting state of consciousness a very few people pass through just before death. He's right, of course."

"Except for you and me, Veil."

"Except for you and me." He could come and go at will; Sharon's mind was trapped there.

"If he ever found out that you can do this, he'd try to make you use it for him, wouldn't he?"

"Of course. Fortunately for me, Orville Madison's main interest is in controlling everybody around him and screwing his enemies. He loses interest quickly in things for which he can't see a practical application to his primary goals." "Could you actually spy for him with your dreaming?"

"No. My dreams are just that—dreams. They're projections of my own mind, not an entry into anyone else's."

Howling at the Moon [The Mystic Museum] (Siren Publishing Ménage Amour) by Loc Glin
The Last Honorable Man by Vickie Taylor
The Alley of Love and Yellow Jasmines by Shohreh Aghdashloo
Swan Song by Judith K. Ivie
The Plain Old Man by Charlotte MacLeod
Enon by Paul Harding
Take Me Out by Robertson, Dawn
The Passionate Olive by Firenze, Carol
The Ghost and Mrs. Hobbs by Cynthia DeFelice
Strangers with Benefits (Siren Publishing Classic) by Jennifer Willows
Our partner