Read Kelsey and the Quest of the Porcelain Doll Online

Kelsey and the Quest of the Porcelain Doll 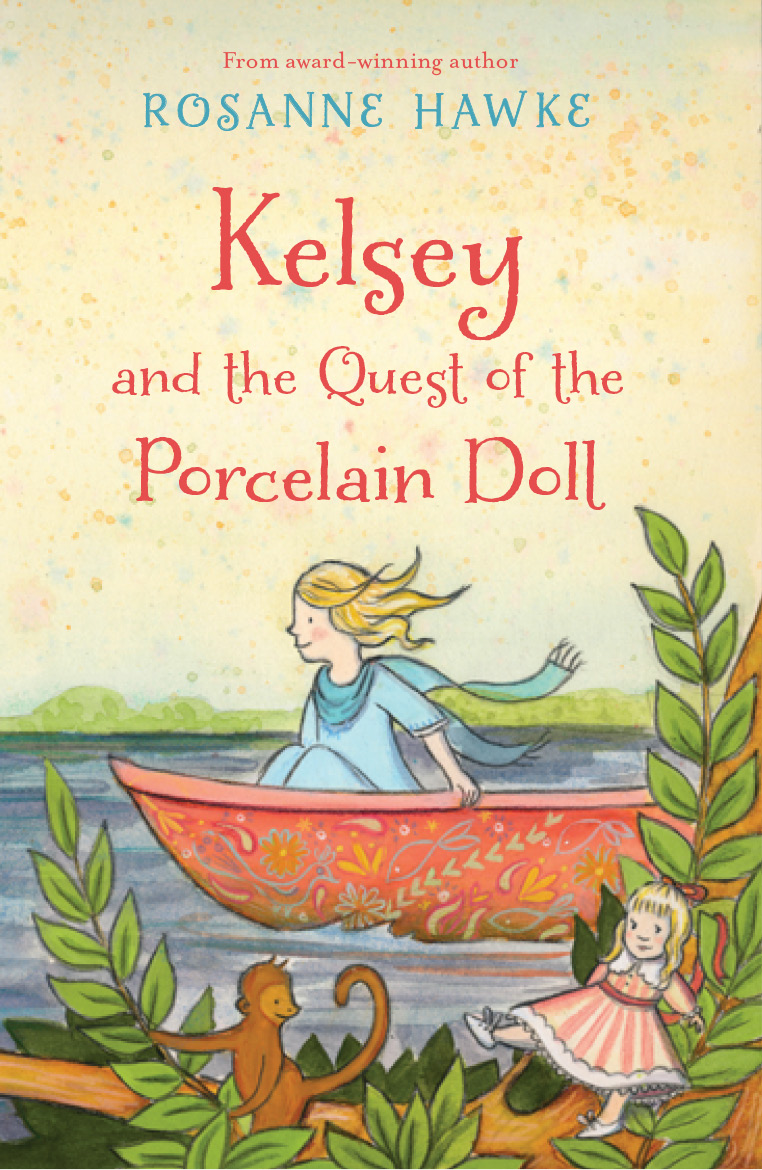 Rosanne Hawke
lived in Pakistan and the United Arab Emirates as an aid worker for ten years
and is the author of over twenty books for young people
. Her books include
Killer Ute
;
Soraya
,
the Storyteller
;
Mustara
and
Taj and the Great Camel Trek
,
which won the 2012 Adelaide Festival Children's Book Award. Rosanne is a Carclew, Asialink, Varuna and May Gibbs Fellow, and a Bard of Cornwall. She teaches Creative Writing at Tabor Adelaide, and writes in an old Cornish farmhouse with underground rooms near Kapunda, South Australia.

Shahana: Through My Eyes

Taj and the Great Camel Trek

The Wish Giver
, with L Penner and M Macintosh (illus.)

The Last Virgin in Year 10

A Kiss in Every Wave 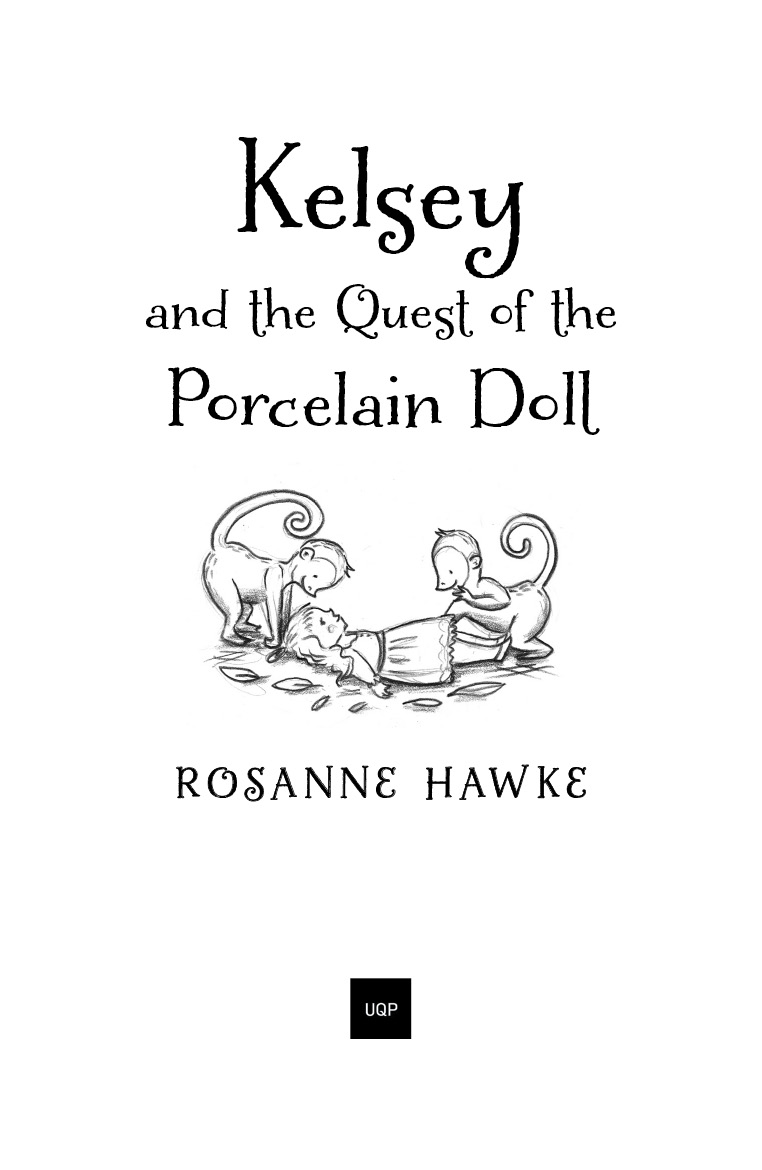 For my granddaughter Amelia Claire,

and in memory of Amy Jo Inniger.

K
elsey Trengove sat in the black and yellow taxi. Bollywood music blared from the radio. Kelsey thought it was too loud but her dad clapped along. She wound down the window and screwed up her nose.

Nothing looked familiar outside. There were so many people on the street, either walking or on bicycles, or driving in three-wheeled blue vehicles. Everyone wore the same style of clothes with baggy trousers and long shirts. Even buffaloes and a camel ambled along where the cars were supposed to go. The taxi driver tooted the horn to warn people and dogs off the road. All the other vehicles did the same. The noise was deafening.

Her mum tried to hold her hand but Kelsey folded her arms across her chest. âWhy did Dad have to come to Pakistan to build houses? Couldn't he keep doing that in Australia?' She was going to be nine in October and she wanted to turn nine in Australia with a pool party at Chantelle's. Not here. She'd miss the spring swimming carnival too and she was one of the best swimmers in her class.

Mum said, âI've told you, so many people lost their houses in the flood. This is one way we can help. Dad's good at building houses.'

Kelsey wished he wasn't, and then they could have stayed home. âWhy couldn't I stay with Nanna Rose?' Kelsey asked. Nanna Rose lived in a granny flat behind their house. Almost every day after school Kelsey visited her and they had afternoon tea in pretty bone china cups. And they ate different coloured macarons. Nanna Rose was the best cook.

âYou're old enough to see where I grew up,' Dad said. âAnd it's only for a few months.'

But that would be too long. A year ago Nanna Rose had promised Kelsey a porcelain doll for her ninth birthday. Now that wouldn't happen because Nanna Rose was thousands of kilometres away and Kelsey was stuck in Pakistan.

That afternoon, Kelsey and her parents arrived at a village. There was water lapping the sides of the houses and everything was muddy. Some houses in the distance looked like little islands. Dad was quiet when he saw the damage the flood had done.

After a while, Dad blew out a breath and looked at Kelsey. âI never saw anything like this when I lived here with Nanna and Grandad. Come on, Kels,' he said then. âHere's our house.'

Kelsey looked at the mudbrick house and frowned. It didn't even look like a house and she could see where the water had been inside. âIt's not our house.' She pouted.

Dad gave her a hug. âYou'll find something to like soon.'

Kelsey was sure she wouldn't. She didn't like her room at all. It was hot. There was no air conditioner, just a fan that clunked from the ceiling. It sounded as if it would fall onto her bed while she slept. Her bed was made of thick string woven on a wooden frame. Dad called it a
charpai
. She shifted it closer to the wall and put her Barbie on it to make the room look familiar.

The toilet was even worse. It was sunk into the cement floor of the bathroom. She had to squat over it to wee just as if they were on a long drive at home and had to crouch behind a bush. And she had to put the toilet paper in a wastepaper basket after she'd used it.

How would she get through the next few months?

A man in white baggy trousers and a long shirt arrived. âWelcome to Nazabad, Mr Trengove. My name is Waheed. I am managing the house building project.'

Mr Waheed brought food that his wife had made.

âWow, real curry and
chapattis
.' Dad was so excited he said, â
Shukriya
'.

âIt means thank you,' Mr Waheed answered. âYou'll learn many new words while you are here.' Mr Waheed smiled while he talked. Kelsey tried not to like him but he looked at her as if she were a princess.

âYou will be having a good time here,' Mr Waheed said to Kelsey. âThank you for coming to help.'

She hadn't come to help at all, Dad and Mum had, but she gave Mr Waheed a smile.

âMy daughter Shakila is your age. You must come and play with her. She will like your yellow hair.'

Kelsey nodded before she could think about it and then wished she hadn't. She didn't want to make new friends here. She wanted to be in Australia playing with Chantelle. 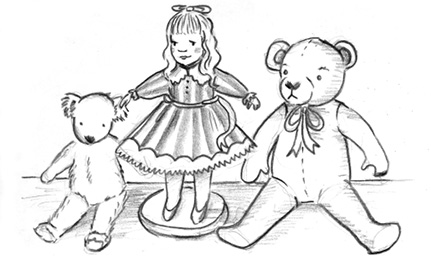 A
fter Kelsey had put on her PJs Dad set up the laptop. Kelsey was amazed it worked. He clicked on Skype and rang Nanna Rose. And there she was on screen. Kelsey was so relieved to see her familiar face she had to blink away tears.

Kelsey loved the times that Nanna Rose put her to bed when Mum was on a shift at the hospital and Dad was away. Suddenly Kelsey knew what she needed. âNanna, can you tell me a story just as if I were with you?'

âOne about a doll, Nanna.' Nanna Rose had a strange look on her face. âWhat's wrong, Nanna?'

âNothing's wrong. I'm just thinking hard for a story. What name should the doll have, Kelsey?'

âAmy Jo.' Kelsey didn't have to think about that. One of the big girls at school was called Amy Jo and she was always kind to Kelsey, giving her muffins or notes signed âfrom your secret angel'. She was like a big sister and Kelsey missed her too.

âWhat sort of doll is she?' Nanna asked.

Kelsey loved playing this game. Nanna Rose always asked her for ideas so that Kelsey ended up telling half the story.

âWhat is she wearing, Nanna?'

âThat sounds nice. Where is she?'

Nanna gave her storyteller's smile and Kelsey giggled. âAmy Jo stands alone on the top shelf in a toyshop.'

âThere have to be bears, Nanna, so she won't be lonely. The bears can talk to her.'

âSome bears have voice boxes. My old bear at home growls when I turn him over.'

âAll right, there are talking bears on the shelf too.'

A mysterious look came over Nanna's face. âShe's thinking about a quest.'

âShe wants to find someone to love her.'

Amy Jo stood on the shelf in the Teddy Bear Shop. She wished she could sit but she could only do that if someone took her from her stand and sat her down. There was only one thing that she could do by herself. She could open and shut her eyes.

Some of the bears weren't as kind as they looked. âYou are too hard,' one bear growled. âNo one will want to cuddle you.'

She knew what he meant. Her head, arms and legs were made of porcelain, but her body was made of cloth. Her beautiful pink-and-white striped dress hid her body. She was proud of her dress for it had lace around the hem. She was proud of her hair too. One girl who came into the shop said it looked like sparkling gold.

Amy Jo longed for someone to brush it. If only there were a child who loved her. The bears were so huggable that children always bought one of them. No one ever wanted to buy her.

The sun shone through the window. The shop doorbell rang each time the children came and went. When Amy Jo had been in the shop a year she was about to give up hope. Then, one day, the doorbell dinged and a lady with wrinkles around her smiley eyes stood in front of Amy Jo.

âYes,' the lady said. âYou will do nicely.'

She lifted Amy Jo down and took her to the counter.

The shop assistant said, âShall I wrap the doll? Is it a gift?'

âYes,' the lady said. âShe has to travel a long way.'

The shop assistant lay Amy Jo in a box lined with tissue paper. âIt will be sad to see her go,' he said. âShe's such a fine doll.'

When the lid went on, Amy Jo didn't like the dark. She enjoyed the sunlight and now she couldn't see a thing.

The doorbell rang as they left the shop and the box shook as the lady carried it. Amy Jo hoped she could get out of the box soon. She imagined a girl holding her, a girl who wouldn't mind that she was hard to cuddle.

Suddenly the shaking stopped. Amy Jo's stomach felt very strange and then she was standing on her head.

The lady said, âI need to send this box by airmail. It's fragile.'

âPut it in this bubble envelope,' a man said. Then he added, âThat will be twenty-five dollars.'

âHow long will it take?' the lady asked. âIt mustn't be late.'

âNo worries,' the man said. âIt will arrive in a week.'

Outbreak by Chris Ryan
Tahoe Blues by Lane, Aubree
L. Ann Marie by Tailley (MC 6)
Out of Practice by Penny Parkes
Cougar's Prey (9781101544846) by Sweazy, Larry D.
Shadows of the Past by Brandy L Rivers
Holding On by Marcia Willett
Every Brilliant Eye by Loren D. Estleman
What Happens at Christmas by Jay Northcote
The Relic by Maggie Nash
Our partner