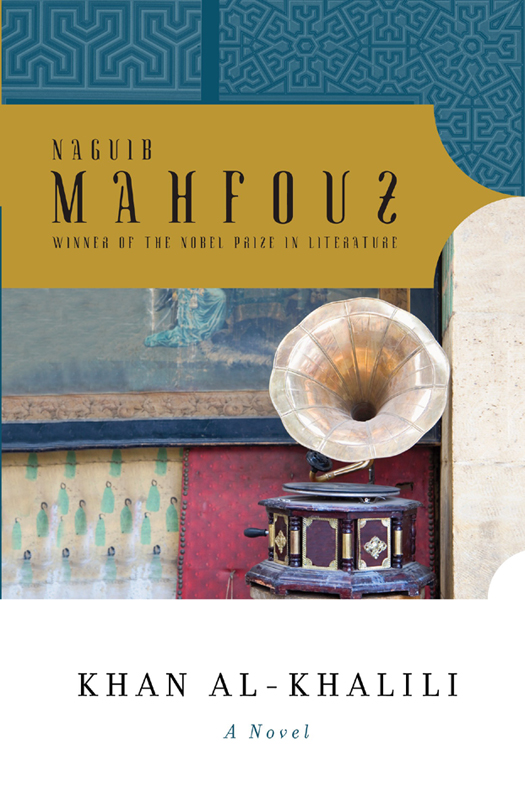 Naguib Mahfouz was one of the most prominent writers of Arabic fiction in the twentieth century. He was born in 1911 in Cairo and began writing at the age of seventeen. His first novel was published in 1939. Throughout his career, he wrote nearly forty novel-length works and hundreds of short stories. In 1988 Mahfouz was awarded the Nobel Prize in Literature. He died in 2006.

THE FOLLOWING TITLES BY NAGUIB MAHFOUZ
ARE ALSO PUBLISHED BY ANCHOR BOOKS:

The Beggar, The Thief and the Dogs, Autumn Quail
(omnibus edition)
Respected Sir, Wedding Song, The Search
(omnnibus edition)
The Beginning and the End
The Time and the Place and Other Stories
Midaq Alley
The Journey of Ibn Fattouma
Miramar
Adrift on the Nile
The Harafish
Arabian Nights and Days
Children of the Alley
Echoes of an Autobiography
The Day the Leader Was Killed
Akhenaten, Dweller in Truth
Voices from the Other World
Khufu’s Wisdom
Rhadopis of Nubia
Thebes at War
Seventh Heaven
The Thief and the Dogs
Karnak Café
Morning and Evening Talk
The Dreams
Cairo Modern

All rights reserved. Published in the United States by Anchor Books, a division of Random House, Inc., New York, and in Canada by Random House of Canada Limited, Toronto. Originally published in Arabic as
Khan al-Khalili
in 1946. Copyright © 1946 by Naguib Mahfouz. This translation first published in English in hardcover in Egypt and the United States by The American University in Cairo Press, Cairo and New York, in 2008.

The Cataloging-in-Publication Data is on file at the Library of Congress.

I
t was half past two in the afternoon on a September day in 1941, the exact time when civil servants left their government offices. Streams of them came pouring out of the ministry’s doors like a raging torrent. Their minds had long since become preoccupied with a combination of hunger and sheer boredom, and now they all scattered in different directions under the burning glare of the sun.

Ahmad Akif, whose job was at the Ministry of Works, was among them. At this time of day he usually made his way back to al-Sakakini, but today was different: for the first time he was heading toward al-Azhar. He had been living in al-Sakakini for a long time, stretching back many years, whole decades in fact. Those many years constituted a veritable storehouse of memories—memories of childhood, youth, adulthood, and then middle age. The incredible thing was that it had only taken the family just a few days to make up their minds to pack up and leave. They had all felt completely secure in their old house; they had
never imagined leaving. But then during the short interval between one evening and noon the next day everyone had started yelling, “A pox on this awful quarter!” Fear and panic had taken over; there was no longer any point in trying to persuade scared folk to change their minds. The old house had soon become a memory of the past, and the new house in Khan al-Khalili was a reality from today and onward into the future. Well might Ahmad Akif quote the phrase, “Praise be to the One who changes things but who never changes Himself!”

The suddenness of the decision to move had left him in a quandary. His heart kept drawing him back to the beloved old quarter; he bitterly regretted the feeling of being tossed out and thrust into one of the ancient popular quarters of Cairo. But at the same time he could not forget the relief he had felt when he realized that he would now be far away from a kind of hell that threatened imminent destruction. Maybe tonight would turn out to be the first time he managed to get any sleep since that terrible night, the one that had given the people of Cairo such a terrible shock.

It was therefore with mixed emotions—sadness and forbearance—that he paced the sidewalk waiting for the trolley that would take him to Queen Farida Square. Sweat was pouring off his brow, and yet he could still feel a certain frisson of pleasure at the thought of new discoveries and the prospect of change: a new place to live, new environment, new atmosphere, and new neighbors. Maybe luck would turn out differently and good times would return once again; perhaps the ever-so-subtle intimations he was now feeling would manage to shake off the layers
of dust left behind by so much lethargy and inject some new sense of life and energy.

This then was the sheer delight of exploration, taking risks, and pursuing dreams; not only that, but also a hidden sense of superiority that grew out of his moving from one quarter to another that was of lower status in both prestige and educational level. He had not even set eyes on the new house as yet because he had been at work in the ministry when he was notified that the furniture had been moved first thing in the morning. Now here he was, on his way to the new house following the directions he had been given.

“It’s only temporary,” he told himself. “They’ll have to put up with it as long as the war lasts. Then things will get better.”

Could it have turned out any better? Would it have made more sense to stay in the old quarter, even though it would involve watching and listening to the fearsome noises of death?

He could not stand spending ages doing nothing, so he kept pacing the sidewalk. By now his nerves seemed to have calmed down a bit, but the way he was smoking a cigarette so quickly was evidence enough of how preoccupied he was. His nervous gestures, anxious expression, and generally disheveled appearance made him look like an exhausted old man with heart problems; the look in his eyes was distracted, as though he were out of touch with his surroundings. Actually he was approaching his forties. The fact that he was so tall and thin might attract people’s attention, not to mention the regrettably scruffy state of his clothes. To tell the truth, his torn trousers, the too-short
sleeves of his jacket, the sweat and dust that accumulated at the rim of his tarboosh, the tightness of his shirt, the shabby necktie, his balding pate, and the creeping grayness that showed at his temples and the back of his head—all these features suggested that he was getting on in years. Beyond all that, there was his skinny, elongated face with its pale complexion, part of a small-sized cranium that sloped gently toward his fairly narrow forehead framed by eyebrows that were straight and widely separated. His eyes were widely spaced too and narrow, almost filling the entire contours of his face; whenever he squinted so as to concentrate on something or shield them from the sun’s glare, they looked as though they were shut; their deep honey-colored irises simply vanished. His eyelids drooped, and their corners had by now acquired a reddish hue. He had a narrow nose, thin lips, and a small, tapered beard. Incredible as it may seem, there had been a time when people regarded him as someone who was fussy about his appearance, a trait that had made him appear quite acceptable. However, a combination of despair and thriftiness, followed by a peculiar aspiration to look like an intellectual, had robbed him of any concern about either his person or his manner of dress.

As he boarded trolley no. 15 he mustered a smile that revealed a set of teeth yellowed by smoking. From Queen Farida Square he caught another trolley, no. 19. Out of force of habit he had actually made a mistake by throwing away the ticket that he had bought on the first trolley. He needed to go to al-Azhar, and so he had to buy another ticket, all the while laughing at himself in exasperation.

His secret craving for sex gnawed at him; truth to tell, for some time he had inured himself to ever being head of a household, and to staying single, at least up until now. He never spent even a penny without thinking about it, so his cravings were not so strong as to prevent him from spending money, but even so he still found it painful when forced to do so. Finally he reached al-Azhar and headed toward Khan al-Khalili, his new destination. He made his way through a narrow alleyway in the direction of the quarter in question. To his left and right were new apartment blocks with countless alleyways and walks interspersed between them; they looked like row upon row of imposing barracks where you could easily lose your way. All around him he spotted cafés teeming with customers and the occasional store, some selling taamiya, others jewelry and trinkets. And there were hordes of people, a never-ending flow, some wearing turbans, others fezzes, and still others skullcaps. The air was filled with shouts, yells, and screams, all of them guaranteed to shatter the nerves of someone like himself. He felt ill at ease and jumpy. He had no idea where he was going, so he went over to a Nubian doorman sitting beside the entrance to a building and said hello.

Ctrl-Z by Andrew Norriss
A ruling passion : a novel by Michael, Judith
Among Wildflowers by Stella Rose
Just Not Mine by Rosalind James
Midnight Craving: Midnight Vice, Book 1 by Lolita Lopez
How Nina Got Her Fang Back: Accidental Quickie (Accidentally Paranormal Series Book 13) by Dakota Cassidy
Cottage Country by Edwards, JL
Borderlands: Unconquered by John Shirley
The Starbucks Story by John Simmons
Sins and Scars (Sinners Book 1) by K. Renee
Our partner