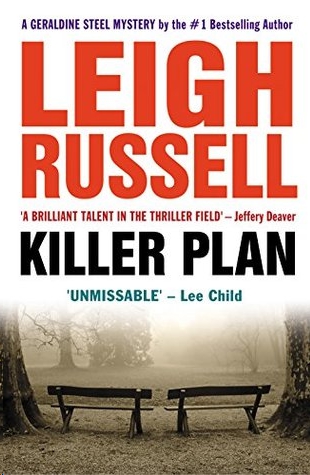 Caroline’s husband has been killed, but she can’t turn to the police without implicating herself in his murder. When one of her 10-year-old twins is kidnapped, the desperate mother is forced to resort to drastic measures to get him back. As time runs out, and a second body is discovered, Geraldine realises she has a secret that might just help solve the case. But the truth could destroy her career. Faced with the unenviable decision of protecting herself or the widow she barely knows, Geraldine must grapple with her conscience and do the right thing before the death count mounts any further.

Leigh Russell studied at the University of Kent, gaining a Master’s degree in English. A secondary school English teacher, and guest university lecturer in creative writing, she is married, has two daughters, and lives in North West London. Her first novel, shortlisted for the CWA best first novel award,
Cut Short
, was published in 2009. This was followed by
Road Closed
in 2010,
Dead End
in 2011,
Death Bed
in 2012 and
Stop Dead
in 2013 and
Fatal Act
in 2014. Her first title in the new series starring DI Peterson,
Cold Sacrifice
was also published in 2013 followed by
Race to Death
in 2014.

CRITICAL ACCLAIM FOR
RACE TO DEATH

‘Leigh Russell has become one of the most impressively dependable purveyors of the English police procedural’ –
Marcel Berlins
,
Times

‘As tense openings go, they don’t come much better than this’ –
Bookbag

‘If you enjoy a well-written mystery with a well-constructed and thought-out plot line then this is the book for you... it is my BOOK OF THE MONTH’ –
Crime Book Club

‘Leigh Russell weaves a fascinating tale that had me completely foxed. Whilst the mystery is tantalising the characters also fascinate, so clearly are they drawn’–
Mystery People

‘Fast-paced and unrelenting, and with more than enough twists to keep the most demanding reader entertained,
Race to Death
certainly doesn’t disappoint! 4.5/5*’
–
Claire Loves to Read

‘Full of twists, turns and dark secrets. The plot gallops along creating suspense on every page’–
Creuse News

‘A complex mystery rich in characters, this new series promises some interesting times ahead for Ian Peterson’ –
Promoting Crime Fiction

‘Ian Peterson as a character could potentially be just as good,if not better, than Geraldine Steel’–
Best Crime Books

‘a most intriguing and well executed mystery and... an engrossing read’–
Shotsmag

‘a truly great author... enough mystery and drama for the most ardent of mystery fans’–
Bookaholic

‘All the things a mystery should be, intriguing, enthralling, tense and utterly absorbing’ –
Best Crime Books

‘For lovers of crime fiction this is a brilliant, not to be missed, novel’–
Fiction is Stranger Than Fact

‘a well-written, a well-researched, and a well-constructed whodunnit. Highly recommended’
– Mystery People

‘a whodunnit of the highest order. The tightly written plot kept me guessing all the way’
–
Crimesquad

‘Earlier books have marked her out as one of the most able practitioners in the current field’ –
Barry Forshaw
,
Crime Time

‘A well-written, well-plotted crime novel with fantastic pace and lots of intrigue’–
Bookersatz

‘DEATH BED
is her most exciting and well-written to date. And, as the others are superb, that is really saying something! 5*’
–
Euro Crime

‘The story itself was as usual a good one, and the descriptive gruesomeness of some scenes was brilliant’ –
Best Crime Books

‘I could not put this book down’ –
Newbooks Magazine

‘A brilliant talent in the thriller field’ –
Jeffery Deaver

‘a macabre read, full of enthralling characters and gruesome details which kept me glued from first page to last’ –
Crimesquad

‘Well-written and absorbing right from the get-go... with an exhilarating climax that you don’t see coming’ –
Euro Crime

‘Leigh Russell does a good job of keeping her readers guessing. She also uses a deft hand developing her characters, especially the low-lifes... a good read’–
San Francisco Book Review

‘perfect character building... cleverly written... can’t wait for the next one’
–
B
est Books to Read

‘
Road Closed
is a gripping, fast-paced read, pulling you in from the very first tense page and keeping you captivated right to the end with its refreshingly compelling and original narrative’ –
New York Journal of Books

‘It’s an easy read with the strength of the story at its core... If you want to be swept along with the story above all else,
Cut Short
is certainly a novel for you’–
Crimeficreader

‘Simply awesome! This debut novel by Leigh Russell will take your breath away’–
Euro Crime

Cut Short
is a book I had to read in one sitting... excellent new series’
–
Murder by Type

‘fine police procedural, with a convincing if disconcerting feel of contemporary Britain’ –
The Compulsive Reader

‘
Cut Short
is not a comfortable read, but it is a compelling and important one. Highly recommended’ –
Mystery Women