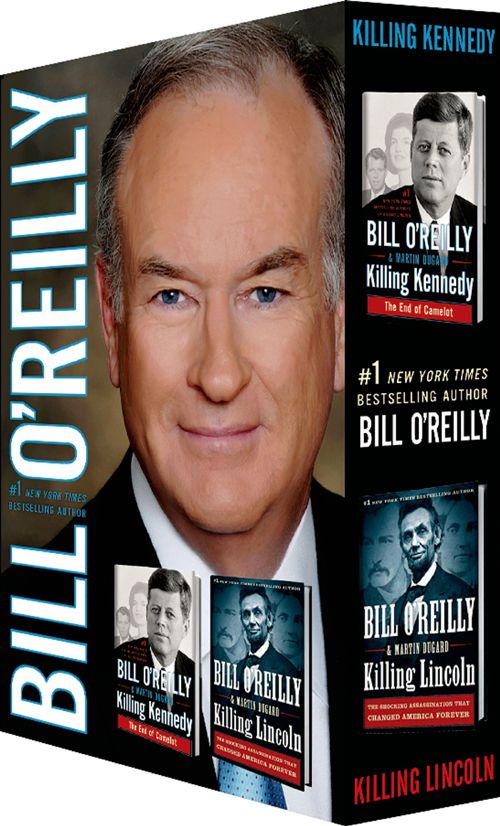 Part Two - The Ides of Death

Killing Lincoln
The Shocking Assassination that Changed America Forever
Bill O’Reilly
and
Martin Dugard
For Makeda Wubneh,
who makes the world a better place
A NOTE TO READERS
The story you are about to read is true and truly shocking. It has been 150 years since the beginning of the Civil War, the bloodiest war in our nation’s history, a conflict so full of horror it is almost impossible to describe. The assassination of President Abraham Lincoln, only days after the end of the war, was a terrible tragedy. Much has been speculated about the events leading up to the murder and immediately afterward, but few people know what
really
happened.
Before historian Martin Dugard and I began writing this book, I
thought
I understood the facts and implications of the assassination. But even though I am a former teacher of history, I had no clue. The ferocious assassination plan itself still has elements that have not been clarified. This is a saga of courage, cowardice, and betrayal. There are layers of proven conspiracy and alleged conspiracy that will disturb you. You will learn much in these pages, and the experience, I believe, will advance your understanding of our country, and how Lincoln’s murder changed it forever.
This book is a departure from the
contemporary nonfiction I have written for more than a decade and from the daily news analysis that I do on television. But the lessons you will learn within these pages are relevant to all our lives. For those of us who want to improve the United States and keep it the greatest nation in the world, we must be aware of the true heroes who have made the country great as well as the villains who have besmirched it.
Finally, this book is written as a thriller. But don’t let the style fool you. What you are about to read is unsanitized and uncompromising. It is a no spin American story, and I am proud of it.
BILL O’REILLY
April 3, 2011
Long Island, New York
PROLOGUE
SATURDAY, MARCH 4, 1865
WASHINGTON, D.C.
T
he man with six weeks to live is anxious.
He furls his brow, as he does countless times each day, and walks out of the Capitol Building, which is nearing completion. He is exhausted, almost numb.
Fifty thousand men and women stand in pouring rain and ankle-deep mud to watch Abraham Lincoln take the oath of office to begin his second term. His new vice president, Andrew Johnson, has just delivered a red-faced, drunken, twenty-minute ramble vilifying the South that has left the crowd squirming, embarrassed by Johnson’s inebriation.
So when Lincoln steps up to the podium and delivers an eloquent appeal for reunification, the spiritual message of his second inaugural address is all the more uplifting. “With malice toward none, with charity for all, with firmness in the right as God gives us to see the right, let us strive on to finish the work we are in, to bind up the nation’s wounds, to care for him who shall have borne the battle and for his widow and his orphan, to do all which may achieve and cherish a just and lasting peace among ourselves and with all nations,” the president intones humbly.
Despite his exhaustion, Lincoln is charismatic. And momentarily energized.
Suddenly, the sun bursts through the clouds as he speaks, its light enveloping the tall and outwardly serene Lincoln. But 120 miles away in the Virginia railroad junction of Petersburg, any thought of serenity is a fantasy. The Confederate army, under the command of General Robert E. Lee, has been pinned inside the city for more than 250 days by Union forces under the command of General Ulysses S. Grant. Though living in trenches and reduced to eating rats and raw bacon, Lee’s men will not surrender. Instead, Lee is making plans to slip out of Petersburg and escape south to the Carolinas. If he succeeds, Lincoln’s prayer for a reunified United States of America may never be answered. America will continue to be divided into a North and a South, a United States of America and a Confederate States of America.
Lincoln’s inaugural speech is a performance worthy of a great dramatic actor. And indeed, one of America’s most famous thespians stands just a few feet away as Lincoln raises his right hand. John Wilkes Booth is galvanized by the president’s words—though not in the way Lincoln intends.
Booth, twenty-six, raised in Maryland, is an exceptional young man. Blessed with a rakish smile and a debonair gaze, he is handsome, brilliant, witty, charismatic, tender, and able to bed almost any woman he wants—and he has bedded quite a few. It’s no wonder that the actor has known success on the Broadway stage.
His fiancee stands at his side, a sensual young woman whose senator father has no idea that his daughter is secretly engaged to a man of Booth’s lowly theatrical calling. Lucy Hale and John Wilkes Booth are a beautiful young couple quite used to the adoration of high society and the opposite sex. Yet not even she knows that Booth is a Confederate sympathizer, one who nurses a pathological hatred for Lincoln and the North. Lucy has no idea that her lover has assembled a crack team of conspirators to help him bring down the president. They have guns, financing, and a precise plan. At this point, patience is their watchword.
Standing in the cold Washington drizzle in the shadow of the Capitol dome, Booth feels nothing but hot rage and injustice. The
actor is impulsive and prone to the melodramatic. Just before Lincoln’s speech, as the president stepped out onto the East Portico, Booth’s carefully crafted conspiracy was instantly forgotten.

John Wilkes Booth: celebrity, Confederate sympathizer, assassin
Though he had no gun or knife, Booth lunged at Lincoln. An officer from Washington’s Metropolitan Police, a force known to be heavily infiltrated by Confederate sympathizers, grabbed him hard by the arm and pulled him back. Booth struggles, which only made Officer John William Westfall grasp him tighter. Like everyone else in the city, Westfall is well aware that there are plots against Lincoln’s life. Some say it’s not a matter of if but when the president will die. Yet rather than arrest Booth, or even pull him aside for questioning, Westfall accepted Booth’s excuse that he merely stumbled. Arresting a celebrity like Booth might have caused the policeman problems.
But Booth is definitely not finished. He seethes as he listens to Lincoln’s speech. The grace and poetry of the words ignite his rage. The sight of so many black faces beaming up at Lincoln from the crowd makes him want to vomit. No, Booth is most definitely not finished. If anything, his determination to knock Lincoln off his “throne” becomes more intense.
Lincoln isn’t finished, either. The president has epic plans for his second term in office. It will take every one of those four years, and maybe longer, to heal the war-torn nation. Healing is Lincoln’s one overriding ambition, and he will use every last bit of his trademark determination to see it realized. Nothing must stand in his way.
But evil knows no boundaries. And it is a most powerful evil that is now bearing down on Abraham Lincoln.

Paris Times Eight by Deirdre Kelly
The Lost Years by T. A. Barron
The Pursued (The Breeding Prophecy) by Andria, Alexx
After Ever After (9780545292788) by Sonnenblick, Jordan
Maldad bajo el sol by Agatha Christie
Wrongful Death by Robert Dugoni
La calle de los sueños by Luca Di Fulvio
Fearless by Rafael Yglesias
Courting the Darkness by Fuller, Karen
Blades of the Old Empire by Anna Kashina
Our partner