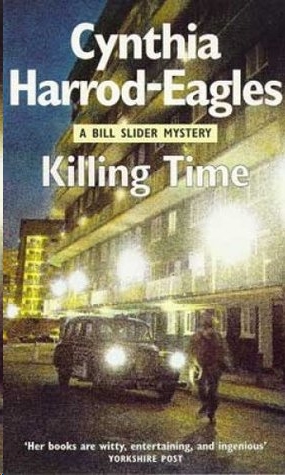 Cynthia Harrod-Eagles
was born and educated in Shepherd’s Bush, and had a variety of jobs in the commercial world, starting as a junior cashier at Woolworth’s and working her way down to Pensions Officer at the BBC. She won the Young Writers’ Award in 1973, and became a full-time writer in 1978. She is the author of over sixty successful novels to date, including thirty volumes of the
Morland Dynasty
series.

THE MEASURE OF DAYS

Early on Monday morning, DI Carver, about to head downstairs, saw a familiar figure walking away from him along the corridor. ‘Bill!’

‘I didn’t know you were back.’ Carver looked him over keenly. ‘Shouldn’t you still be on sick-leave? You look terrible.’

‘Thanks,’ Slider said. ‘I feel a bit under the weather, but Honeyman asked me to come in. We’re short-handed, with Atherton in the cot.’

‘How is he?’ Carver’s face pursed with a moment’s sympathy.

‘Still very poorly.’ Slider marvelled for a moment at the word. It was how the hospital had described him yesterday. They had a box of these strange shorthand terms for the varying degrees of human distress – critical, comfortable, stable, poorly – which they used like flashcards. It was kinder than describing reality. Reality was Atherton with a hole in him; Atherton a white face and fragile blue eyelids above a sheet, drips and drains and bags, and a cradle to keep the bedclothes off the wound, so that he looked like Tutankhamun without the gilding.

It was hard to think of clearing up the Gilbert case as a success, though Gilbert was under wraps and the CPS was as chuffed about it as the CPS ever was about anything. But Slider had stupidly allowed himself to be ambushed by Gilbert, coshed, trussed up and, for a harrowing period, kept prisoner and threatened with a knife. When Atherton had come looking for him, Gilbert had jumped him, and the same knife had ended up where Atherton normally kept
quenelles de veau
or designer sausages with red onion marmalade. Slider had
narrowly escaped a fractured skull, but Atherton had nearly died, and was not out of the woods yet.

‘You’ve been to see him?’ Carver asked.

‘More tubes through him than King’s Cross,’ Slider said.

‘It’s a bastard,’ Carver said in omnibus disapprobation. ‘He’ll be off a while then.’

It was not a question. Slider shifted uncomfortably away from the subject, and said instead, ‘I hear Mills is leaving the Job?’ DS Mills, alias Dark Satanic, an old colleague of Slider’s, had been a suspect for a time in the Gilbert case.

‘Yeah. Well, I can’t blame him. It’d be tough after what he’s been through. But I’d only just got the extra manpower,’ he complained. ‘I don’t suppose Honeyman’ll roll for it again – not with you being short.’ He gave Slider a resentful stare as if it was his fault.

‘What, Mills? Wales, I gather. What’s that place he went on holiday every year?’

‘That’s it. This bloke he met there, owns his own business, offered Mills a billet. Salesman. Computerised security systems. Thought it’d be a boost to have an ex-dick toting the brochures round.’

Poor old Dark Satanic, Slider thought. Going on the knocker was a bit of a come-down from the CID. Or was it? ‘I suppose it’s a job,’ he said doubtfully.

‘I don’t think he minds,’ Carver shrugged. ‘I think he wants to see a bit of life before it’s too late.’

‘He’s taking his mum with him,’ Carver said – one of his better non-sequiturs. ‘I dunno but what he hasn’t got the right idea,’ he went on, his face settling into familiar creases of gloom. ‘The Job’s changing, Bill. Every day coppers are getting shot and knifed, bashed on the head and dumped, and for what? We work our balls off catching the villains, and the courts let ’em off with a slap on the wrist, because some social worker says they had a rotten mum and a no-good dad. Yeah, but if one of us makes some pissy little mistake in procedure, it’s wrongful arrest and the tabloids start screaming about fit-ups. It makes you wonder why you go on.’

Slider, accustomed to Carver’s style, deduced his heart was not bleeding for Slider’s bashed head or Atherton’s knifed stomach. ‘Has someone else got hurt, then?’

‘You haven’t heard about Andy Cosgrove?’

‘No. What about him?’ Cosgrove was the very popular ‘community beat’ copper for the White City Estate, a PC of the Neo-Dixon school, calm, authoritative, patient, knowledgeable; worth his considerable weight in gold to the Department for the background information he could give on any case arising on his beat.

‘He was attacked last night. Beaten up and left for dead.’

‘Not too clever. He’s in a coma, on life-support in St Stephen’s.’

‘Sod all,’ Carver grunted. ‘He was found on that piece of waste ground round the back of the railway arches down the end of Sulgrave Road, but that’s not where it happened. He got smacked somewhere else, driven there and dumped.’

‘Professional? What was he working on?’

‘Nothing in particular – nothing I know about, anyway. Just routine stuff. Like I said, there’s nothing to go on.’ He was silent a moment, sucking his upper lip. He’d had a moustache once that he used to suck, and though he’d shaved it off ten years ago, the habit remained. A bloke and his face-fur, Slider reflected, could be as close as man and wife. ‘Honeyman’s shitting himself. It was the last straw for him,’ Carver went on. ‘You going to see him? Reporting back?’

‘That’s where I was heading.’

‘He’s like a flea in a frying pan. Wants a bodyguard to cross the parking lot.’

I don’t blame him, Slider thought when he left Carver. Honeyman was only a temp in the post of Detective Superintendent, having been put in as a night watchman when the last Det Sup had died at the crease. Recent events were enough to make anyone nervous, but Honeyman was only a few months short of his pension, and sudden death or grave injury could seriously upset a man’s retirement plans.

Through the open door Slider could see Honeyman at his desk, writing. Slider tapped politely and noted how the little
chap started. ‘Oh, Slider – come in, come in. Good to see you back.’ Honeyman stood and came round the desk and held out his hand, all evidence of unusual emotion. Slider stood patiently while Honeyman looked him up and down – mostly up, because Eric Honeyman was built on a daintier scale than most policemen. ‘And how are you feeling now? Quite recovered? I must say we can use you. We seem to be terribly accident-prone recently. You’ve heard about Cosgrove?’

‘Yes,’ Honeyman said, rather absently. He seemed to be hesitating on the brink of a confidence. ‘I’ve not been feeling quite on top form myself, lately.’ Slider made a sympathetic noise. ‘The fact is,’ Honeyman plunged, ‘I’ve asked to have my retirement brought forward. On medical grounds.’ His eyes flickered guiltily to Slider and away again. ‘This sort of thing – involving your own men – it takes it out of you. I suppose that must sound to you—’

‘Nearly thirty years,’ Honeyman agreed eagerly. ‘It was so different when I joined the service. Policemen were respected. Even the villains called you “sir”. Now you have respectable, middle-class people calling you “pig”. And breaking the law so casually, as if it was just a matter of personal choice.’

Slider had no wish to stroll down this lane in this company. ‘Have you got a date for leaving, sir?’

‘The end of next week. I haven’t announced it yet, but I asked them to relieve me as soon as they could find a replacement.’

Honeyman chatted a bit, something about his retirement plans and his wife, and Slider drifted off. A silence roused him, and coming to guiltily he asked, ‘Is this still confidential, sir? About you going?’

‘I don’t see any reason to keep it a secret. No, I shall send round a memo later today, but you can spread the word to the troops, if you like.’

Start the collection for my leaving present, Slider translated.

McLaren was at his desk, eating a fried egg sandwich from Sid’s
coffee-stall at the end of Shepherd’s Bush Market. Slider knew that was where it came from, because it was the only place nearby you could get them with the yolk in the correctly runny state. You had to be in the right mood to be on either side of a fried egg sandwich, Slider thought. It helped also not to be just out of hospital after a whack on the head.

‘For Chrissake, McLaren, not over your reports,’ Slider said.

McLaren swivelled in his chair and dripped over his waste paper basket instead.

‘How’re you feeling, boss?’ Mackay came forward, tin tray in hand. ‘Can I get you a coffee?’

Slider sat down on the nearest desk – Atherton’s, as it happened. ‘A few days away, and I’m forgotten. You know I don’t drink instant.’

‘Thanks. No sugar, in case you’ve forgotten that as well.’

Mackay apologised in kind. ‘We’ve got some doughnuts.’

His eye found a stranger, a tall man in his late thirties, with sparse, sandy hair, plentiful freckles, and that thick, pale skin that went with them. He wore large gold-rimmed glasses and a bristly moustache, and he gangled forwards, slightly drooping, with an air of practised melancholy, as though expecting to be ridiculed.

‘We haven’t met, guv. I’m your new DS,’ he said, holding out his hand. He had a strange, semi-castrato, counter-tenor voice and a Mancunian accent. His eyes behind the glass were bulgingly soft, greyish-green like part-cooked gooseberries, but held a gleam of humour. With a voice like that, you had to have a sense of humour to survive.

‘Ah. This’ll seem like a bit of a holiday for you, then,’ Slider said.

‘Talking of holidays.’ Anderson sidled up, a menacing photo-envelope in his hand. ‘Would you like to see these, guv? My loft conversion. I’ve done a lot while you’ve been away.’

This was Anderson’s latest project – a Useful Games Room Stroke Extra Bedroom. He had decided, unsurprisingly, to line the whole room with pine stripping. ‘I’ve got before and after shots,’ he added beguilingly.

Slider was deeply grateful to be interrupted by the arrival of WDC ‘Norma’ Swilley. Tall, athletic, blonde, gorgeous, and yet with a strangely unmemorable set of features, small-nosed and large-mouthed in the manner of a Baywatch Beauty, she was, according to Atherton, the living proof that Barbie and Ken had sex. She was a good policeman, but she had a low fool-suffering threshold – which probably accounted for why she was still a DC – and she swept Anderson aside with the authority of a staff nurse.