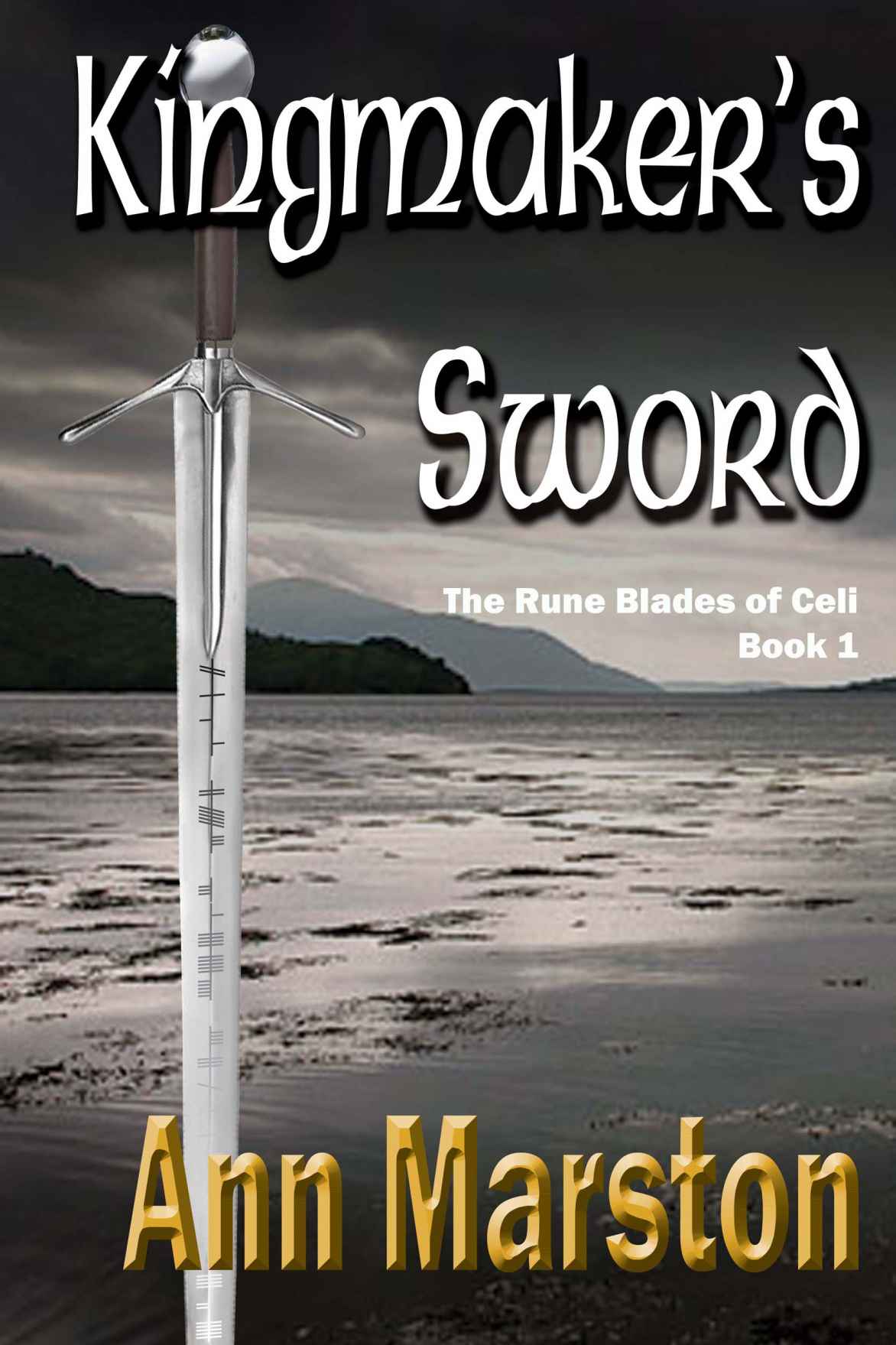 The Rune Blades of Celi

All rights reserved. Without limiting the rights under copyright reserved above, no part of this publication may be reproduced, stored in or introduced into a retrieval system, or transmitted in any form or by any means (electronic, mechanical, photocopying, recording or otherwise), without the prior written permission of both the copyright owner and the publisher of the book.

Publisher’s note: This book is a work of fiction. Names, characters, places and incidents either are the products of the author’s imagination or are used fictitiously, and any resemblance to actual persons living or dead, events, or locales is entirely coincidental.

This is an exceptionally well-done Celtic fantasy....a multiple-layered prince-in-disguise story...a lively mix of action, romance and cultural details. This one grabbed me from the start.

Tolkien fans take note!
Kingmaker’s Sword
has the spirit and the heart of Tolkien in it.”

With
Kingmaker’s Sword,
a beautiful and potent new voice enters the world of fantasy. Gleaming swordplay meets timeless romance in a novel of shimmering extremes.”

Ann Marston brings to life a fascinating medieval world of magic and mayhem, of love and honor, and of complex, engaging characters.

— Adventures of Sword and Sorcery

Kingmaker’s Sword
is a fresh, highly entertaining tale, engagingly written. And the best part is that there’s more to come in the saga.

Part One — The Mouse

He dreamed
again of the Swordmaster. He leapt, kicked and spun, the long, gleaming blade slicing arcs through the air around the ethereal figure opposite him. The twilight, neither dawn nor dusk, cloaked the Swordmaster’s face in shadow. The boy saw only the glitter of brilliant, intense green eyes in the indistinct face as he danced with the sword. Left hand to right hand, then in both hands, the boy’s sword sprang back and forth in answer to the Swordmaster’s flowing motions. The boy moved like a living flame, thrusting, parrying, attacking and defending. The sword felt like an extension of his arm, a living part of him just as surely as his hand and his arm were part of him.

Around and around in the strange light they danced. The boy heard the Swordmaster’s voice, patient, quiet, calm, instructing—always instructing. Guiding him, directing him, focusing him.

The Swordmaster allowed no mistake to go ignored or overlooked. Each error brought the dance to a halt, and the clumsy or incorrectly performed manoeuvre repeated until it was flawless.

“You must flow like water with the blade,” the Swordmaster said. “You must swirl like leaves in a wind. You must never be still. Give your enemy no opening for if you do, surely his steel will cleave your body. You must seek out your enemy and learn his weaknesses before he finds you and exploits your own weaknesses.”

So the boy danced until the sheer exhilaration of the contest swept him away. His body moved, lithe and precise, with the needs of each exercise. His movements, stylized and distinct, flowed together easily, and he knew the satisfaction of winning another step toward perfection.

When the contest was over, the Swordmaster vanished. Instead of waking as he usually did, the boy found himself still in the dream landscape.

He stood at the foot of an almost symmetrical hill in that mystic, transitional time between sunset and dusk when the sky to the west was still streaked with light and colour. Bands of red and orange flamed behind the hill, illuminating the triple ring of standing stones that circled the summit of the hill like a diadem. Imposing menhirs arranged in an outer ring stood starkly black against the luminescent sky, crowned in pairs by massive lintels. The middle ring of stones bulked slightly smaller, gracefully joined all around by capstones, polished like jet to reflect the incandescent glow of the sky. The inner ring, standing alone without lintels, was not a ring at all, but a horseshoe enclosing a low altar stone.

Behind him loomed the vast, cone-shaped bulk of a mountain, taller than any of the other mountains in the soaring, crenellated ridge beyond it. He did not have to look at it to know it was there. In the dream, this place was familiar to him, known and welcoming. He knew all the rivers that gathered the waters of those mountains and drew them down to the distant eastern sea hundreds of leagues away.

He waited at the bottom of the mound, conscious of the weight of the longsword on his back. The air was warm yet and the fresh scent of crushed grass beneath his feet rose strongly around him. A breeze stirred gently and ruffled his hair, which glowed redly in the fading light of sunset. Casually, he lifted an unhurried hand to brush away a lock of hair that fell into his eyes.

A man appeared in the opening in the foot of the horseshoe, dwarfed by the giant stone dance. He came forward slowly to look down at the boy watching at the bottom of the hill. The boy could not see the man’s face, but knew he was not smiling. Giving the impression of great age and wisdom, the man stood quietly, erect as one of the menhirs, unmoving, watching the boy there at the foot of the mound, and the boy found himself transfixed by that piercing, distant gaze.

The man on the hill spoke. In spite of the great distance between them, the boy heard him clearly.

“So,” he said, his voice soft and welcoming. “You are mastering the sword I sent you.”

“It was always for you. I am glad you have awakened at last.”

The boy smiled. “No,” he replied, speaking as quietly as the man. “I am here only in a dream.”

“Of course,” the man said. “But in dreaming, you awaken.” He raised one hand. “The time will come when you will know.”

The last of the light faded, leaving the mound and the stone circle starkly silhouetted against the pale glimmer of the sky. As the boy turned to walk toward the black bulk of the cone-shaped mountain, the landscape began to disintegrate and disappear around him.

Part One — The Mouse
I

Mouse
awoke
in the dark, shivering in the crisp, damp chill that came only an hour or so before dawn along the coast of Falinor. Fragments of his dream drifted like mist through his head but as always, he could remember nothing of the shape and substance of it.

He held himself still through habit, listening carefully. It was too dark. Too quiet. He heard none of the familiar night sounds of other sleeping bodies close by, and a cold hook of apprehension clutched at his belly. Something was wrong.

The chamber where he lay smelled damp and musty with an overlying stench of decay. Cautiously, he rolled onto his side. Pain struck his whole body at once and he cried out with it. The bruises on his face and arms throbbed, and his left eye had swollen shut. The open cuts on his back left by the lash burned like the fury of Hellas. He fell back, gasping, to the cold stone floor. Nausea churned in his empty belly. He gagged and retched, then spit out a mouthful of bitter bile.

He shuddered as he remembered why he was there, naked and alone in the dark. He remembered what would happen to him when morning came. Tears stung his eyes. Impatiently, angry with himself, he lifted one hand to scrub them away. This was no time for tears. He was almost sixteen, and a man, and tears were not for a man.

He shivered again. Almost a man. After they finished with him in the morning, if he still lived, he would be no man at all, and no chance ever to become one.

And Rossah? Rossah, who had been meant as a gift to Lord Mendor’s son Drakon to mark his coming of age…

Sudden visions flashed through his mind. The gleeful intensity in the faces of the house-guards as they beat him… The hideous rapture on Drakon’s face as he bent over Rossah with the dagger in his hand… Bright blood splashing on pale straw…

Mouse bit his lip to suppress the cry that rose in his throat and he lurched to his knees. Agony scythed through his chest as the broken ends of a rib grated against each other.

He knelt there on the cold stones, chin on his chest, breathing in shallow gasps as he waited for the pain to subside. The urgent need for revenge formed under his heart. Anger grew in his belly, a hard knot of fury that pushed the pain and grief to one side.

He huddled into himself, concentrated on the cuts on his back, on the swollen bruises on his face, his chest, his thighs. There was a trick, or a gift, he had discovered by sheerest accident when he was a child. If he withdrew into a far corner of himself and focused on visualizing his hurts as whole and healthy again, the pain vanished and the injury healed itself. But the trick was not without cost. When it worked, it left him limp and drained and exhausted for a day or two, barely able to drag himself around to attend to his duties.

With relief, he found it worked this time. The stinging agony in his back and shoulders eased, the ache of the bruises faded. The swelling around his eye subsided and he was able to open it. The stabbing pain of the broken rib abated.