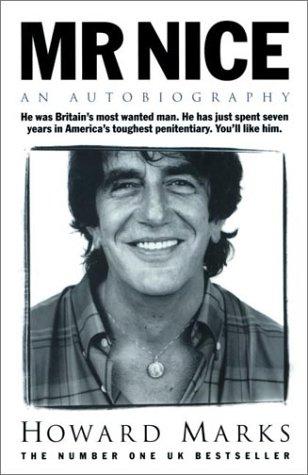 Howard Marks has asserted his right under the Copyright, Designs and Patents Act 1988 to be identified as the author of this work

First published in Great Britain by Martin Secker & Warburg in 1996

Printed and bound in Great Britain by [production to supply]

To my son, Patrick Marks

Howard Marks is an acclaimed travel and sports writer, TV personality, and DJ. For the last ten years he has had a series of successful one man shows. He lives in Europe and continues to campaign for the legalisation of marijuana.

I was running out of passports, ones I could use. In a few weeks I intended to visit San Francisco to pick up several hundred thousand dollars from someone keen to exploit his connections, both with me and with a bent US Customs Officer working in the imports section of San Francisco International Airport.

A few years earlier, I had been declared the most wanted man in Great Britain, a hashish smuggler with documented links to the Italian Mafia, the Brotherhood of Eternal Love, the IRA, and the British Secret Service. A new identity was vital. I’d already gone through about twenty different identities, most of which had been backed up by a passport, driving licence, or other indicators of documented existence, but they’d all either been discovered by friends/enemies or compromised by featuring in some suspicious trail meandering through a recent scam.

We drove to Norwich. After a couple of awkward meetings with go-betweens, I was introduced to a gentle guy named Donald. I couldn’t tell if he was a drinker, a stoner, or a straighter. His kitchen gave no clues. He looked normal, except that his eyes danced like those of a villain.

‘We can talk privately out here,’ he said and took me to a garden shed.

‘I need a passport, Don, one that’ll stand up to all checks.’

‘You can have mine. I won’t be needing one. But there’s one problem.’

Convicted murderers, although clearly people with a criminal record, would rarely be declared as unwelcome at a country’s borders. They were regarded as mere menaces to individuals rather than threats to the fabric of society. The latter attribute tended to be restricted to dope dealers and terrorists.

‘I’ll give you a grand for it,’ I said, ‘and a few hundred quid from time to time when I need more back-up.’

I was thinking of a driving licence, medical card, local library card. Just a passport with no supporting identification is suspicious. A membership card to the local billiards club, obtainable cheaply and without proof of identity, is enough to give the required credibility.

‘That’s the best deal I’ve ever been offered for anything.’

‘What’s your last name, Don?’ I asked. I’d been lumbered with some terrible ones in the past.

‘N-I-C-E, just like the place on the Riviera.’ It was up to Don how he pronounced his name. But I knew I would pronounce it differently. I was about to become Mr Nice.