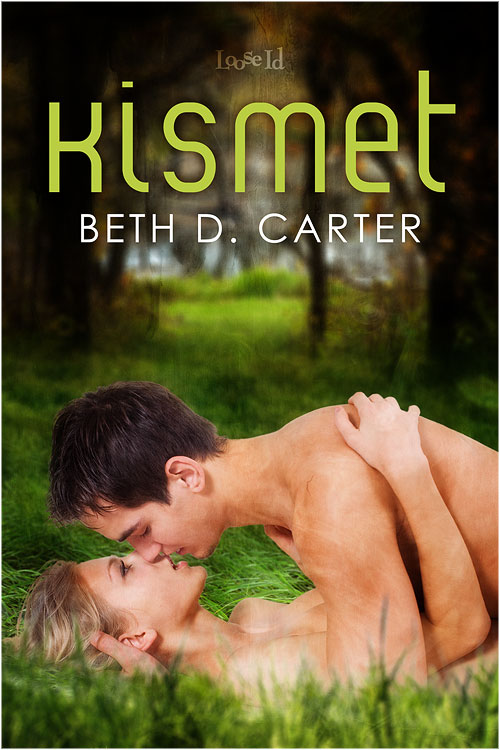 Every night when I sit down at my computer to write, my son comes up every few minutes asking if I’m done writing my book. He says he loves me and wants to play swords with me, to fight the bad guys and win. I don’t know what we’re winning, but how can I say no? We swashbuckle around the living room, he with his plastic sword and I with my wooden kitchen spoon. In my son’s eyes, it’s perfectly normal for Mommy to be writing a book, and that makes me very happy…because I’ve shown him that any dream can come true.

My deepest thanks to Rory Olsen, Jennifer B, April Martinez, and the whole Loose Id team for liking Evie enough to bring her to life. And thanks to my friends Perla, Andy, and Shalana. You guys rock.

The dream must have started right after I fell asleep, because one minute I’m listening to crickets singing, and the next I materialize in front of two men. But it’s all right because I know these men. I have dreamed of them my whole life.

I see their names on the crisp military uniforms they wear. There is
Galloway
, the one with reddish gold hair, eyes a deep forest green, and dimples every time he smiles. The other, who’s just a fraction taller and a tad broader through the shoulders, has the name
Seek
sewn above his heart. He has dark hair and equally dark eyes, and through my dreams I’ve come to know that his personality is the complete opposite of his partner’s. One man is outgoing, flirtatious, with a devil-may-care grin he uses to great advantage. The other is quiet, controlled, almost subdued.

As I walk toward them, Seek turns his face from me and vanishes. At first I’m startled, unsure, but Galloway holds out his hand, and without thought I take it, feeling confused and disoriented because I am not used to dreams where I am the one being manipulated. He brings me in close, enfolding me. He’s so big and tall that he practically wraps around me.

“Save him,” he whispers in my ear.

It takes me a few minutes to realize what he said, because I’m still trying to get my bearings in this unusual dream. Usually the men never talk to me.

“Save who?” I pull away, and I feel his arms drop from my body. The heat he generated dissipates, and I shiver at the loss. His green eyes are staring at me with such sadness my heart almost stops.

“He will die unless you reach him in time.”

Those words are ice in my veins. I reach out again, intent on keeping him with me and finding out more, but he’s fading. Actually, he’s melting before my eyes. Literally. His skin starts to bubble and boil, peeling away layer by layer, until he’s nothing but a skeleton turning to ash. I scream so long and so loud that my throat turns raw. I don’t know what to do. I am helpless as I watch him disintegrate.

And then he’s gone, and I realize that I am standing in the center of some city. It’s night, and I’m all alone on the deserted streets. My screams die off as I turn in a circle, trying to find something that will give me a clue as to where I am. Street signs tell me I’m standing on the corner of North Main and West First, not exactly pinpoint locations since every fucking city in the United States has—had—them both.

I take a chance and start running, suddenly realizing that my clothes have changed. Instead of my standard black pants and shirt ensemble, I am dressed in a flowing white gown. I frown, wondering what part of my psyche is so damaged that it puts me in a damsel-in-distress dress.

But no sooner had that little thought zoomed into my brain when my eyes catch another street sign. I bring my dash to a halt, panting slightly, frowning when I read the words NORTH LOS ANGELES STREET.

Fuck. This is not a city I want to be in. A once great and powerful metropolis, now it’s nothing more than a lost civilization of anarchy and turmoil. A person would have to be certifiable to even consider going into LA.

I spot a lone figure standing on the sidewalk staring at me. I flinch and reach for my gun, which isn’t there thanks to my dress. As I ponder how I’m going to handle the man, he turns slightly, and I recognize the military uniform.

Breathing a little easier, I walk toward him, and in the twilight, I see it’s not Galloway. Seek’s tanned face is contorted with anguish.

“Seek?” I ask, trying to grab his hand, which dangles at his side. But he has become nothing more than mist. “What’s happening? Where’s Galloway?”

“Save him,” he says, eerily repeating the exact words that Galloway had spoken to me earlier. The solitary tear running down his cheek crystallizes on the frozen vapor that is Seek’s skin.

And then the eruption of gunfire surrounds us. I duck and reach for Seek, but he falls back, eyes open wide and unseeing. Smoke wafts from the bullet hole in his forehead.

Before my brain can process what has happened, the ground beneath my feet starts shaking. I am violently flung down, and it is impossible to stand. Buildings shake apart; trees topple over. The earth cracks, and I feel the heat of hell rise up, burning me alive. I can feel my skin blister as my body catches fire.

Again, the screams pour out of me, jarring me awake, and the lingering taste of inhaled smoke is sharp upon my tongue. The terror I’ve just lived through forces me to crawl out of my little tent and run to a nearby tree where I vomit bile.

After I’ve managed to steady my heaving stomach, I scuttle backward until my backside hits the tree base. It is still night, but I know I won’t be able to sleep anymore. Born with the nightmare is an urgency I’ve never felt before. Fear grips me deep down as ice freezes my soul.

I need to get to LA.

My Ice Cat four-wheeler crosses the invisible line separating Arizona and California, and no sooner have my tires spun upon the sand-coated freeway than a vision dances through my mind.

It’s of a woman, short and tired looking, with a really bad dye job in her straw-dry hair. She stands in front of a restaurant, waiting for her ride, when a truck pulls up next to her with two men inside the cab. They talk, though I can’t hear what they say, and then the passenger opens his door and grabs her. She gives a silent scream, and the vision dies away. The scene is replaced with her face as a death mask over my mind.

I sigh as the vision starts over, repeating frame by frame, only softer now like a memory. Not quite as sharp or as pungent as the original, but there nonetheless.

My visions are, unfortunately, selective. I am not able to pick or choose who or what I see. I wish I could, because life would be so much easier if I were able to direct my premonitions. Instead, I get maybe a half hour’s warning of what is to be. They come in a flash, can be heightened by touch, and most of the time leave me frustrated.

The vision starts to repeat faster as I near a hole-in-the-wall town called Badlupa. My instinct warns me this place is aptly named, but I have to ignore my unflinching intuition, even though I would love nothing more than to hightail it down the interstate. The wind blows hot, and the sun is bright, even through my sunglasses. I exit at the ramp and take note of the chain-link fence running alongside, making the impression of a prison that much stronger.

Badlupa is a pissant little place, a blip on a map, built around travelers crisscrossing Interstate 40. But since the virus ravaged through the human population, no one really goes anywhere anymore, thus forcing small communities like Badlupa to become almost lawless. God, it’s like going back to the Wild West, except the only horses around are those under the hoods of cars.

The world hadn’t been ready for the biological weapon that North Korea had launched into the atmosphere. The poison gas spread like wildfire, and when the virus had run its course, what remained was a world trying to pick up the pieces. What I realized in my traveling was that most people decided to isolate themselves in fear of either contracting the disease or becoming prey to those who didn’t. The United States still has a president though he ran it with a militaristic system of government, but most left behind migrated into cities where food was more prevalent and protection readily available. Places like Badlupa still exist because some people can never leave their comfort zones and head into the unknown.

The unknown can get you killed.

I drive my four-wheeler down the one street that makes up all of Badlupa. I see trailers and several run-down houses, a dried-up gas station, a forgotten hotel whose windows are busted, and the restaurant from my vision. Of course, all the broken dwellings remind me of my own little troublesome hometown. For a moment, I can almost hear the echo of my stepdad calling me.

“
Eva-Ann Florence Rhoton! Get your ass inside, girl, before I bust it
!”

I hated that man even more than I hate my full name. But my past is about a million miles away from me, both in distance and in my heart, and just as I couldn’t wait to shake off that South Louisiana stymie, now I can’t wait for Badlupa to be in my rearview mirror.

An Inheritance of Ashes by Leah Bobet
A Man to Remember by Engels, Mary Tate
Word & Void 02 - A Knight of the Word by Terry Brooks
Angels by Denis Johnson
Zodiac Station by Tom Harper
Blood Wicked by Sharon Page
Smoke and Mirrors by Elly Griffiths
Small Town Doctor by Dobson, Marissa
The Eleventh Man by Ivan Doig
The Reluctant Texas Rancher (Harlequin American Romance) by Thacker, Cathy Gillen
Our partner