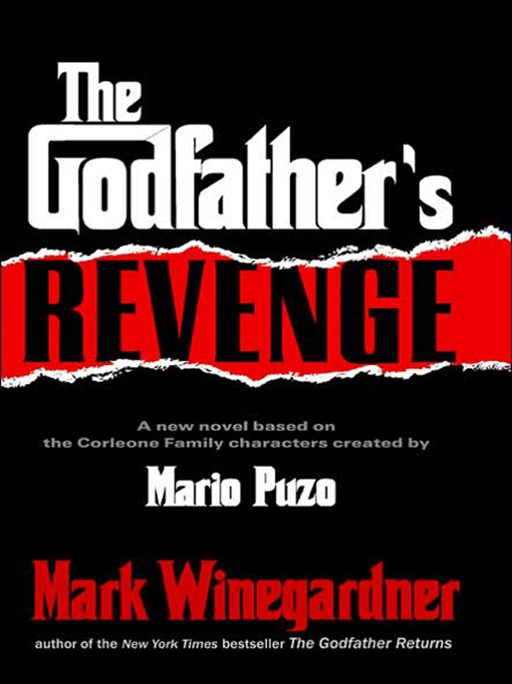 “Some of us have been living with the
Godfather
mythology for thirty-seven years now. The late Mario Puzo’s 1969 bestseller shocked the nation with its explosive mix of sex, violence, and profound cynicism. The new novel,
The Godfather’s Revenge
…[is] a big, ambitious book…deftly handled and deeply ironic. Winegardner packs a great deal of mob lore into the novel…plenty of action…[and] smart talk.
The Godfather’s Revenge
is popular fiction at its best and arguably offers more depth and realism than Puzo’s original.”

“Re-creating Puzo’s embroidered Mafia universe can be entertaining, and Winegardner has rich (in every sense of the word) material to work with.”

“Keeps the action moving, the plentiful sex and violence scenes have that
Police Gazette
swagger, and in the end it may be even more fun, thanks to its deliberate excess and sly asides. Like Puzo, Winegardner paints real-life characters in far darker colors than their public images.”

“A corker. [Winegardner’s] created a plot that cleverly encircles and amplifies the existing tale.”

“Faux Kennedy brothers, elaborate detailings of byzantine Cosa Nostra politics, steamy pulp-fiction prose, a hot murder mystery, and [an]…epic cast make this
Godfather
installment a worthy addition to the chronicle of
la famiglia
Corleone. Winegardner breathlessly reanimates these archetypes even more effectively than he did in
The Godfather Returns.
[His] deft plot-spinning is rivaled only by his sure grasp of Goodfella mise-en-scène, the profanity-laced witticisms, the fashion fetishizing, the cool, long, dark sixties Chevy Biscaynes. Minor characters, from upstart Eddie Paradise to the musically monickered Ottilio Cuneo and Osvaldo Atobello, add varnish to inch-thick operatic mobster atmosphere. Bloody and bombastic—a top-notch addition to the saga.”

Further Praise for the Novels
of Mark Winegardner

“Shows a hard-eyed love of human drama—sad, ridiculous, and lovely.”

“Both an intimate and a sweeping scale. But [Winegardner’s] main achievement is a narrative voice…that’s distinctly his own.”

“An ambitious novel…. Like Jonathan Franzen in
The Twenty-Seventh City,
or E. L. Doctorow in
City of God,
Winegardner takes on the American metropolis…in plain, straightforward prose.”

“Playful and vivid…a crafty mix of the real and imaginary.”

“A grand piece of historical fiction recalling E. L. Doctorow and, more recently, Don DeLillo. Winegardner is a lively writer who holds the reader’s interest throughout his long epic. A remarkable and entertaining book.”

Copyright © The Estate of Mario Puzo, 2006
All rights reserved

PUBLISHER’S NOTE
This is a work of fiction. Names, characters, places, and incidents either are the product of the author’s imagination or are used fictitiously, and any resemblance to actual persons, living or dead, business establishments, events, or locales is entirely coincidental.
The publisher does not have any control over and does not assume any responsibility for author or third-party Web sites or their content.

Men must either be flattered or crushed, for they will revenge themselves for slight wrongs, while grave ones they cannot. The injury, therefore, that you do a man should be such that you need not fear for revenge.

Theresa Hagen: Tom’s wife and mother of their four children

Michael Corleone: Vito’s youngest son and the reigning Godfather of the Corleone Family

THE CORLEONE FAMILY ORGANIZATION (circa 1963)

In 1955, merged with Nick Geraci’s
regime
(started by Sonny Corleone)

Other Significant Made Members of the Family

MEMBERS OF THE COMMISSION, LA COSA NOSTRA’S RULING BODY
(circa 1963; years on the Commission are in parentheses)

The Five Families of New York

Ottilio “Leo the Milkman” Cuneo (1931–), boss of the Cuneo Family Charter member of the Commission

Charter member of the Commission

Charter member of the Commission

OTHER ASSOCIATES, FRIENDS, AND BUSINESS PARTNERS

Ben “the Phantom” Tamarkin: attorney and fixer for the Jewish syndicate, aka the “Kosher Nostra”