“Kit’s voice has a startling clarity and authenticity …
Kit’s Law
is a great read, an affecting, haunting, memorable tale told by a true, effortless storyteller.”

“Donna Morrissey has created in
Kit’s Law
an extraordinary trinity of women, and charted for our vast entertainment their piquant and heroic adjustments in relation to those who have power in Newfoundland’s Haire’s Hollow—men such as the starchy Reverend Ropson, his son Sid, the local doctor, and the murdering, raping jailbird Shine. Comparisons to Annie Proulx are inevitable, but
Kit’s Law
exists in a valley of its own saying, and in the directness of its tone, establishes its own authority.”

“[
Kit’s Law
] pursues its homage to melodrama to a beautifully structured resolution that speaks directly to the heart.”

—
The Globe and Mail

“Kit Pitman … is an unforgettable character … Shy but tough … Kit will leave an indelible impression with the reader … No character is a cardboard cutout. All are flesh, emotions, difficulties and triumphs … A stunning debut novel from a very talented writer.”

“Like a twentieth century Brontë sister, Morrissey indulges in the full spectrum of passion and tragedy, sin and redemption, despair and impossible optimism … [
Kit’s Law
] makes for a helluva good read.”

“A Dickensian brawl of a novel … never a dull moment! The reader is willingly swept along in the tide.”

“A fast-paced charmer of a yarn.”

“Morrissey knows of what she writes … a lively narrative with an unquestionable sense of authenticity.”

“Donna Morrissey’s novel,
Kit’s Law
, lures you in with a soft, poetic beginning, then wrenches you into the harsh realities of life for 14-year-old Kit Pitman, who lives in an isolated Newfoundland outport. Morrissey understands the music of the language here … The novel carries a potent emotional impact that stays with you long after you walk away from the story … a wonderful addition to the great canon of Newfoundland literature.”

“
Kit’s Law
has those timeless, mythic qualities you find in Hardy. Donna Morrissey takes the old and makes it new in a miraculous way. As do all good novels.”

—Eric McCormack, author of
The First Blast of the Trumpet Against the Monstrous Regiment of Women

“
Kit’s Law
is a wonderful book. I love the sense of place and the vividly described people who inhabit Haire’s Hollow. Donna Morrissey has managed an intriguing plot-line in addition to characters, sounds and passions that light up the book so marvellously. The end brought a sense of peace to this emotionally fraught story. After holding my breath right through it was a relief to be able to exhale.”

“There’s a sense in Morrissey’s writing that William Faulkner has met Annie Proulx … If her first novel is anything to go by, Morrissey is almost certain to set new boundaries in fiction in Canada.”

“Kit is a heroine whom we immediately warm to …
Kit’s Law
is a charmer.”

“[A] beautiful first novel … With a poet’s attention to sound, Morrissey combines wonderful, rich characters and compelling family intrigue with a powerful, almost meditative sense of place. Startling, vivid, and expertly crafted, this novel introduces an exciting writer whose career needs to be followed closely.”

“Morrissey has crafted an incredible debut novel … Impossible to put down.”

“
Kit’s Law
offers the reader all the old-fashioned virtues: a vivid sense of place, larger-than-life characters, an intricate and suspenseful plot and a feisty heroine we can’t help rooting for on every page. Donna Morrissey has written a terrific novel.”

“Suffused with a wonder for the natural world like Thomas Hardy’s, and the tart forthrightness of Marilynne Robinson, this atmospheric coming-of-age story marks the promising debut of Canadian screen-writer Donna Morrissey … Like her beloved grandmother, Kit is valiant and impulsive, but most fetching is her voice: whether describing Josie’s ‘smell of rotting dogberries’ or the big Newfoundland skies, which Morrissey captures with thrilling verve and precision.”

DONNA MORRISSEY
is the award-winning author of four novels,
Kit’s Law, Downhill Chance, Sylvanus Now
, and
What They Wanted
, all set in Newfoundland and all subsequently translated into several languages.
Kit’s Law
won the CBA Libris Award, the Winifred Holtby Prize, and the American Library Association’s Alex Award. Both
Downhill Chance
and
Sylvanus Now
won the Thomas Head Raddall Atlantic Fiction Prize, and
Sylvanus Now
was the winner of the Atlantic Independent Booksellers Choice Award. Her screenplay,
Clothesline Patch
, won a Gemini Award. Morrissey grew up in The Beaches, a small fishing outport in Newfoundland, and now lives in Halifax.

Published in this edition, 2009

To my mom and dad, Claudine and Enerchius Osmond, who loved me.

For their love and kindness during the writing of this book, I would like to thank my publisher, Cynthia Good, and my agent, Beverly Slopen, Michael Chadwick, Ann Kilcher, Lori Maruk and, most especially, my esteemed mentor, Mrs. Dianne Senechal. 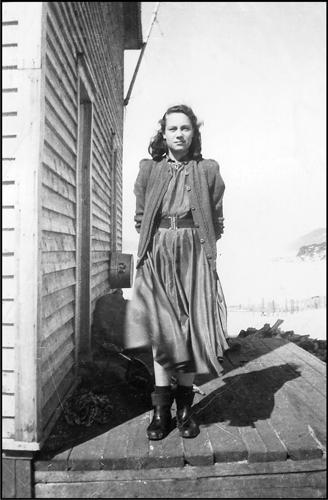 I
F YOU WERE TO PERCH ON A TREETOP
and look down on Fox Cove, you would see a gully, about twenty feet across and with a brook gurgling down its spine to the seashore below and flanked on either side by a sea of rippling grass, cresting with Queen Anne’s lace, and scented with a brew of burning birch, wet ground and kelp.

To the right of the gully, and about a hundred yards down from a dirt road, is a grey, weatherbeaten house, its windows opened to the sea, and its walls slanted back, as if beaten into the hillside by the easterly winds gusting off the Atlantic and whistling up the gully’s channel. And if you were to hop onto a windowsill and look inside that house, you would see three women. The eldest sits in a rocker by a fire-blistering wood stove, her iron-grey hair hanging down around her fat-padded shoulders, and a pinched look on her wrinkled old face as she sucks on something sharp. Standing behind her, drawing a comb through the grey tresses, is another, younger, with flaming red hair, a furrow deepening her brow, and her tongue nipped betwixt her teeth as she clumsily attempts to gather the old woman’s hair into a bun and fit it into a hairnet that she dangles from one finger. Sprawled across the daybed and watching the two is me, the youngest, with fine yellow hair falling away from my forehead, and a smile, I imagine, rounding the curve of my cheek as I watch.

Rise of the Mages (Rise of the Mages 2) by Foster, Brian W.
Time Past by Maxine McArthur
Love Me If You Must by Nicole Young
The Monogram Murders by Sophie Hannah
Elemental by Antony John
The Legendary Playboy Surgeon by Alison Roberts
Feud by Lady Grace Cavendish
Exiled: Clan of the Claw, Book One by S.M. Stirling, Harry Turtledove, Jody Lynn Nye, John Ringo, Michael Z. Williamson
Lizzie Zipmouth by Jacqueline Wilson
Curiosity Didn't Kill the Cat by M. K. Wren
Our partner