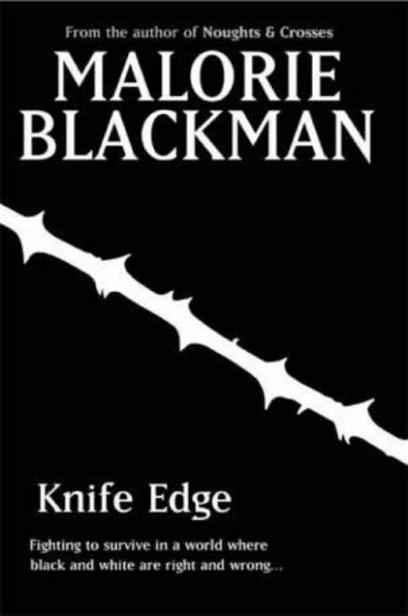 'A powerful story of race and prejudice'
Sunday Times

'Relentless in its pace and power . . . devastatingly powerful'
Guardian

'The eagerly awaited sequel to Malorie Blackman's
acclaimed novel,
Noughts & Crosses
. . . is every bit as
exciting and intelligently written as one would expect . . .
the novel is both moving and thought-provoking'
Observer

'Supercharged . . . the dislocation from reality lends her
writing an unsettling quality which keeps the reader
constantly alert and often uncomfortable'
Scottish Sunday Herald

'Written with passion . . . will appeal to teenagers who
want to understand grown-up emotions'
Sunday Times

'Fast-paced and full of incident'
TES

The right of Oneta Malorie Blackman to be identified as the Author of this work
has been asserted in accordance with the Copyright, Designs and Patents Act
1988

Addresses for companies within The Random House Group Limited
can be found at:
www.randomhouse.co.uk/offices.htm

This book is dedicated with love
to Neil and Elizabeth
Who bring every colour of the rainbow
And more besides.

And a big thank-you to everyone who asked,
'What happened next?'

He who binds himself to a joy
Does the winged life destroy;
But he who kisses the joy as it flies
Lives in eternity's sun rise.

BY
J
ON
G
RESHAM

Yesterday evening, a nought suicide bomber was shot dead as he entered Ackton Palace train station. He was found to be wearing a money belt packed with explosives. A police spokesman told the
Daily Shouter,
'We had a tip-off that this terrorist planned to board the next commuter train and detonate his bomb once the train was underway. As it was rush hour, the consequences would've been devastating. This is typical of the cowardly acts we've come to expect from the Liberation Militia.'

A nought eyewitness stated, 'Four plain-clothed police officers opened fire the moment the man stepped onto the station concourse. He didn't stand a chance. People were screaming and running. It was terrifying – like something out of a film.' But as a police spokesman was quick to point out, 'Make no mistake, had we shouted a warning or alerted the terrorist to our presence, he would've immediately detonated his bomb, maiming and killing goodness only knows how many people. Better one dead nought terrorist than the deaths of dozens of innocent people – including children.'

The Liberation Militia sent out a press release condemning the death of one of their members. 'This was nothing less than state-sanctioned murder. Our member wasn't even given the chance to surrender. Whilst these state atrocities continue, the war between Noughts and Crosses will never be over.'

Kamal Hadley, the Deputy Prime Minister gave his reaction to the outrage. 'These sub-human nought terrorists will never win. Their blatant disregard for life, be it nought or Cross, will ultimately be their undoing.'

Given the fact that Kamal Hadley's daughter, Persephone was kidnapped last year by the Liberation Militia and held for ransom, the Deputy Prime Minister's reaction showed remarkable restraint. Whilst a prisoner, Persephone Hadley was made pregnant by Callum McGregor, one of the nought terrorists who abducted her.

When Callum McGregor was hanged last year for kidnap and political terrorism, there was a
(continued on page 5)

Getting Back to Normal by Marilyn Levinson
Understood by Maya Banks
The Rise of Hastinapur by Sharath Komarraju
The Sunset Gang by Warren Adler
The Clown by Heinrich Boll
The 8-Hour Diet by David Zinczenko
The Cornish Heiress by Roberta Gellis
All I Want For Christmas by Julie Coffin
Deceived by Jerry B. Jenkins
Come Back to me:Short Story by Terry , Candice
Our partner