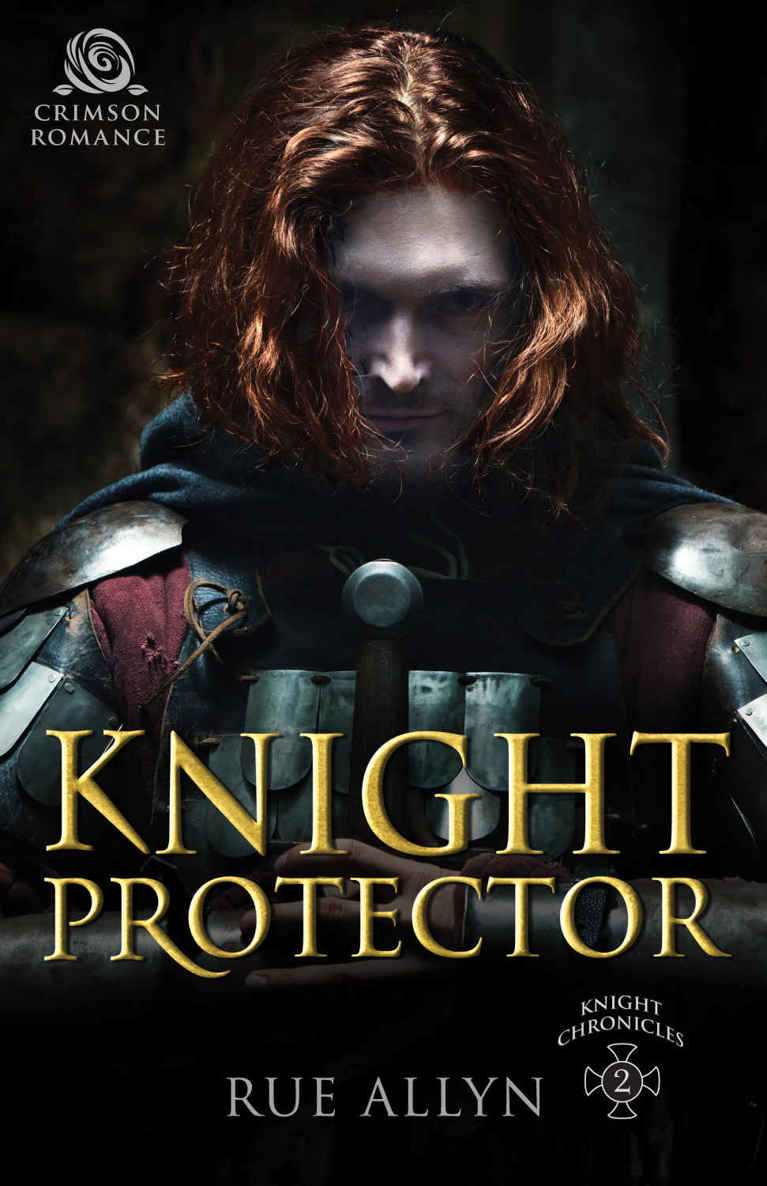 This book is dedicated to the ladies of MVRAI—you know who you are—you constantly inspire and motivate. Thank you!

Sir Colin Marr swallowed, then wiped sweaty palms on his breeches and approached the stone bench where sat the only woman who could tie his tongue in knots. He had long imagined finding Lady Sorcha alone within the walled herb garden of his home – her smile beaming, her Mackai gray eyes dancing with mischief and delight at his presence. But that was a fantasy. In reality, a quiet smile played on her lips, and her eyes were closed. She daydreamed he knew, nae of him but of his twin brother, Brice, while his father and her parents finished negotiating the betrothal pact for her marriage to his older twin.

Brice should have been with her, but the selfish whoreson had ridden off early to the nearest
tabhairn
. On this day of all days, neglecting Sorcha in order to carouse with drunkards and whores was the final straw. Of nearly one mind as lads, Brice had changed, trading their kinship for his own base needs, his own reknown—and to Colin’s way of thinking—for the power their temperamental father would cede to a son who “acted like a man.” Colin could nae sit by and see the woman he loved distressed, but neither could he bring himself to purposely destroy her present happiness.

Sorcha opened her eyes; her smile shone bright and warm, as if the stars had arranged themselves for a happiness that she near burst to share with all. It almost hurt that the smile would be the same for any man.

“Colin, my soon-to-be-brother, how good to see you. Come sit with me.” She patted the stone surface beside her and peered eagerly beyond him. “Did you bring Brice with you?”

“N-nay, my brother is otherwise occupied.” He winced inwardly. She always knew on sight which twin was which, yet she could never recognize Brice’s faults. The temptation to tell her of the cur’s faithlessness was strong. But he wanted to remember her happy and wouldna cause her tears. If he was lucky she’d grant him a kiss of peace to carry with him all his days.

“Then you have news of him?” Her smile did nae falter, but she sighed, gazing up at Colin.

Shaking his head, he sat next to her and took her hand. “I’ve nae come to speak of Brice but to say farewell.”

Above her smile her brows quirked. “I dinna understand. Brice wishes to speak our vows here at Strathnaver. Surely you will stay for the wedding. ’Tis only a few weeks off, though I wish it were tomorrow, or better yet today.” She nearly bounced with excitement.

His heart hurt. He delighted in seeing her so happy, so in love, but that love was nae for him. He must stay firm in his decision. “I regret I canna linger. An opportunity has come for me to pursue life as a knight errant, and I must take it.”

A momentary moue of disappointment claimed her features before her bright joy returned. She squeezed his hand. “I am happy for you, but are you certain you must depart now?”

“Aye. King Alexander has requested a knight from each clan to accompany him on a diplomatic mission. ’Tis believed he plans to wed Lady Yoland of Dreux, Montfort’s daughter. Brice canna go, nor would our father miss his heir’s wedding. Hence I am chosen to represent the family and clan.” Colin saw the message from the king as a sign that ’twas time he left, to seek his fortune and give his brother and Sorcha the chance to settle into marriage. Eventually the longing for Sorcha would fade, he hoped. Then he might return and be happy to see her surrounded by Brice’s children. When she was a mother, likely she wouldna mind her husband’s infidelity and drunkenness so much.

“’Tis an honor for you, but I am sorry you must miss the wedding.”

“’Twill nae be the same at Strathnaver without you.”

“Brice will fill all your time. You’ll have nae a moment to miss me.”

She blinked at him. “I hope I will be busy. I could never be happy to miss you. I can talk to you, and I’m nae so sure Brice shares my understanding of what our marriage will be.”

Was she starting to have doubts?
Shall I stay to see if the betrothal fails, and if so, be her comfort in hope she will turn to me?
He shook his head inwardly. Nae, if she didna love him now, she wouldna in the future. “’Tis normal to feel so. But I believe those feelings will disappear once you are wed.”

“Thank you. I will miss your comforting counsel.”

“You have greater blessings than my puir words, so I would beg a boon of you.” He wanted her to believe that he was truly happy for her. And he was. It was just … Better nae put too much into precise thought, lest he speak his mind.

“Anything for my brother in marriage.”

“Regardless of my hopes, I may no be able to return for some time,” he hedged, unable to admit even to himself how much he regretted leaving. If only she wasna wedding Brice. “Please, I beg you, grant me a kiss of peace to bless my travels?”

“Of course. When Brice and I are wed, I’ll have the Strathnaver priest say masses for you every week, as well.”

“Thank you.” He stood, pulling her up with him.

She tilted her face, and he lowered his mouth to hers.

He intended only the lightest brush of lips, but she lifted herself onto her toes in the same moment, and her soft flesh yielded beneath the added pressure. She opened, and impulsively, he took the chance to taste her, to lick and savor her sweetness.

Her arms went around his neck, and she answered his advance with an artless passion that he wanted to believe came from her heart. She trembled against him. He embraced her, crushing her breasts to his chest. Her tongue’s small forays tantalized him. Desire raced in his heart, and his head swam.
Could she love me
? How could that be? He dinna know, but he would share this joy with her for as long as heaven allowed.

Moving with great care, he lifted his head, released Sorcha, and guided her behind him.

Evidently that kiss had caught her too greatly for her to notice Brice or the dagger her betrothed held to the soft flesh just below Colin’s earlobe.

“Sit.” Gently he urged her toward the bench before easing one sidestep away from the dagger point. “Brice is here.”

She stood fast and stared at his twin, blinking rapidly while she stroked her braid.

Her features trembled. Was she as confused as he by what should have been an innocent kiss of peace, to say nothing of being discovered by Brice?

“Go inside, Sorcha. Colin and I must talk.” Brice’s eyes blazed and remained locked on his twin.

From the corner of his eye Colin saw Sorcha pale. Her frame shook, from fear or determination, he could not tell.

“Nae! You’ll nae push me aside so the two of you can brawl like bulls over a heifer.”

The denial came out with more force than he expected. But Sorcha had ever been a stubborn girl, and Colin wasna too surprised.

Brice’s fury spilled over onto his intended. He swung to backhand her. Colin leapt to stop him. The dagger sliced Colin’s upper arm, and the wound forced him backward.

“Bitch, you’ll pay for that.” he screamed and slashed at her.

Colin stuck out a foot, tripping his brother. Brice teetered. One arm pinwheeled. The other hand anchored itself on Colin’s wounded bicep.

Pain dropped him to his knees. Brice fell with him.

Empty hands reached for Colin’s neck. Grappling, they rolled and came to a bone- crunching stop against the foot of the stone bench with Colin on top, one arm raised to strike. Sweat blinded him, but he released his grip on a motionless Brice.

“What have you done?” An unexpected body blow knocked Colin away from his brother. “You’ve killed him!”

Colin blinked where he lay then wiped perspiration from his eyes with a torn, bloody sleeve while he regained his breath. “Huh? What do you mean? All I did was defend you. He tried to hit you.”

“And I hit him. ’Twas a mere misunderstanding.”

He scrambled to his feet, staring dumbfounded at the scene on the ground before him.

Pale as death, his head covered with blood still flowing from a wound at his temple, Brice lay cradled in Sorcha’s lap.

Sorcha pressed kisses to his face as she wept.

“Sweet Mother Mary, Queen of Heaven, help us. Brice, you’ll nae die, do you hear me? I’ll nae have it. Fiend take it, wake up.” Finally she ceased weeping and lifted her gaze to Colin.

“Brute! I pray that wound he gave you festers and scars so all will know you are marked like Cain.”

“Nae.” She howled then clasped Brice tighter to her bosom. “You’ll nae touch him. I’ll hate you forever. I will see you hunted down, drawn and quartered for this treachery.”

Her screams rained down like blows; Colin stumbled backward. “But I didn’t . . .”

“You did!” She looked wildly about, scrabbled with one hand in the dirt beneath the bench, and gripping Brice’s dagger, raised it accusingly above him. “Come one step nearer, and I’ll gut you myself.”

Colin kept moving, uncaring, unknowing of where he went.
What have I done
? Was Brice truly dead? If so it was an accident caused by the fool’s own drunkenness. Colin dinna approve of his brother’s choices, actions, and beliefs. Regardless, the man was still his brother. His selfish lout of a brother who had everything Colin would never have and took scant care of any of it, especially Sorcha’s love. But even that was nae cause for murder.

He bumped into a wall and found himself in the stables. Drunk or sober, their father was as volatile as Brice. It might be best to leave until time cooled hot tempers and the earl was willing to listen. ’
Twill allow me to find the best words to explain this disaster, once I figure it out for myself
.”

Dagon's Ride [Brac Pack 19] by Lynn Hagen
Deep Water by Corris, Peter
I Loved, I Lost, I Made Spaghetti by Giulia Melucci
When the Bough Breaks by Connie Monk
Silks by Dick Francis, FELIX FRANCIS
El cura de Tours by Honoré de Balzac
The Sound of Sleigh Bells by Cindy Woodsmall
Innocent Prey (A Brown and de Luca Novel) by Maggie Shayne
Death in Tuscany by Michele Giuttari
The Silver Chain by Primula Bond
Our partner