Read You're Never Weird on the Internet (Almost) Online

You're Never Weird on the Internet (Almost) 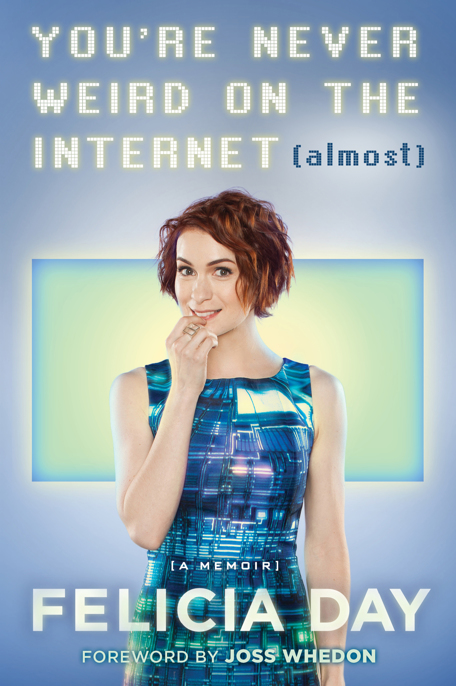 Praise for
You’re Never Weird on the Internet (Almost)

“It’s hard to keep up with Felicia Day. She’s an actress, a gamer, a screenwriter, a songwriter, a producer, a director, a webmaster, a costumer, and queen of the geek girls. It’s hard to imagine where such a prodigy could have come from. Wonder no longer. Felicia tells all . . . well, most . . . well, some . . . in her new book. Reading this is like sitting down and having dinner with her, and hearing the story of her life between the clam chowder and the cheesecake. I can’t imagine a more charming or amusing dinner companion. Felicia is a lot of fun, and so is her book.”

“I came for the delightful snark, I stayed for the disarming frankness and the hard-won insights about the internet—Felicia Day uses the internet to distribute entertainment, but she understands that it’s really there to be the nervous system of the twenty-first century.”

“Math nerd defies physics! Felicia Day, who is woven from moonbeams, has written a book that seems lighter than air but that ends up punching you firmly in the emotions. Felicia lays out a hilarious tale of how her unique upbringing, eclectic skill set, and killer work ethic led to
The Guild
, one of the pioneering works of online creativity. In the process, she pulls you inside her delicate skull, so that the final moving chapters aren’t as much read as they are experienced. An excellent book.”

— Jane Espenson, writer for
Buffy the Vampire Slayer
,
Once Upon a Time
, and
Husbands

“Felicia Day gives us an achingly funny, honest, open look at being ‘situationally famous’ (I love that phrase), plus the vital art of finding your creative joy, and weathering the storms that follow. It’s a wonderful book. Buy it before I grab all the copies.”

Thank you for downloading this Touchstone eBook.

2.
What Avatar Should I Be?

4.
Hollywood: Not a Meritocracy?

6.
The Guild: A Ruthless Beginning

8.
WE MADE SOMETHING! #lookit

10.
The Deletion of Myself

For my mom, who is kooky and unique and taught me to be both those things and more. Even though my childhood wasn’t “normal,” she did her best to help me become who I am, and I love her for it.

There’s about twelve guys in very fine suits, scratching their heads. I’m in a boardroom at a major Hollywood talent agency, having just presented my internet musical,
Dr. Horrible’s Sing-Along Blog
. With me are the other writers: my brother Jed, my sister-in-law Maurissa, my brother Zack, and Felicia Day. Though we’ve created the piece, we have no clearer idea of what to do with it, how to actually put it on the internet, than these fine-suited minds do. They hem and we haw. Their resident internet expert suggests tentatively that we could maybe put it on YouTube—but only if we cut it up into three-minute bits, because no one watches more than three minutes of anything.

Which is when the redhead pipes up.

I’ve asked Felicia to come because I know she’s internet savvy; her series,
The Guild
, was a guidepost for me in mounting
Dr. Horrible
. I’ve sat with her, a couple of times, to learn about how it all works. I know she knows her stuff, but it’s still a surprise and a delight to hear her take the conversation and just run with it, own it, slam-dunk it, knock it out of the park—. She sports-metaphors the
shit
out of that meeting. Talks rings around all of us, experts included:
This site has the bandwidth but not the views; this one requires a fee; yes we could go here and charge up front but we’d be compromising the ethos of the endeavor . . . .
I’m practically glowing, watching this girl, who looks all of fourteen, school a roomful of Professional Agent-Men and I realize, oh, of course: I’m having a
Buffy
moment. They never saw her coming.

I have personal heroes, and Felicia Day is one of them. She’s kind and loyal and funny and weird—but that describes a lot of my friends.
She’s pretty and I want to touch her hair—but that describes, sadly, almost
all
of my friends, including the lads. But Felicia has something few of us do. She’s fierce. She’s more than a self-made woman—I sometimes think she’s
not
a human woman, that she willed herself into existence, before willing the world to make a place for this new, unfathomable creation. Felicia is stronger than I am, and stranger than I am, and she double-majored in math and violin (which she felt compelled to tell me within five minutes of meeting me). I love her for all these things. I love this book because it relates, hilariously and occasionally harrowingly, how she came—or brought herself—to
be
this singular (though double-majored) creature.

It’s hard being weird. No—it’s hard living in a culture that makes it hard. This book deals with hard—without rancor, without the ugly flush of one-upmanship. Felicia created a persona of the bewildered waif who somehow manages to manage (and occasionally triumph). That persona is a gloss on a similar, but more painful, reality. Her odd, compelling journey was more difficult than a lot of us who knew her knew. But that’s part of her gift: she makes crippling anxiety look easy.

Another part of her gift is that she’s damn funny. Even if she’d come from the heart of normcore, her tale would be worth telling and well told. But she was raised in Crazytown, and the more foreign her territory, the more delightful—and somehow more relatable—her tale becomes. Reading this book is like spending an afternoon with Felicia, hearing breathless tales (they’re always breathless—Felicia doesn’t pause when she talks) of achievement, despair, and dazzling, almost transcendent nerdiness. This is the story of someone who found her place in a corner of the world that
literally
didn’t exist till just before she showed up. Felicia’s place is always off the edge of the map, where dragons wait, and this story is more than a memoir. It’s a quest. If you wanna survive, stay close to the redhead.

She knows her way.

Whereby I introduce myself to people who have no idea who the hell I am, but have found themselves in possession of this book. Welcome, stranger!

I recently experienced the perfect summary of my career at a Build-A-Bear store inside a suburban mall in Lancaster, California.

Okay, sure, a single adult woman in her thirties with no children might not necessarily pick that as the
first
place to kill an hour of her life. But I’d never been inside one before, and I’d already spent twenty minutes outside like a creepster, watching actual legitimate customers (mostly toddlers) go inside and, like modern-day demigods, craft the companion of their dreams. At a certain point, after eating two Auntie Anne’s pretzels, I decided to throw off the societal yoke of judgment.

Get in there, Felicia! Build yourself a stuffed friend. No one’s around to witness your weakness!

So I entered, told the saleswoman I was browsing for “a nephew,” and proceeded to spend forty-five minutes trying to decide what design to get. My mom wasn’t there, so I could take as long as I wanted. Unfortunately.

There was a six-legged octopus that almost took my heart, but
after much agonizing, I settled on a stuffed Santa Claus. Because it was July, and a stuffed old man doll seemed more ironic. (The hipster attitude helped get me over the shame that I was buying a
STUFFED ANIMAL FOR MYSELF
.)

I moved on to the accessories aisle to dress my Santa. And proceeded to have a small panic attack. Because my impulse was to dress him in a flouncy pink tutu, but it was a small town and I didn’t know if it would offend the saleswoman to make Santa a cross-dresser. But then I thought a liberal stance on the issue might, in a small way, help promote transgender rights in the area . . . when I turned to see four hip girls standing at the end of the aisle. Staring at me.

I overcame my social anxiety about people I don’t know turning their faces toward me and waved. “Heyo!”

They waved back simultaneously, standing in a clump together, four feet away. Practically a gang. (Not really.)

I wanted to smile back but stopped myself. I had to check something first. “Uh, who do you think I am exactly?”

“Yes! That’s me! Nice to meet you!” I always double-check where people think they know me from, because one time at San Diego Comic-Con, a guy bought four DVDs of my web show from me, and as I ran his credit card, he said, “My wife is going to love this gift. You’re her favorite actress. She adored you in
The Devil Wears Prada
!”

The girls crowded toward me. “We work at Hot Topic next door!
Steph recognized you when you were standing outside at the benches FOREVER.”

So much for anonymity at the Lancaster Build-A-Bear.

“Uh, yeah! I couldn’t decide if I wanted to come in here or not. Most people my age don’t buy things here for themselves, right?” I laughed awkwardly, waiting for them to reassure me.

Moving on. “Nice to meet all of you. Did you guys want to take a picture or something?” They were brandishing their cell phones like an extremely amiable group of paparazzi.

“Yes!” “Sure!” “Thanks!” All four of them clustered around me, trying to get simultaneous selfies, like a six-armed octopus of their own, as a mother and child approached.

“I can take those pictures for you.” The mother gathered all the phones as she stared at me. “Are you an actress?”

“Uh, kinda. And a producer and writer. More of that lately, to be honest.” She stared at me blankly. “Yes, I’m an actress.”

“Are you in the movies?”

“Nope. No movies.” I wanted to make it abundantly clear to everyone in the Lancaster mall area that I was NOT Emily Blunt.

One of the Hot Topic chicks piped up. “She does tons of internet stuff!”

One of them leaned in slightly too close. “I love you on
Supernatural
.”

She smelled like cherry ChapStick. I liked it. “Thank you.”

The mother was confused.

“Is that a TV show? I don’t watch it. But I love
Law & Order: SVU
.”
The woman called over to her eight-year-old. “Jenna, baby, do you recognize this lady?”

The kid stopped poking through a collection of pastel princess outfits to look me up and down in a surly way.