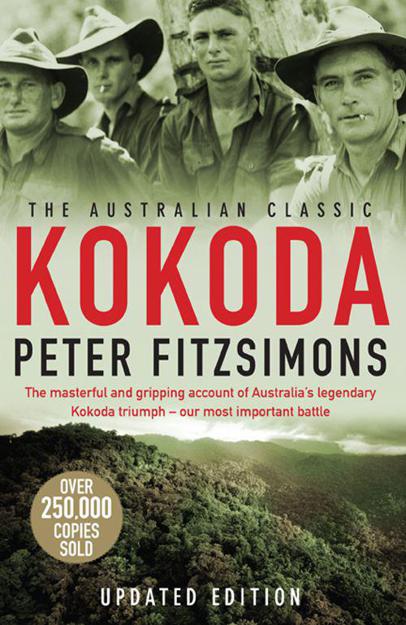 ‘The Australians who served here in Papua New Guinea fought and died, not for defence of the old world, but the new world. Their world.

They died in defence of Australia and the civilisation and values which had grown up there. That is why it might be said that, for Australians, the battles in Papua New Guinea were the most important ever fought.’

Everyone But Phar Lap

Everyone And Phar Lap

Nancy Wake: A Biography of Our Greatest War Heroine

The Story of Skilled Engineering and Frank Hargrave

The Ballad of Les Darcy

Every effort has been made to acknowledge and contact the owners of copyright for permission to reproduce material which falls under the 1968 Copyright Act. Any copyright owners who have inadvertently been omitted from acknowledgments and credits should contact the publisher and omissions will be rectified in subsequent editions.

First published in Australia and New Zealand in 2004

This book is copyright. Apart from any fair dealing for the purposes of private study, research, criticism or review permitted under the
Copyright Act 1968
, no part may be stored or reproduced by any process without prior written permission. Enquiries should be made to the publisher.

A CIP catalogue record of this book is available from the National Library of Australia.

Front and back cover image courtesy of The Australian Picture Library

To my late parents, Lieutenant Peter McCloy FitzSimons and Lieutenant Beatrice Helen Booth, both of whom proudly served with the AIF in New Guinea: my mother at Lae, helping to put back together some of the men who were wounded in the Kokoda campaign, and my father at Finschafen and Dumpu in the actions which followed it, after he had previously served in the Middle East and North Africa.

And to all the warriors of the Kokoda Track and Milne Bay— including my father’s late twin brother, James Marsden FitzSimons, who fought in the final stages of the Kokoda campaign in the clean-up at Buna with the 2/6th Field Regiment.

Finally, I dedicate this book to the brave war correspondents and cinematographers of both sides who first documented this extraordinary saga, thus ensuring that the story can be told to the generations to come. I cite particularly the greats: Osmar White, Chester Wilmot and Damien Parer from Australia, and Japan’s Seizo Okada, who was with his forces throughout their campaign.

CHAPTER ONE: In the beginning

CHAPTER FIVE: Sweating it out

CHAPTER SEVEN: Up the bloody track

CHAPTER TWELVE: The Battle of Isurava

CHAPTER SEVENTEEN: To the bitter end

It was on a bitterly hot and humid morning on the outskirts of Port Moresby in the early days of September 1942. As sweat trickled down his exhausted, shaking arms—and occasionally to the very fingertips he was pecking at his typewriter with, the great ABC Correspondent Chester Wilmot tried to give some sense to just what it was that he had so recently seen…

One day late in August we stood on a spur of the Owen Stanleys and looked down the deep valley which leads to Kokoda, five thousand feet below. All we could see was a blanket of dark green treetops broken only here and there by the white waters of the turbulent creek at the bottom. The valley was almost as deep as it was wide and its sides swept up from the creekbed steeply and in some places precipitously. Somewhere under those treetops wound the track which leads from Kokoda up the valley and over the range to Port Moresby. And two miles away somewhere under those treetops in the dark damp forest Australian and Japanese troops were fighting desperately for the possession of this track. It didn’t look much to fight for. It was just a series of muddy footholds in the mountain side… so slippery that you had to sling your rifle and leave your hands free to grab the nearest vine or branch as your feet slid from under you… so steep that in some places you could scale the mountain face only by using both hands and both feet… so muddy that at times you sloshed through a quagmire more than ankle deep and felt the cloying mud suck your feet back at every step. That was the track they were fighting for down there…

Looking at what he had written, it was all Wilmot could do not to weep. Given his recent experience, he couldn’t even be sure that this report would make it onto the airwaves before it was quietly killed in the night by the authorities, but it changed nothing of the question that kept gnawing at him… All that valour, all that courage, all those
lives
… lost. How, how had it come to this? How was it that such a small number of Australian men without much of a military background had been thrown up against a vastly superior, superbly trained Japanese force… when the fate of Australia might very well be hanging in the balance?

In the spring of 2001, I was taken to lunch by Matthew Kelly of Hodder Headline. He came to the point fairly quickly. On the strength of the success of the book I’d written on the war heroine Nancy Wake, aka ‘the White Mouse’, he would like me to write a book on the Kokoda Track.

My answer was succinct: ‘No.’

Even though my Uncle Jim had fought on the Kokoda Track and both my mother and father had served in New Guinea in WWII, like most Australians I only had a foggy idea what the fighting along the Kokoda Track had been all about. Sure, I knew our blokes had gone up against the Japanese—and I gathered that they had done pretty well—but that was close to all I knew. Only a short time later, though, I was having lunch with my friend Daniel Petre and mentioned the Kokoda offer to him.

Daniel fired up in a manner I have rarely seen. Usually a very calm, considered kind of bloke, he was insistent. I
had
to do this book. Did I have
any
idea how extraordinary the story was, what had been achieved there? No? Well let me tell you…

In another conversation shortly afterwards with my former biographical subject Kim Beazley—a military aficionado to beat them all who, among other things, had been this country’s longtime defence minister—he said that in his view the fighting on the Kokoda Track was some of the toughest in the course of all human conflict. Kim began to add some fascinating details, reeled off the names of five books I should read to get a grasp of it, and promptly sent me two of them.

And things moved from there. Once bitten by the same Kokoda bug that had got to Matthew, Daniel and Kim, I soon embarked and have been on the case ever since. In November of 2002, I was with Daniel and sixteen mates on the Kokoda Track itself, pushing hard from Ower’s Corner to Kokoda in a little under six days and surviving, just, the hardest physical ordeal of my life. My respect for what had been achieved there by the soldiers of the 39th Battalion, the 2/14th, 2/16th and others, now knew no bounds, and though with every tortuous step up the towering Maguli Ranges I swore I would never set foot there again, I know I’ll go back, perhaps at the point when my now young children are strong enough to accompany me, and I am not too weak to accompany them.

One final thing. On the subject of the Kokoda campaign, there is a continuing discussion about whether it is the Kokoda
Track
or the Kokoda
Trail
, with many passionate adherents on both sides. It has been explored so often I won’t go into it again here, if only to say I have plumped for ‘Track’ on the simple grounds that every Digger I spoke to referred to it as that, and if it was good enough for them…

In many ways much of the ground I cover in this book has already been well covered, not only by the Diggers themselves, but by a variety of eminent historians and writers, and this book owes their exacting work a great debt. I am not an historian, and this is not a history book, but it has been their work which has either delivered the pearls I was looking for, or pointed me in the direction where I might find them.

For this book I was heavily dependent on the splendid researching skills of Glenda Lynch who was able to work the wonderful resources of the Australian War Memorial and National Library for me. (And if you haven’t seen the superb Kokoda section of the War Memorial, you should.) To her, my enormous gratitude, most particularly for finding the songs sung by the Japanese troops on the Kokoda Track and the diary entries of the 144th Regiment’s 2nd Lieutenant Noda Hidetaka. I read it and wept.

In essence, what I have tried to do in this book is to take these established points of historical fact and then join the dots, before taking out my colouring pencils, fleshing this into a story that hopefully reads at least a little like a novel. An example is my prologue about what the correspondent was feeling when he wrote his report on the fighting he had seen. Of course I cannot know for sure whether it is an accurate account of his emotions, but after two years of research, that is my best reckoning.

In his introduction to Raymond Paull’s 1958 book,
Retreat From Kokoda,
Lieutenant General Sir Sydney Rowell, K.B.E., C.B., C.B.E., wrote: ‘There is surely sufficient drama in this without clouding the issue by a discussion of the personalities of commanders, however intriguing this might be to lovers of sensation.’

For what it’s worth, I have taken the directly contrary view, trying as much as possible to fill out the personalities of some of the key and minor players to help make the story—and them—live again. Certainly, in an effort to achieve this to my own satisfaction, I have had to occasionally take out my poetic licence and, for example, postulate what the final thoughts of a man who has just been shot might have been. But as much as possible I have stayed with what is on the historical record, right down to what the Diggers nicknamed their detested cans of herring—‘goldfish’.

Gold Throne in Shadow by M.C. Planck
Because of His Name by Kelly Favor
Fated by Indra Vaughn
The Firefighter and the Virgin Princess by Jemma Harte
The Darkest Walk of Crime by Malcolm Archibald
Unraveling You 02 Raveling You by Jessica Sorensen
Protected Mate (Catamount Lion Shifters #1) by J.H. Croix
Fire & Ash by Jonathan Maberry
Spirit Prophecy (The Gateway Trilogy Book 2) by E.E. Holmes
Taming an Impossible Rogue by Suzanne Enoch
Our partner