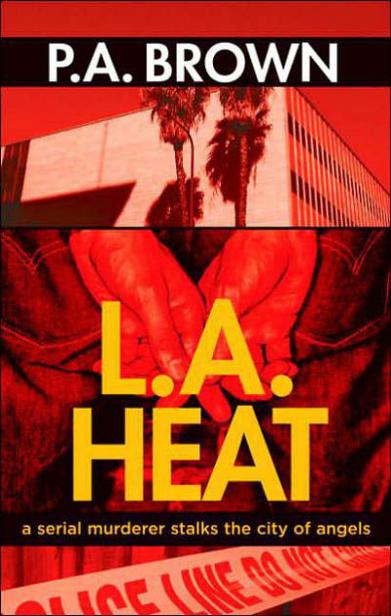 Without limiting the rights
under copyright reserved above, no part of this publication may be reproduced,
stored in or introduced into a retrieval system, or transmitted in any form or
by any means (electronic, mechanical, photocopying, recording or otherwise),
without the prior written permission of both the copyright owner and the above
publisher of this book.

This is a work of fiction. Names,
characters, places, and incidents are either the product of the author’s
imagination or are used fictiously, and any resemblance to actual persons,
living or dead, business establishments, events, or locales is entirely
coincidental.

Published in the United States
of America

To my Mother, Faith
Evelyn Brown

I wish you could
have held this in your hands

THE JOHN DOE had been dead for
days.

Flies buzzed around the corpse, crawling over
sunken eyes and up collapsing nostrils. From the doorway LAPD Homicide
Detective David Eric Laine could see the skin sloughing off of dehydrated
muscles. He held his breath against the stench. After fourteen years on the
force he figured he had seen it all. But sometimes the doers still managed to
surprise him with their brutality.

The body had been posed on its back, legs splayed
on the blood-soaked rug, hands already bagged to preserve evidence. He knew
that death had occurred somewhere else. The lack of blood anywhere but on the
carpet, and the body itself, confirmed that. Abruptly he turned away. John Doe
wasn’t going anywhere; he could concentrate on evidence the killer might have
left behind.

This was no drug buy gone sour, or a bad domestic.
The way the body lay in the hot, breathless room, empty eyes staring at a
filthy window, told him this was worse. He knew the rug had been used to carry
the body to this dumpsite. Just like the others. David felt a familiar
tightening in his gut. He had hoped they’d been wrong about the last body,
found less than a month ago in a similar state. He had hoped then that there
would be no more.

Now he knew how naïve that hope had been.

Physical damage to the John Doe was extensive.
Vivid purple abrasions marred the pale skin above the Adam’s apple and dozens
of shallow cuts covered the victim’s chest and arms.

If he was anything like the others, he had been a
good-looking youth. So how did he end up in a slumlord’s firetrap, dying to
satisfy some twisted freak’s perversions?

David smeared wintergreen under his nose and the
smell of decay faded, though he knew it would cling to him for hours, haunting
his restless sleep. Assuming he got any in the next forty-eight hours.

He pulled on a Tyvek sterile suit, complete with
plastic booties, and ducked past the crime-scene tape. Teresa Lopez, the deputy
coroner from the Los Angeles Coroner’s Office, nodded at him. A few strands of
white hair spilled from under her sterile cap and framed her lined
fifty-year-old face.

She smiled at him, but as usual he pretended not
to see the question in her eyes. He knew her interest in him was based more on
the fact that he was one of the few unattached men she met on a regular basis
rather than any kind of physical attraction. He knew only too well how he
looked. Either way, that was a road he wasn’t going to travel, no matter how
safe it might make him.

Darkness engulfed the apartment when Larry Vance,
senior technician for the Scientific Identification Division—SID—ordered the
lights cut. He scanned the floor with his handheld ultraviolet light. Vance was
little more than a trace himself. Thin and sinewy like catgut, he always seemed
to be able to insinuate himself into small places and find what others
couldn’t.

The hiss of traffic on the nearby 134 came through
the dirt-spattered window. The only furniture in the room was the threadbare
rug under the body and a single ladder-backed chair near the bathroom door.

Officer Kurt Henderson, who had been first officer
on the scene, appeared in the doorway. David nodded at the muscular black cop.
They had crossed paths before. David tried not to stare at the striking
dark-skinned black man. He kept his face neutral when Henderson nodded at him.

Henderson left. Waiting in the hallway for him to
return, David reviewed his notes. At ten minutes past midnight, the switchboard
at the Northeast Community Police Station, on San Fernando Road, had received a
frantic call. Responding to it, Henderson and his partner had found Collins in
the hall and the body in room 317.

“Mr. Collins? Detective David Eric Laine.” David
suppressed his sympathy for the traumatized man. Better for both of them if he
did this as dispassionately as possible. “I need to clarify a couple of things.
How did you come to find the body?”

“I got a phone call.” Collins said. “I checked it
out...” He swallowed and rubbed his bulbous nose. His gaze tracked around the
hallway, settling everywhere but on the open door to the apartment.

“He said the police were too slow, that I gotta
call them.”

“What time was this, Mr. Collins?”

“I always watch the news at ten... KTLA. It was
right after that was over. He told me the police had to find this body.”

“So that would have been around eleven,
eleven-ten?”

Collins’s jaws worked around something
bad-tasting. “Hey, I thought it was a crank.”

This got better by the minute. “Did you recognize
the voice? A former tenant, maybe?”

“When was the last time the unit was rented?”

“Two months.” Collins scrubbed his hand through
his thinning hair. “The last guy did a midnight run on me end of June.”

“Anyone look at the place since then?”

David didn’t pursue the non-answer. He’d get to Mr.
Collins’s evasions later. Maybe they were just the usual lies and half-truths
everyone tried when faced with suspicious cops. Sometimes he saw the lies
before they formed. Sometimes he saw lies that weren’t there at all.

“Place is unfurnished. That the way you rent it?”

“Sure, tenants gotta bring their own stuff.”

“What about the chair?”

“Must been left by the last tenant.”

Lopez, the coroner, emerged from the apartment.
Her stained Tyvek suit ballooned off her undersized frame. “We’re ready to bag
it.”

David motioned to Henderson. “Take Mr. Collins
back to his apartment. I’ll be along later to get a written statement. We’ll
get a list of incoming calls, see where our helpful friend called from. See if you
can get a list of tenants, too. Past and present.”

His cell phone rang. He held up one finger to
stall Lopez.

“Davey,” the voice on the other end said. It was
his partner, Detective Martinez Diego. No one else had the temerity to call him
Davey. “I’m stuck in traffic. Looks like a semi was dancing with a pickup out
here.” Martinez grunted. “Pickup lost.”

“Lopez just called me back in to the apartment.”

“Like our guy.” David glanced at Lopez, then
looked away from the friendliness in her dark eyes. “Same injuries. Body
wrapped in a rug.”

Martinez swore, then said, “I’m clear here. I’ll
be there in two.”

David hung up and clipped the cell back onto his
belt.

“So how’d you luck into this?” Teresa glanced over
her shoulder at the room behind them. “Spending too much time loafing at your
desk?”

“Just finished a drive-by on Drew when the
call-out came.” David gave her a thin smile. “I think the watch commander’s
words were ‘Sleep can wait. Get your ass over there now, Laine.’”

“They’re working both of you too hard. When was
the last time you went home?”

“What year is this?”

He shrugged. “Goes with the territory, right?”

Silver powder coated doorjambs and window ledges,
revealing the smudges and swirls of the usual collection of latent prints a
place like this collected. Scientific Investigation Division had set up
spotlights. Larry had replaced the UV scan with a hand-held vacuum, which he
ran over the carpet and floor, collecting and labeling bags of debris.

David scanned the room, along the walls, up toward
the unlit ceiling light, then back to the corpse, where the fly feast
continued. Then his gaze flew back to the light fixture, a simple white shield
over a single light bulb. A shadow on one side drew his eye.

David heard Martinez and one of the EMTs joking
and laughing about their respective families before he ducked past the
crime-scene tape. His Tyvek suit clung to his beefy form.

“You starting this party without me?” Martinez
asked.

Martinez, David’s partner for the last six years,
peered down at the body. “Looks like somebody let their party get out of hand.”

Teresa approached, stripping off one pair of
stained gloves and replacing them with clean ones. “You’re late, Martinez.”

“We got reporters outside. They wanna know if this
is their Carpet Killer.”

Teresa winced. “‘The Carpet Killer.’” She shook
her head in disgust. “Whatever you call him, he’s got four victims now in six
months, raped and butchered. The first one we know about was back in March.
Prolific guy.”

Martinez paced the narrow confines of the
apartment. He elbowed the bathroom open to look inside.

“He likes what he’s doing.” David looked back at
the light fixture. “Can we get a ladder in here?”

A technician entered carrying a folded stepladder
under his arm. David pulled on his first pair of thin, latex gloves and
clambered up the rickety steps. He withdrew a thin leather billfold from the
fixture.

“I think our doer likes being recognized for his
talents.” He held up the billfold. “How can we give him proper credit if we
don’t know the identity of his victims?”

Back on level ground, he flipped it open under
Martinez’s speculative eyes. The face that stared back at them from the
California driver’s license was significantly better-looking than that of the
damaged corpse at their feet, but the match was obvious.

They both looked at the chair. It had already been
printed.

A technician hurried to comply.

Fatal Attraction Vol. 2 by P.A. Jones
Timetable of Death by Edward Marston
Broken (Book 1, The Watcher Chronicles, Paranormal Romance) by West, S.J.
Coming Home for Christmas by Marie Ferrarella
When the World was Flat (and we were in love) by Ingrid Jonach
Cotton Comes to Harlem by Chester Himes
Mining the Oort by Frederik Pohl
Timber Valley Pack: Lynx On The Loose( A Paranormal Romance With Shifters) by Georgette St. Clair
Buried Biker by Rockwood, KM
The Great Betrayal by Nick Kyme
Our partner