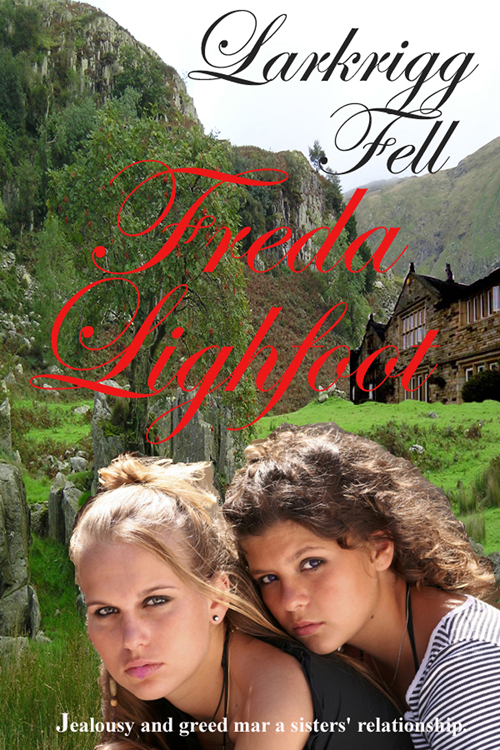 No part of this publication may be reproduced, stored in a retrieval system, or transmitted in any form or by any means without the prior permission in writing of the publisher. Nor be otherwise circulated in any form of binding or cover other than that in which it is published and without a similar condition including this condition being imposed on the subsequent purchaser. All characters and events in this publication, other than those clearly in the public domain, are fictitious and any resemblance to real persons, living or dead, is purely coincidental.

‘You can’t put a price on Freda Lightfoot’s stories from Manchester’s 1950s Champion Street Market. They bubble with enough life and colour to brighten up the dreariest day and they have characters you can easily take to your heart.’

‘Another heartwarming tale from a master story-teller.’

‘She piles horror on horror - rape, torture, sexual humiliation, incest, suicide - but she keeps you reading!’ Jay Dixon on House of Angels.

South Wales Evening Post
on The Girl From Poorhouse Lane

‘a fascinating, richly detailed setting with a dramatic plot brimming with enough scandal, passion, and danger for a Jackie Collins’ novel.’

‘A bombshell of an unsuspected secret rounds off a romantic saga narrated with pace and purpose and fuelled by conflict.’
The Keswick Reminder
on The Bobbin Girls

‘paints a vivid picture of life on the fells during the war. Enhanced by fine historical detail and strong characterisation it is an endearing story...’

‘An inspiring novel about accepting change and bravely facing the future.’

The Daily Telegraph
on Ruby McBride

The Brandon twins are unalike in every way except in their love of their home, Larkrigg Hall. Beth is the romantic one with dreams of an idyllic life in rural Lakeland. Sarah is willing to take risks to achieve the life style she craves. But jealousy and greed mar their uncertain relationship so that when tragedy strikes both sisters are forced to come to terms with a very different situation. Sarah goes off to Italy, Beth loses the man she loves and launches into an unplanned marriage. Facing emotional turmoil and financial ruin, Beth must learn to fight for, or lose, the things that matter most to her.

‘I think this could all be a horrible mistake.’

The two girls stood in the bare cobbled yard, a warm breeze riffling their thin shirts and blue denims, a battery of suitcases at their feet. It would have been plain to an observer, had there been one present, that they were not happy. One, rather small and softly rounded with short brown hair clipped steadfastly behind her ears, was almost weeping. The other, a mass of black curls bristling with temper, violet-blue eyes blazing, could barely stand still. She it was who had spoken her feelings in a sullen and furious pout.

A nine-hour flight, several more hours spent hanging around airports and a long, dusty train journey from Manchester caused the girls, in their different ways, to express their exhaustion and despair.

‘There’s no one in I tell you.’ Sarah hammered for the fourth time on the solid oak door. It was low with an oak lintel above and a threshwood below, leading into the ‘hallan’ or hall where animal feed might once have been stored but now was no doubt full of old coats and muddy boots. Sarah shuddered. Not her sort of place at all. What on earth was she doing here? ‘Didn’t you tell them when we’d be arriving?’

‘You can’t have done. Incompetent as ever, Beth. Don’t deny it.’ The taxi which had deposited the twins with their luggage in the yard of Broombank farm was rapidly disappearing down the long winding lane as Sarah beat on the unyielding door. Losing patience she set off round the back of the house to seek another while Beth emitted a sigh of relief, gazing about her in awed wonder. Lakeland was greeting them with one of her rare and perfect days in late May. Painted blue sky, clouds like white socks sauntering over the distant peaks, and closer at hand the soft bleating of contented sheep cropping impossibly green grass.

Broombank was looking at its best, the spiky bushes which gave the farm its name a blaze of gold on the lower slopes of Dundale Knot. Had she been more conversant with Lakeland weather she might have noticed cumulus clouds banking up on the horizon, but was too absorbed fighting the guilt which Sarah’s sulks always brought out in her.

Beth dug her toes into the cracks of the dry-stone wall and hauled herself up to sit on the flat stones on top. She guessed it was a dreadful breach of country etiquette but couldn’t resist, cupping her chin in her hands and gazing about her, drinking it all in.

She’d forgotten it would be like this. So wild, so remote, so utterly beautiful. She could feel its beauty already soothing her and wondered why Sarah could not appreciate its majesty. But then Sarah was not in the mood to think of anything but her own discomfort. When was she ever?

Yet it was she, Beth, who had the greater reason to be miserable. Less than two months ago she’d been sitting at her dressing table in a white bridal gown, hand stitched by Miss Lester of Boston, when Derry had walked in.

Beth remembered she’d been dabbing at her nose with a powder puff for the umpteenth time, since it always turned rosy when she was excited. She’d felt giddy and carefree, filled with joy, her grey-blue eyes wide and sparkling with the kind of happiness any eighteen-yearold bride would feel when she was about to marry the man she loved.

‘You don’t look half bad,’ Sarah was saying. ‘Though that dress would suit me far better. The train is a touch too long for your dumpy figure, darling, and white is not your colour.’

Beth could recall laughing at her sister’s outrageous vanity, untroubled by gnawing jealousy for once as she caught her stepfather’s gaze through the glass. She was about to laughingly beg his support, which he always readily gave to both girls in their numerous and petty squabbles, when something in his expression stopped the words on her parted lips. She could even now recall how she’d stared at him transfixed, like a rabbit caught in the glare of a searchlight.

‘It’s Jeremy, isn’t it?’ A tiny, breathless whisper, visions of some horrific car crash or similar disaster echoing in it. The room had seemed to turn ice cold.

‘I’m afraid so, my precious,’ then taking hold of both her hands told her she needed to be very brave. Yet her mind had simply refused to absorb those terrible words. When he’d stopped speaking she’d continued to sit there, a trusting smile of disbelief on her coral pink lips.

Downstairs, family and friends waited for the wedding to begin. The hum of their voices, the trill of laughter, the strains of a lilting tune as someone tinkered with the piano keys filtered through into her stunned mind. While out on the lawn, white painted chairs stood neatly in rows.

But there was to be no wedding. Not now. Not ever. Simply this dreadful humiliation.

Then Sarah had split the awful silence by calling Jeremy a Goddam-son-of-a-bitch. Saying how she would screw his balls off, rip his eyes out, kill him with her own bare hands! Beth had sat unmoving, listening to her mother’s hurrying footsteps echoing unnaturally loud on the stairs, her new high heels clicking on the pine boarding like gun shot.

They’d stripped the wedding gown from her and put her gently to bed. There was to be no glorious, loving wedding night. Jeremy had lied. He didn’t love her at all. Probably never had. Now he had gone, with some other woman.

Over the next agonising days everyone had an opinion on what she should do next. Beth, quite unable to eat, her whole body locked in a cold, despairing emptiness, had replayed every side-long glance, every hesitant expression of doubt he’d uttered in those busy weeks before the wedding. While Sarah had complained about dressmakers and Mother had chivvied flower arrangers, Jeremy had kept making cryptic remarks, saying how young he was to be considering the grand state of matrimony, that perhaps he would be no good as a husband, or take her too much for granted.

She hadn’t taken him seriously. But then everyone had been strung up about the wedding.

‘Never trust a man,’ Sarah muttered crossly. ‘I certainly won’t. I shall never marry.’ Defiantly tilting her chin to show off the perfect lines of her cheekbones and nose, as if to prove she was far too lovely to suffer Beth’s fate, were she ever tempted to risk it.

‘You mustn’t let this put you off,’ Beth had told her. ‘Men queue up for a date, don’t they? Haven’t you always been the most popular girl in our year?’

‘I didn’t say I wouldn’t find a fella, sister dear. I said I’d never marry one, or risk one jilting me.’

Beth had winced, but Sarah didn’t even glance her way as she strutted back and forth in the flower-decked bedroom, wrapping wedding gifts which must be returned, sighing from time to time over the beautiful aquamarine dress she would never now wear. ‘There’s a difference, you know. You can live with a man without a piece of paper to tie you together. Heavens, don’t look so shocked. It’s perfectly normal these days. What a prude you are.’

‘Mom would have to get used to it. Men like a sample of what they’re getting before they commit themselves. So do women. Why not? Maybe that was your mistake with Jeremy. You’re too damned virginal. And he was weak, you know, darling. If I’d crooked my little finger, he’d have jumped into my bed, quick as a flea.’

Beth didn’t attempt to deny it, or show how the imagery behind this thought could still hurt, for it seemed very likely true. Better to keep the conversation general whilst her mind desperately sought a way for her to go on living without him. ‘Don’t you think commitment is important?’

‘Commitment is dangerous,’ Sarah insisted, and stopped her packing for a moment to glare at her sister from beneath silky black lashes. ‘It makes you dependent, which must be a bad thing. For goodness’ sake, girl, pull yourself together.’

Beth had squirmed beneath her sister’s critical gaze, feeling the usual nudge of inadequacy, but, as so often, took refuge in silence.

‘And for God’s sake scintillate more. Stop being such a limp lettuce. Put a little make-up on, throw away that childish hair slide for a start. Take my advice, darling, and get yourself noticed. Flirt a little. The world is full of gorgeous men. You’ll find another. There’s absolutely no reason to pine.’

She's Having a Baby by Marie Ferrarella
All or Nothing by Natalie Ann
The Engagement Game (Engaged to a Billionaire) by Gardner, A.
Fifth Son by Barbara Fradkin
Broken Hart (The Hart Family) by Ella Fox
Beating Around the Bush by Buchwald, Art
In the Cave of the Delicate Singers by Lucy Taylor
Black Flower by Kim, Young-ha
Mailbox Mania by Beverly Lewis
Every Dawn Forever by Butler, R. E.
Our partner