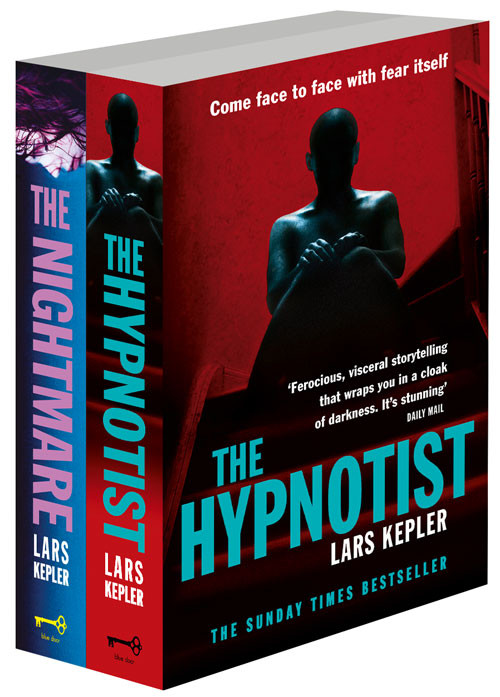 The first two thrillers in the international bestselling Joona Linna series by Lars Kepler including an exclusive preview of the third thriller The Fire Witness.

Detective Inspector Joona Linna is faced with a boy who witnessed the gruesome murder of his family. He’s suffered more than one hundred knife wounds and is comatose with shock. With a killer on the run and Linna running out of time, a hypnotist who vowed never to practice again is brought in to the investigation unfurling a terrifying chain of events.

The lifeless body of a young woman is discovered on an abandoned boat.A man is found hanging alone in his apartment.The question for Detective Inspector Joona Linna: suicide or murder?Only four people know the answer. And one man wants them dead.Can Linna keep them alive long enough to find out the truth?

THE
HYPNOTIST
LARS KEPLER
Translated from the Swedish by Ann Long

International praise for
The Hypnotist
:

‘Ferocious, visceral storytelling that wraps you in a cloak of darkness. It’s stunning’

‘A creepy and compulsive crime thriller’

‘Grips you round the throat until the final twist’

‘A serious, disturbing, highly readable novel that is finally a meditation on evil’

‘A rollercoaster ride of a thriller full of striking twists’

‘Riddled with irresistible, nail-biting suspense, this first-class Scandinavian thriller is one of the best I’ve ever read’

‘Lars Kepler enthralls readers with
The Hypnotist
, just like Stieg Larsson did with the Millennium series’

‘A breathtaking thriller, which uncovers the many unpleasant sides of the human psyche. He opens the door to a human abyss’

‘The cracking pace and absorbing story mean it cannot be missed’

‘As Nordic thrillers go, it doesn’t get more delightfully dark and existentially, satisfyingly murky than
The Hypnotist
’

‘An horrific and original read’

‘A new star enters the firmament of Scandinavian thrillerdom’

International praise for The Hypnotist

In Greek mythology, the god Hypnos is a winged boy with poppy seeds in his hand. His name means sleep. He is the twin brother of Thanatos, death, and the son of night and darkness.

The term
hypnosis
was first used in its modern sense in 1843 by the Scottish surgeon James Braid. He used this term to describe a sleeplike state of both acute awareness and great receptiveness.

Even today, opinions vary with regard to the usefulness, reliability, and dangers of hypnosis. This lingering ambivalence is presumably owing to the fact that the techniques of hypnosis have been exploited by con men, stage performers, and secret services all over the world.

From a purely technical point of view, it is easy to place a person in a hypnotic state. The difficulty lies in controlling the course of events, guiding the patient, and interpreting and making use of the results. Only through considerable experience and skill is it possible to master deep hypnosis fully. There are only a handful of recognised doctors in the world who have mastered hypnosis.

Like fire, just like fire
. Those were the first words the boy uttered under hypnosis. Despite life-threatening injuries—innumerable knife wounds to his face, legs, torso, back, the soles of his feet, the back of his neck, and his head—the boy had been put into a state of deep hypnosis in an attempt to see what had happened with his own eyes.