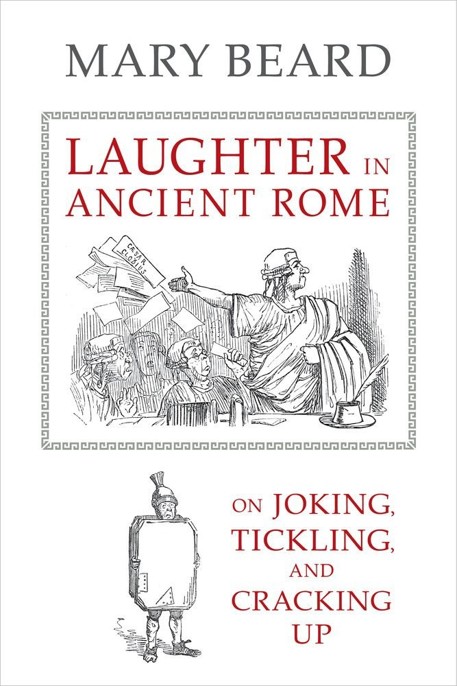 In honor of beloved Virgil—

The publisher gratefully acknowledges the generous contribution to this book provided by the Jane K. Sather Professorship in Classical Literature Fund.

On Joking, Tickling, and Cracking Up

University of California Press, one of the most distinguished university presses in the United States, enriches lives around the world by advancing scholarship in the humanities, social sciences, and natural sciences. Its activities are supported by the UC Press Foundation and by philanthropic contributions from individuals and institutions. For more information, visit
www.ucpress.edu
.

© 2014 by The Regents of the University of California

Laughter in ancient Rome : on joking, tickling, and cracking up / Mary Beard.

In keeping with a commitment to support environmentally responsible and sustainable printing practices, UC Press has printed this book on Natures Natural, a fiber that contains 30% post-consumer waste and meets the minimum requirements of
ANSI/NISO Z
39.48-1992 (
R
1997) (
Permanence of Paper
).

2.
Questions of Laughter, Ancient and Modern

3.
The History of Laughter

4.
Roman Laughter in Latin and Greek

6.
From Emperor to Jester

7.
Between Human and Animal—Especially Monkeys and Asses

When I gave the Sather Lectures at Berkeley in the fall of 2008, I had the time of my life. I hope that this book captures some of the fun we all had then in thinking about what made the ancient Romans laugh—how, when, and why Romans cracked up (or said they did).

Laughter in Ancient Rome
remains, in part, very close to the lectures as they were delivered, but in part it is very different. Each lecture focused on particular aspects of Roman laughter—from the jokes of the emperor through the “monkey business” of the stage to the sometimes learned (and sometimes silly) speculation of Roman intellectuals on why people laugh when they are tickled. I tried to weave discussion of theory and method into the fabric of these case studies—and to continue it late at night in Berkeley’s welcoming bars and cafés.

The explorations in part 2 are still recognizably (I hope) based on the lectures I gave. Those late-night discussions, however, have been adapted into a series of new chapters, which form part 1. Here I face directly some of the big questions that hover over any history of laughter—and of Roman laughter in particular. Can we ever know how, or why, people in the past laughed? What difference does it make that we barely can explain why we ourselves laugh? Is there such a thing as “Roman” (as distinct from, say, “Greek”) laughter? I imagine that most readers will start with part 1 and move on to part 2, but it is not forbidden to start by dipping into part 2 and then move back to the more general—and wide-ranging—studies in part 1.

I am trying to get under the skin of laughter at Rome. This book is not a comprehensive survey of Roman laughter (indeed I am not sure what any such survey would look like, still less that it would be feasible, interesting, or useful to produce). Instead, it is intended to be a series of encounters with—to borrow the Russian poet Velimir Khlebnikov’s memorable term—the “laughterhood” of Rome: the jokers and jesters, the gigglers and chortlers, the theorizers and moralizers.
1
It will put center stage some of the less appreciated byways of ancient literature (from the
Philogelos,
the “Roman jokebook,” to Macrobius’ learned and witty treatise
Saturnalia
), and it will try to shed new light on Roman culture and some of its bestknown classics—Virgil’s
Eclogues
and Apuleius’ unsettling novel,
The Golden Ass,
to name but two—by looking through the lens of laughter.

Inevitably,
Laughter in Ancient Rome
reflects my own interests and expertise as a social and cultural historian. I am focusing on laughter as a shifting and adaptable cultural form, whatever its human physiological roots. I do not pretend to be a neurologist, and (as several footnotes will make clear) I remain far from convinced that neuroscience is much of a help in understanding the cultural and historical variability of laughter. My focus is also, as the title blazons, on the culture of Rome rather than of Greece. But, as we shall see, classical antiquity is not easy to divide into two neat halves, one Greek, one Roman, so I am constantly in dialogue with Stephen Halliwell’s great book
Greek Laughter
(2008)—which I explicitly reference only to indicate disagreement or to highlight discussions particularly relevant to my argument. I have also remained fairly resolutely “pagan” in my focus, for which I apologize to those who would like more on the rich Jewish and early Christian debates about laughter.

My aim is to make the subject of Roman laughter a bit more complicated, indeed a bit messier, rather than to tidy it up. I have little patience with approaches that think they can explain and control the slippery phenomenon of laughter. To be honest, I am getting fed up with being told that laughter is all about power (true, but what cultural form isn’t?) or that it is prompted by incongruity (sometimes, to be sure, it is, but the hilarity of satire or slapstick is not easily explained that way). This book is a reply to some of those oversimplifications and a long-considered provocation—reminding us of the puzzling centrality of laughter at Rome and challenging us to think about Roman culture a little differently through laughter.

We start from two occasions in Rome when laughter was explicitly written into the ancient script: an encounter in the Colosseum, and a joke on the comic stage.

In 192 CE, a young Roman senator sitting in the front row of a show at the Colosseum in Rome could hardly restrain his laughter at what he saw. It was not a good moment to be caught laughing.

The emperor Commodus himself was hosting the spectacles, to a presumably packed crowd of some fifty thousand people—senators, as was the rule, in the ringside seats with the best view, while the women and slaves were squashed at the very back, high up and hardly able to see the bloody conflicts playing out more than a hundred feet beneath them in the arena. It could be that, for this particular show, some people had decided to stay away, for the story had got around that the emperor—the star of the spectacle, as well as its host—was intending to dress up as Hercules and fire deadly arrows into the audience. Perhaps this was one of those occasions when it was safer to be a slave (or female) and in the back row.
1

Rich and poor, scared and fearless, the audience needed stamina. The proceedings went on all day for fourteen days. The seats were hard, and those with money and sense must have brought cushions, drinks, and picnics. Everyone knew that applause for the emperor’s antics—as gladiator, wild-beast hunter, and god look-alike—was required. On the first day, he killed a hundred bears, “hurling spears at them from the balustrade around the arena” (“a display of marksmanship rather than of courage,” as one eyewitness tartly observed).
2
On other days, his animal victims were brought to him on the floor of the arena but safely restrained in nets, and after lunch he would follow up these beast hunts with some mocked-up gladiatorial combat (at which he was of course always victorious) before the regular fighters came out to please the crowd.

It was during these shows, which took place just a couple of months before Commodus’ assassination on 31 December 192, that our senator nearly burst into laughter but managed to disguise the telltale signs of mirth on his face by plucking some laurel leaves from the wreath he was wearing and chewing on them hard. Or that is what he tells us in his own account.
3

The senator in question was the historian Cassius Dio, whose family—originally from Bithynia, in modern Turkey—had been active in imperial Roman politics for generations.
4
Dio himself became a leading player in the political life of the early third century CE: he was consul for the first time in around 205, during the reign of the emperor Septimius Severus, and again in 229, as the colleague of the emperor Severus Alexander; among other appointments, he served as governor of the provinces of Africa, Dalmatia, and Pannonia. But he is now better known as the author of an eighty-volume history of Rome, written in Greek, covering the period from the mythical arrival of Aeneas in Italy up till his own day, well over a millennium later, in the third century CE—and it is in one of the later books of this history that we learn of the stifled laugh. As Dio himself explains, the whole project took him more than twenty years, starting in the late 190s, first to research and then to write. Almost a third survives in its original form; for much of the rest (including the events of 192), we depend on more or less accurate medieval summaries of, or excerpts from, Dio’s text.
5