Read Laws of the Blood 1: The Hunt Online

Laws of the Blood 1: The Hunt 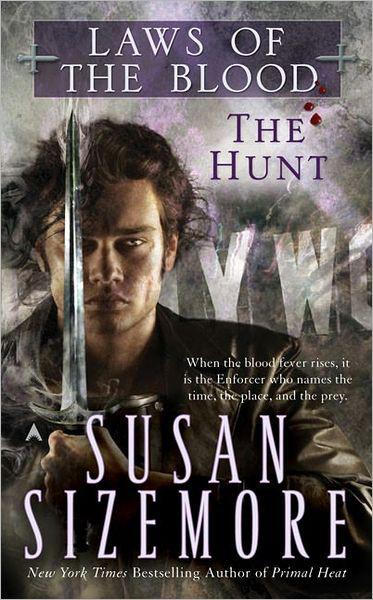 LAWS OF THE BLOOD: THE HUNT

An
Ace
Book / published by arrangement with the author

ACE
and the “
A
” design are trademarks belonging to Penguin Putnam Inc.

This one’s for me. So there.

When the blood fever rises, it is the Enforcer who names the time, the place, and the prey.

(Kneeling in the alley, surrounded by dead bodies. Blood everywhere.) Stares at Sam:

Nothing you’re going to remember.

Valentine snorted at the irony of what she’d said and hit the delete key in disgust. She was very good at irony. Her dialogue usually fairly dripped with it. Right now, this script didn’t drip with anything, not even the fresh blood she was hoping to inject into her take on a vampire story. Everybody in town was looking to make
Scream
-alikes; even she was in on it. Teen horror with a cynical twist was staying hot. She could do cynical.

“What I don’t do is horror,” Valentine told her agent when he first suggested the production package. “
Especially not vampires.” But it was a sweet, sweet deal. After she thought about it for awhile, Valentine decided,
Oh, what the hell.
There couldn’t be any harm in it.

The kitchen wasn’t far away. Valentine was never far away from a cup of coffee. Her condo was expensive, but it wasn’t big. Just a bedroom, kitchen, and a living room that doubled as an office.

There was a basketball game on the large-screen television in her living room. She glanced at it, saw the Lakers were down by eight points, and decided it was best to work and continue to keep the game on as background noise. Problem was, she didn’t want to work. The night was flying by, and she hadn’t yet put down a word that was worth keeping. “Discipline,” she told herself. “You can do this.”

There was a terror inside her that told her she couldn’t, that she was empty at last.

She noticed the blinking light on the answering machine as she returned to her desk. She had three phone lines, but only one person had the number to the phone hooked up to the machine. She didn’t want to talk to him. She didn’t even want to listen to his messages. There had been a time . . . She almost reached for the Play button. No. It would just be recorded pleas and demands. “Reruns,” she grumbled. “And I’m talking to myself again.”

Came from being alone too much, she supposed. But everyone
knew
she was eccentric and reclusive. It added to the mystique to make people come to her. To make them want something that was hard to get. You had to use every trick you could to survive in this town.

“Get’s boring, though, doesn’t it?” she complained and marched right past her desk and onto the balcony. She could feel the accusing glow of the empty computer screen at her back. “I can’t help it,” she complained to it. “The words just won’t come.” She’d always been a storyteller. But lately . . .

The balcony was full of flowering plants and was surrounded by a high, stucco wall. She leaned her elbows on the familiar rough surface and looked at the view beyond the walled garden that surrounded the building. The air smelled of jasmine and car exhaust, just as it always did. It was beautiful here, peaceful at this late hour. For all of its location near what passed for a heart in this splayed-out city, the building where Valentine lived conjured the charm and luxury of a different era. The Bunker Hill neighborhood was an old one; urban renewal had simply caught up with it and forced it to redecorate. She had preferred it before it became trendy but supposed the newfound popularity would pass, too. She’d still be here.

She was all those things and knew it. It was time for a change. There was
something
going on, it was as pervasive as the smog around her. This restlessness was not her way. If there was one thing she hated, it was change.

She sipped coffee and listened to the song of a night bird for awhile, hoping for inspiration. Behind her, the game was getting noisy. The Lakers were making baskets. She had to get back to work. She had to put something resembling a story on disk soon, even if it was shit. She wandered to stand in front of the television, coffee cup clutched tightly in her hands. Shaq was on a rampage. Cool.

After a few seconds, Valentine sat down on the couch, attention riveted on the screen. She sat back. She relaxed. A camera panned across the crowd near the floor for reaction shots after a particularly beautiful pick and roll. Valentine sat up at the speed of light. The coffee cup dropped from her hands to crash into shards at her feet. Hot liquid splashed her legs.

But the camera had moved on to a close-up of a whooping Tom Cruise. Valentine snorted derisively.
She’d actually liked the boy in
Interview
, but it wasn’t pretend vampires that interested her just now. She desperately wanted the camera to move left again, to give her another chance at viewing someone she hadn’t seen in years.

“Had to be him,” she muttered. “What’s he doing in town? Can’t be. And who was that pretty little red-haired thing with him? How long’s he been in L.A.?” She pounded a fist on the arm of the couch. “And why don’t I ever keep up with what’s going on around here?”

Valentine smiled and rose slowly to her feet. She kicked aside broken china and ran to her desk. And what difference did any of her questions make when an idea was finally tapping on the back of her brain?

“I can do this,” she muttered, then laughed wickedly as her fingers moved over the keyboard. “Can and will. Let’s try this again, shall we, gentlemen? Davy and . . . what do I call him? How about . . . ?”

What I just did was against the Law.

(Kneeling in the alley, surrounded by dead bodies, blood everywhere):

That’s not the Law I’m talking about.

Suleiman holds up short dagger. It glitters in the glow from streetlamp.

Doesn’t hold an edge worth a damn.

Valentine had to take her hands away from the keyboard because they were suddenly shaking too much to type. She barely stopped herself from looking over her shoulder. There were no accusing eyes in the night behind her, but she could feel them anyway.

Then again . . .
She sat back in her chair and watched the words on the screen as if she waited for them to scramble, change, fly away, or catch on fire. The cursor just kept blinking, but the words didn’t change. She didn’t like the words particularly. They still weren’t right, but that was because she was trying to tell the wrong story, wasn’t it?

You know where to get one,
an insidious voice in her head told her.

Valentine shook her head. “I haven’t been there or done that for a long time.” She hugged herself and wished for a cup of coffee. Somehow, even the short distance to the kitchen seemed like a dangerous journey. She wanted to hide here in her quiet corner, unseen and unnoticed, while she quietly contemplated treason, betrayal, death, and destruction.

“The box office could be enormous.”

That is, if she found the right Dream to ride. She knew where to go to do her Dreaming, now, didn’t she? There was a reason she’d seen him sitting in the audience of the basketball game. There was always a reason when their paths crossed. Right now, she needed a savior. Maybe it was his turn to get her butt out of trouble.
It was just a story. A movie. Her job. Her life. Of no importance to anyone but her.

Valentine noticed the clock on the bottom of the computer screen. It was hours until dawn. Too bad. For the first time in ages she was anxious to get a good day’s sleep.

O
N NIGHTS LIKE
this, Don Tomas showed that he was a traditionalist of the oldest school. To get his full attention, Selim had to show him the dagger. Without any sense of melodrama, he slipped it from the sheath strapped to his arm and put it silently down on the mahogany table, the point turned toward himself. Selim rarely thought about the dagger, though he wore it every night. He hadn’t had any reason to use it for a long time. Los Angeles was a quiet town.

Kamaraju, Alice Fraser, and Michael Tancredi were at the table along with Don Tomas. The five of them watched each other in silence now that the dishes had been cleared away. The dining room’s arched doorways were opened to the scents of a low-walled garden. The soft splash of a fountain made a soothing background noise in the quiet room. Beyond the garden wall a spectacular view of the city spread out from the estate’s dizzying perch.

Considering that the people in the room rarely spent time together, dinner conversation had been surprisingly affable. Now they waited for Selim.

It was up to him to speak first, since the dagger was on the table. No one had commented on the absence of the Claremont vampire over dinner, so he rewarded their restraint by saying, “Miriam sends her regrets and apologies for not being able to attend. She has a situation that could risk our security and requested a private meeting with me later this evening.”

“You will keep us informed of Miriam’s actions.”

Don Tomas was tall but slender in the wiry, muscular way many of them were, with a low, rough voice and deep, dark eyes. He sat back in the heavy carved chair at the head of the table, half-slouching, physically relaxed while radiating an air of tightly wound tension. His words concerning Miriam hadn’t been a request, but they hadn’t been a demand, either.

Selim nodded to him. “If her actions touch upon the Hunt in any way, I will inform you and adjust tonight’s arrangements accordingly.” As usual, Selim was very careful with his words. He was best known for being a diplomat, for finding solutions and compromises among the nests. But in the matter of the Hunt there would be no compromising. The strong-willed group before him had to know from the outset that he was the final authority here. From the hard looks in their eyes he knew imposing his will wasn’t going to be easy. But, as Siri would say, he knew the job was dangerous when he took it.

Reunion with Her Alpha (Paranormal Werewolf Shifter Romance) by Wilson, Joanna
The Death of Santini: The Story of a Father and His Son by Pat Conroy
Fifty Shades of Mr Darcy: A Parody by William Codpiece Thwackery
Eeeee Eee Eeee by Tao Lin
My Demon Saint by R. G. Alexander
CLANK: A Book of Madness (Psychological Satire Novel) Unsettled Office Worker Loses the Last Screw by Draven Madpen
AHealingCaress by Viola Grace
Iniquity (The Premonition Series Book 5) by Amy A Bartol
Fallen Into You by Ann Collins
Her Unbridled Cowboy (Harland County Series) by Michaels, Donna
Our partner